This week’s Hammer of Math looks at the various Nemesis weapons of Codex: Grey Knights.

Most Grey Knight units have access to several Nemesis weapons, ranging from a pair of falchions to a stick with the option of a blade or a skull on the end of it. The profiles are as follows:

Most Grey Knights have the profile of an Astartes but trade Shock Assault for an extra base attack, giving them 3 attacks hitting on a 3+ at S4 before the weapon bonus. At 22 points it’s a pretty solid investment. For the purpose of this exercise we’ll use a Strike Squad of 5 including the Justicar, act as if the Hammerhand power was active to re-roll wounds, and assume that the Tide of Convergence is active so that every unmodified wound roll of 6 inflicts a mortal wound (to a cap of 6).

Our first series of targets are T3 units like Aeldari, Adeptus Mechanicus, and Sisters. Unsurprisingly the extra attacks provided by the pair of falchions is the most effective, but against various save characteristics we see different weapons perform better. Against the 5++ invulnerable save the force sword falls behind the halberd and warding stave courtesy of the 2+ to wound, but against power armour the bonus AP offsets the difference in strength. 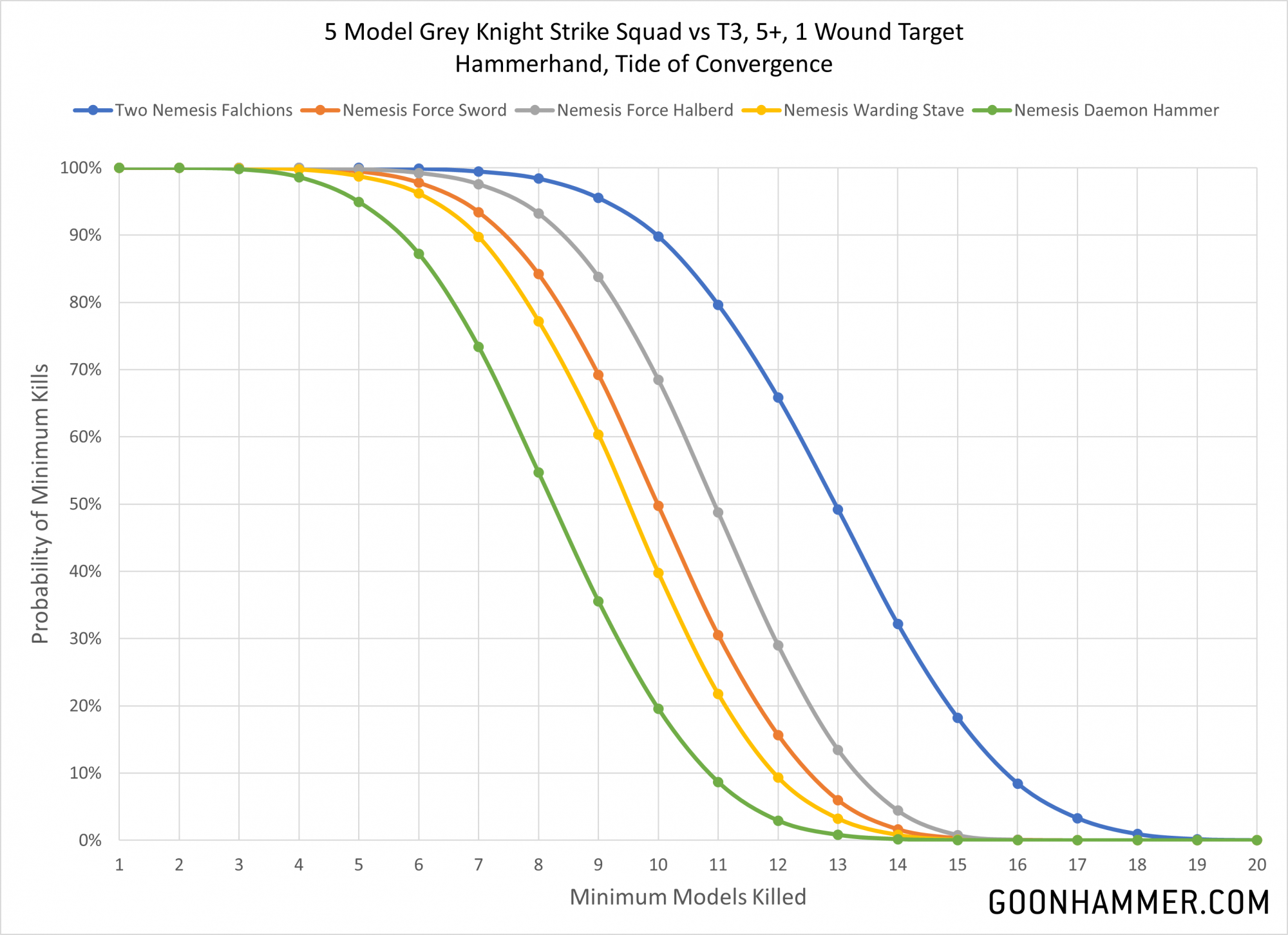 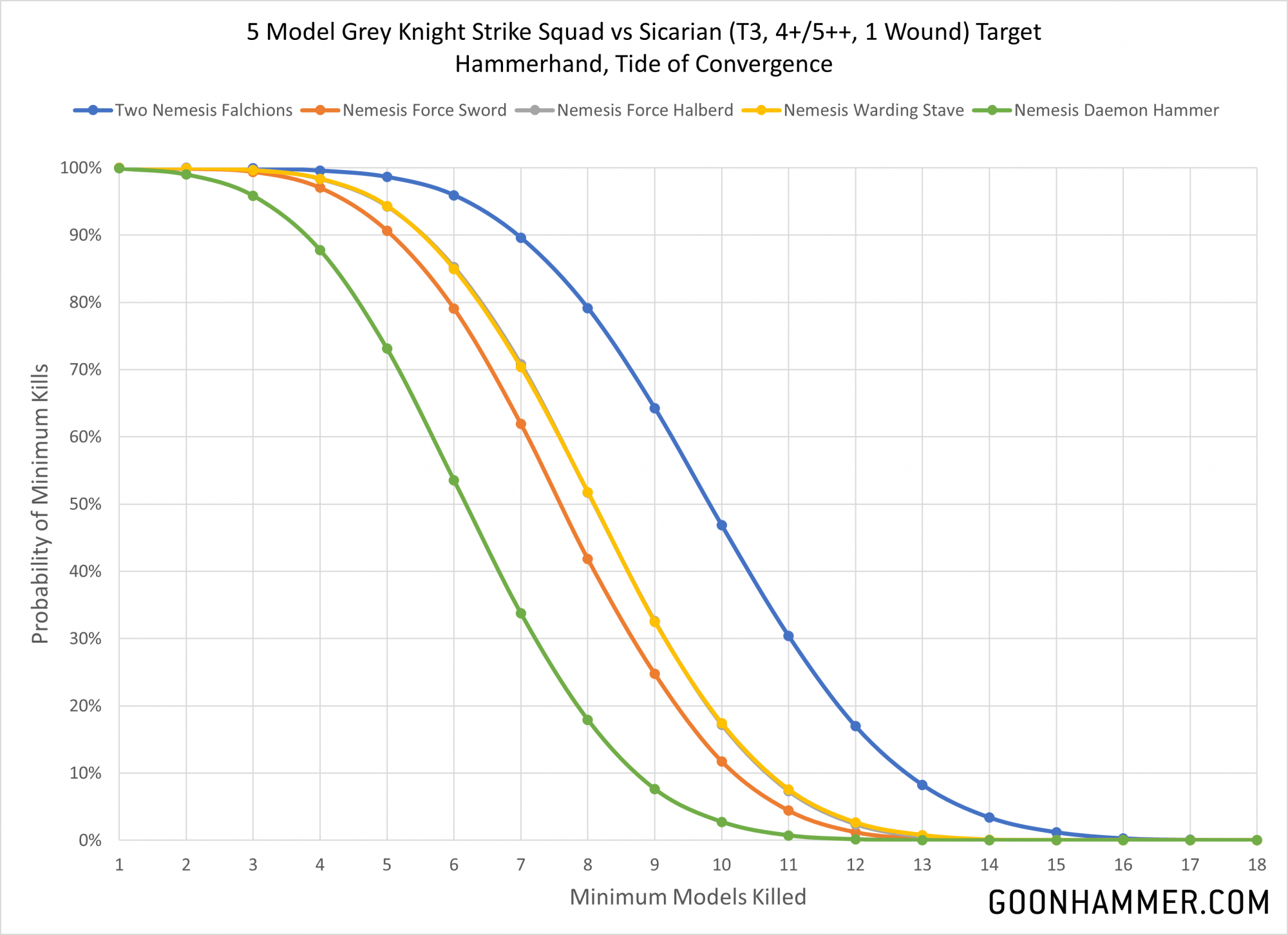 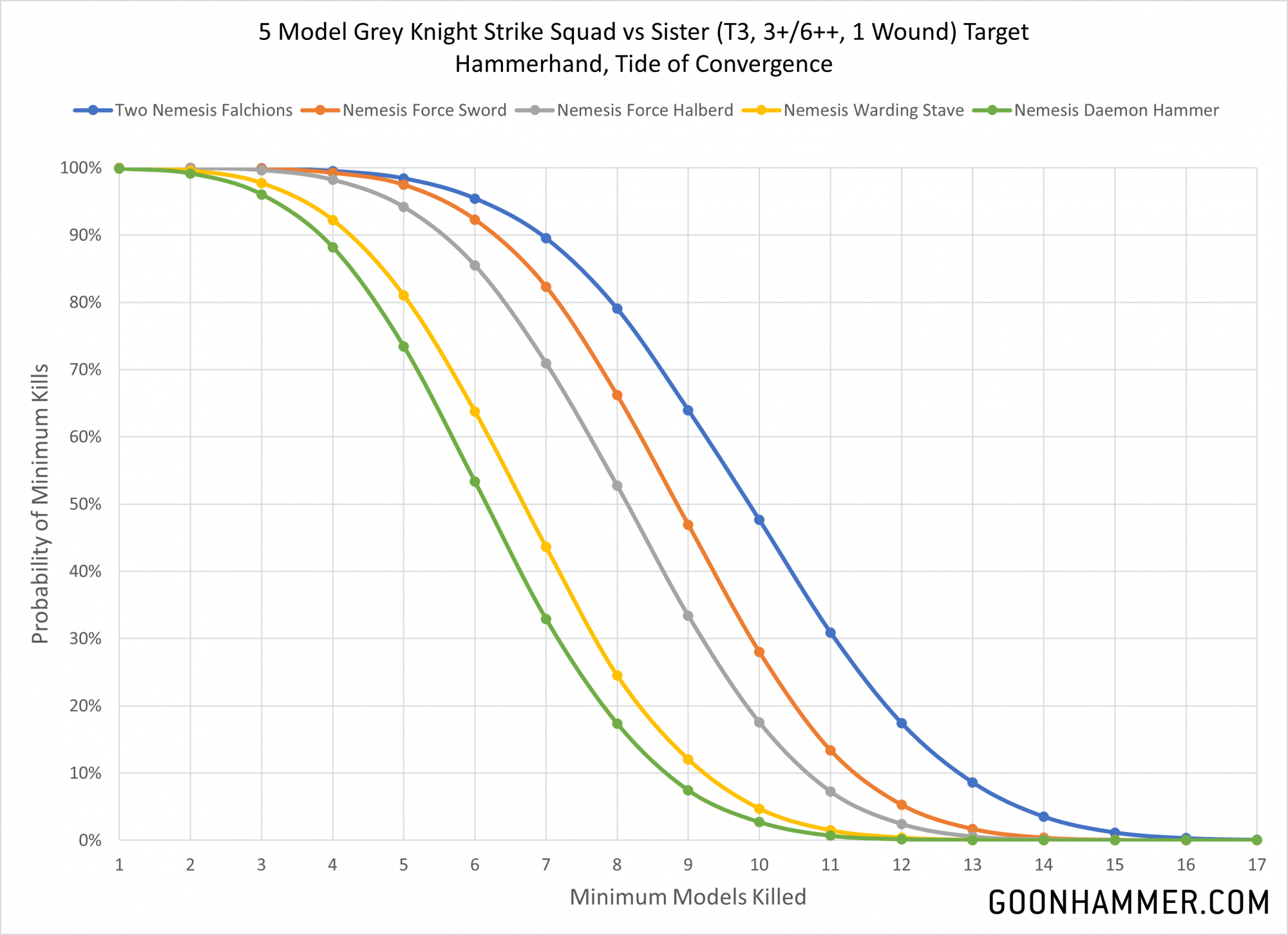 Given the prevalence of Intercessors and Gravis units in most gaming circles it makes sense to look a the various options. The force sword’s advantage with AP makes it the superior choice for killing 2W units like Marines and Intercessors, while the daemon hammer is the obvious choice when dealing with 3W Gravis units. 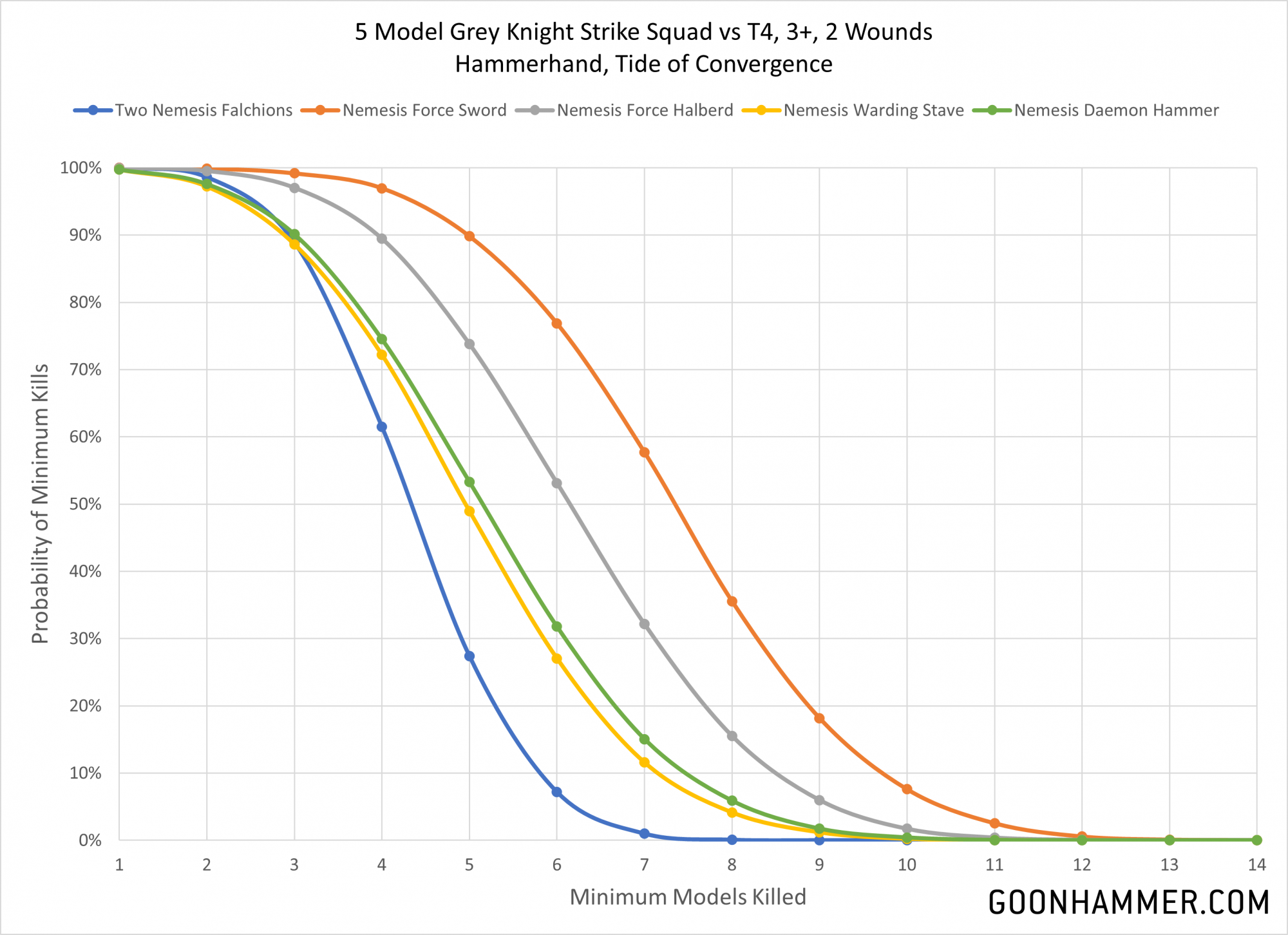 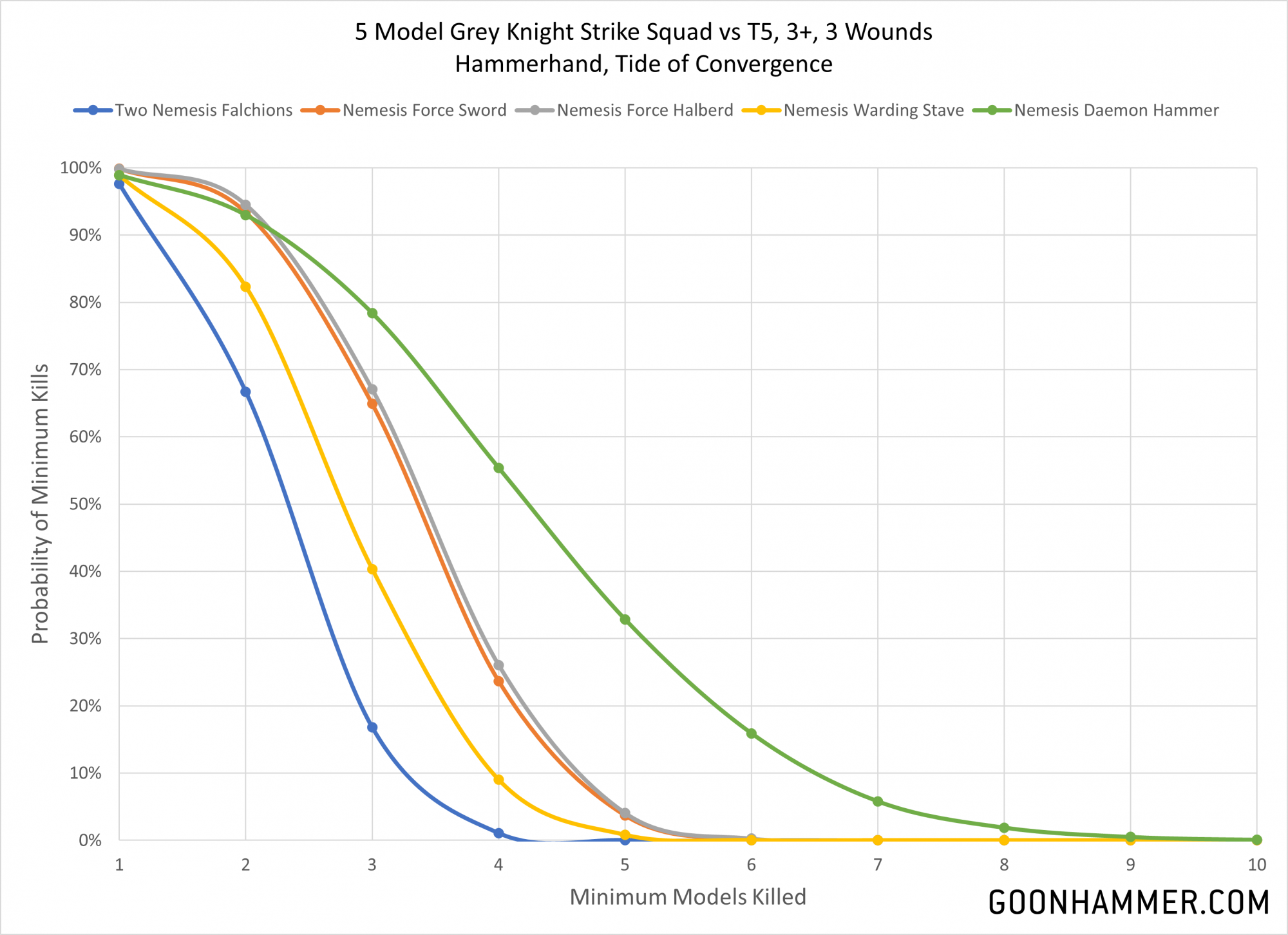 Two of the hardest things to kill are Deathwing Terminators armed with Storm Shields and Blightlord Terminators. The combination of a 2+/4++ save profile (an effective 1+ on the Deathwing, thanks to the shields) and innate abilities like ignoring wound rolls of 1-3 or reducing incoming damage make these units extremely hard to dislodge. Here things get interesting. While one would assume that the daemon hammer would deal the most damage, it doesn’t necessarily do that. In the case of the Deathwing the combination of only being wounded on a 4+ and the 1+ save means that the daemon hammer doesn’t actually wound very often when you consider it also hits on a 4+ – only 25% of your attacks will force a save, and 66% of those get saved, so the chance of inflicting that fat 3 damage is pretty low. Meanwhile the force sword hitting on a 3+ and reducing the save by a bit more means that it will damage the target more often, and while it only deals 2 points of damage the mortal wounds come into play (though it’s worth remembering that these all get inflicted at the end so there’s a chance of “wasting” damage). For the Blightlord Terminators the daemon hammer is the most effective, but the difference between that and the halberd isn’t very much. The damage reduction also has the effect of making falchions more useful thanks to the extra attacks. 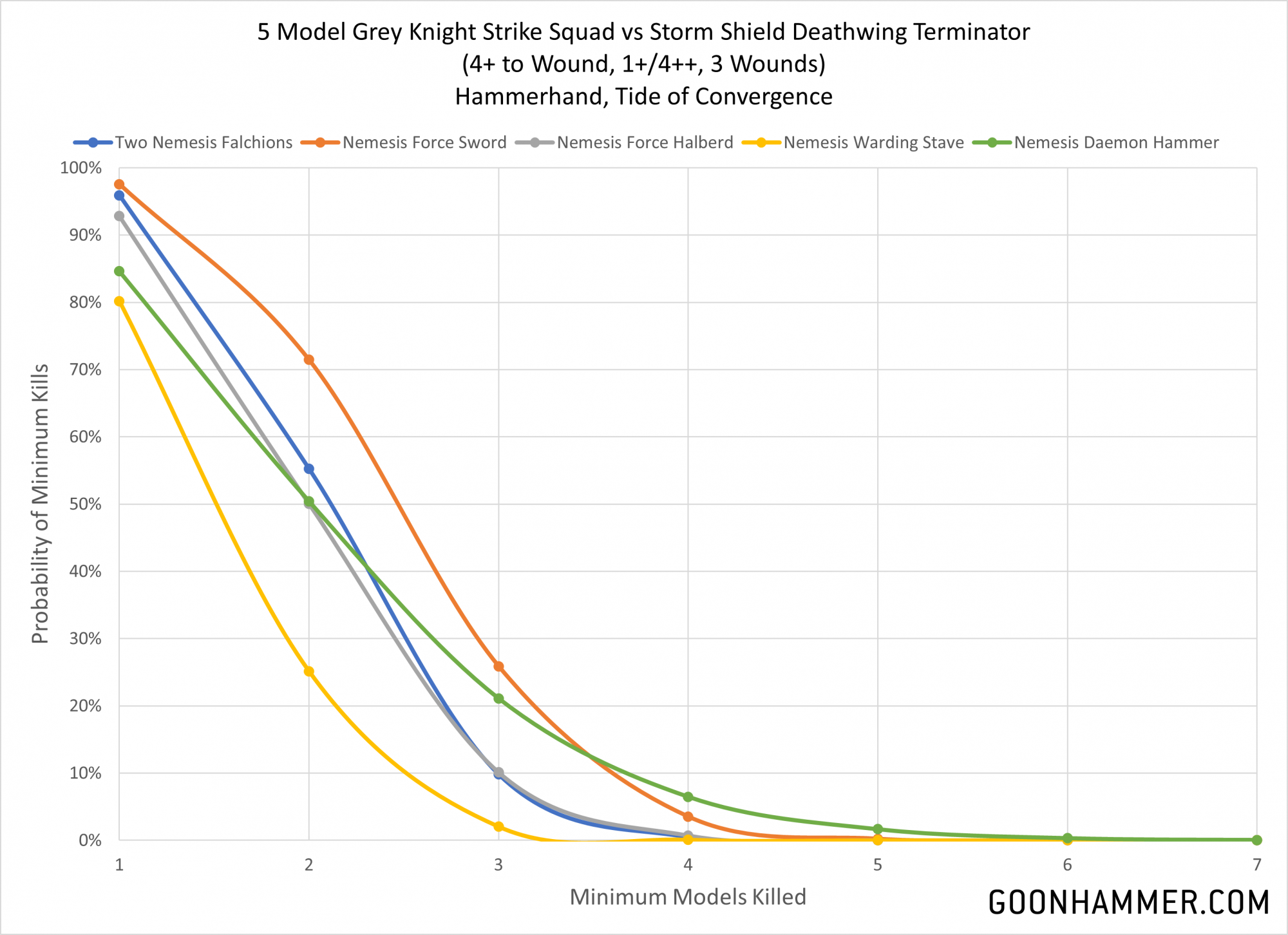 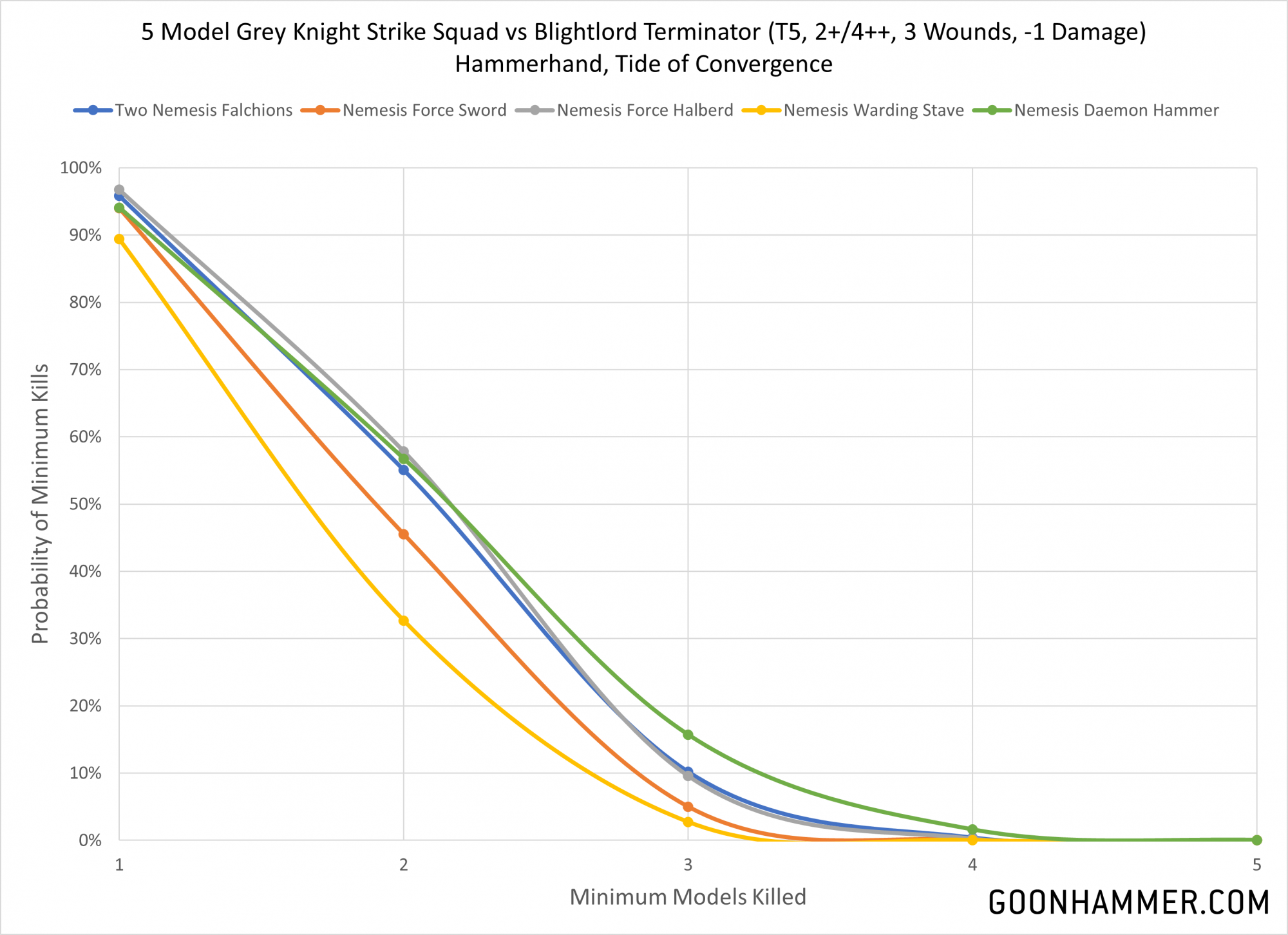 The chart above shows the average kills inflicted by each weapon against the different targets. We quickly see some very useful reference points.

If you have the choice it seems like you really can’t go wrong sticking swords on sticks. Thanks for reading! If you have any feedback, feel free to drop a note in the comments below or email us at contact@goonhammer.com. You can also reach me directly via @PrimarisKevin on Twitter.