When Blood of Baal dropped it contained a lot of interesting options for Tyranid players to explore and assimilate. In this week’s Hammer of Math, Kevin has found himself under the power of the Hive Mind, and so he’s exploring some options that players might want to consider as they build their lists in a post-Blood of Baal world.

For reasons that continue to elude me I decided to switch over to Tyranids right around the time that all of the Space Marine supplements dropped. Maybe it was the desire to paint something other than purple power armor. Maybe I needed to justify purchasing all of those Contrast paints. Or maybe I just have the hobby attention span of a gnat. Either way I started a bug army, wrote a bunch of words on what’s worked for them while Gunum corrected all of my mistakes, watched it become obsolete less than a month later, and now I’m prepping for a “Path to Glory” style campaign with ANAmel.net and Felime. So what does it all mean? It means that it’s time for some math. Bug math.

Between Tervigons, Jormungandr, flying Hive Tyrants, and a myriad of other options Tyranids find themselves at a distance of 9.01″ away from their opponents quite often. This is not a terribly great distance to be at, as the probability of rolling a 9+ on 2d6 is a meager 28%. On its own this is pretty terrible, as a key part of being good at melee is actually touching your opponent, but fortunately Tyranids have a variety of ways to improve that: 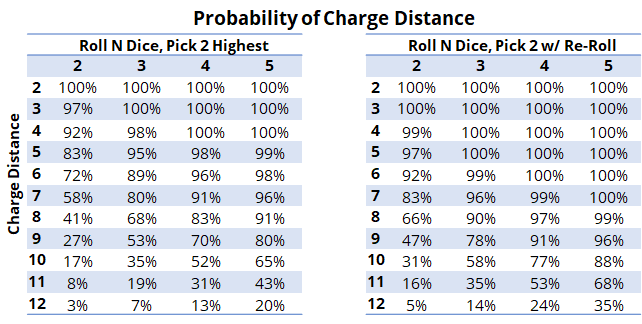 The chart above was created by simulating 10,000 rolls for each condition; because it’s not a perfect result the values may be off a percent due to rounding. This provides us with some really interesting probabilities. Potentially a unit that you REALLY want to get somewhere could be rolling as much as 4d6 (technically 5d6 if it’s a Scythed Hierodule), dropping the two lowest, and re-rolling. Assuming the attacking units meets the criteria of Hive Instinct or Synaptic Enhancement and gets 1 model within 1″ of the designated target then it could also be used to multi-charge a huge number of threats. We also see that the benefit of the Arachnacyte Gland comes into its own when combined with a re-roll; the probability of making a 9″ charge is 78%. Behemoth might be seeing a resurgence.

Tyranids got a major boost in the lethality department in the new book. Blood of Baal also provides some amazing options in the form of Adaptive Physiologies. Among other things INFANTRY units can potentially ignore AP -1 or AP -2, consolidate 2d6″, or get a +2 bonus with cover saves, and MONSTER units can get a 5+ invulnerable save, deal 1d3 mortal wounds to units that took casualties from shooting, be their own Synapse unit, or see a dramatic boost to a melee weapon. The last one, Murderous Size, is particularly nasty as it gives +1 Strength, +1 Damage, and improves AP by 1. Behemoth also got a nasty WC7 power called Unstoppable Hunger which allows a unit to get +1 to wound rolls for melee attacks, as well as a Warlord trait called Monstrous Hunger (I sense a theme) which increases damage on a wound roll of 6+ (though in general I wouldn’t use that trait as the Adaptive Physiologies are MUCH better)(. There is also the Voracious Appetite Stratagem for 1 CP that re-rolls failed wound rolls. This gives us some potentially devastating options if these abilities were applied, although I don’t expect named characters to keep the option for Adaptive Physiologies past the FAQ. 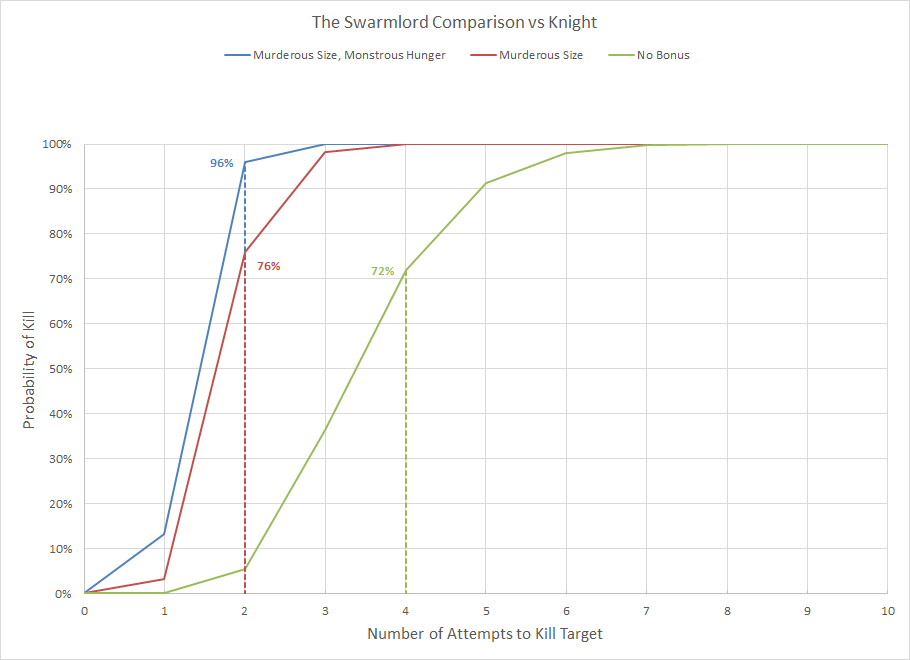 The Swarmlord would have 6 S9, AP -4, D4 attacks that wound Knights on a 2+ and deal an additional mortal wound on a wound roll of 5+. As you can see the benefit is impressive; with the right powers and Stratagems The Swarmlord has a fantastic chance of getting off a first turn charge and killing a Knight in a single turn. It would require the use of Hive Commander to move a second time and the Onslaught power to charge after Advancing, but it is feasible. Presumably the player would also want to use Voracious Appetite to increase the damage even further. 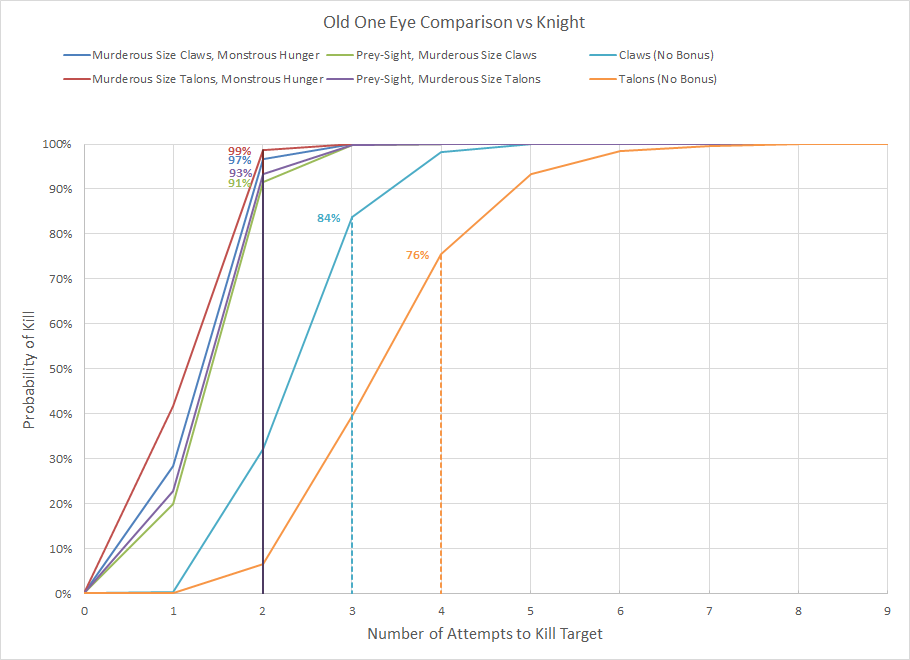 Old One Eye could be even more terrifying. He could boost his crushing claws (S15, AP -4, D4, but -1 to hit) or his monstrous scything talons (S8, AP -4, D4, re-roll 1s to hit). Against T8 the Unstoppable Hunger power would also be of use. An alternative configuration is with a custom Hive Fleet; giving him Prey-Sight would result in a +3 bonus to hit and potentially trigger extra attacks on a hit roll of 3+. As you can see in the chart above every approach provides a massive benefit over the baseline model. Given the choice I would probably apply Murderous Size to the claws, as the benefits are nearly equivalent to the talons option but do not require a power to go off. 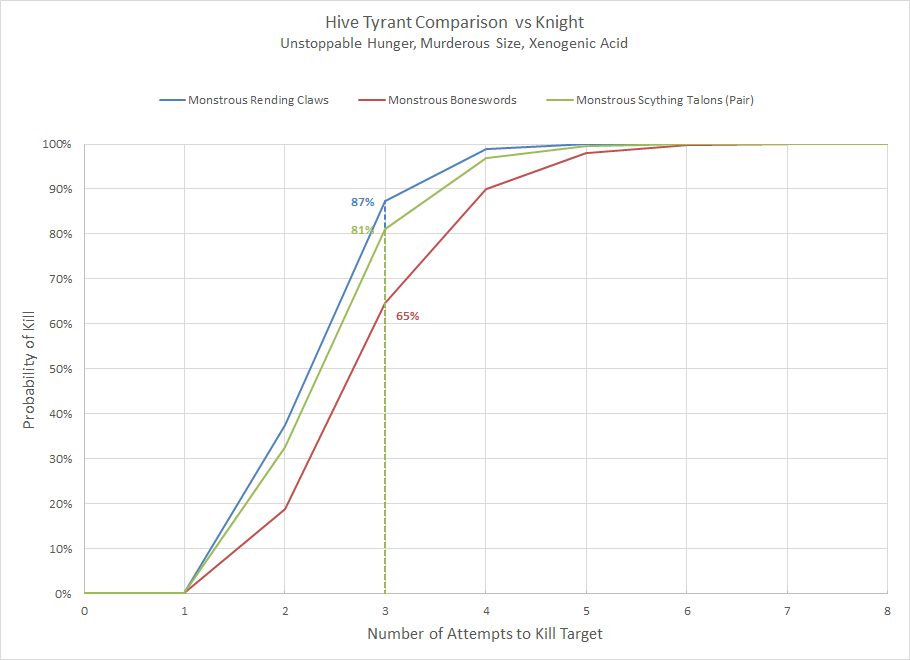 One option that hopefully won’t get FAQ’d is a boosted Hive Tyrant. With a base of S6 and 4 attacks they can be pretty nasty, especially with toxin sacs and adrenal glands to increase their damage and chances of charging the target. Assuming a Behemoth Fleet we can apply Unstoppable Hunger, Murderous Size, and for the hell of it we’ll also toss on Xenogenic Acid and deal mortal wounds on a 4+ wound roll. As you can see above the results aren’t fantastic. The best option is the Monstrous Rending Claws (which is great since they’re free), but there’s a catch. On a wound roll of a 6+ the attack deals a flat 3 damage at an AP of -6. This ignores the Damage characteristic of the weapon as as a result Murderous Size is less effective on Monstrous Rending Claws.

Games Workshop, if you’re reading this, give Tyranid players a break and don’t FAQ out Hive Fleet Adaptations from named characters. We all know the fluff is cool with it; after all they can spawn anywhere in any fleet. And from a game standpoint it gives the Tyranids a much-needed boost in the “charge forth and terrify” department, especially since even a boosted Hive Tyrant isn’t really all that scary. The sad thing is that even with all those points a boosted Swarmlord or Old One-Eye isn’t anywhere near as lethal as a Space Marine Smash Captain, and those numbers were before Black Templar and Blood Angels got their boosts. The charge stuff is fantastic though and it definitely makes Behemoth worth considering.

If you have any comments, feel free to drop a note in the comments below or email us at contact@goonhammer.com. If you have any questions that you think would be a great topic for Hammer of Math we’d love to hear about them! We have a form set up that you can submit your questions here.