One of the things that’s becoming readily apparent about 9th Edition is that the ability to take and hold objectives is a key priority. Transports, which were largely ignored in 8th Edition, are seeing a comeback as a useful means of quickly securing an objective and then providing some protection for the units inside. This week’s Hammer of Math will take a look at the various Dedicated Transports available to the Imperium (and Chaos). Next week we’ll follow up with the xenos options.

Board control has become a huge priority for 9th Edition. With 50% of victory points coming from taking and holding markers as a Primary objective, and several Secondaries also revolving around either controlling objective markers or maintaining a presence in the board, it is essential to be able to maneuver and maintain a presence. With Primary scoring occurring in the Command phase survival becomes even more essential; not only do you have to get to a location but you have to survive an entire round of your opponent doing their best to remove you. Transports have seen a resurgence under the new game. Not only do they have the ability to move significantly faster than soldiers on foot, but they can absorb a significant amount of fire and when they are destroyed the troops inside can disembark and still claim the objective. While there are many transport options available, for the purpose of this analysis we’re going to focus on units that are specifically Dedicated Transports. We’ll look at how well each unit survives a variety of attacks from a BS 3+ source.

First up we have the lowly Rhino, which is a fairly universal profile. We immediately see exactly how much of a challenge the addition of a transport adds to making a squad resilient; even the T7/3+/10W stats requires 5 half-range melta or overcharged rapid-firing plasma gun shots in order to have an even 50% chance of being destroyed. The autocannon particularly suffers from the -1 AP which allows half of the shots that manage to hit and wound to be ignored. Not bad for 78 points. 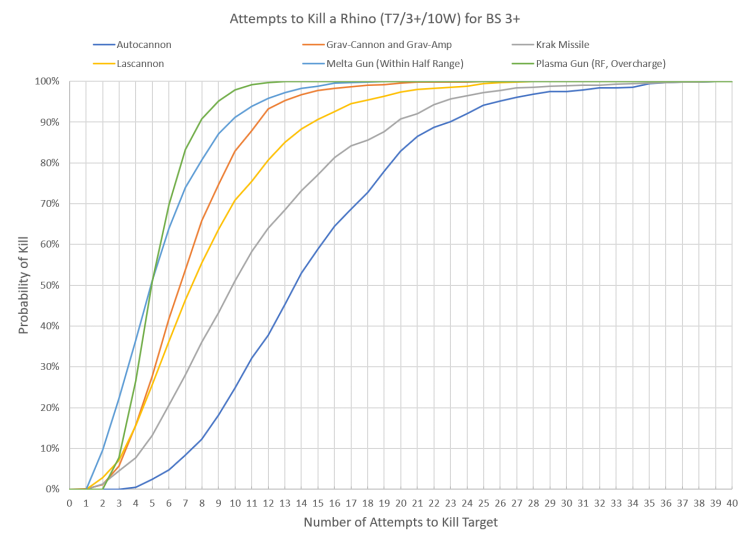 Next up is the Impulsor, and we can immediately see why these models are completely sold out. While the baseline Impulsor is slightly tougher than a Rhino thanks to its extra wound, the addition of a Shield Dome and the resulting 4++ makes this transport incredibly hard to kill. On average two full squads of Eradicators need to be at half range to kill this model. Dedicated anti-tank weapons such as lascannons are particularly poor for this system as the low number of shots makes the invulnerable save even more effective. 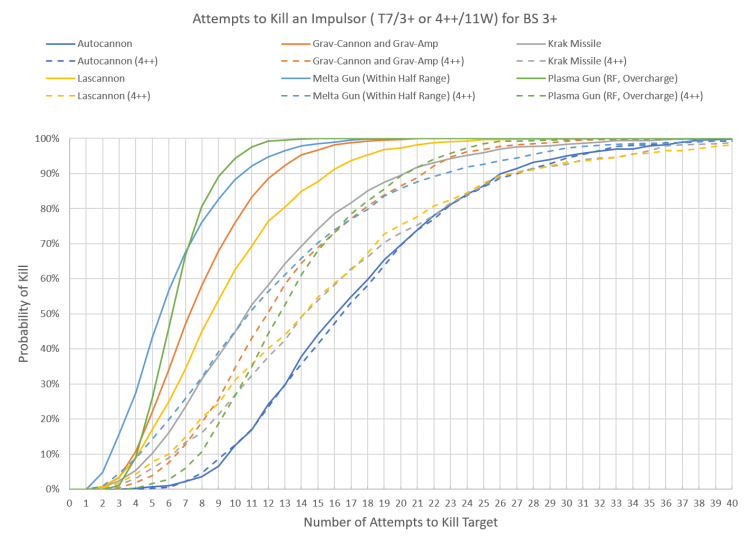 Finally we have the Repulsor, which in spite of being a massive floating tank covered in firepower is listed as a Dedicated Transport. The same stats apply for Land Raiders and Repulsor Executioners. What’s interesting is that even though the Repulsor is tougher and has more wounds, it takes roughly as much firepower as the Impulsor with a Shield Dome to kill it. In other words for 130 points you can get a dedicated transport that’s as hard to kill as a 316 point tank. Sure it doesn’t have the firepower of the Repulsor, but in an edition where securing objectives and surviving the enemy’s attack is critical that may not be a massive issue. 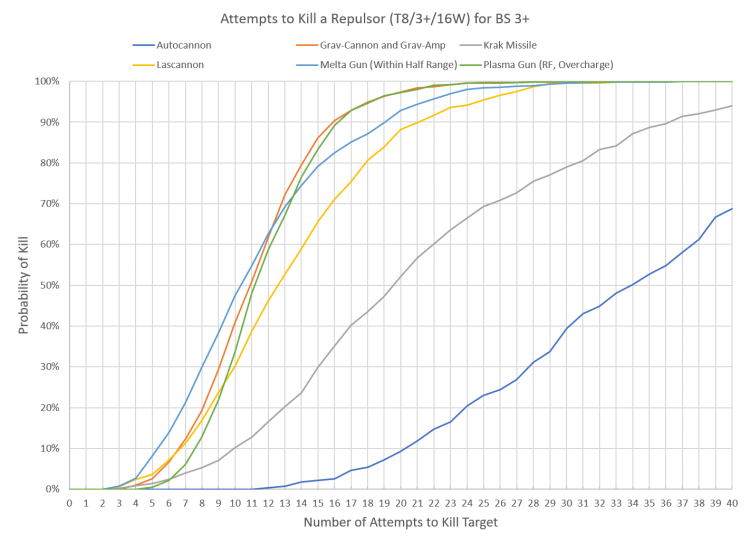 Technically our first Ad Mech unit is also available to Astartes as well. The Termite Assault Drill is a Forge World unit that can deep strike and then take advantage of its high toughness and armor save to maintain a presence. The melee options are also a fun way to potentially pose a threat in assault, making it a little more versatile. The downside is the price at between 136 and 146 points. Although the T8 helps make it more resilient than a Rhino, it’s still vulnerable to anti-tank weapons and will fall to a single Hellblaster or Eradicator squad 45% of the time. 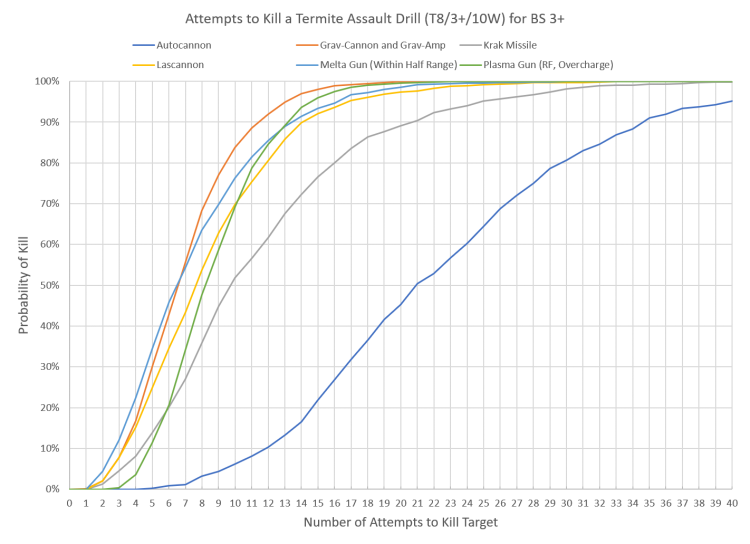 Next up is the Skorpius Dunerider at around 100 points. While the base Move characteristic of 12″ is fast, the combination of low toughness and poor invulnerable save makes this unit vulnerable to a wide variety of attacks. Given how vulnerable Ad Mech troops are this may be an area where deploying a Termite may be worth the extra points, although another option is to field multiple Duneriders and overwhelm your opponent. 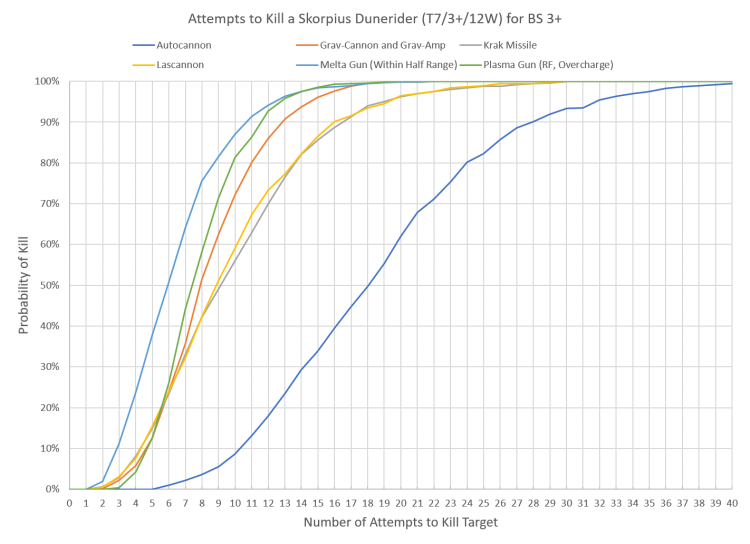 The Imperial Guard have access to two dedicated transports; the Taurox and the Chimera. From the perspective of the anti-tank weapons examined both have largely identical profiles, with only the Autocannon having a difference between the T7 Chimera and the T6 Taurox. The extra 2″ of movement provided by the Taurox doesn’t seem to be worth the loss of toughness and smoke launchers, especially since at 85 points the Chimera is 5 points cheaper than the Taurox. The profile of the Chimera is identical to the Rhino, with the extra points made up for with a larger transport capacity and better guns. All things considered the Chimera is definitely worth considering. 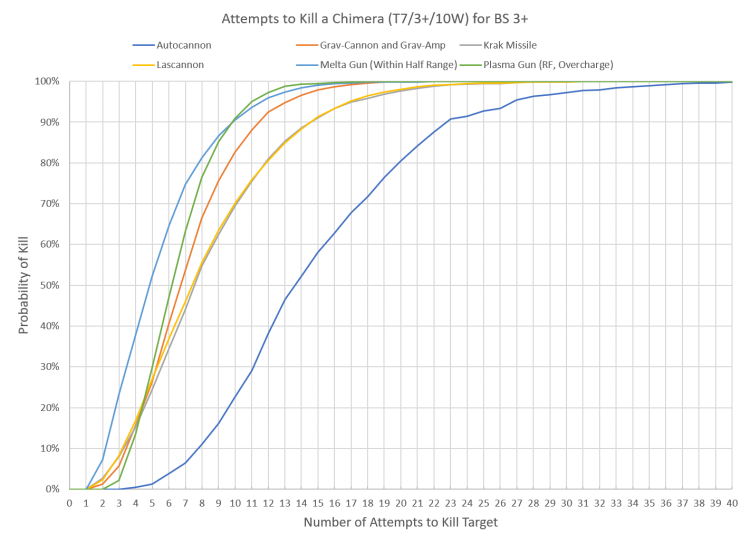 Last but certainly not least we have the ultimate in transportation for the dedicated guardians of the Emperor; the Adeptus Custodes. Clocking in at 265 points the additional value is well worth it, with nearly twice the resiliency of the Shield Dome equipped Impulsor thanks to the combination of T8 and a 5++ invulnerable save. On top of that this unit has some serious firepower in the form of a twin arachnus blaze cannon and a twin lastrum bolt cannon. Autocannons might as well not bother, and even lascannons need around 18 shots to have better than even chance of taking this beast out. 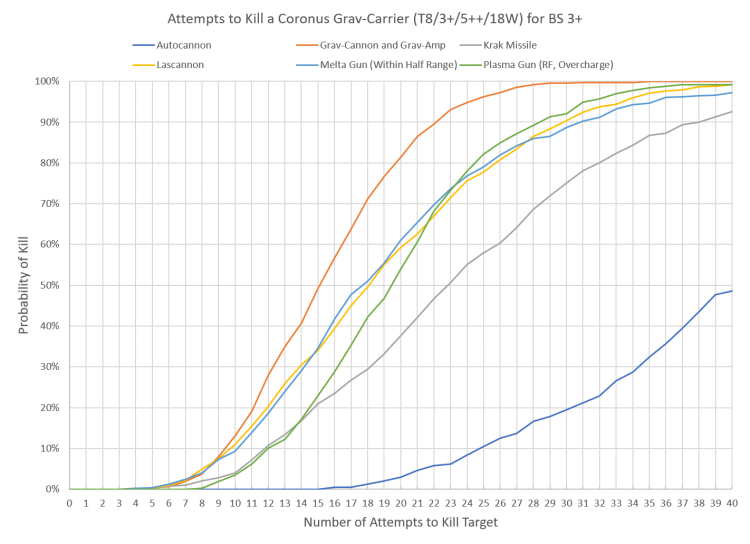 We’ll cover the xenos contingent next week, and with options such as Quantum Shielding that will provide some interesting results. For the Imperium and, where relevant, Chaos these are the major takeaways.

One additional note; Reddit user figrin1 put together a really awesome spreadsheet for examining the distribution of attacks for 40K. It’s a great resource for looking at how a particular weapon will defeat a particular target. You can check it out here.