This week’s Hammer of Math looks at the “typical” distribution of wounds dealt by several different units in Kill Team 2.0.

When we released our September Meta Review for Kill Team, one thing that immediately stood out was the efficacy of Talons of the Emperor and Custodes in particular. With a win percentage hovering near 79% it’s clear that in spite of the small model count Custodes can perform very well. In order to establish exactly how well I thought it would be worthwhile to take a look at the expected damage distributions for a selection of models and see how they compare. To do this I took the Python script I first developed for the attack sequence article and expanded it so that it would include things like mortal wounds, AP, and would also calculate the profile against a variety of saves. One of the things that separates Kill Team from 40k or other skirmish games like Necromunda is that the attack sequence is truncated to a comparing successes on offense against successes on defense. Where 40k or Necromunda require a hit/wound/save sequence, in Kill Team only two rolls are made. Since every unit in Kill Team (save one) has a Defence value of three, the attack outcomes generally fit a series of well defined curves. 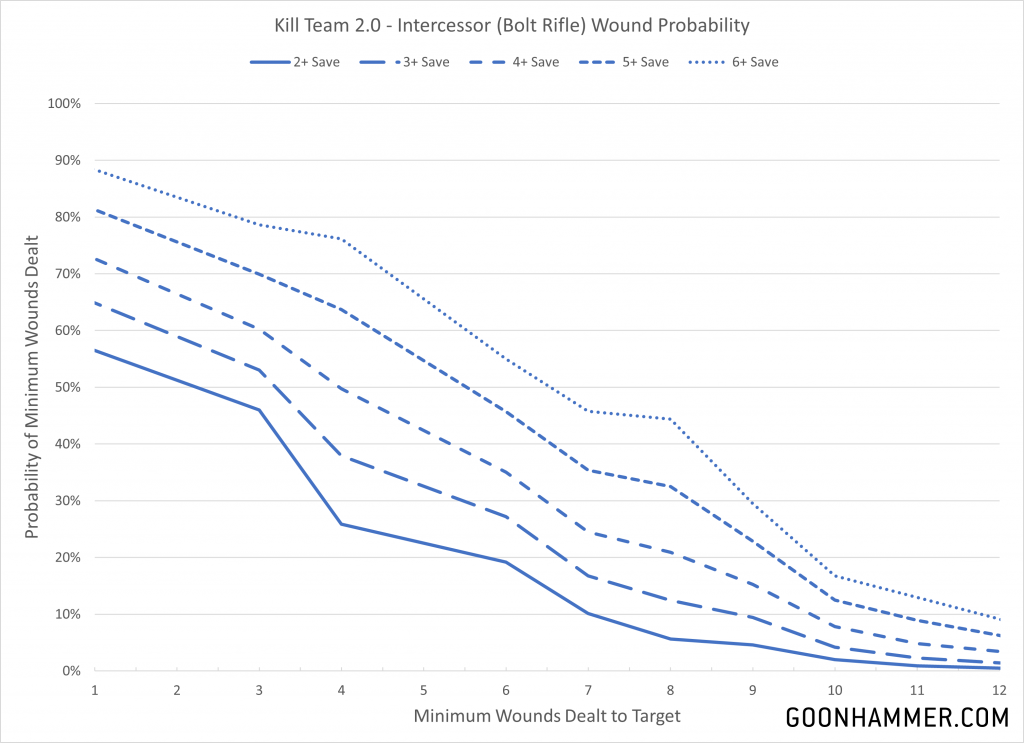 We can start with the poster child for modern Warhammer 40,000; the Primaris Intercessor equipped with a bolt rifle. The basic bolt rifle has 4 attacks hitting on a 3+ with a 3/4 damage profile and the P1 ability that reduces the Defense characteristic of the target by 1 with a critical hit. While the auto bolt rifle is a superior choice, I felt it was important to use the iconic version as the baseline. We quickly see that it’s going to take a lot of work for an Intercessor to take out most targets, as anything with a 4+ or better will take 4 or fewer wounds half the time. 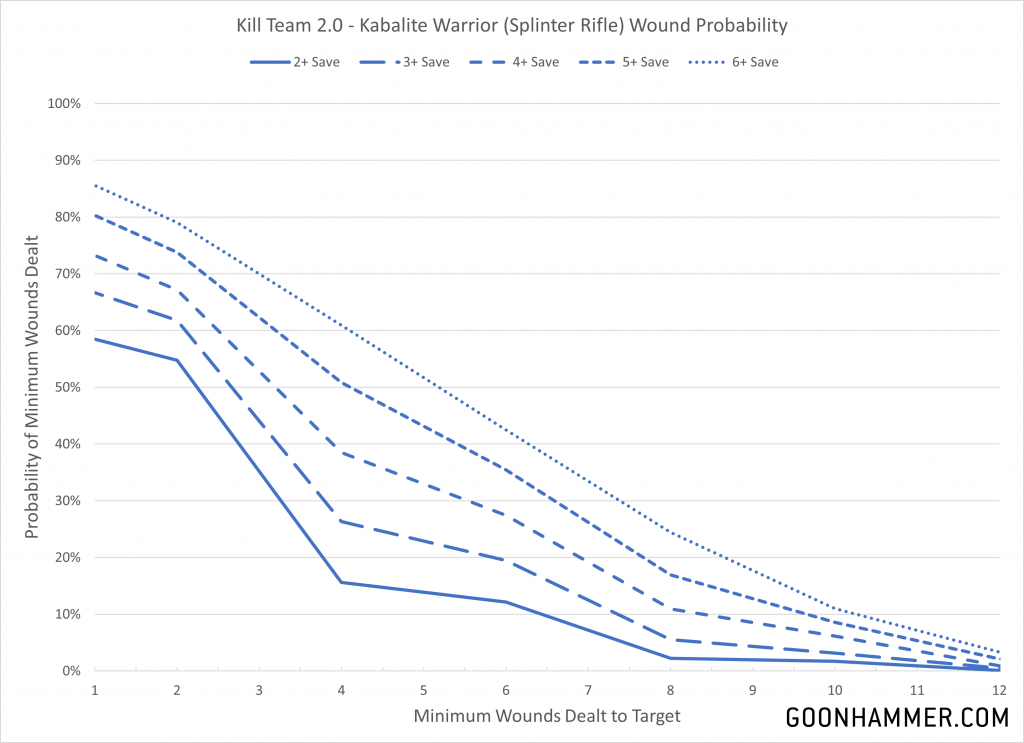 The splinter rifle contains the Lethal 5+ ability, meaning it generates a critical hit on a 5+ instead of a 6. Combined with the 4 attacks hitting on a 3+ it’s pretty likely that at least one attack will be critical, but with a 2/4 damage profile the result is fairly close to the Intercessor profile. 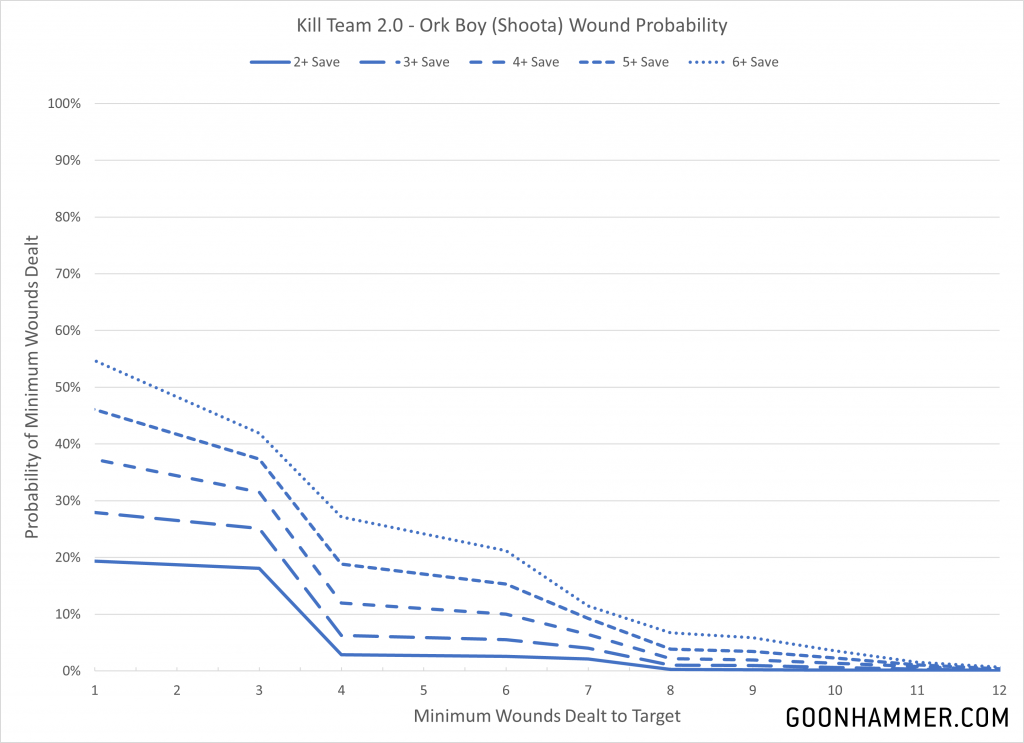 The bad news is that Ork shooting is about as poor as you would expect. Four attacks hitting on a 5+ with a 3/4 damage profile is not really something to fear. This is somewhat offset by the Dakka! Dakka! Dakka! Strategic Ploy, which allows the player to retain a failed hit as a normal hit if the attack had any successful critical hits. With 4 attacks the probability of getting at least one critical is 52%. Against the Custodes you see that 80% of the time the attack deals no damage at all. 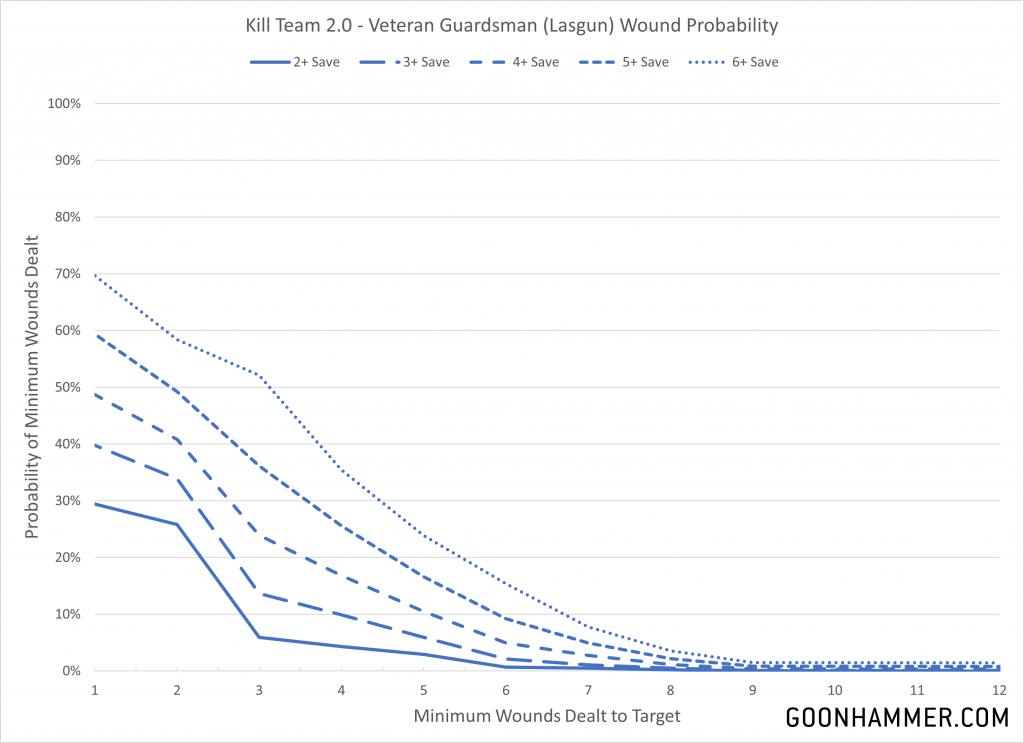 The humble flashlight performs only marginally better than the Ork boy with a shoota, particularly against lightly armored targets. The lasgun, with 4 attacks hitting on a 4+ and a 2/3 damage profile, is slightly more likely to hit the target than the shoota but at the expense of dealing less damage. Note that against a 2+ Save profile no damage is dealt 70% of the time. 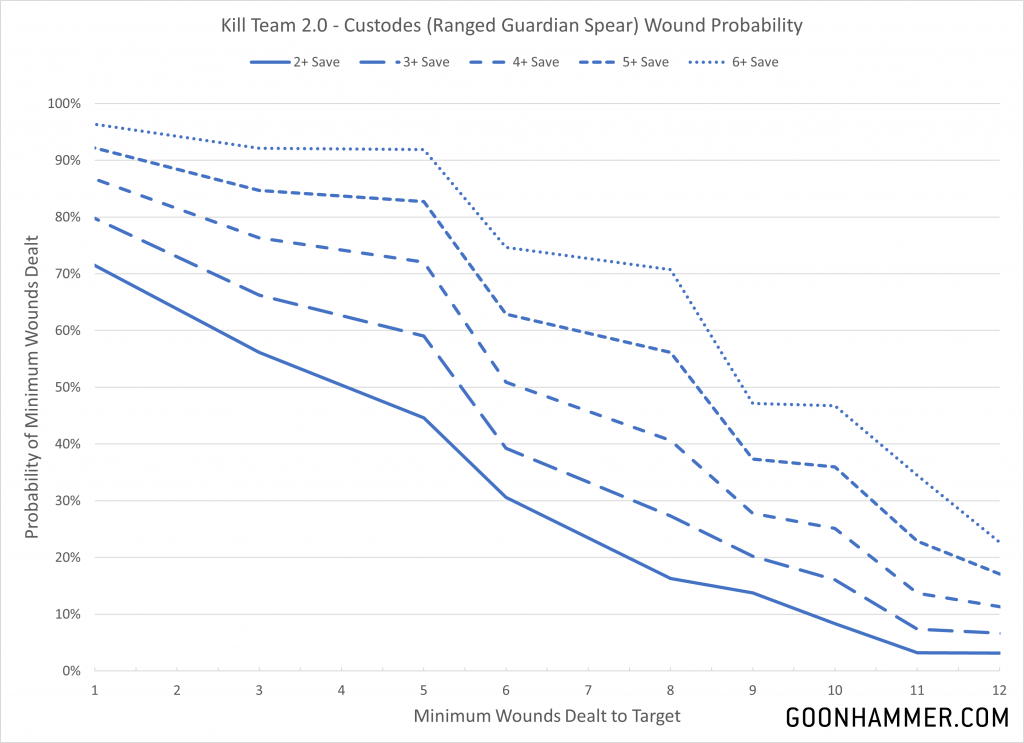 Here we see exactly how devastating the output of a Custodes is in comparison to the other baselines. With 4 attacks hitting on a 2+ with a 3/5 damage profile and the P1 ability will kill a Guardsman in one shot 60% of the time, and thanks to the Peerless Warriors Strategic Ploy every Custodes can Shoot and Fight twice. In melee they’re even more effective as they have more attacks, attack with a 5/7 damage profile, and get a critical hit on a 5+ thanks to the Lethal 5+  ability of their melee weapons. The curves above also show why armies like Drukhari have such a tough time. A Custodes will kill a Kabalite Warrior in one shot 40% of the time, but a Commorrite Kill team only consists of 10 models. There’s just not enough bodies to survive. 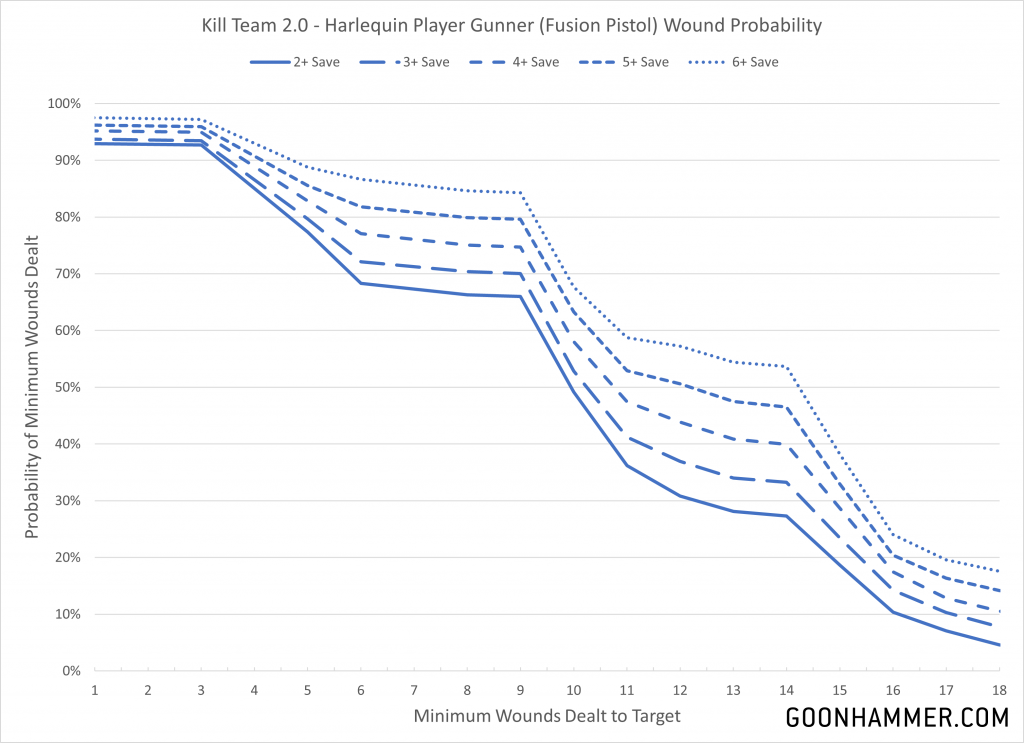 While Harlequin Gunners aren’t a standard troop unit, I thought it would be interested to look at the output of a specialized model killer like the fusion pistol. The fusion pistol is devastating thanks to the combination of AP2 and MW3, which means that most targets will only roll 1 Defence die and every critical hit inflicts 3 mortal wounds on the target. With 4 attacks hitting on a 3+ with a 5/3 damage profile the amount of damage a fusion pistol can put out is significant. 5% of the time it can even kill a Custodes in one attack.

Kill Team is still a relatively new game, and it’s pretty clear that there are still some things to iron out. One of the things that I found particularly interesting was how similar the profiles are, especially for a skirmish game. Most basic models attack with 4 dice, and essentially every unit defends with 3. This means that the damage profile, hit roll, and special rules are the key determining factors for establishing the efficacy of an attack. In this regard Custodes excel, killing some targets in a single shot while their 2+ save makes it difficult for nearly any attack to register.

Thanks for reading! If you have any feedback, feel free to drop a note in the comments below or email us at contact@goonhammer.com. You can also reach me directly via @PrimarisKevin on Twitter.