This week we continue to look at some of the ways that various factions can murder the delightfully undercosted Drukhari Raider by taking a look at several Chaos options.

If you’ve read this series so far – Part 1 on Imperial options and Part 2 on Xenos options – you have a pretty good idea that 85 points might be a bit low for a T6 vehicle with 10 wounds and a 4+/5++ save profile, particularly when the opponent fields five or more of them. The best options seem to require around three times the points to have a significant chance of one-shotting a Raider, with tank-killing specialists obviously having a particularly good time thanks to the combination of high strength and high damage for the shots that get past the invuln. Fortunately the varied forces of Chaos have several options available to make just such a thing possible, particularly with respect to Heretic Astartes.

First up we have the very loud (and very awesome) Noise Marines from the Emperor’s Children. Wielding sonic blasters and a single blastmaster, a unit of 5 will cost you 110 points. The sweet spot might be closer to 10, where you can field a second blastmaster, but you can fit as many as 20 into a single squad. Noise Marines have access to a lot of fun options to modify their baseline of 12 S4, AP 0, D1 and D6 S4, AP -1, D1 shots. They can use the classic Veterans of the Long War for 1 CP to add 1 to the wound roll, or spend another CP for Excruciating Frequencies to add 1 to the Strength and Damage characteristics of their attacks. Emperor’s Children Noise Marines in particular can leverage the incredibly powerful Endless Cacophony for 2 CP to shoot a second time, which is something we’ll see play a major role in many of these units. For a particularly crucial attack the Remnant of the Maraviglia can be used once per battle to allow all wound rolls to be re-rolled. As we see in the chart below with the proper unit size and application of Stratagems and support these units can significantly threaten a Raider. Although it takes 3 attempts for 5 models to kill a Raider with the right Stratagems, that’s easily viable for a unit of 10 and with a 70% chance of success the application of Endless Cacophony has a pretty good shot of allowing the unit to take down two targets. 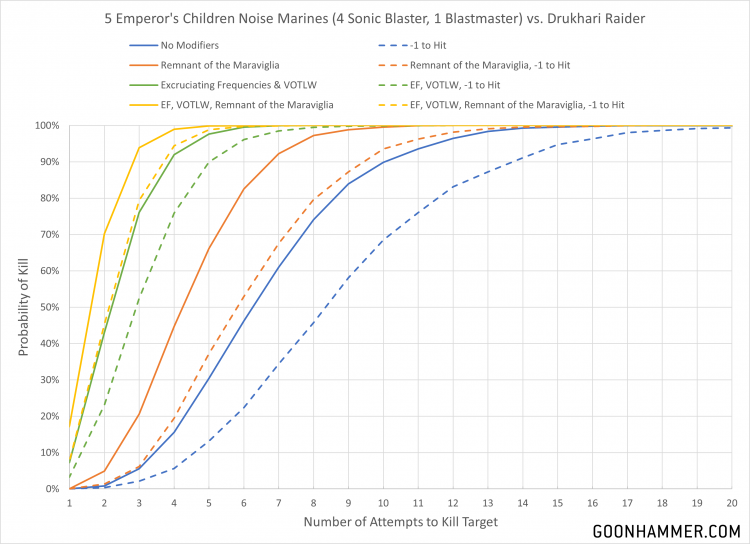 Continuing our trend of looking at nasty walking death, we have Obliterators. These hulking monstrosities are well suited for killing Raiders, as the random profile of their fleshmetal guns has no impact on the would roll or invulnerable save. A 315 point unit of 3 of them will get 18 shots hitting on a 3+, wounding on a 3+, and dealing 1D3 points of damage. In addition to being able to use Veterans of the Long War thanks to their INFANTRY keyword, they have access to the Rampant Techno-Virus Stratagem which costs 1CP to allow any D3 rolls to be re-rolled. Given the price 3 of these models are thankfully very good at killing Raiders, with two attempts allowing a very good chance of killing the target. 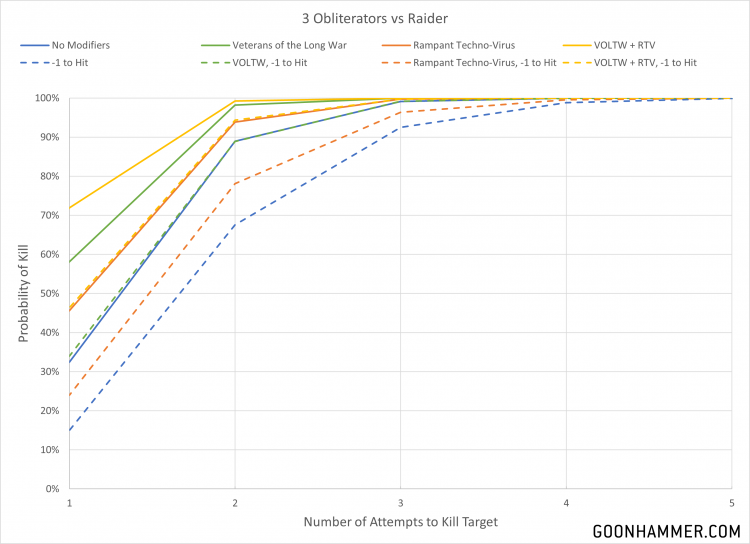 In addition to being an absolutely gorgeous model, the Decimator is able to put out a world of hurt. A pair of butcher cannons will deal 8 S7, AP -2, D2 shots. As cool as that sounds, the soulburner petard is even nastier. A pair of these weapons will dish out 4D3 shots that have a very good chance of inflicting a mortal wound on the bearer, but in exchange any wound roll of 2+ will deal a mortal wound to the target and skip the save process entirely. Particularly enthusiastic engines of daemonic carnage can spend 1CP on Daemonforge to re-roll all failed hit and wound rolls. As you can see in the chart below the Soulburner Petard is particularly brutal with Daemonforge. 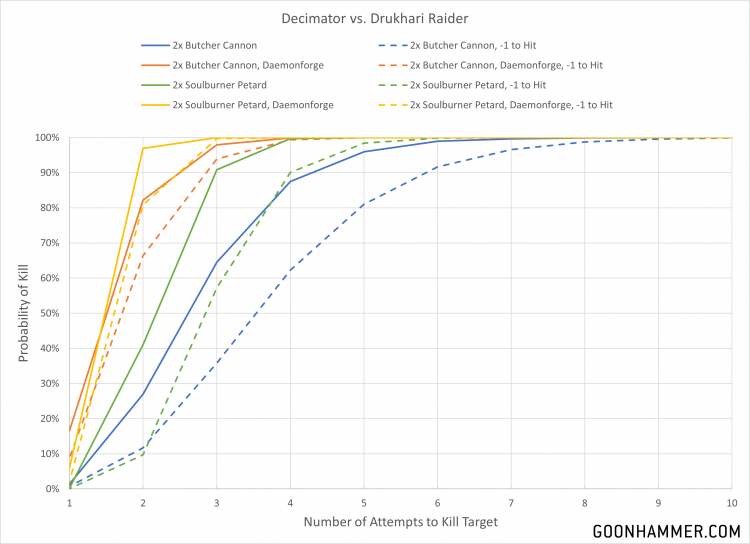 Note: A previous version of the chart above had Soulburner Petards doing much more damage in the first turn. I apologize for the error.

The Bloat-drone truly ecompasses all that Papa Nurgle has to offer. Nasty, gross, fast, and terrifying to face these flying terrors are only 130 points. Players have the option of fielding 6 S6, AP -3 D2 shots with the Plague Weapon keyword, or strapping a fleshmower to the front and inflicting 12 S7, AP -2, D2 plague melee attacks. While the heavy blight launcher isn’t terribly exciting, the fleshmower seems almost purpose-built to intercept and destroy Raiders. 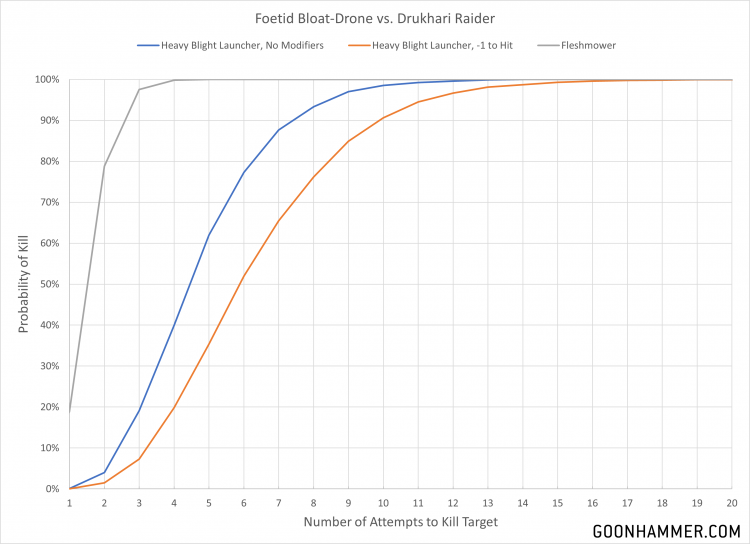 This request comes from reader David ‘Boaty’ Still, who wants to know what kind of damage a 460 point Khomentis Castigator can do to a Raider. The baseline attack with the castigator bolt cannon is 16 S6, AP -2, 2D shots. Khomentis Castigators have access to two powerful abilities. As an Infernal Household members of House Khomentis can drag themselves to the altar of their particular god and enable a Daemonic Surge to improve the Strength and Damage characteristics of a ranged weapon. All it costs is 1D3 wounds and your immortal soul. Khomentis Warlords can boost that even further with the Dread Hunter trait, which is a once per game ability that boosts the weapon Damage characteristic by 1, and also re-roll wound and hit rolls. The effect of these benefits are significant, providing a 95% chance of killing the Raider in a single attempt even with a penalty to the Hit roll. 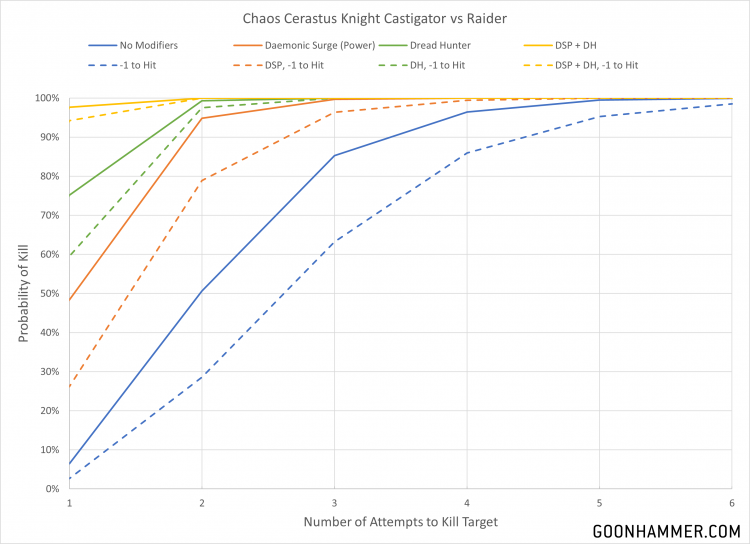 Chaos definitely has a lot of fun of nasty ways to deal with the Raider, but as usual the investment required in terms of points or CP is significant. Next week we’ll wrap up the series with an article dedicated to you, the reader. I know that there are plenty of things we could have looked at, so what I would love is for you to provide specific combinations I should look at for any faction. Use the submission link here, and please include your name if you would like a shout out in the article.

As always, thanks for reading! If you have any feedback, feel free to drop a note in the comments below or email us at contact@goonhammer.com.