Now that the content hose has died down a little bit, we’re going to revisit everybody’s favorite vehicle and look at some reader submitted threats against Drukhari Raiders. Thanks to everyone who used the submission link to post their request. If you have something you’d like me to look at, feel free to post it there!

Since we started the series Games Workshop dropped an FAQ which included a 10 point boost to Raiders. Making them 12% more expensive was definitely needed; they’re incredibly resilient for their points and do a fantastic job of getting very nasty things close to the enemy. It’s no wonder that many readers are interested in finding out all the different ways that these things can be killed, and we received a healthy number of suggestions for various ways to kill these excessively fast floating knives. All of the units below were suggested by readers, and they all have my gratitude for providing their ideas.

Many a reader noted that I omitted the greenskins from the xenos article, and I received several suggestions from synthsapiens and Kapteeni. First up are the Lootas, which seem purpose-built for murdering Raiders on account of their S7, AP-2, D2 Deffguns which can produce an incredibly nasty amount of firepower. All Orks benefit from the Dakka! Dakka! Dakka! rule, which gives an extra attack on an unmodified hit roll of 6 and guarantees that a 6 always hits. Add even More Dakka! for 2CP and the ability now hits on a 5+ instead of just a 6. Bad Moons can have even more fun with their Armed to the Teef Clan Kultur which allows for hit rolls of 1 to be re-rolled, and Showing’ Off for 2CP which allows the unit to fire a second time. The result shown below is impressive. A unit of 15 has a very good chance of killing a Raider in a single turn with the right Stratagems applied. Players also have the option to use Klever Spanners for 1-2 CP depending on the size of the unit; by replacing 1 Loota with a Spanner you can roll two D3 and pick the highest for determining the number of shots. This reduces your chances of getting a 1 from 33% down to 11%. 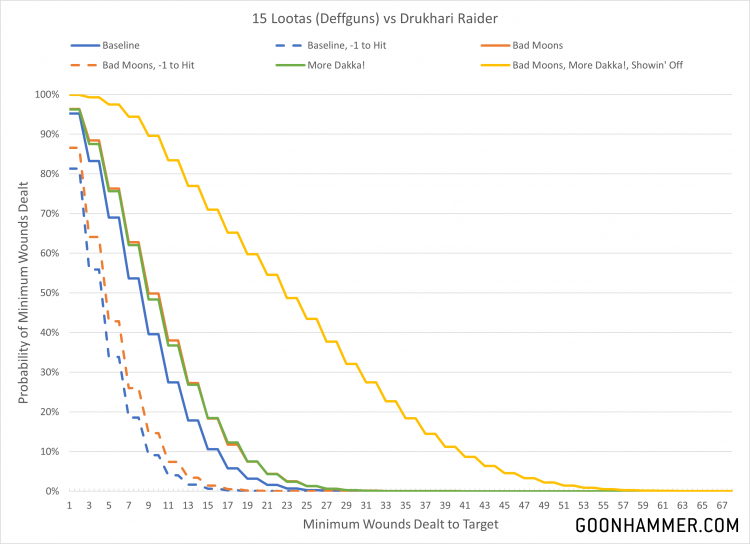 Next up we have the Tankbustas, which come with their own innate re-roll for Hit rolls thanks to their Tank Hunters ability. They have access to the same Stratagems as the Lootas, but they don’t necessarily need to be Bad Moons to get the bonus. The result is impressive; 105 points worth of Tankbustas has a 50% chance of popping a Raider on their own if they don’t have to deal with a -1 penalty to the hit roll. Toss in More Dakka! and Showin’ Off and one unit has a solid chance of killing two Raiders. Ere we go! 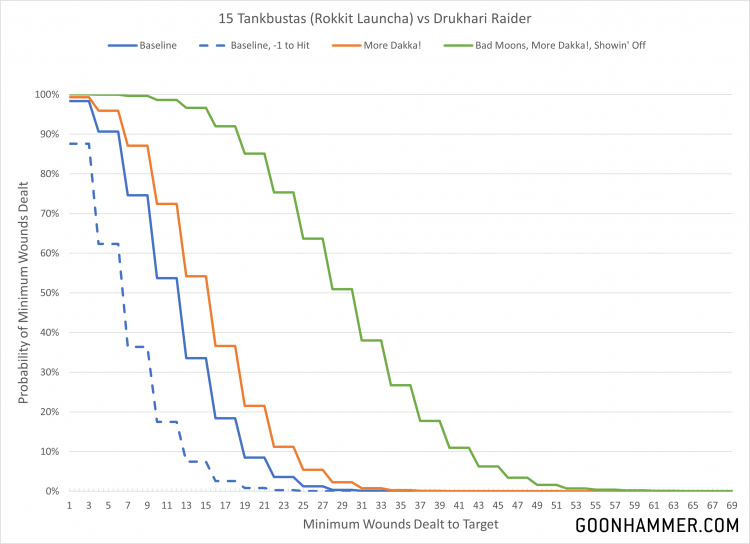 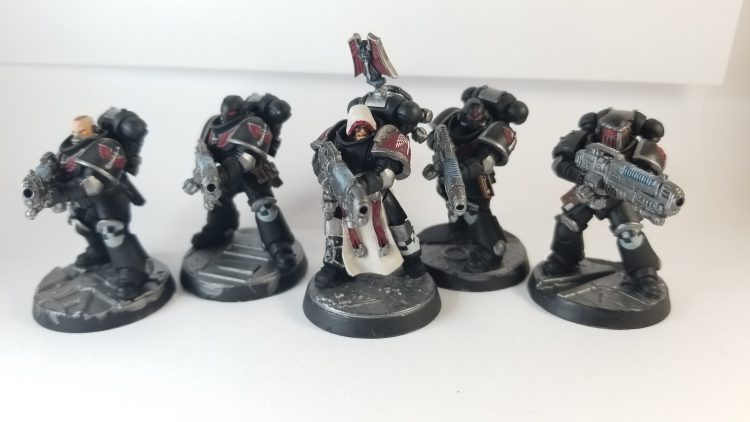 Next up we have a request from Ash to take a look at Hellblasters of the Dark Angels variety. Dark Angels have access to the Grim Resolve chapter tactic, which adds 1 to the hit roll (but sadly does not prevent the plasma weapon from overheating and killing the firer). They also have access to Weapons from the Dark Age for 2CP, which adds 1 to the Damage characteristic of plasma weapons. For this analysis we’ll assume that the Hellblasters are armed with assault plasma incinerators, as the huge number of shots makes them the superior choice. Whether or not to overcharge is often up to some debate (if you’re a coward), but this can be somewhat mitigated by adding a Captain to provide a re-roll since Hellblasters are considered CORE. Since we’re not cowards, the results below show what happens when you overcharge the plasma incinerator and bump it up with the presence of a Captain’s re-roll and +1D from the Stratagem. As one might expect from 330 points worth of Space Marines the results are pretty good, with even the worst possible scenario resulting in a 50% chance of killing a Raider. For those who don’t wish to overcharge you can simply divide the non-WFTDA results in half. 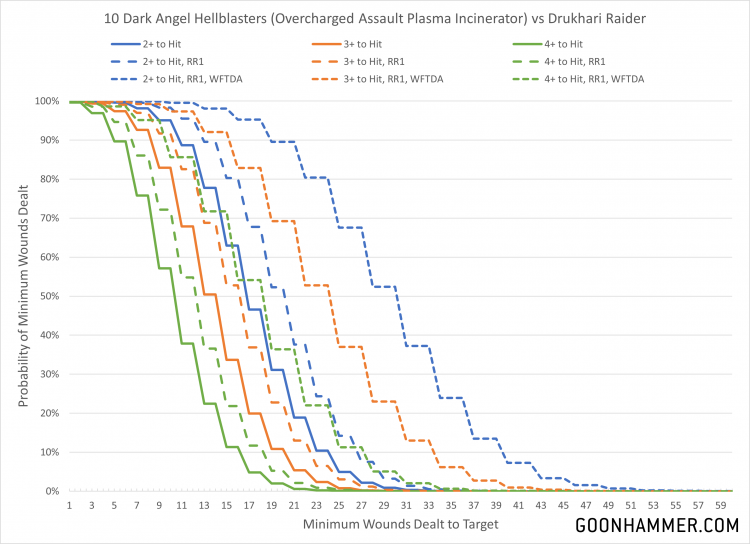 Reader Erik suggested that we take a look at mortal wound spam, courtesy of either an Exalter Sorcerer from the Cult of Magic or Ahriman himself. I haven’t done much with Psychic tests so I figured it would be fun to see how much damage one of the premier Psykers in the entire galaxy would do against a flimsy transport. Ahriman will be able to manifest three powers each phase, and could choose from Smite (WC 5), Tzeentch’s Firestorm (WC 7), Infernal Gaze (WC 5), and Doombolt (WC 9). Even with a +1 bonus to Psychic Tests courtesty of Arch-Sorcerer of Tzeentch  this will be a tough challenge, so we’ll use The Great Sorceror for 1 CP to enable a fourth power and Cabalistic Focus for 1 CP to maximize our chances of dealing 1d6 mortal wounds via Smite. AnyDice works extremely well for this so I wrote up a quick program to test it out and the results are below. Unsurprisingly the results aren’t fantastic; Ahriman has a roughly 4% chance of dealing 11 mortal wounds even after spending 2CP, although one of the neighboring Psykers would likely finish it off with another manifestation of Smite. You’re probably better off using Death Hex (WC 8) to strip off the invulnerable save or Prescience (WC 7) to boost the shooting of a nearby HERETIC ASTARTES unit. 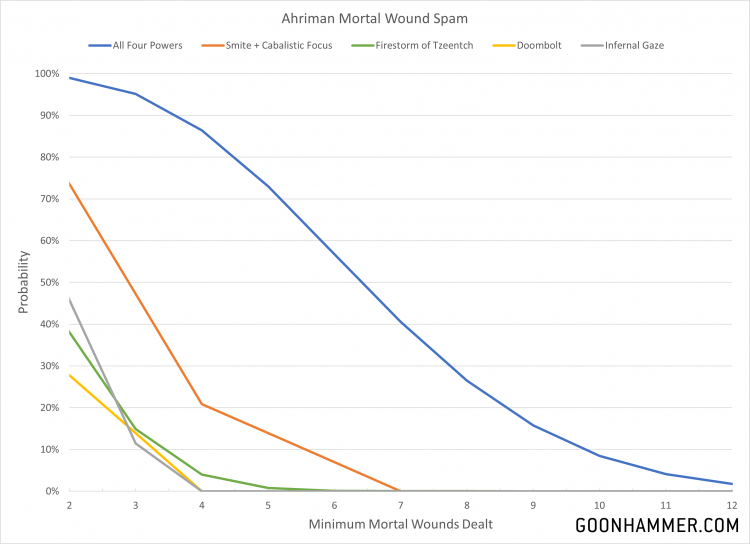 IncrediSteve suggested we look at the premier xenos killers of the galaxy; the Deathwatch. After all an entire Space Marine order under the command of the Ordo Xenos explicitly designed to slay the alien would almost certainly have no problem wiping out a paper thin transport… right? For this we’ll look at a unit of 5 Deathwatch Terminators armed with 3 Cyclone Missile Launchers. With Dedicated Transports selected as the Battlefield Role for Xenos Hunters, all wound rolls of 1 will be re-rolled. Prognosticating Volley means that for 1 CP any hit roll penalties the Terminators may take can be ignored. In terms of options a friendly Watch Master nearby could allow either all hit rolls or hit roll results of 1 to be re-rolled, and if we’re feeling particularly spicy and/or absurd we could give him a Vhorkan-Pattern Auspicator to allow nearby CORE units to get a +1 to hit against units that can FLY. Finally we could always give the Terminators the Malleus specialism to allow all wound rolls to be re-rolled. We’ll assume the Tactical Doctrine is in play to force the invulnerable saves, and that the attack is at half range. Unsurprisingly 225 points of dedicated xenos killing firepower has a decent shot of taking out the Raider thanks to the large number of shots, with a 48% chance of downing the target assuming only Xenos Hunters is active. 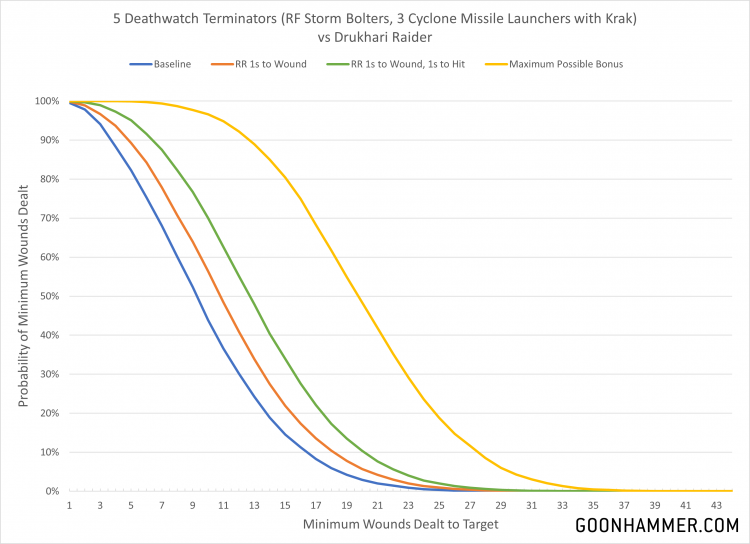 Finally we have a fun one from JHGW who asks a simple question; why not Spore Mines? Assuming you can get them in range they’re pretty nasty; if they’re within 3″ of a target at the end of the Charge phase they’ll deal 1 mortal wound on a D6 roll of 2-5 and D3 mortal wounds on a 6. At 10 points each they’re not exactly cheap, but how many would it take to kill a Raider? We’ll use AnyDice to take a look at an exact solution, and the results aren’t great. A full squad of 9 Spore Mines only has a 22% chance to deal 11 mortal wounds, which seems like an absurdly poor return on 90 points worth of models. 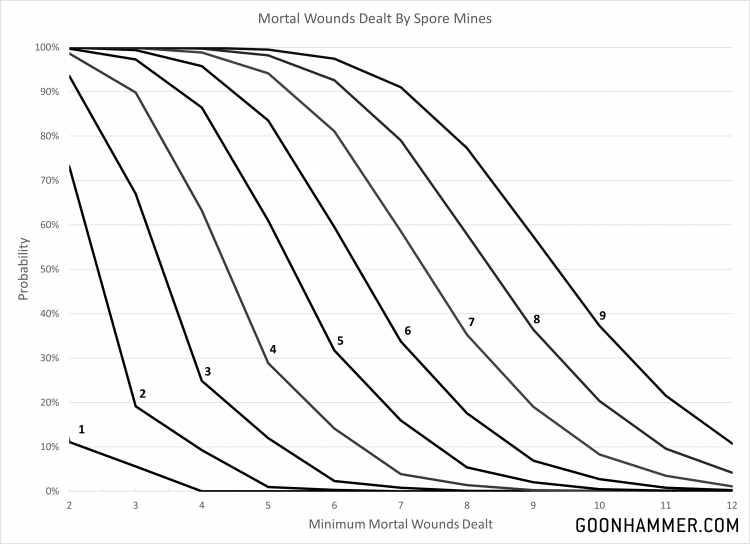