Last week we looked at the viability of killing Drukhari Raiders using several Imperial options, and this week the series continues with a selection of xenos units. I would like to thank everyone in the /r/WarhammerCompetitive subreddit for their constructive feedback and suggestions for xenos units to look at.

One of the most difficult aspects of analyzing a game like Warhammer 40,000 is establishing an idea of what a good metric is. This is particularly true when considering points efficiency. What makes a good sample set for determining how effective something is at killing or being killed? What exactly is “good enough” in the context of probability? The most common value used is the average result, but that doesn’t take into account variability. By that metric a weapon which deals 2D6 damage is equal to a weapon that deals a flat 7 damage. One of the biggest criticisms we received from last week’s article was the decision to select a 95% probability as the metric. It’s perfectly understandable; that’s a very high bar to achieve. We chose that number based on the fact that Drukhari players are already very much aware of how effective Raiders are and field quite a few of them. Most of the Top 4 Drukhari on 40KStats contain at least five Raiders, and several field six. Since they’re transports, it’s also important to understand that half measures are useless. If the Raider can deliver its cargo to the target then it has done its job. That said we also provide the graphs so that readers can make their own decisions about what the appropriate number should be.

The 170 point Exocrine with its bio-plasmic cannon is a mainstay of many Tyranid armies. With (typically) 12 S7, AP-3, D2 shots that hit on a 3+ that can be enhanced with extra damage thanks to Pathogenic Slime for 2CP it’s useful against a variety of threats. Kronos is particularly useful with re-rolling hit rolls of 1 when the unit doesn’t move and the Symbiostorm power which generates an additional hit on a hit roll of 6+. Because the Tyranid book is old GW hasn’t yet updated the effective to be unmodified rolls of 6, so the immobile Exocrine will get the additional hit on a 5+ assuming the Drukhari player doesn’t force a penalty to the Hit roll. You’re looking at around 2-3 attempts to achieve the 95% threshold, but in general the sheer number of shots and high damage make these units particularly ideal for taking out Raiders. 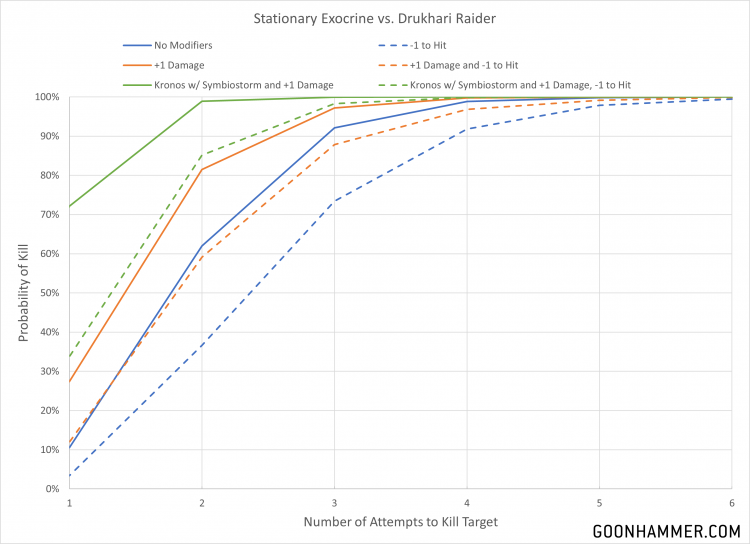 Hive Guard are another feature of many Tyranid lists, featuring a unit that fires 2 S8, AP -2, Dd3 shots which do not require LOS to hit the target. They can benefit from the Kronos ability and Symbiostorm (though here that will not work at all if the Raider has a -1 to Hit penalty), but also have access to Single-Minded Annihilation for 2CP which allows the unit to fire a second time. A unit of six with Impaler Cannons is 270 points. As with the Exocrine the Hive Guard perform very well, dealing a lot of damage and having a solid chance of killing the Raider in a single turn when SIngle-Minded Annihilation is applied. Realistically you’re looking at around 3 attempts to achieve a 95% confidence, but with no hit penalty a single unit firing twice will achieve it 65% of the time. 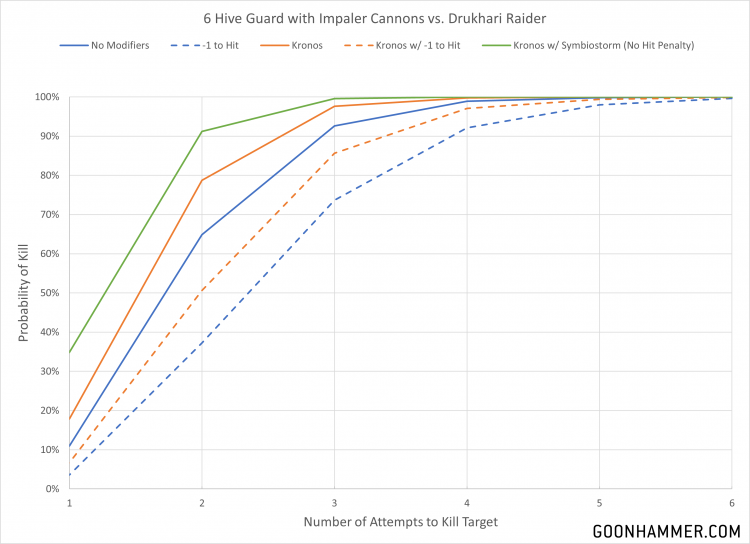 The most suggestion option for Necrons was the Lokhust Heavy Destroyer, a floating monstrosity which can either fire a single S10, AP-4, D3D3 shot or 3D3 S7, AP-1 D1 shots. Thanks to their Hardwired for Destruction ability they always re-roll hit rolls of 1, and if Extermination Protocols is used for 2CP they can re-roll wound rolls. Alternatively if a Lokhust Lord is nearby then wound rolls of 1 can be re-rolled thanks to the United in Destruction (Aura) ability. A unit of 3 is 210 points. As you can see from the chart below the numbers favor the gauss destructors, with Extermination Protocols providing a helpful boost given the low number of shots. Around 3-4 attempts are required to get a 95% success rate. 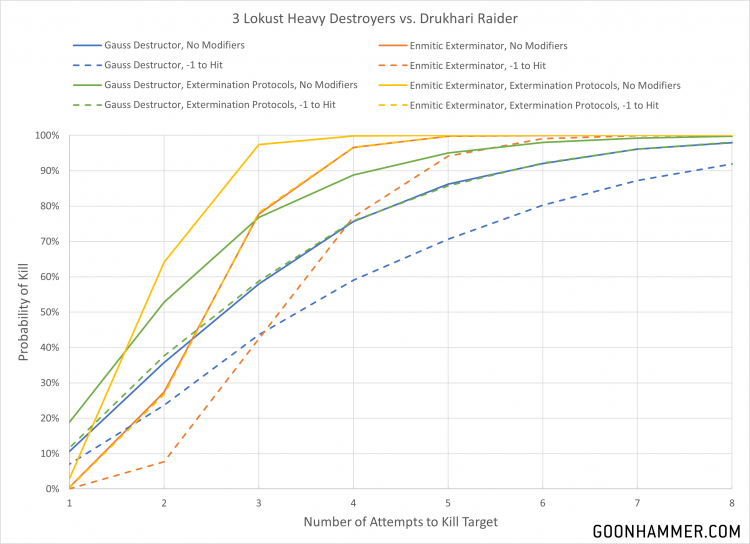 Fast, lethal, and able to unleash a massive amount of damage, Harlequin Skyweavers are absolutely brutal when attacking VEHICLES with haywire cannons. Each model gets D6 S4, AP-1, D1 shots which hit on a 3+ and will wound VEHICLES on a 4+ and are guaranteed to cause a mortal wound (or D3 mortal wounds on a wound roll of 6+). This bypasses the invuln save of the Raider and makes them incredibly nasty at 300 points for six. Those points will give you a massive ability to deal damage, with the Skyweavers killing the Raider in one turn 45% of the time even with a -1 Hit roll penalty. 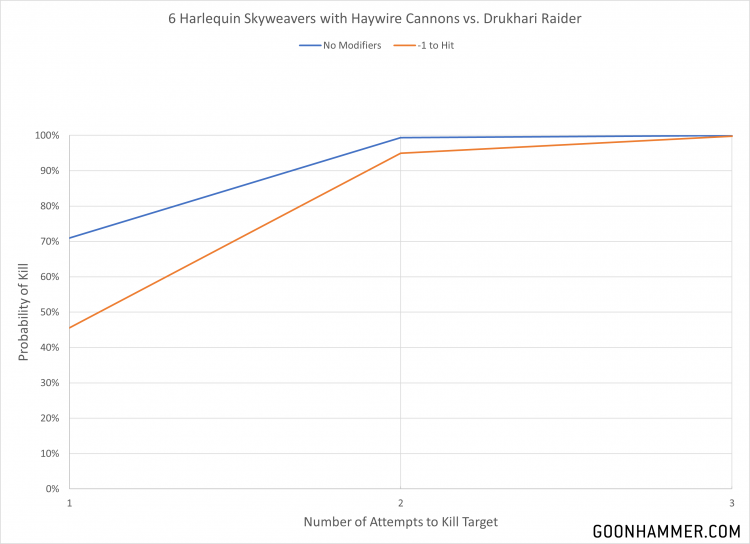 Last year the Greater Good provided a lot of options for T’au forces, and one of the most significant changes was the large number of options provided to the XV8 Crisis Battlesuits. Although the baseline BS of 4+ isn’t great, Stratagems like Veteran Cadre for 1/2CP can improve that to 3+ and Coordinated Engagement can provide the equivalent of 5 markerlight strikes on the target. For this analysis we’ll look at a unit of XV8 Battlesuits with overcharged cyclic ion blasters, which have the perfect balance of strength, AP, damage, and number of shots. They’re not cheap at 79 points per model before other wargear is added like a Velocity Tracker to add +1 to hit when targeting a fly unit. For this analysis we’ll look at a range of hit rolls; 2+ to 5+, and assume that the target is re-rolling 1s to hit. We see below that even three battlesuits have a VERY good chance of taking out the target, thanks to the combination of re-rolls, high strength, and high damage. 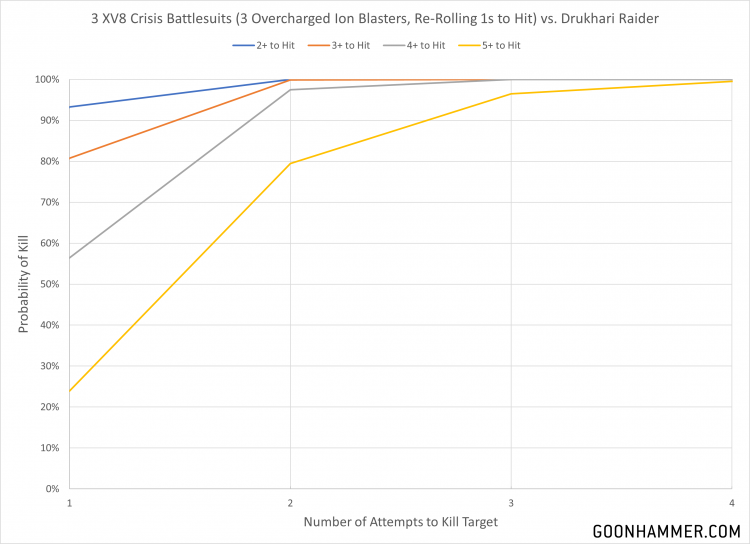 This is the xenos section after all, so it makes sense to take a look at what another Raider can do. 85 points will get a single S8, AP-4, D3+3 shot with a dark lance while 90 will get 3 S5, AP-3 D2 shots with a disintegrator. Both will likely be at BS 3+. As expected the results aren’t great. The dark lance is a lot better at that job given enough attacks, but the job of a Raider is to be a transport and not a gunship. 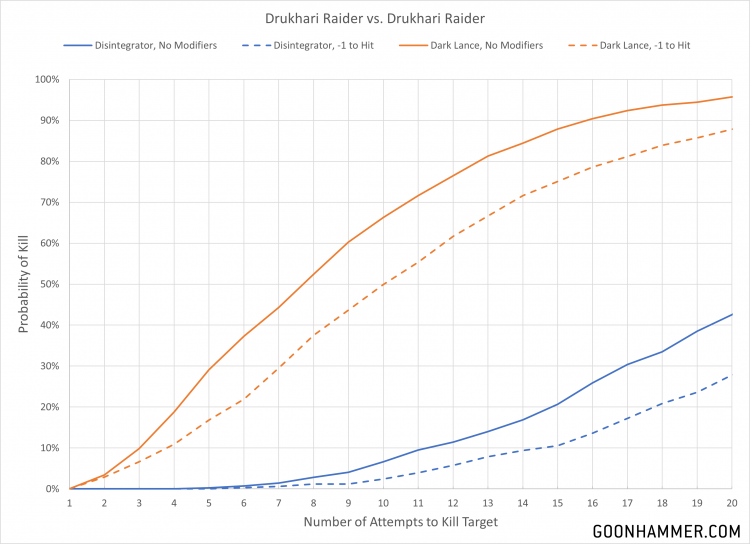 The xenos factions have a lot of options available to them, but no matter what option you consider the amount of points required to reliably kill a Raider before it can do its job of disgorging whatever it was transporting is high. Next up will be the options available to the denizens of Chaos, so If you have any suggestions on what I should look at please submit them here. That link also works for any ideas you might want me to take a look at in a future article. As always, thanks for reading! If you have any feedback, feel free to drop a note in the comments below or email us at contact@goonhammer.com.