This week’s Hammer of Math dives into Age of Sigmar’s Broken Realms: Kragnos to take a look at Lord Kroak’s unique ability to withstand damage, the amazing lethal output of Kragnos, and the sniper prowess of Doralia ven Denst.

With the release of Broken Realms: Kragnos Games Workshop continues to do two things: Tempt me with gorgeous models and bring about some very cool and innovative rules which are fun to look at. Two perfect examples of this can be found in Lord Kroak and Kragnos, the End of Empires. In addition to being an immensely powerful wizard, Lord Kroak has an amazing ability called Dead for Innumerable Ages. At the end of each phase, you roll 3D6 and add the number of wounds and mortal wounds that have been allocated to the model. If the total of that roll is greater than or equal to 20, then Kroak is dead. Otherwise all of the wounds are healed. Should Kroak take 18 or more wounds he is immediately slain and removed. The chart below graphs the probabilities relative to the amount of damage inflicted. There’s a few interesting things about the results. First, even though the designer notes explicitly call out 18 wounds as the target number; the fact that the target number is 20 or more means that 17 wounds also has a 100% chance of killing him. Second, the balance point for Lord Kroak is actually only 9 wounds, meaning at that point he dies 50% of the time. That doesn’t seem like a very large number for a model which costs 430 points, so smart players will still want to make sure Kroak is properly screened. 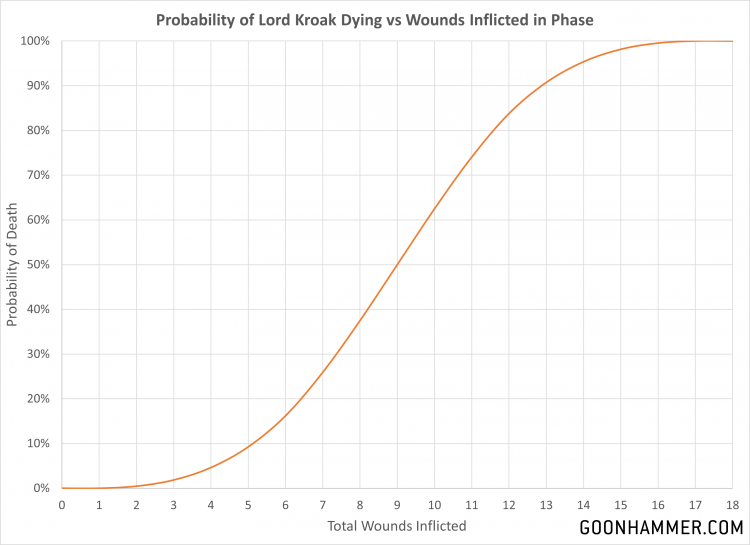 Rob: How does this compare to Kroak’s prior incarnation? In his old Warscroll, Kroak had 7 wounds and the ability to ignore wounds on a 4+, which effectively gave him 14 wounds on average. As a result, taking him down in a single phase was certainly much more difficult for the prior Warscroll incarnation, but those wounds would accumulate over time, making it possible to take him down with wounds inflicted over multiple phases or turns. While he can now go down to a god roll and 3 wounds, more often than not you’re going to need to drop 10+ wounds in a single phase if you want good odds of bringing him down.

I’ll admit, I don’t know very much about the lore of Age of Sigmar. Fortunately Games Workshop does a pretty good job of conveying the intent of these models. Kroak looks like a scary frog wizard mummy, and Kragnos looks like an absolutely terrifying embodiment of unbridled slaughter. Kragnos’s warscroll is available on Games Workshop, and it turns out that he pretty much is exactly as advertised. As befitting a unit blessed with the title The End of Empires, Kragnos is equipped with the ability to unleash wanton destruction in multiple phases. In the charge phase he has the Rampaging Destruction ability, which has two options after Kragnos has finished a charge move:

The resulting probability curve is very odd, with several flat regions and drops thanks to the uneven distribution of values that are produced when two numbers are multiplied. Note that the probability of getting a 7 on 2d6 is around 17%, so you could consider this ability to be the equivalent of requiring a 2+ on a D6. But even taking that into account, the sheer amount of damage that Kragnos can produce on the charge is immense. Taking in to account Kroak’s variable ability to withstand damage, Kragnos has a 46% chance of killing him on the charge. 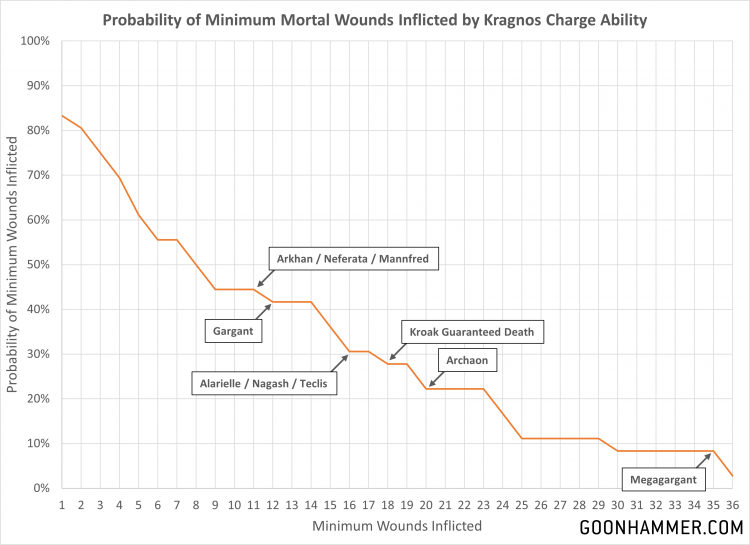 Of course Kragnos doesn’t just kill things on the charge. He’s also equipped with a variety of unpleasant melee weapons which can inflict an immense amount of damage. His largest and most unpleasant is The Dread Mace, which gets 6 attacks on a 2+/3+ profile with a -3 modifier on saves and a Damage characteristic of 4. If the charge doesn’t kill you, the giant spiked mace wielded by the building size monstrosity probably will. 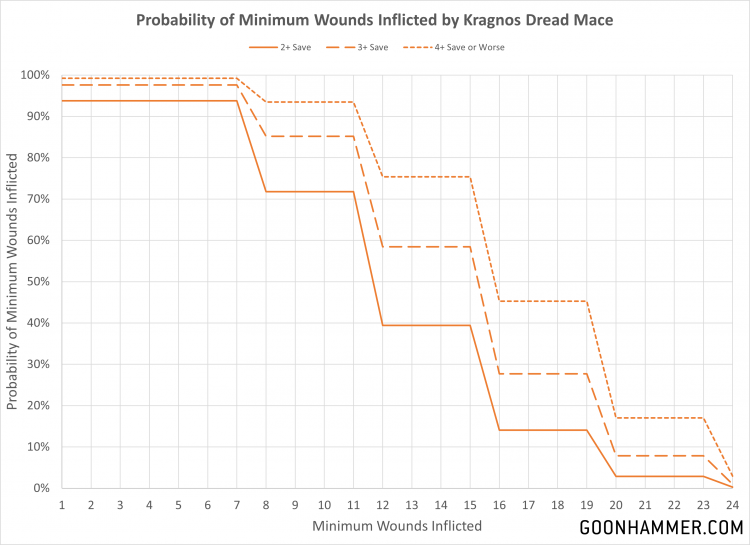 Taking a look on the other end of the power scale is Doralia ven Denst, who happens to wield a crossbow almost as large as she is. When standing still she can fire the crossbow twice at a baseline of 2+ to hit, and given the prevalence of other hit bonuses available to Cities of Sigmar she’s likely to be hitting anything she targets 83% of the time. When attacking WIZARD or DAEMON models her damage doubles, giving her the potential to deal as much as 8 points of damage. Against Kroak and his 4+ save that translates to a 10% chance that Doralia can snipe him. That’s one hell of a crossbow.

Age of Sigmar players should be rightfully excited for all of the really cool and innovative content coming out of Games Workshop. These rules are interesting and novel, and it was a lot of fun to take a deep dive into the effects. I’d like to take a moment to thank Magos Sockbert for his help with figuring out the details and providing me with some invaluable guidance. Thanks for reading! If you have any feedback, feel free to drop a note in the comments below or email us at contact@goonhammer.com. If you have any questions that you would like answered in a future article like this one, please submit them here.