This week’s Hammer of Math dives into the realm of really big guns and the tanks that drive them, focusing on the main weapon options of the Astra Militarum Leman Russ Tank.

The Astra Militarum are defined by two key elements; hordes of unfortunate humans getting slaughtered and giant metal boxes with turrets on top making everyone around them prematurely deaf through superior firepower. The iconic metal box in this case being the Leman Russ Battle Tank, a well armed and armored treaded vehicle that every Regiment loves and more than a few practically consider Troops. As befitting a key vehicle with years of lore and rules development, the Leman Russ has a considerable number of variants and options. If the traditional battle cannon doesn’t suit a player, they can consider a massive plasma gun or even a tank-scale sniper rifle. As one might expect the viability of these weapons changes considerably from codex to codex, and the latest release of Codex: Astra Militarum is no different.

While the BS of a Leman Russ still hasn’t changed (4+ for everyone), Leman Russes lost Grinding Advance (shoot twice when moving under half) in exchange for Turret Weapon. Turret weapon provides two benefits. First, the tank adds 1 to hit rolls. Second, the tank can no longer be shut down by being mobbed by a bunch of throwaway infantry. Now the tank can still fire at units that are outside of its Engagement Range while in combat, but at a -1 penalty. Going from a 4+ to a 3+ on regular shoting immediately improves the tank’s offensive output by 33%. Many of the weapons have also received a significant improvement in the number of attacks, going away from the standard D6 shots that most weapons had from before.

Here are the various options available to a Leman Russ. When compared to previous versions I do my best to make the comparison as general as possible, but if a particular stat is required (such as a save due to an AP change) I will specify it in the description. The comparison being made is expected wounds; the amount of damage expected to be delivered to a target on average. The general comparison will be between a tank from the previous codex firing via Grinding Advance versus firing once with the benefits of Turret Weapon.

Probably the best way to see how the various weapons work is to put them against different targets. For this analysis we’ll assume no regimental doctrine or orders, although the default of Born Soldiers will increase the output (particularly for lower strength weapons). We’ll start with a T8/3+/5++ profile which can represent a wide variety of targets, which is shown in the chart below. Note how the median value for the vanquisher battle cannon was actually 0; while the vanquisher has a very high floor when it hits the combination of having to hit and wound on 3+ means that the net probability of hitting and wounding is only 44%. This is definitely an example of where Gunners, Kill on Sight! or the Veteran Commandeer (yes, that’s how it’s spelled) Tank Ace option with Elite Sharpshooters would be useful. The demolisher is also particularly interesting thanks to the combination of large number of shots, high strength, and high damage potential. 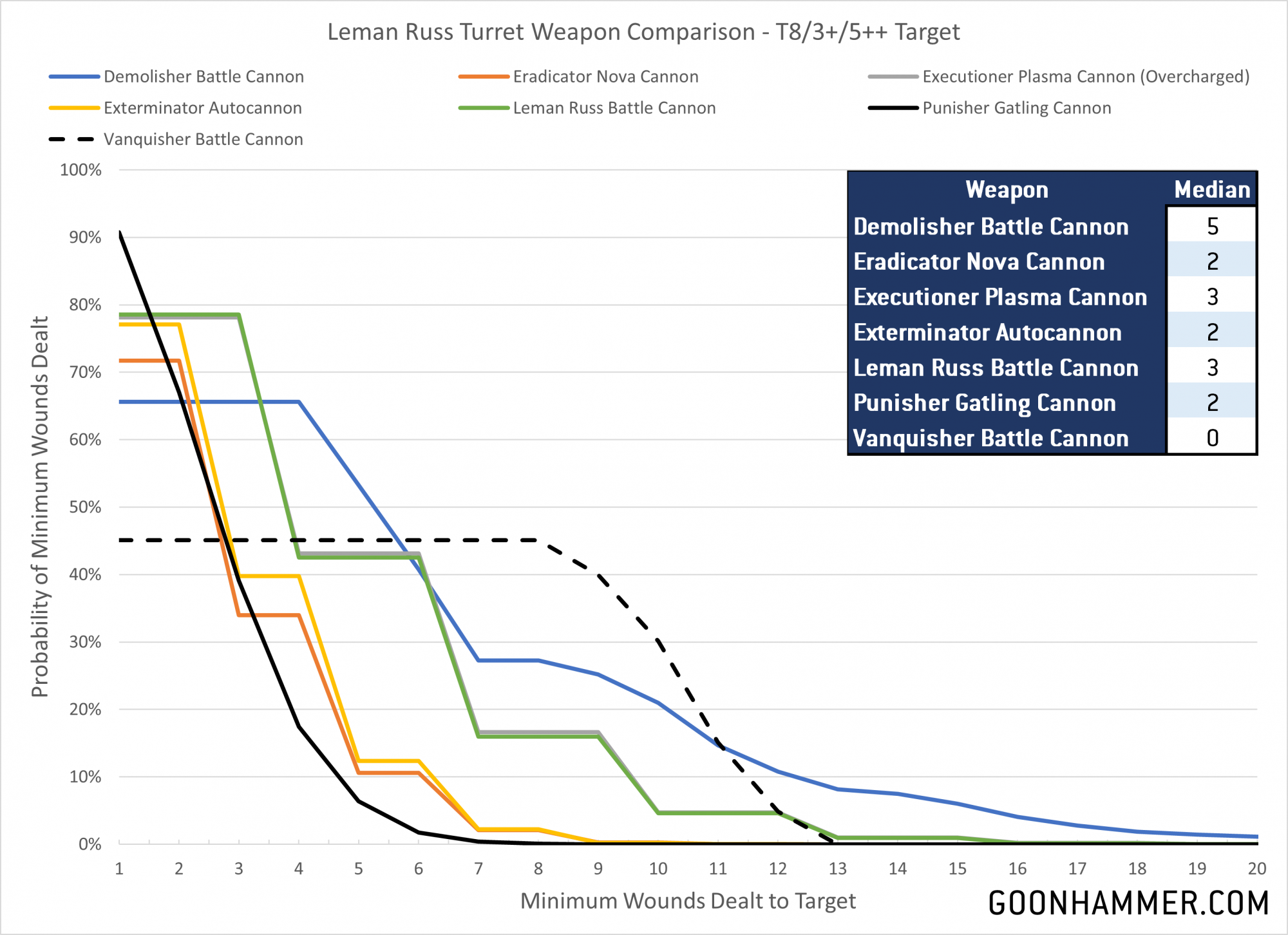 Next up we’ll look at something a little more vulnerable; a T5 target with a 4+ and 3 wounds like a Tyranid Warrior. I assumed that a unit of 6 was the target to examine the impact of the first level of Blast. Unsurprisingly the Executioner is extremely useful here, with a damage characteristic of 3 allowing it to melt a Tyranid Warrior with every shot. Notably the demolisher and Leman Russ battle cannons also perform pretty well, which is interesting given the high median damage that the demolisher inflicted on the Knight target above. 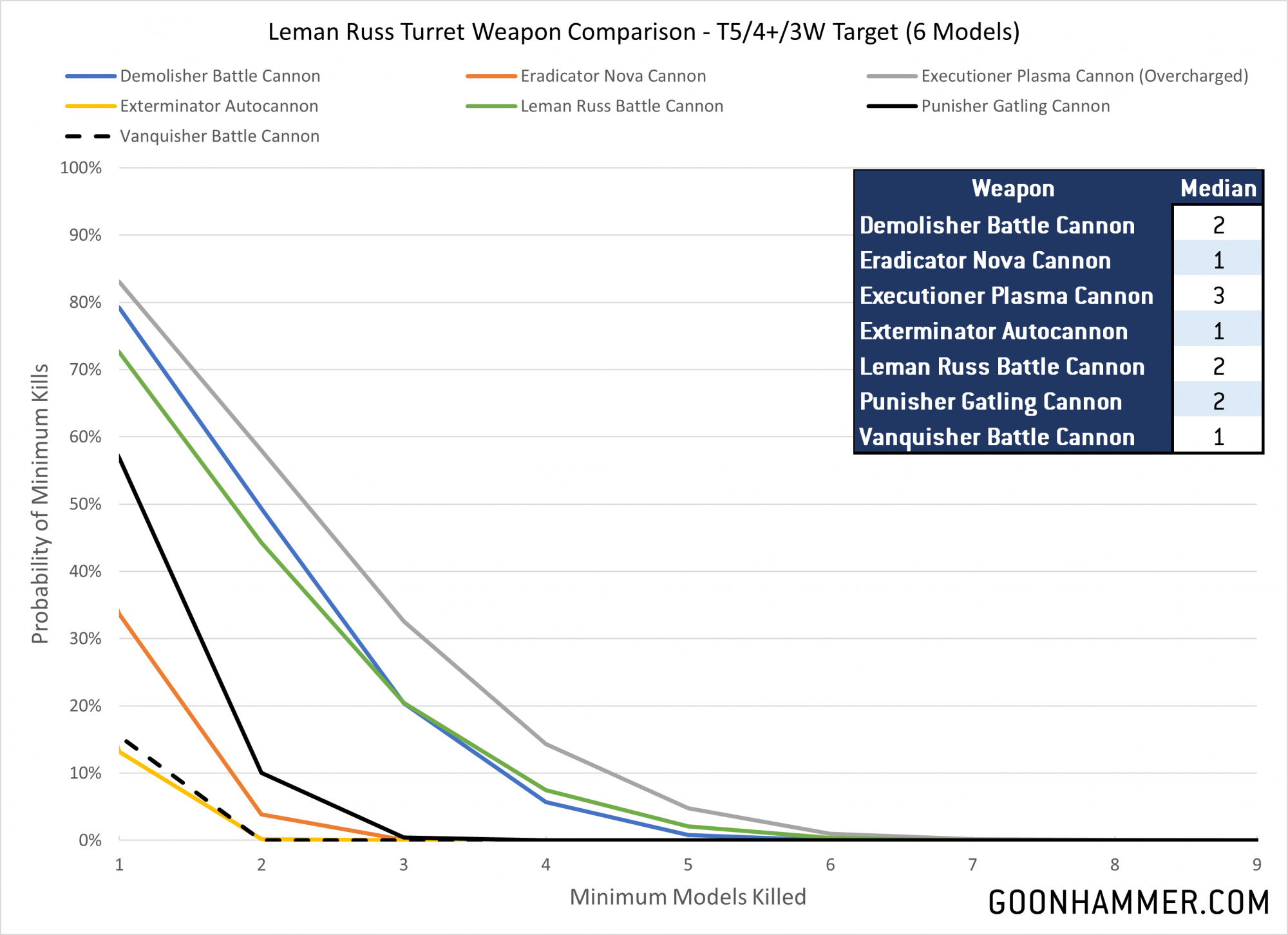 Finally we can take a look at what it would take to clear out a horde threat like a T3/5+ gaunt. For this we’ll assume that the target is large enough to guarantee the maximum number of attacks for Blast weapons. Here we finally see the punisher in its element, mowing down a median of 9 models and easily outscoring anything else. Second are the three weapons with 9 shots; the eradicator, executioner, and Leman Russ cannons. Behind that is the sadly underperforming exterminator overlapped with the demolisher, and finally the vanquisher brings up the back with a median of 2 dead gaunts courtesy of the mortal wounds. 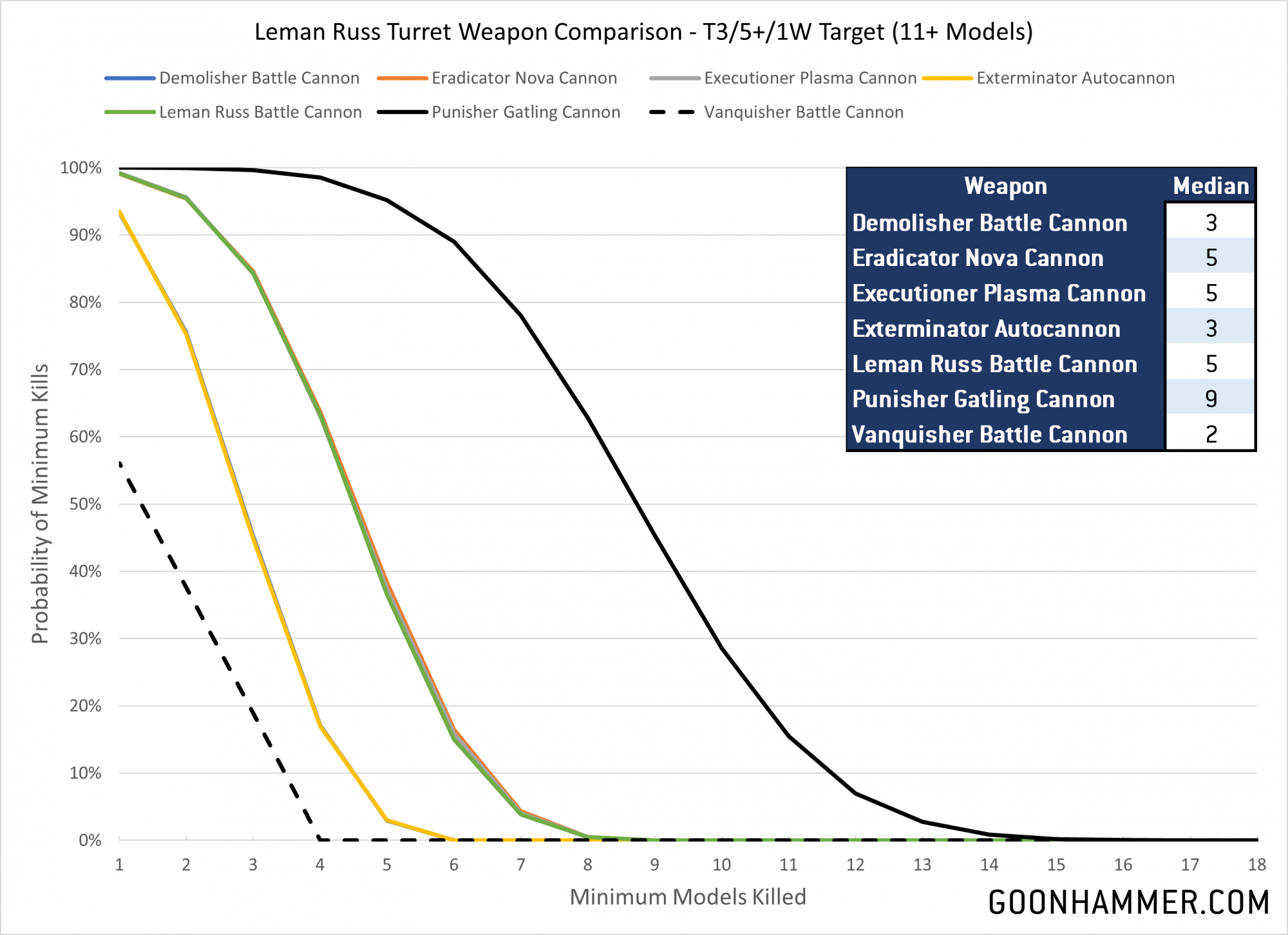 While there are plenty of options available for Leman Russ Tanks there are some clear winners and losers. On the bottom of the pile is the exterminator autocannon, which simply doesn’t have the damage output or number of shots to compete with other options. At the top are the demolisher battle cannon, the Leman Russ battle cannon, and the plasma exterminator. It’s reassuring that the go-to weapon for the Astra Militarum remains a viable option against nearly any threat. For this interested in hitting the big targets, the vanquisher battle cannon has a high floor so long as you take steps to ensure it hits.