Saga of the Beast has provided some exciting content for both Orks and Space Wolves, and we would be remiss if we didn’t take the opportunity to look at how the numbers check out. There’s a lot in this book, so this week we’ll cover Ghaz and Ragnar along with the possibilities offered by the most absurd combinations available in Smash Captains.

Ghaz has certainly been eating his Sgueaties (like Wheaties, but mobile, full of teeth, and capable of murdering you for breakfast… so nothing at all like Wheaties really). As a 12W unit with the MONSTER keyword he’s transformed from a big hulking Ork to something closer to a greenskinned dreadnought.  As a Goff he gets an extra attack (not a hit) with every hit roll of a 6, and hit rolls of 1 are re-rolled thanks to Goff is da Best. Note however that because he is a MONSTER and not INFANTRY he doesn’t benefit from his own Great WAAAGH! (seriously GW that should always be capitalized) which means he only gets 5 attacks on the charge and can’t Advance and charge. On the other hand he gets nastier as he gets angry. A lot nastier, with two more attacks at the expense of losing two points of Strength on his bottom bracket. If you’ve read this column long enough you know that attacks and damage are significantly more impactful than the other characteristics. Of course this is just the baseline; what options are available to make him REALLY mean? Well… there’s not much. The only option is Orks Is Never Beaten! (2 CP) which will allow him to fight twice after he dies. 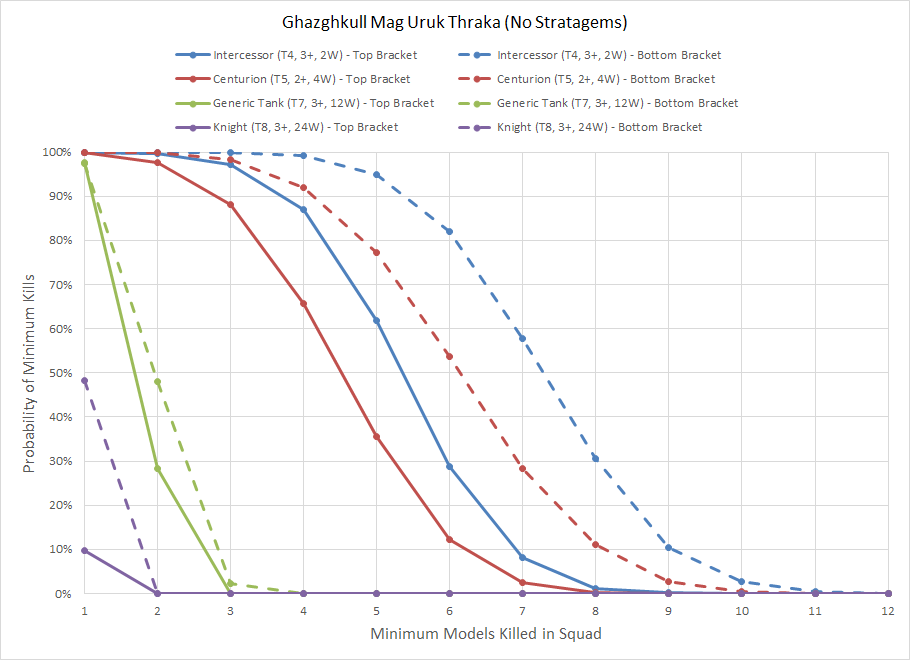 Turns out he doesn’t need anything extra, as Ghaz is VERY good at killing things, especially when you get him angry. Those extra two attacks are the difference between a 10% chance of killing a Knight in one turn and a 48% chance, and he can reliably slaughter an entire squad of Primaris or Centurions by himself.

John Wick in Power Armor and a Top Knot

On the opposite side of the book we have Ragnar Blackmane, who had one of the oldest models in the GW line (I’ve been playing since 2nd edition and the same model has been with him all this time) and is a personal favorite of mine. Between the iconic topknot, double wolf champion belt, double-sided chainsword, and general badassery this guy is pure 40K. And his stats have been SIGNIFICANTLY enhanced after being dragged across the Rubicon Primaris. In assault his baseline SEVEN attacks are further enhanced by Berserker Rage giving an extra three when he charges, he re-rolls hit rolls of 1 thanks to Jarl of Fenris, and thanks to Savage Fury when he attacks in the Assault Doctrine he gets an extra attack on an unmodified hit roll of 6. But wait, there’s more. Against something with a Power Level greater than 6 he can use Seeking a Saga (1 CP) to re-roll wounds. The new book also gives him Touch of the Wild (1 CP) which provides an extra hit on a 4+ and Gene-Wrought Might (1 CP) which allows a hit result of a 6 (including the second hit from Savage Fury) to automatically wound.  Use both Stratagems and on average Ragnar is getting 16 hits, of which 3 automatically wound. And of course Honour the Chapter (3 CP) and Only in Death Does Duty End (2 CP) are available to fight twice should you need it. 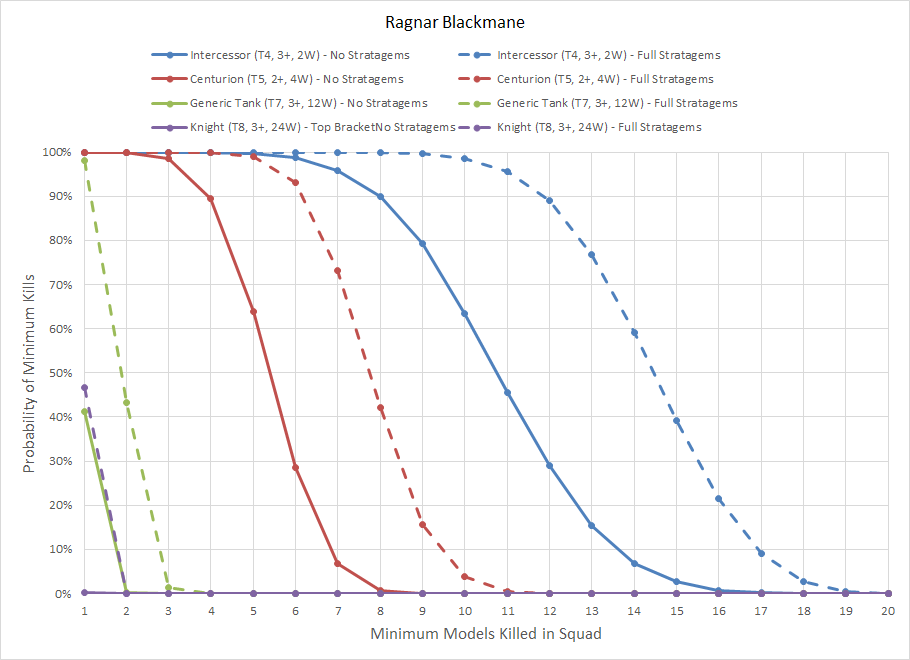 For the analysis above I assumed the Assault Doctrine and applied Seeking a Saga to every target, but as usual I did not use a fight twice Stratagem. Using Ragnar Blackmane against a squad of 5 Intercessors is one of the most egregious displays of overkill imaginable, so kudos to you for doing it. Fully charged Ragnar is an absolute monster, with a high probability of wiping out nearly anything he comes in contact with. Against a fully boosted Ragnar full squads of Intercessors, Centurions, and Tanks are nearly guaranteed to disappear. Even a Knight is vulnerable, thanks to the combination of a massive number of attacks, re-rolling wounds, -4 AP, and the guarantee of two points of damage every time a six is roll to hit. Things get even more terrifying if you bring along a Wolf Priest who can perform Tale of the Wolf King and the Lord of the Deeps to add +1 damage, but that requires Ragnar to be on the board and therefore unable to deep strike.

Obviously we can’t leave without also taking a look at the brutality of a Warboss, especially now that Da Biggest Boss (1 CP) is available to make your warboss even nastier with an extra attack, wound, and a 4+ invulnerable save. We’ll use a Goff Warboss for No Muckin’ About (extra attack on an unmodified hit roll of 6), the Brutal But Kunnin’ trait for the hit re-roll and extra damage, and utilize Da Killa Klaw Relic which has fixed damage, re-roll wounds, and no hit penalty. If you use the Warboss on Warbike you can also apply Full Speed Ladz! (1 CP) to get a +1S bonus. Although we don’t use it in the analysis Orks have access to the Get Stuck In, Ladz! (3 CP) and Orks Is Never Beaten (2 CP) Stratagems to fight a second time. A nearby Weirdboy can also make the boss even nastier, with Fists of Gork adding 2 to his Strength and Attacks characteristics.

This results in 6 melee attacks hitting on 2+ (re-roll misses, extra attack on unmodified 6) at strength 14 (re-roll failures), an AP of -3, and a Damage characteristic of 4. 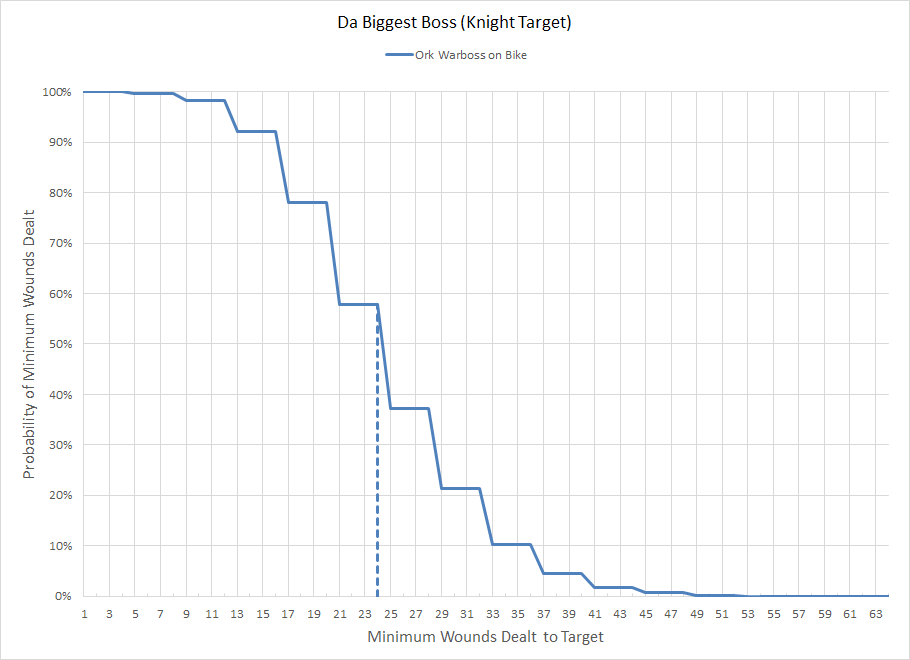 Pretty good. A 58% chance to kill a Knight in one turn is a pretty serious threat, and the Ork does it with a reliable source of fixed damage that helps significantly with reducing variability. Historically Orks have been the victim of high variability, with random attacks and damage rolls causing wild and unreliable swings in their output. It’s one of the reasons that Deathskulls are so popular. In this case we see a large number of attacks merged with re-rolls to hit and would that nullify most of the gatekeeping rolls, resulting in a pretty nasty combination. It’s also why Ghaz isn’t as lethal as he could be; without the re-rolls to wounds and one less attack he just doesn’t have the offensive firepower that other options have.

Both the Orks and the Space Wolves received a significant boost in the Smash Captain/Warboss department. When we first explored this series Wolf Lord Wolfsmash Smashwolf was in an unimpressive position when compared to the significant benefits offered by the Space Marine codex. We saw a boost to the Blood Angels when Blood of Baal came out, so let’s see what happens to the Sons of Russ?

As before we’re assuming the target is a Knight so the Seeking a Saga Stratagem will be applied. Previously we found that Saga of the Wolfkin (+1 attack) was the superior trait compared to Saga of the Beastslayer (+1 to wound). Hunters Unleashed still gives him a +1 to hit on the charge which will offset the penalty of the thunder hammer, but instead of the Wulfen Stone for +1 attack we’ll use the Master-Crafted option on the thunder hammer to make it deal 4 damage per hit. As with Ragnar we’ll use Touch of the Wild to add an extra hit on a hit roll of 4+, and we’ll assume we’re in the Assault Doctrine for an extra -1AP. Now here’s the question; are you better off going pure Space Wolves so you can keep the bonus of Savage Fury, or should you bring in a Dark Angel so you can apply The Lion and the Wolf (1 CP) for an extra strength, attack, and WS? 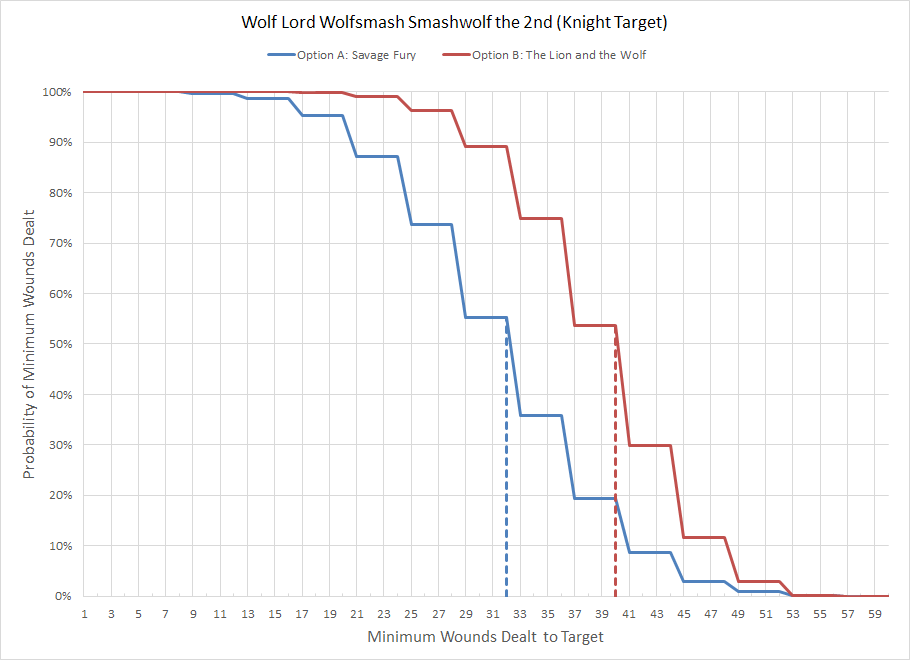 Congratulations; you’ve just found the most devastating Smash Captain in the game. The reason here is simple; Touch of the Wild gives an INCREDIBLE boost and effectively increases the number of attacks by 50%. On Ragnar it’s scary; on a Smash Captain with a thunder hammer that deals 4 damage with every strike it’s terrifying. It has a 99% CHANCE OF KILLING A KNIGHT IN ONE TURN, making it more lethal than even a Bloodthirster of Insensate Rage. Even without The Lion and the Wolf the Wolf Lord is brutal, with an 87% chance of one-shotting a Knight. And neither one of these choices includes the application of a Stratagem to make them fight twice.

So just how silly is this? Well historically we’ve used our good friend the Warlord Titan to examine the upper limits of how tough something is. Folks may recall the absurdity of a Warlord Titan not being guaranteed to kill a fully protected Leviathan Dreadnought before GW rightly FAQ’d things into the ground. So that made me wonder about taking things in the opposite direction; if you boosted Wolfsmash Smashwolf the 2nd as far as you could go how bad would things get? To figure that, first take the Lion and the Wolf version and add two Litanies: the “Wolf King Litany” (I agree with Rob on the nickname) to make the thunder hammer have a Damage characteristic of 5 and Exhortation of Rage to give every hit roll of 6 an extra attack. Next, fight twice using Honour the Chapter or Only In Death Does Duty End when the Titan inevitably converts our hero into a smear of blue flecked genetically engineered meat paste. 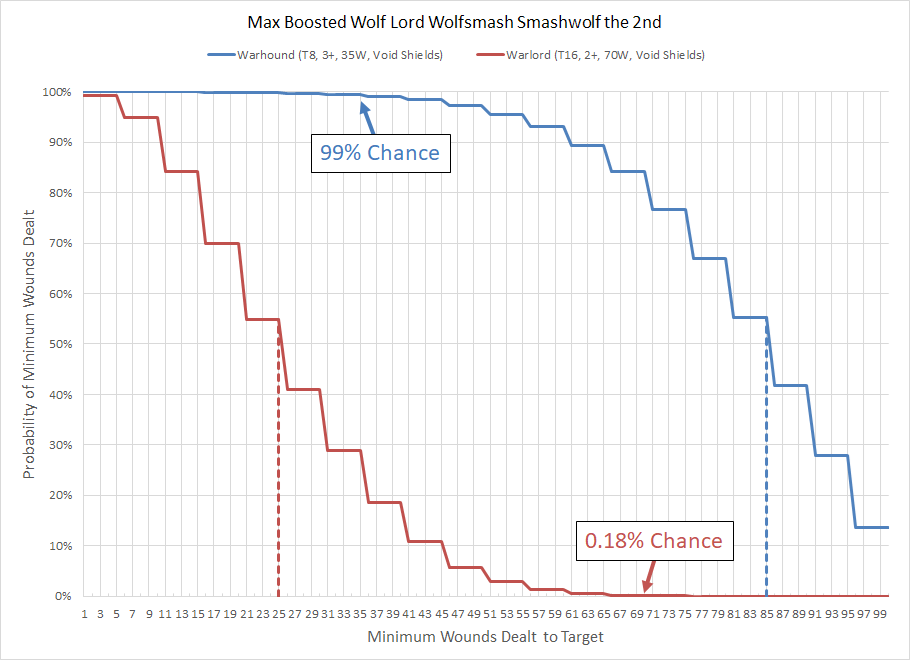 So the poor Warhound dies 99% of the time. Maybe next time play Apocalypse? It’s a lot of fun and Titans are suitably terrifying. The good news is that the Warlord Titan is likely to survive; there’s only a 0.18% chance that a properly inspired solitary model can kill a 6000 point walking cathedral armed with archaic city-destroying weaponry in a single turn of combat.

In order to make The Lion and the Wolf work, you also need to bring along at least a Dark Angel Patrol so that you can use their Stratagems. If you’re curious the best combination for a Dark Angel Smash Captain is a Master with a thunder hammer, storm shield, Master-Crafted Relic, with the Lay Low the Mighty trait and the Lion and the Wolf Stratagem applied. It will one-shot a Knight 42% of the time.

This is a fun one. Both Ork and Space Wolf players got some good things, and we didn’t even explore the options associated with kustom jobs or the new powers. For me the real standout is the extreme impact that Touch of the Wild will have. A 4+ to get extra hits is incredibly powerful, increasing the number of attacks a model gets by over 50% since the hit roll doesn’t apply to the extra hits. Combine that with the proven combination of stacking damage and attack bonuses and you get a serious threat that I don’t think GW really expected folks to have. Don’t be surprised to see a lot of Space Wolves inserted to a lot of lists. Personally I’d love to see what a combination Space Wolf, Dark Angel, and Salamander list with Grav Cannon Devastators could do.

Thanks for reading! If you have any feedback, feel free to drop a note in the comments below or email us at contact@goonhammer.com. If you have any questions that you would like answered, please submit them here.