Hello, Dear Reader. Kevin’s off this week tending to other, non-math related things so this week you get me talking statistics. And while I generally do enjoy probability theory, I’ve also got a bunch of D A T A to talk about as it relates to objective scoring in Nachmund, so you get that instead.

We’ve talked about Nachmund objective scoring in Hammer of Math already, but now that we’ve got more than a month of data behind us, we can talk about what the data actually looks like for Nachmund mission scoring.

Before we start, note that I will be using the term “significant” to denote where a difference between two results is statistically significant at a 95% confidence level.

Finally, we’d like to note that the secondary data here comes from the wonderful ITC Battles App, the premier app for tracking games of 40k. As much as we like the printable reporting sheets we’ve done, the ITC Battles App is just the best way to track games of 40k out there.

The biggest change from 2021 to Nachmund was the change to primary scoring – primary objectives now score 4, 8, or 12 points for holding objectives each turn after the first, with additional primary “bonus points” available for scoring either on a progressive or endgame basis.

Let’s start with overall scoring, where we can see that the change in scoring over the last three GT packets has been negligible, though there appears to be a small (but not statistically significant) downward trend in scoring from GT21 to Nachmund.

There might be a larger trend here, as primary scoring is now dependent on not just holding objectives but completing additional mission parameters. Though we don’t (yet) have the data on the new primary mission scoring with hold points broken out separately. We can, however, get an idea of how some of this looks by looking at scoring by mission.

Despite the change in missions, the scoring differential between players in missions hasn’t changed much; we tracked the average differential at around 15 points in GT 2021 missions, and we’re about the same here at 15.1. As with GT21, the two “Hold 2/3/more” missions have high average point differentials, as winning typically requires a more dominant performance than on hold 1/2/more missions. What’s noteworthy here is that there’s no longer a mission with a sub-30 winner average score – the new Scouring is a massive step up.

You Have to Win on Primary

Something else I started thinking about while writing this was how likely it is to win games where you are outscored in the primary or secondary objectives. With both being worth up to 45 points, you might expect these probabilities to be the same. But primary scoring, is mostly-but-not-quite zero sum, meaning that often only one player will score hold three or hold more per round. As a result, only 8% of wins occurred when the winning player scored fewer primary points, while 11.3% had the winning player score fewer points on Secondary Objectives. Put more simply: You have to win on primary to win the game. There are a lot more lists that can max out around 42 points on secondary objectives but give up 45 and still win.

There were a number of secondary objective changes in Nachmund, with key tweaks to a number of key secondaries, but no outright removals or additions (though some names did change). 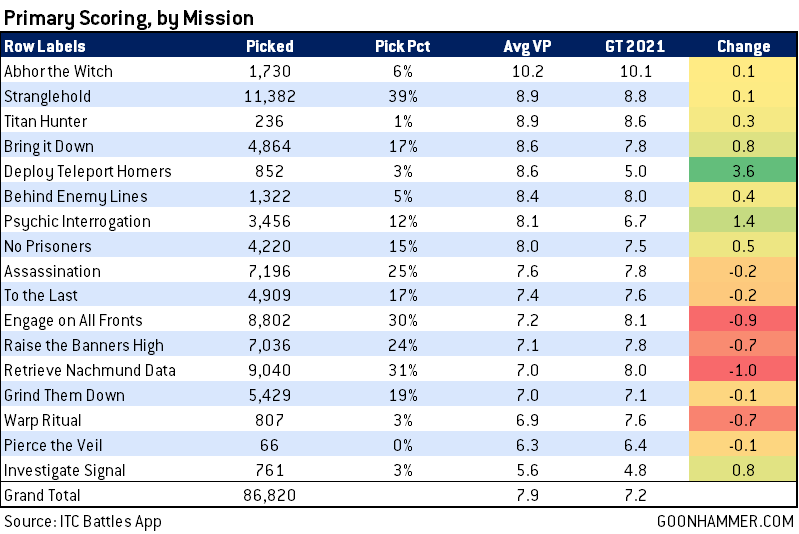 Looking at scoring over the first month of Nachmund shows us some interesting developments relating to key secondaries, some of which we predicted in December and others which we didn’t expect – but that we believe can be explained.

Finally we should talk about Faction Secondary objectives. These tend to fall into four categories:

Of course, having options is much better than not having options, even if those options are largely not great (see Codex: Orks). Nachmund introduced us to five new faction secondary objectives to help along those poor factions without any bespoke secondaries to choose from. How do those stack up?

The good news is that Imperial Knights got a stellar addition in Yield No Ground, which sits in a category that was very difficult for the faction (Battlefield Supremacy) and rewards the army for doing things it already mostly wanted to do. Averaging 10.3 VP places it among the better faction secondaries, and at a 72% pick rate it likely transforms how the army plays.

The bad news is… well, all the other secondary objectives. There’s not a single one among the rest that’s worth more than 7 VP on average, and you can tell how dire circumstances are that this hasn’t stopped For the Emperor! or The Long War being picked in half of the games of their factions. 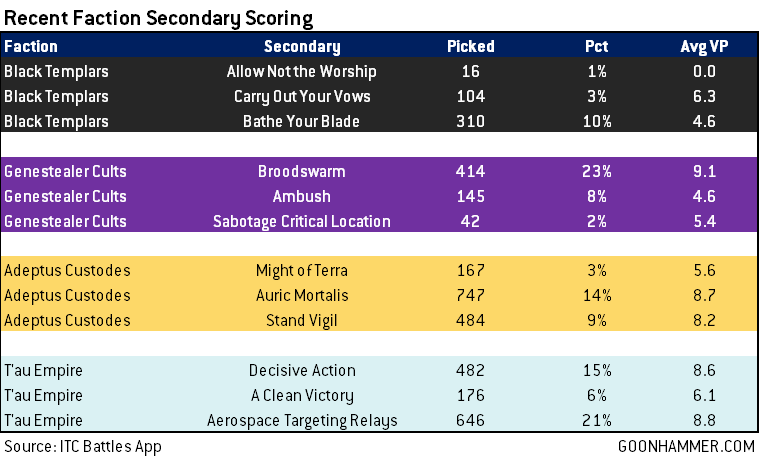 If we look at the most recent factions to receive new books, we can get an idea of how those secondaries are shaping up and which categories they belong to. Of the recent batch, only the Genestealer Cults’ Broodswarm seems like a potential Tier 1 secondary objective, though it’s more likely to be a situational all-star, as borne out by its 23% pick rate. Likewise for the T’au Aerospace Targeting Relays secondary objective, though it and Decisive Action may also just be tier 3 secondaries.

The Black Templars’ Allow not the Worship of Unclean Idols makes an odd appearance here, with only 16 picks and 0 VP scored; while it may have had more value prior to Nachmund requiring a player choose between it and Oaths of Moment almost certainly dooms it to irrelevance. 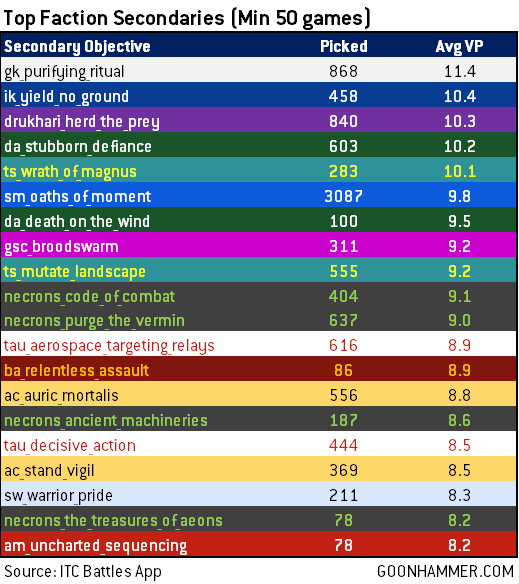 Looking at the top faction secondaries in the game we can see that Purifying Ritual is still tops by a wide margin (and we’ve previously discussed how this has a warping effect by pushing GK ahead of opponents who cannot take Abhor but otherwise helps them keep up with opponents who can), but it’s followed fairly closely by Yield No Ground, Herd the Prey, and Stubborn Defiance. Herd remains one of the game’s dominant secondary objectives, taken in 60% of Drukhari games since the start of the Nachmund season, despite dropping by nearly a full point in effectiveness. This is partly because Drukhari are just worse at pulling it off after another round of nerfs (while Necrons have gotten better at it), and partly because it’s a lot worse against the likes of Crusher Stampede, T’au, and Custodes.

For Thousand Sons, Wrath of Magnus is also a powerful option, and one that’s seeing more more play as Psykers show up in more lists – its’ currently a pick in 24% of Thousand Sons games, compared to 52% for Mutate Landscape. It’s also clear from looking at this that there’s only one option better than Oaths for Space Marines and that’s the Dark Angels’ Stubborn Defiance.

Early results suggest that Oaths is worse in Nachmund; this may be because of the larger number of middle-of-the-table objectives, which make it harder to hold the middle as pressures push enemy armies to the middle. Herd has gotten a little worse as meta armies have become more maneuverable, and Necrons just appear to have four decent-to-great secondary picks to choose from, with Code of Combat and Purge the Vermin being the clear stand-outs.

Next Time: Back to Our Regular Schedule

That does it for our look at objectives this week. Stop in next week when Primaris Kevin will be back to talk about other stuff. Probably more Elf bullshit.