This week’s Hammer of Math looks at some of Ork rules in the new Warzone Octarius supplement.

Orks is best. This is indisputable. Some may attempt to argue otherwise, using such paltry tactics as “logic” or “reminders that this is fiction” but in the end… Orks is best. Games Workshop has chosen to remind us of this fact with the release of Warzone Octarius: It’s About Time The War About Orks Included Orks. Fortunately the rules are worth the wait, featuring both a new Specialist Detachment Army of Renown with the Speed Freaks Speed Mob as well as an enhanced supplement for the Blood Axes.

First up we have what can only be described as the pinnacle of sniping technology; a Dakka 14/10 kustom shoota which can inflict mortal wounds and ignores the Look Out, Sir rule. The S5, AP -1, D1 profile that inflicts mortal wounds on an unmodified wound roll of 6 certainly sounds fun, but how effective is it? We’ll assume that the firer is a Mek for a 4+ BS and look at various combinations of wound and save in the chart below. The combination of mortal wounds and sheer volume actually make for a pretty viable sniper rifle, even having a chance to kill a Primaris Captain 5% of the time. I imagine it would make for an even better gimmick in Crusade. 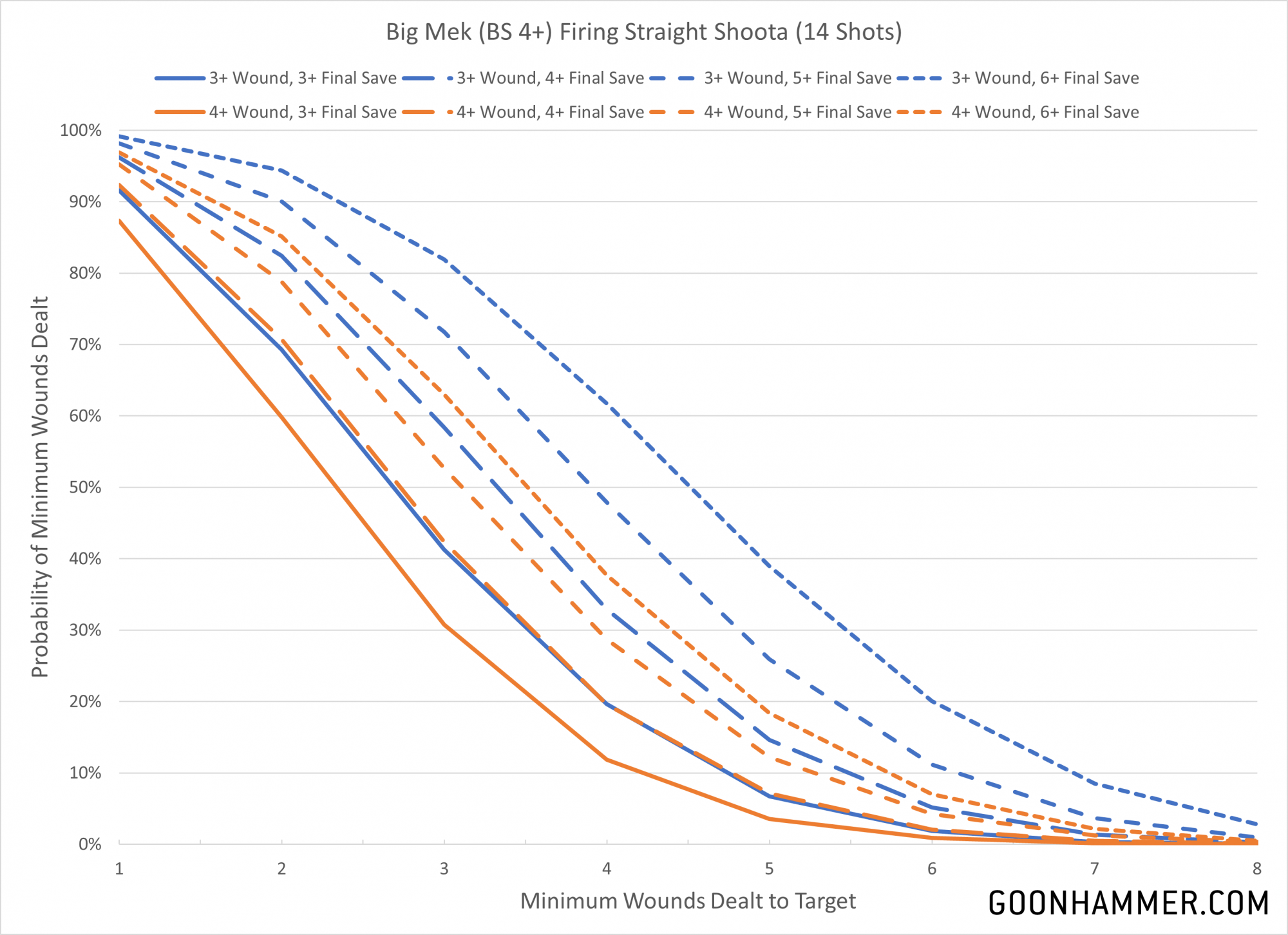 Not content in letting the Deathwatch having all the fun, Blood Axe units armed with shootas can spend 1 or 2 CP on Speshul Ammo to upgrade their shootas to Dakka 4/2 guns with AP -1. Not a bad upgrade from the Dakka 3/2 profile with no AP, especially if you have 30 of them. For this analysis we’ll look at three profiles; T3/5+, T4/3+, and T5/3+. If there’s a particular target you’re interested in the AnyDice program works very well for this application. The results are pretty impressive, doubling the average wounds dealt to the T4 and T5 power armour targets and averaging 164% of the wounds to the T3/5+ target. In this case quantity definitely has a quality of its own. 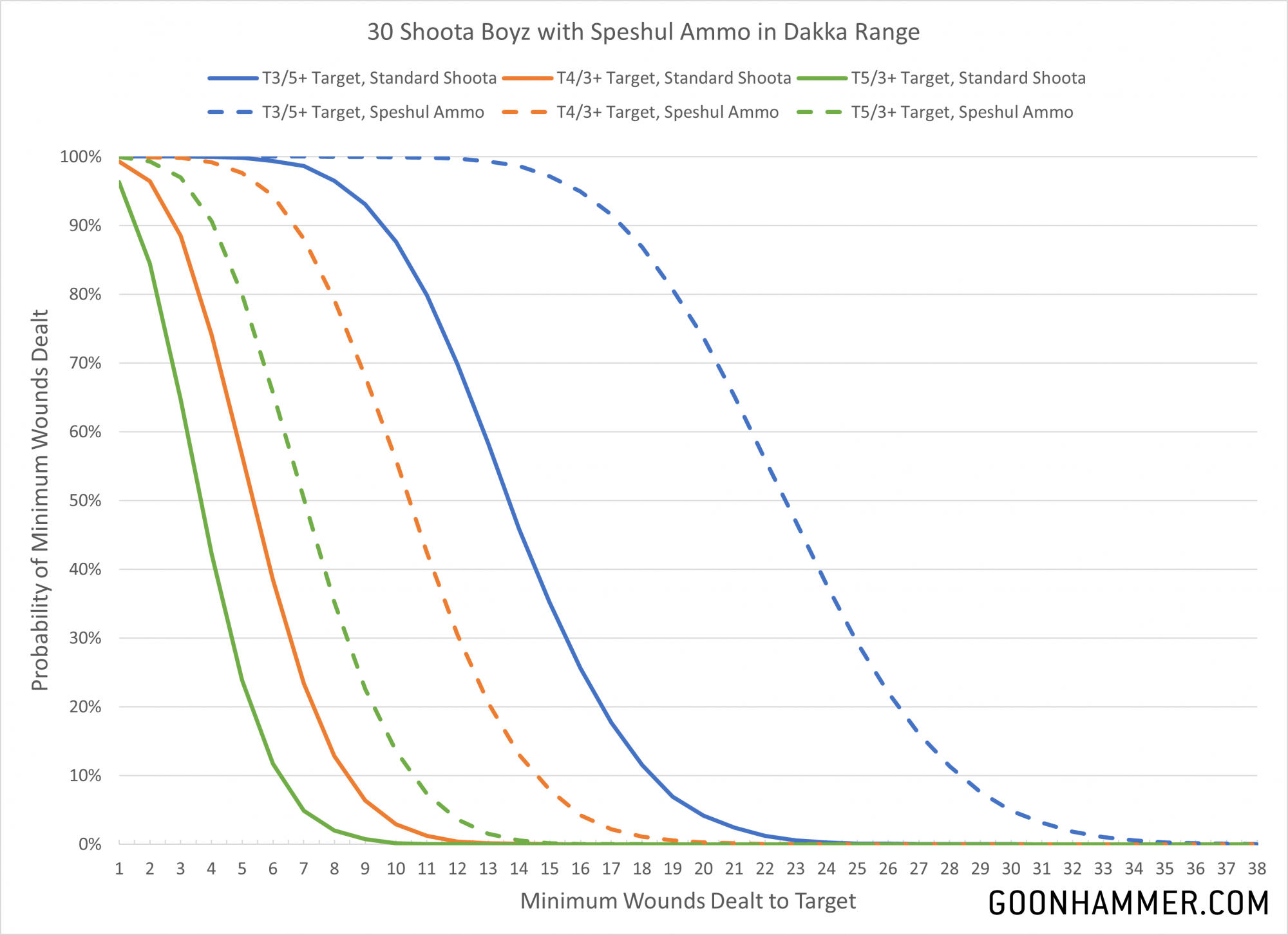 The math behind this one is pretty simple, but I thought it was so cool that I felt compelled to look at it. The Fight Detecta is the pinnacle of Ork technology, allowing a BLOOD AXE CORE unit to interrupt and charge an enemy that was foolish enough to show up nearby. Adding 2 to the charge roll and getting a re-roll courtesy of ‘Ere We Go means that the unit has a 83% chance of charging something 9″ away, 66% chance at 10″, 48% chance at 11″, and 31% chance at 12″.

GW added a ton of fun bonuses for speed-minded Ork players with the new Speed Freaks Speed Mob Army of Renown, and we expect to see a lot of changes in competitive play given that Orks also received a pretty significant shift in what’s permitted in the 2021 40k Balance Dataslate. In addition to getting significant bonuses courtesy of Adrenaline Junkies you can also spend 1 CP to having a charging SPEED FREEKS unit deal mortal wounds courtesy of Crashin’ Through. The amount inflicted depends on the unit. For BIKERS, every model can inflict a mortal wound on a D6 result of 4+. For VEHICLE units that aren’t Megatrakk Scrapjets or Kustom Boom-Blastas the result of 4+ inflicts D3 mortal wounds. And for those two particularly special buggies the result is D3 mortal wounds on a D6 result of 2-5 and 2D3 mortal wounds on a result of 6. Unfortunately this is NOT in addition to the D3 mortal wounds that each buggy will inflict on a 4+ thanks to its Spiked Ram ability, but you can get the D3 mortal wounds that the unit inflicts on a 2+ if you spend 2CP on Ramming Speed.

Even for one buggy the results are slightly better than the usual ratio of 1d3 mortal wounds for a CP that GW has previously used. 2 buggies have a 50% chance of inflicting at least 4 mortal wounds and can serve a viable threat to a character, while 3 buggies and Ramming Speed have a good chance of dealing enough mortal wounds to kill a Dreadnought. 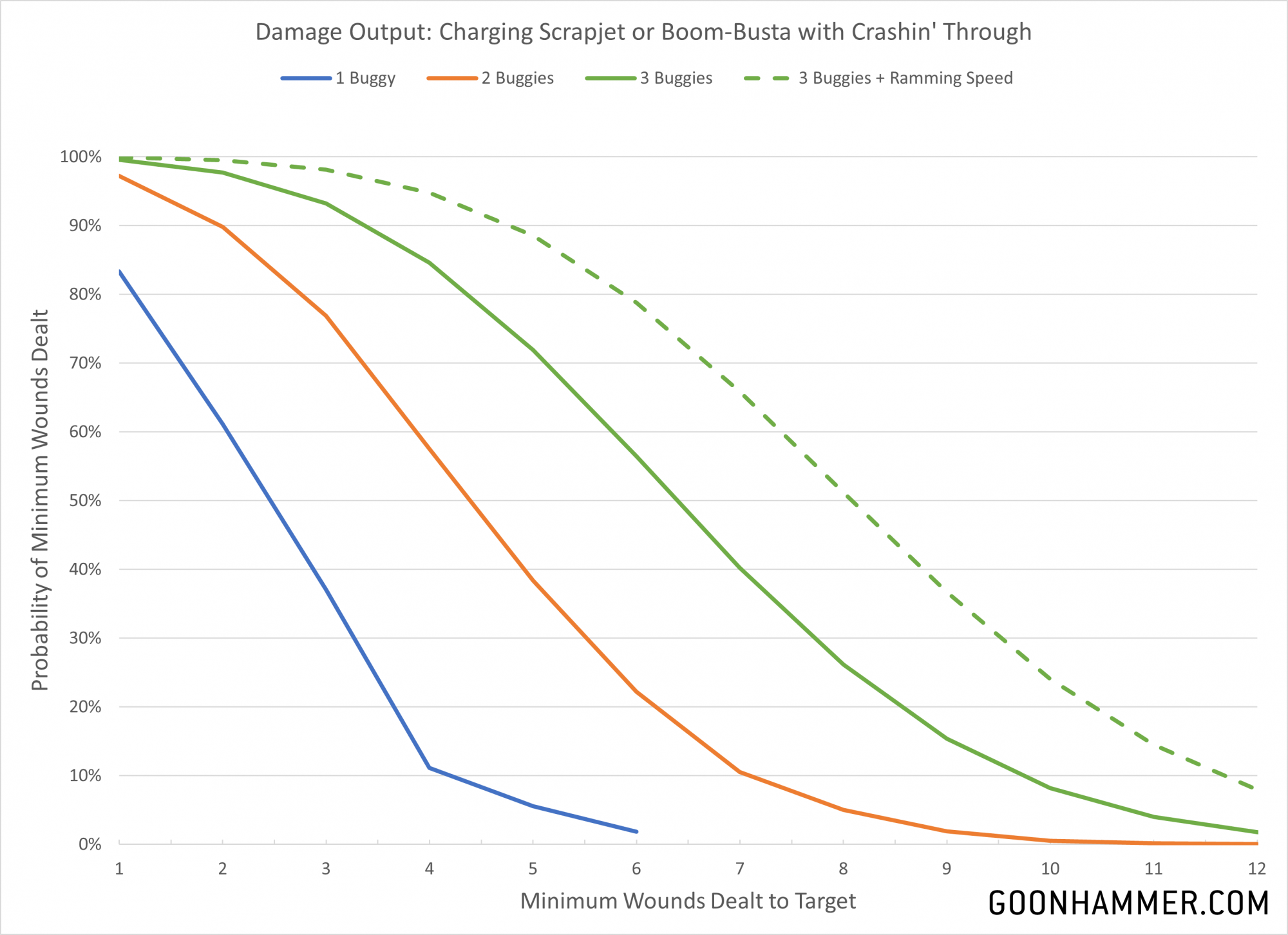 Ork players should definitely be excited by all the options available to them, whether they be sneaky gits who prefer a choppa in the back or speedy gits who prefer running down their foes in a plume of smoke and dust. I’m particularly interested in seeing what players do with the Speed Mob, as to me there is nothing more Orky than a horde of biker boyz firing wildly and crashing into the enemy.

Thanks for reading! If you have any feedback, feel free to drop a note in the comments below or email us at contact@goonhammer.com. You can also reach me directly via @PrimarisKevin on Twitter.