This week’s Hammer of Math takes a look at the effect of the different bonuses available to each Ork Kultur.

The (somewhat) new Codex: Orks is filled with cool new rules and models and we’re already seeing it take tables by storm, generating a healthy number of top 4 showings. With the release of several new models we thought it would be fun to look at the different Kulturs within the Ork book and take a look at the math behind how the different Clans affect the outcome of the game. Whether you’re a sneaky Blood Axe, a wealthy Bad Moon, a scarred Goff, or a loot-crazed Deathskull there’s something for you.

Many of the Kultur effects produce a modifier to hit or wound rolls, which provide a fixed bonus depending on the original probability. The chart below is a useful reference in those situations:

With that in mind, let’s dive into the Kulturs.

Bad Moons: Armed to the Teef

The Bad Moon Kultur provides two bonuses that both apply to ranged attacks. Bad Moons improve the Range characteristic of Dakka and Heavy weapons by 6″ (which means for Dakka weapons that the second profile is applied 3″ further), and every time a model makes a ranged attack the Amour Penetration of attack is improved by 1 on every unmodified wound roll of 6. I ran the numbers on the adjustment to probability for the Armour Penetration ability based on wound roll and saves ranging from 2+ to 6+, and regardless of the target values the effect is a flat 3% increase in probability of success. Bad Moons also have access to the Showin’ Off Stratagem for 1CP, which makes a Dakka weapon get an additional hit on an unmodified hit roll of 6 and provides a fixed 17% improvement in effective damage.

The Blood Axe bonuses don’t directly impact lethality. Instead they make the units more resilient to attacks by providing the bonus of light cover from attacks that are more than 18″ away and enabling models to shoot or declare a charge (but not both) in a turn that they Fell Back. The benefit of light cover is a +1 to armour saves. For a standard Boy with a 6+ save this allows the unit to have a save against AP -1 threats. Going from no save to a 6+ save is a 20% improvement in effective wounds.

The Deathskulls ability allows one hit or wound roll to be re-rolled, mortal wounds to be ignored on a 5+, and all INFANTRY units to get Objective Secured. Against VEHICLE targets they can also use Wreckaz for 2 CP to add 1 to the wound roll. The effect of the re-roll is dependent on two factors; the number of attacks and the probability of success for the roll. The more attacks that are inflicted, the less influence a single-reroll will have on the outcome. With respect to probability, the influence of a re-roll depends on both the chance that the re-roll will be needed and the probability that the re-roll will succeed. The formula is below, where P(X) is the probability of success for the roll.

What’s interesting is that the impact of the re-roll peaks when the probability of success is 50%; at that point you have the highest chance of both needing the re-roll and succeeding when you use it. You can see this in the chart below. Target values #1 and #2 are two die rolls which are independent of each other. With no re-rolls (first chart) we get a fixed probability. When we re-roll target value #1 (second chart) and subtract the difference (third chart) we see that the effect is highest when target value #1 is a 4+ (or 50%). 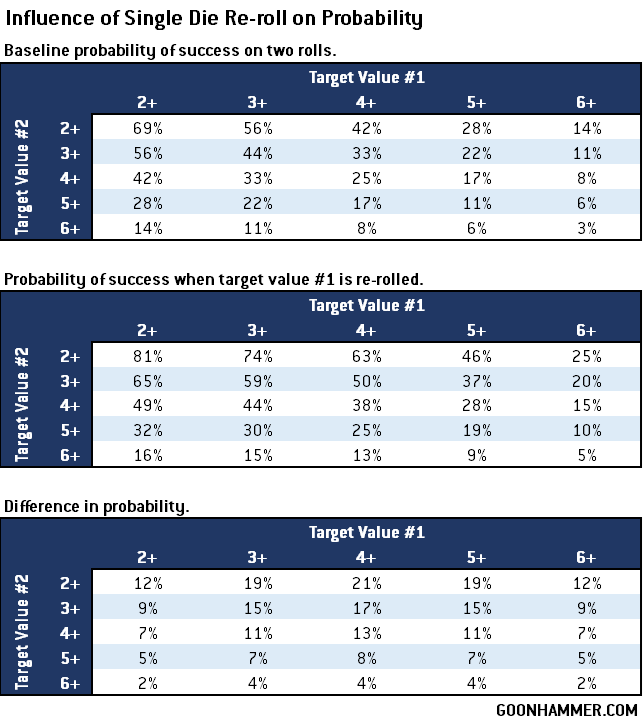 So what does this mean? If you are rolling enough attacks that you reasonably expect to fail both the hit and wound rolls then save the re-roll for whichever target is closest to 4+. If both target values are the same then re-roll the first failure as the improvement in probability is the same. If the number of attacks is low enough that you don’t reasonably expect to fail both rolls then re-roll the first failure.

Evil Sunz get a 1″ (2″ if they’re SPEED FREAKS) bonus to their Move characteristic, a bonus of 1 to Advance rolls, and the ability to ignore penalties to hit rolls for firing Assault weapons the same turn that they Advanced. The bonuses are simple but effective. In terms of improvements to probability the change is a 100% improvement to go from a 6+ to hit back to a 5+, and a 50% improvement to go from a 5+ back to a 4+ for units with Grot Gunners. As one might expect Evil Sunz are very good at overwhelming the enemy with both bodies and firepower.

Freebooterz get a +1 bonus to hit rolls until the end of any phase in which another Freebooterz unit destroys an enemy unit. Like the Evil Sunz bonus this translates to a fixed bonus, which in general will be 50% to go from a 5+ to a 4+. Note that the bonus does not stack with abilities like Grot Gunners, Gitfinda Squigs, or Warboss (Aura) because in 9th Edition die rolls can only be modified by a maximum of one.

Goffs are purely intended for melee, getting an additional hit every time a melee attack hit roll is an unmodified 6 and +1 to their Strength characteristic when they charge or perform a Heroic Intervention. They also have the Unbridled Carnage Stratagem for 2CP which produces an additional hit on an unmodified hit roll of 5+ instead of 6. In the absence of a re-roll these bonus hits provide a flat 17% improvement (33% with the Stratagem) to the expected damage dealt to the target. The step function that drives the probability of wound rolls means that the Strength bonus is situational, but in most circumstances the Kultur will provide a 25% to 50% bonus to probability.

Snakebites ignore unmodified wound rolls of 1-3 for attacks of S7 or less and SQUIG models with this kultur add 1 to wound rolls for attacks made after a charge move or Heroic Intervention. While good in theory, the fact that Orks are T5 means that only S6 and S7 weapons will be affected by this and reduce the wound roll for a 3+ to a 4+. This reduces the effect of incoming attacks within that window by 25%.

As one might expect the impact of the different Kulturs varies wildly and heavily depends on the kind of army you bring. Whether you like black and white checkmarks, red paint, blue paint, yellow paint, or the smell of squigs all of the Clans provide bonuses which can be effective. Of the Kulturs I would say that Deathskulls and Evil Sunz seem to be the most generally applicable, with few limitations and a bonus that every unit can benefit from.