This week’s Hammer of Math ignores the Edict of Nikea and taps into the warp to examine the powers and pacts of the Thousand Sons, as well as the inevitable outcome of those who dabble in them.

For most armies the Psychic phase is a bit of a sideshow. A few characters roll a few dice and sometimes an effect occurs. Sometimes things are manifested, sometimes powers are denied, and sometimes a Culexus shows up and murders everyone by relocating their soul into an unspeakable device of manifested terror. For the Thousand Sons the Psychic phase is their playground, and with the latest codex the followers of Magnus have even more toys.

New for Thousands Sons is the presence of Infernal Pacts, effectively magical Chaplain abilities which come from Infernal Masters and provide a bonus if the pact is successful on a D6 roll of 3+ in the Command phase. An Infernal Master can also use Malignant Pacts for 1CP to cause 1 mortal wound on a nearby INFANTRY or CAVALRY model within 6″ and change a failed pact to a success. Most of these effects are pretty standard, although Fires of the Abyss provides a very reliable source of D3 mortal wounds and Diabolic Savant is useful for generating Cabal points. The one that particularly caught my eye was Glimpse of Eternity, which allows you to re-roll one dice you have rolled. Note that the effect specifically calls out dice, not roll, meaning that it is identical to the 8th Edition CP re-roll and is much more powerful. You can see the effect below in the difference between the re-roll one die and re-roll all lines; the same is also true of charge rolls.

With the Brotherhood of Sorcerers rule every unit in the detachment gets a +1 to Psychic Tests, which is a significant bonus given how many tests a Thousand Sons player intends to make. The chart below shows the probability of a Psyker Test given all of the possible re-roll conditions, most of which are available to the Thousand Sons. To apply BoS to the chart below simply shift the desired result by one (so for a power with a warp charge of 6 your desired result is 5). Later on the article we cover the effect of abilities like Seeker After Shadows which allows you to roll an extra D6 for Psychic Actions before discarding one. 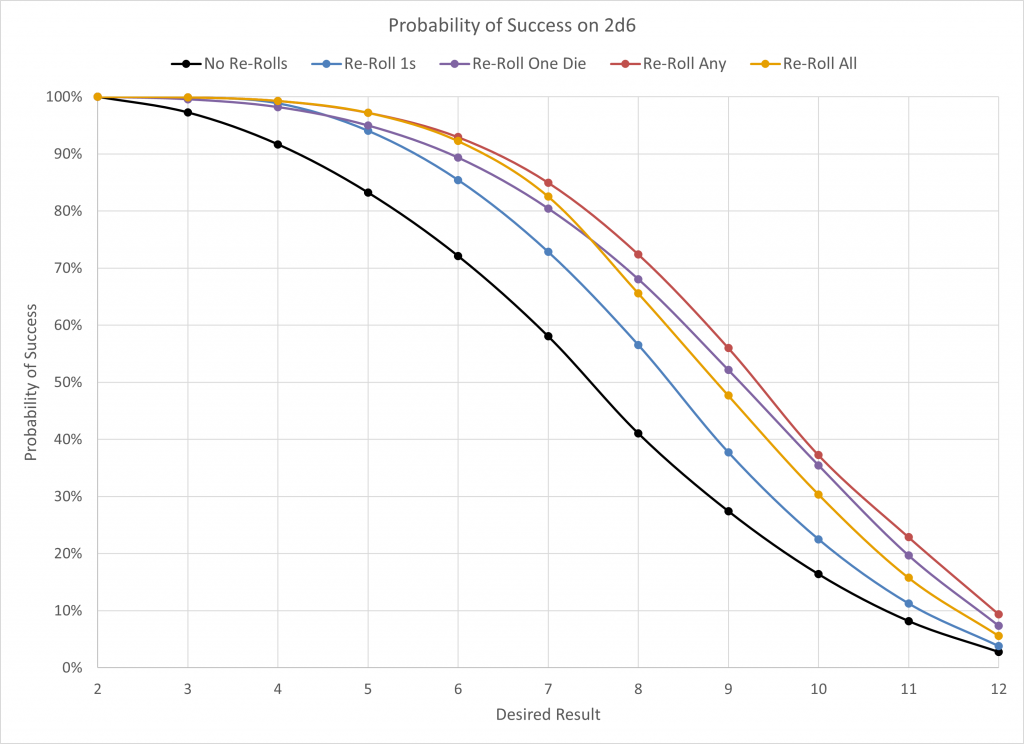 The majority of powers have fairly straightforward rules text: Achieve a success and get a direct effect. Games Workshop really took a careful look at the powers and made some significant changes, notably reducing the warp charge cost and reducing the complexity. Doombolt (WC 6) is a perfect example. Previously this spell was WC 9 and dealt 1d3 mortal wounds. Now it’s WC 6 and inflicts a flat 3 mortal wounds; much easier and more reliable.

Another good example is Baleful Devolution, which is a WC8 power that induces mortal wounds on a visible target unit with 6 or more models. You roll a number of D6 equal to the resulting Psychic test, and for every roll of 6 the enemy unit suffers 1D3 mortal wounds. You can see the resulting curve below; 50% of the time nothing happens but the potential for extra damage is there. Where things get interesting is that Thousand Sons give you a lot of ways to manipulate Psychic Tests. Properly configured this can do a lot of damage, assuming your opponent provides a viable target. 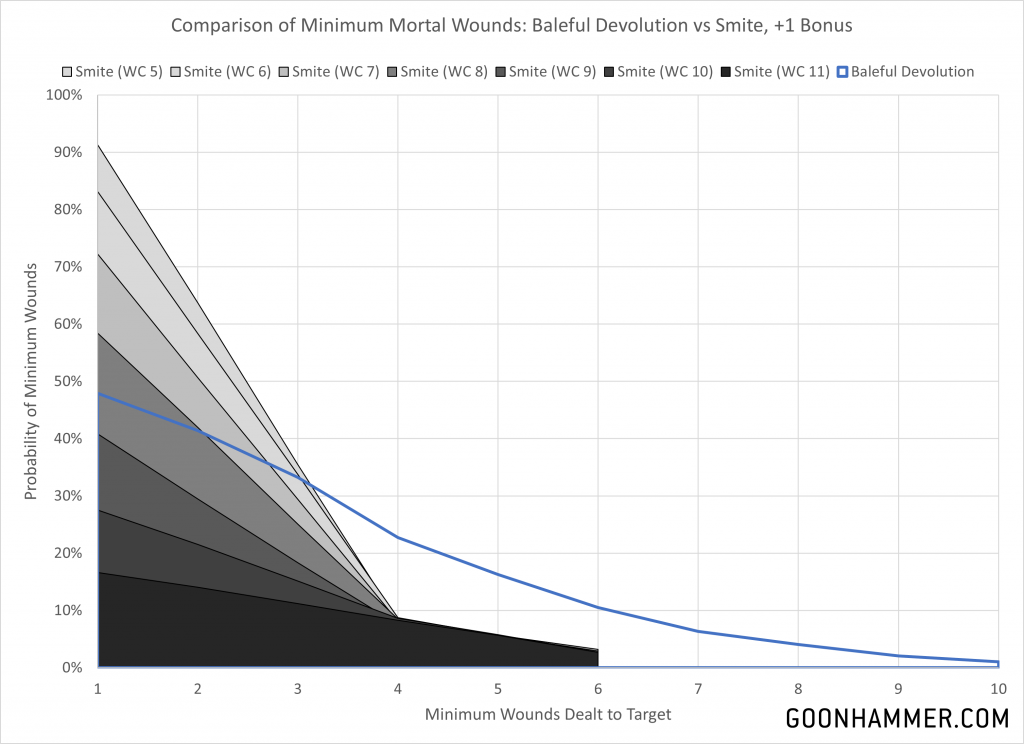 The Cult of Prophecy get access to three very interesting options. Divine the Future (WC 6) is effectively a diet form of Glimpse of Eternity manifested as a corrupted Miracle die, allowing you to roll a D6 and keep that roll to replace a single roll for a hit, wound, Advance, or charge roll along with a Psychic, Deny the With, or Morale test. The Guided By Whispers trait is interesting in that it effectively makes the model immune to charging from deep strike; as soon as a charge is declare the model can make a Normal Move up to 6″. Finally Oraculae Brazier is immensely powerful, allowing one CORE or CHARACTER unit within 6″ of the bearer to re-roll one hit roll, one wound roll, AND one damage roll every time the unit is selected to shoot or fight.

Cult of Time also get access to three incredibly powerful options. Time Flux (WC 6) allows you to return a destroyed model from a friendly Cult of Time INFANTRY unit within 6″ of the PSYKER. Depending on the unit this power can quickly pay for itself. Immaterial Echo is a Warlord trait that allows the Warlord to manifest an additional psychic power (that cannot be denied) if any Psychic test has a result of 9+. Note that this does not say “unmodified’ so bonuses apply. Assuming just a +1 bonus the Warlord will be able to manifest an extra power 42% of the time. Finally Hourglass of Manat allows the bearer to be resurrected, automatically, once per game.

The Seeker After Shadows Warlord Trait grant the Warlord two abilities. First, every time your Warlord attempts a Psychic Action you roll one addition D6 and discard one of your choice. The second is that the unit generates an additional Cabal point. The effect of getting to roll 3D6 and drop 1 is shown below, along with a few notable re-rolls. Note that when combined with Glimpse of Eternity and Brotherhood of Sorcerors a Warlord with Seeker After Shadows could hit an 11+ result 70% of the time. While this effect is of limited utility when it comes to psychic actions, which typically have a low WC, it could come in handy for the Mutate Landscape psychic action, or if you’re worried about being denied by Grey Knights or some other cheeky opposing psyker. 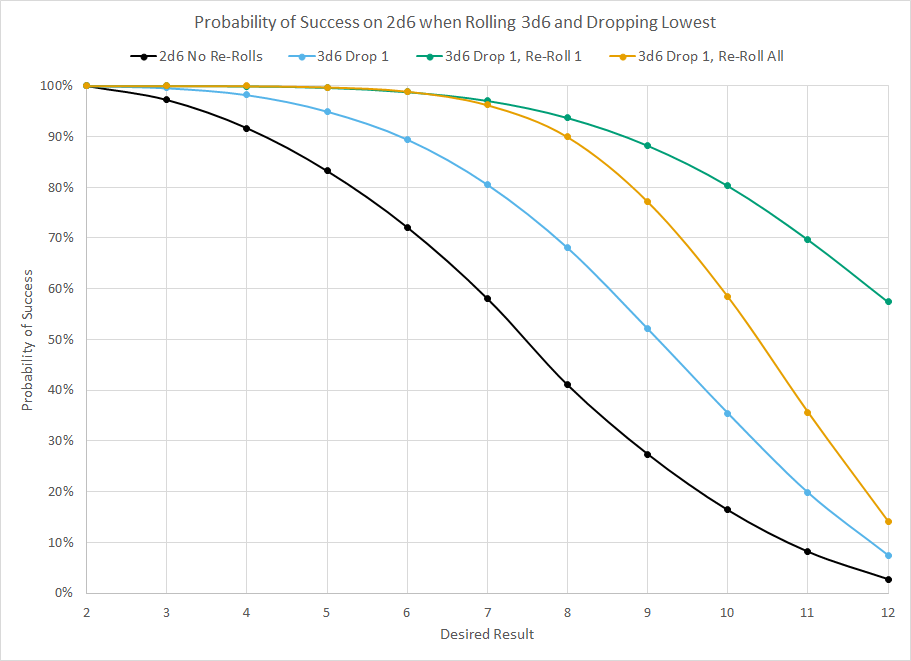 Reader Pasch submitted an interesting question via our submission form. They want to know which mutation is preferred when you apply Fated Mutation for 1 CP, which allows you to choose a mutation for a unit of Chaos Spawn instead of roll for it. You also happen to get a bonus attack for each model, which is handy. Chaos Spawn are absurdly cheap Fast Attack units which exist solely to run into things are murder them. At 23 points these T5 critters with four wounds get 2D3 attacks at S5, AP -2, and D2. They have three mutations. Razor Claws changes their melee attack to AP -4. Grasping Pseudopods changes their attacks from 2D3 to 3D3. Toxic Hemmorhage allows them to re-roll failed wounds. Because we’re dealing with a wide range of save and wound targets the easiest approach is to calculate the expected wounds for each combination and see which solution is optimal. The results below assume that you’re using the Stratagem to induce an effect and therefore will also gain an extra attack. We quickly see that all three effects have their place. The razor claws are most useful against targets of T5 or lower with saves of 2+ or 3+, the grasping pseudopods more effective targets of T5 or lower with higher saves, and the toxic hemorrhage is preferable against the tougher stuff. 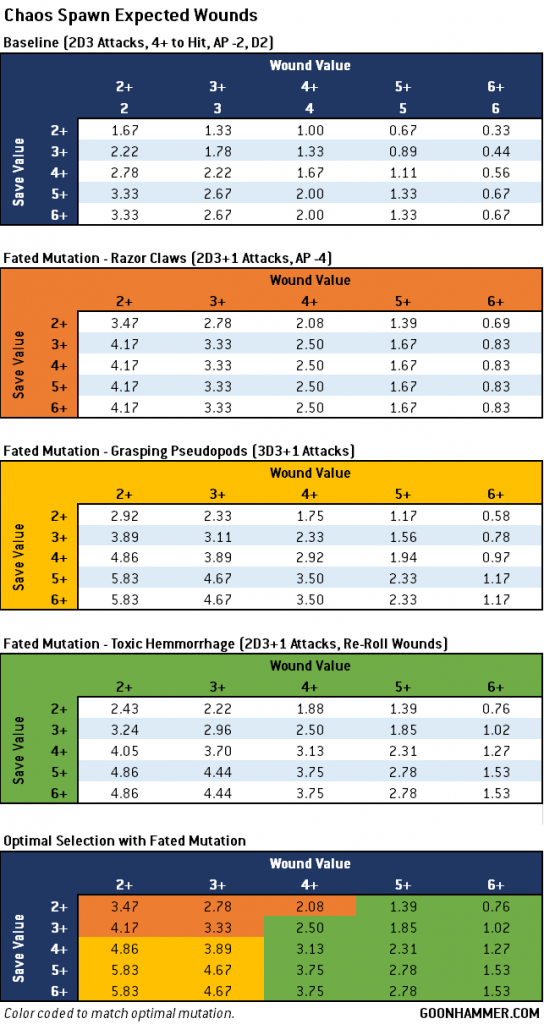 This is actually my 100th Hammer of Math article and I just wanted to extend my sincere gratitude to all of you readers. In the past two years I’ve done my best to take an in-depth and careful look at the numbers behind our favorite games, and it’s been a real adventure learning everything with you. From calculating the probability of a Warlord Titan killing a Leviathan Titan, to the ballad of Space Wolf Lord Smashwolf Wolfsmash the Second, to the 80,000 of you who viewed my most popular article on Primary and Secondary Objectives, this column has gone in a lot of different places within the realm of miniatures games. Some of the best ideas (such as the one above on optimal mutations) come from you, so if you have any ideas as to what would make a good article please submit them here. I read every suggestion.

If you have any feedback, feel free to drop a note in the comments below or email us at contact@goonhammer.com. You can also reach me directly via @PrimarisKevin on Twitter.