Hammer of Math: Personal Taste and Unscrupulous Players – The History of Scatter

In celebration of this week being GOONHAMMER ’96 (retro week), this week’s Hammer of Math takes a look at the iconic (but sadly missing from 9th Edition 40k) scatter die. If you’re an avid Necromunda, Titanicus, or Horus Heresy player however, you’ll still find the math content here helpful.

For several decades Warhammer 40k took advantage of the model-based nature of the game to use templates to represent the area of effect of blast and template weapons. This had a profound impact on how the game was played; the presence of an area effect weapon meant that it was always in your best interest to space models out as much as possible to minimize the damage (while maintaining unit coherency, of course). We’ve discussed the application of scatter and blast markers for both Titanicus and Necromunda, but the concept of an area effect weapon and scattering dates all the way back to the original Rogue Trader, published in 1987, and continued through 7th Edition and Horus Heresy. 40k games of those editions would feature armies of carefully spread-out models, each one positioned to the maximum distance that coherency or the terrain would permit. The saying “one grenade will get you all” was very apt.

The original rules for blast markers were fascinating, and represented the heavy emphasis on role-playing (and the presence of a Game Master). Players first put down an area effect marker somewhere within LOS and then rolled a D6. The probability that a weapon would scatter was based on the radius of the marker; a 1/2″ marker would only scatter on a 6, a 1″ marker would scatter on a 5+, and the value would decrease until a 2 1/2″ or larger marker would scatter on a 2+. Then the player chose a direction as 12 o’clock, rolled a D12, and that gave a standard direction relative to a clock face. Deviation was a flat D6, but the weapon would never deviate more than half the measured range. THEN the player rolled to hit against any model which was under the marker, with the GM optionally deciding that partially covered models could count as targets with a -1 to hit modifier. The rules literally say this was “largely a matter of personal taste”.

With the first actual named edition of Warhammer 40k saw the game take a step away from the GM and introduced the scatter and artillery dice. Instead of having to agree on what “1 o’clock” actually meant, players could roll the dice and be guaranteed a direction and distance. And if they rolled the dice near the blast marker they might even agree on what that direction actually was. In 2nd Edition players would first roll to hit as normal, and if the Hit roll succeeded the marker was placed directly over the center of a target model. Models wholly under the marker were automatically hit by the weapon, while models partially covered were hit on a 4+. If the shot missed then the player rolled a scatter roll, tossing the scatter and artillery dice. The scatter dice indicated the direction with an arrow (the hit symbol has a tiny arrow in one direction), while the artillery dice showed the distance of 2″ to 10″ (up to half the range) or a misfire. If the result was a misfire then the shot did nothing. If the result was a misfire AND the scatter die was a hit then the blast marker was centered over the firing model and the weapon was destroyed. Not the ideal outcome if you were throwing a vortex grenade.

Third Edition represented a massive shift in the philosophy of 40k; army size expanded considerably and many elements were simplified or eliminated entirely. The application of blast weapons was a perfect example; markers were consolidated from a variety of diameters down to 3″ diameter or 5″ Blast marker and the concept of scatter was only used for barrage and ordnance weapons. For direct fire blast weapons if you hit you put down the marker and looked to see what was hit, with partially covered models hit on a 4+. To avoid leaders or models with special weapons from being picked off with artillery (something only an “unscrupulous” player would do), the owner of the target unit had the option to move the Blast marker to another spot so long as it was in LOS to the firer and hit the same number of models (or more). Ordnance weapons were different; instead of a hit roll the player placed the large Blast marker down on the target. The player then rolled a scatter dice and a D6; the marker was shifted that many inches in the direction of the arrow. If the scatter result was a HIT then the shot landed exactly where it was placed. The defending player was not allowed to move it, meaning that Demolisher cannons were obnoxiously good at murdering characters. 3rd Edition also brought in the glory of the barrage weapon, the ultimate manifestation of player skill. Players who wished to fire a barrage weapon had to guess the range, and the marker was placed that distance away from the firing model in the direction of the target. Salvos of barrage weapons would see a chain of markers applied, with each one touching the previous one based on the roll of a scatter dice.

The rules for direct fire blast weapons largely remained the same as with 3rd Edition; if you hit the center of the marker was placed over a target model and if you missed there was no effect. The biggest change was that the defending player could remove any casualties inflicted from the unit as a whole instead of just from models beneath the Blast marker (but only if the weapon not ordnance). Ordnance weapons were made slightly less accurate; when fired from a moving vehicle the player rolled 2D6 to determine scatter distance and picked the highest. Sadly 4th Edition saw the death of guessing; instead the marker was placed over a model and then scattered 1D6 if the target was in LOS and 2D6 if it was not.

5th Edition saw the return of scatter for every blast weapon, regardless of whether or not it was ordnance. Instead all blast attacks operated the same way. The marker was placed over a target, and a scatter dice and 2d6 were rolled. As usual a HIT meant that the marker didn’t deviate, but an arrow now meant that the marker deviated a distance in inches equal to the 2d6 roll minus the Ballistic Skill of the attacking unit. Before 8th Edition BS was a numerical value that was translated into a hit roll; a BS of 4 (typical Space Marine) hit on a 3+. All models even partially under the marker were hit; no more 4+ rolls required. 5th Edition also extended the 4th Edition casualty rule to all blast weapons, meaning that it was no longer possible to snipe Sergeants with a battle cannon. Barrage weapons worked the same way, although if the target was outside of LOS the BS of the firer did not apply to the scatter distance. The rules for blast weapons remained the same in 6th Edition and 7th Edition as well as Horus Heresy.

Since this article is light on actual math I’ve provided a scatter chart for Horus Heresy below. To incorporate the effect of Ballistic Skill simply subtract the BS from the established distance. For example, with a BS of 4 the cumulative probability of not scattering is equal to scattering 4″ or less, or 16.7%. Note that probabilities on 2D6 are not uniform – you’re more likely to roll a 7 than any other result. Also note that the scatter die has two faces that read “HIT,” so one third of the time you aren’t going to scatter at all; this has also been accounted for in the chart below. If you’re worried about a Deep Strike mishap, consider placing your units at least 6″ away from anything that could ruin their entrance – even in Horus Heresy, that mishap table is real rough. 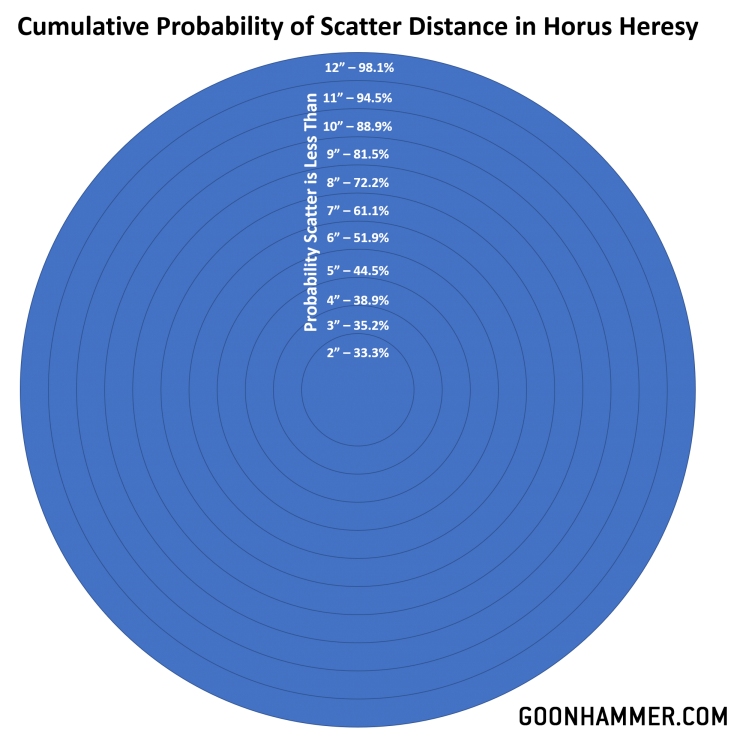 Note that Horus Heresy also uses the Apocalyptic Blast, Barrage, and Apocalyptic Barrage templates for attacks; these generally follow the same rules for blast weapons and scatter and will have the same probabilities, though note that the bigger the template, the less likely it is that scattering a small distance will matter with regard to hitting your intended target.

In 8th Edition the concept of area effect weapons was eliminated entirely; former blast weapons instead delivered a random number of hits to the target unit. This effectively killed the utility of blast weapons by drastically increasing their variance. Things improved somewhat in 9th Edition with the addition of the Blast keyword; now the number of hits dealt to the target changed depending on the size of the unit, but the days of placing pie plates on models are long gone.

Depending on your perspective the elimination of blast markers in 8th Edition was either a significant improvement in the speed of play or a loss of a major element of 40k. Without question removing blast markers sped up gameplay; while positioning is still crucial for melee, players are no longer forced to painstakingly space out every model with a 2″ gap to minimize the number of hits. As someone who’s played 40k since 2nd Edition nostalgia alone makes me wish for scatter dice and blast markers, but then again I’m also a huge fan of Necromunda’s style of play with no pre-measuring and feel that guessing ranges is a lot of fun. I think the Rogue Trader rule of using Ballistic Skill to hit after determining how many models were under the marker is particularly interesting.

Thanks for reading! If you have any feedback, feel free to drop a note in the comments below or email us at contact@goonhammer.com. If you have any combinations you think I should look at, or questions that you would like answered in a future article like this one, please submit them here.