In this week’s Hammer of Math Kevin and PierreTheMime takes a look at the resurgent Death Guard and how the presence of 2W Plague Marines is going to make life a nightmare for anyone trying to kill them.

Last month Games Workshop revealed that all Marines, including Heretic Astartes, would be boosted to two wounds. This provides a large benefit to a wide variety of forces, but for Plague Marines it’s particularly beneficial. In 9th Edition resiliency is crucial, as every mission allocates 50% of the victory points towards taking and holding objectives. Players must have options that not only allow them to secure those objectives but also hold them in the face of the enemy attack, and Plague Marines are particularly well suited for this task. They’re innately survivable thanks to their high toughness, power armor save, the ability to ignore any wound 33% of the time thanks to Disgustingly Resilient, have the Objective Secured trait which forces your opponent to either eliminate the unit or allocate (typically more fragile) troops to contest them, and they have options to some unpleasant firepower. If that wasn’t enough, there are a number of synergistic auras and stratagems in both their codex and Psychic Awakening expansion that greatly increase their longevity. In this article we’ll examine Plague Marines, the impact of doubling their wounds in the context of their abilities and options, and their offensive capabilities.

Firstly lets discuss a common misconception about the “Feel No Pain” effect, in this case named Disgustingly Resilient. The presence of an ability to ignore all wounds has a multiplicative effect on the number of basic wounds the model has. At first glance a 6+++ would suggest that the model is about 17% more survivable, but one must also consider that every point of damage that has to be dealt because one wound was ignored is also subject to the possibility of being ignored. This compounding effect means that the bonus is greater than the raw probability of success. The formula below provides the effective wounds based on the probability of success; in essence it’s the inverse of the probability of failing the roll.

This means that a 6+++ provides a 120% increase to the number of wounds, a 5+++ is effective 150% more wounds, and in the event of a 4+++ the wounds of the model are effectively doubled. You can also incorporate the possibility of re-rolls. For example a 5+++ with the option to re-roll results of 1 has a probability of success of 39% instead of 33%; apply the formula above and the resulting effective wounds jumps from 150% to 164%. In the context of Plague Marines this means that when the new rules drop Plague Marines will effectively have 3 wounds instead of 2. How will this change look against various attacks? 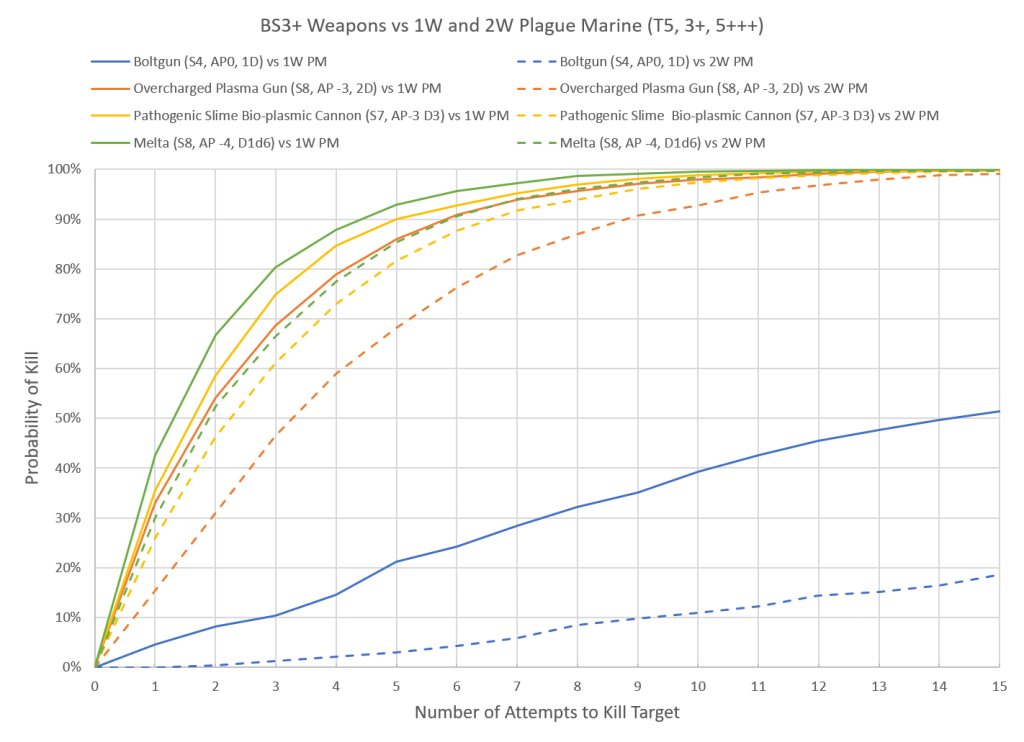 For the chart above 10,000 attacks were simulated and then attacks were counted until the target died. In scenarios where a large number of attacks are required to kill a target (like in the case of the boltgun) this results in a wavy line that’s not a perfect reference, but for the purpose of our scenario it should be fine. The bottom line is that a weapon on the scale of the humble boltgun had a 5% chance of dealing a single wound to a Plague Marine; double the wounds and now the chance of two bolter shots killing the target is 0.3%. Other weapons traditionally known for killing Primaris like overcharged plasma, the bio-plasmic cannon of the Exocrine (in this case boosted with Pathogenic Slime to make it an Aggressor killer), and even the anti-tank melta type will see their effectiveness drop when compared to killing the loyalist (or heretical but less diseased) equivalent.

Beyond the core model, Death Guard have access to a variety of Stratagems and abilities which can significantly improve their resiliency. In terms of absolute defense, Cloud of Flies (1 CP) would prevent the enemy from shooting the unit unless it’s the closest target. Putrid Fecundity (2-3 CP) adds +1 to the DR roll, making it a 4++ for that unit for the duration of the phase. The presence of a Plague Surgeon with Tainted Narthecium allows DR rolls of 1 to be re-rolled. Myphitic Blight-Haulers provide the benefits of cover to armour saves to all within 7″ thanks to Putrescent Fog (or simply the vast amount of cover a good board should have). The psychic power Miasma of Pestilence provides a -1 to hit penalty for units attempting to attack one unit (which is identical for dense terrain). Finally a Noxious Blightbringer wielding the relic The Daemon’s Toll can provide a 5+ invulnerable save to any DEATH GUARD unit within 7″. This provides a potent combination of defensive improvements which will only compound with two wounds. 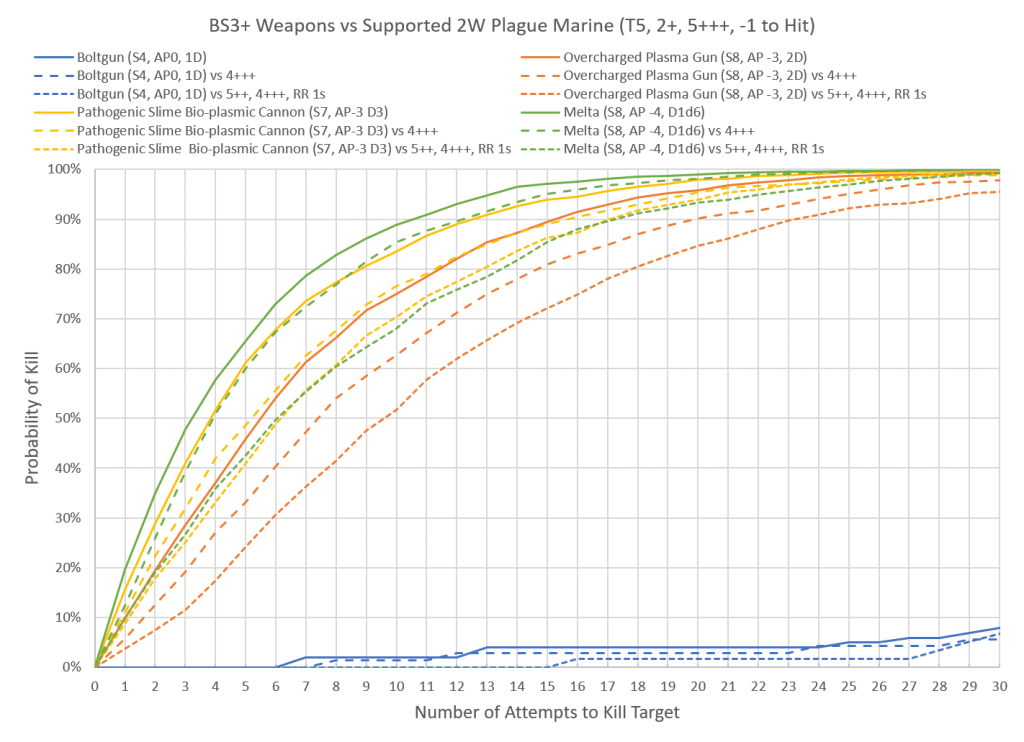 As you can see from the chart above, the benefits pile up quickly. With plenty of abilities and terrain to take advantage of, the potential for Plague Marines to stack the save bonus and hit penalty are very likely (particularly if players are going to be encouraged to bring their own terrain and Death Guard can fill the field with dense cover). Meanwhile Putrid Fecundity can be selectively applied to ensure that even a double-firing squad of Eradicators is likely to only kill a single Marine, and players who wish to push up the center will almost certainly include Plague Surgeon support. While not the worst option, the 5++ from The Daemon’s Toll is less useful if the unit already has cover as only an AP of -4 or greater will require the use of the invulnerable save against a model with a regular save of 2+.

Plague Marines aren’t just hard to kill; while known for a solid choice of special ranged and melee weapons, the War of the Spider has provided them a healthy selection of stratagems and auras that make even their lowly boltguns a substantial threat to many different targets. The chart below shows four different targets ranging from a Guardsman equivalent to a typical T7/3+ tank profile. The lines assume the presence of a re-roll aura from a Chaos Lord (or Lord of Contagion with Harbinger of Nurgle) and different Stratagems are shown. In addition to being very nasty support units with ranged and melee options, Myphitic Blighthaulers have can use Parasitic Fumes (1 CP) to increase the armor penetration of attacks against enemies within 7″ by 1. Plague Marines can fire Virulent Rounds (1 CP) to make their boltguns Plague Weapons and also hit an AP of -4 on a 6 to wound (and also benefit from the Arch-Contaminator Warlord trait or Hypertoxic Tinctures from a Plague Surgeon). Relentless Volleys (1-2 CP) makes the boltguns Rapid Fire 2, which is a significant bump as they can rapid fire at 18″. Finally, although not shown on the chart below, Veterans of the Long War (1 CP) can provide a +1 wound bonus to make things even more devastating. Depending on how valuable the target is Plague Marines definitely have a means of eradicating them, but players will need to be selective about their application if they don’t want to break the CP bank. 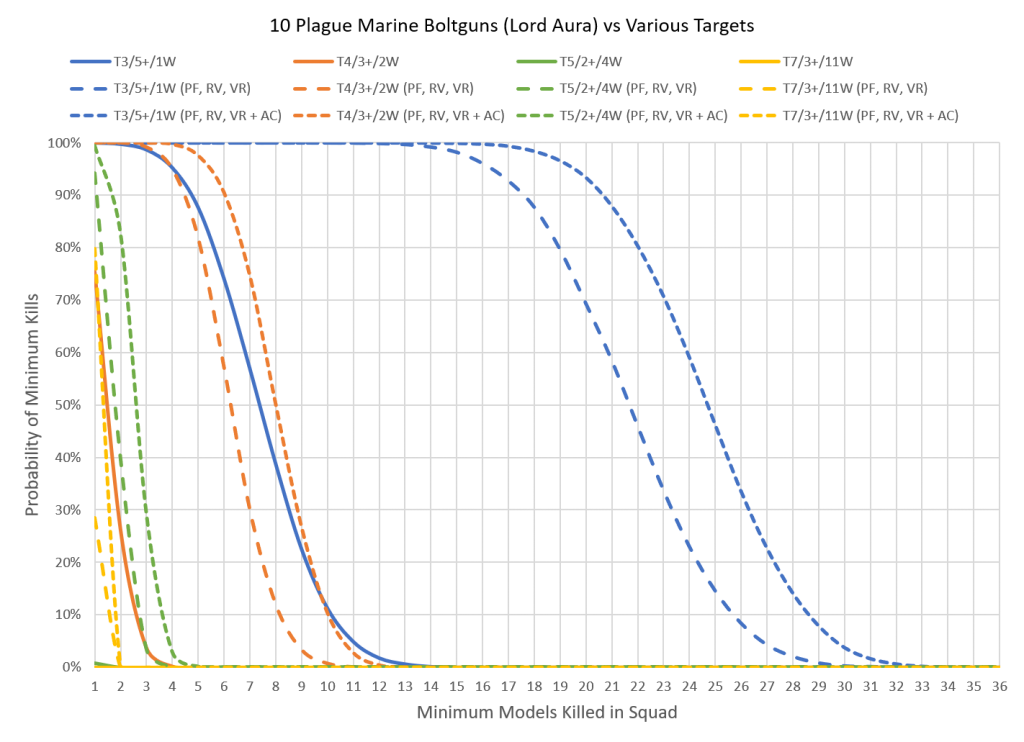 Already a force to be reckoned with, doubling the wounds of Plague Marines will make them an extremely potent option for contesting objectives and provides excellent synergy with the other Death Guard abilities. Even traditional Primaris killers like Exocrines will see their efficacy drop significantly against Nurgle’s chosen. The extra damage required to destroy these units means that players may also find themselves unable to deal with the host of other lethal units such as Plagueburst Crawlers. On the offensive front with the right allocation of Stratagems Plague Marines have the ability to threaten a myriad of targets with their boltguns. The only thing we don’t know is how many points these units will cost, but given that they are a core unit of the faction one would hope they’re reasonably priced.