This week’s Hammer of Math takes a look at the new stat lines for power weapons that Games Workshop rolled out in the new Codex: Space Marines and accompanying FAQ updates, and provides a bit of comparison to help you determine which option is the best for your forces.

Power weapons are a the staples of the 41st Millenia, featuring swords, hammers, mauls, claws, picks, mallets, gauntlets… basically any hunk of metal you can wire up and charge until it’s crackling with energized power ready to eviscerate a foe on impact. Feared everywhere from the battlefields of Armageddon to the underhives of Necromunda, these weapons can cleave through armor and flesh as if they were vapor. On the tabletop these weapons were generally considered somewhat milquetoast until recently thanks to their 1 damage output, with most of the emphasis placed on the heaviest options such as the thunder hammer, which combined fixed damage with a high strength bonus. With the release of the new Codex: Space Marines and the subsequent FAQs however, these options have all seen significant improvements and tweaks, both in terms of attributes and points values.

All of the 5-point power weapons saw major adjustments. Each of power axes, mauls, and swords improved their strength bonus by 1, e.g. power swords went from Strength: User to Strength +1, while lightning claws now grant an addition attack per claw, as opposed to only giving you +1 attack if you have a pair.

We also saw a shift on the 10-point weapons, though these haven’t been straight buffs and are more akin to balance changes: The relic blade received a boost in strength while the power fist was changed to a flat 2 damage, reducing the variance of attacks for it while reducing the potential upside. The thunder hammer was the only weapon to be nerfed: It now has a -2 AP instead of a -3 AP. Don’t ask me why the power fist is better at penetrating armour than a giant hammer; it’s not something I really want to think about.

For the 5 point weapons, we can ignore weapon skill and focus entirely on the expected damage given a hit, since these values will all be the same for a given model and we’re comparing weapons to each other. This is done by multiplying the probability that a wound will be dealt by the probability that a save will be failed. The strength of the attack is important due to the variation of the Toughness characteristic of the target; since these power weapons are primarily in the domain of Space Marines the baseline Strength is set to 4. Each table shows the expected number of wounds given the target’s Toughness and Armour Save. Note that because the lightning claw gives a bonus attack I needed to incorporate a means accommodating that effect. While the net is +1 attack, this impact is more meaningful on models with fewer attacks; going from 2 to 3 attacks is a 50% increase, while going from 5 to 6 is only a 20% increase. I conservatively assumed 5 attacks for the baseline, which is equivalent to a Space Marine Captain with a single lightning claw charging an opponent. As we’ll see, even with a conservative estimate, lightning claws are really good. 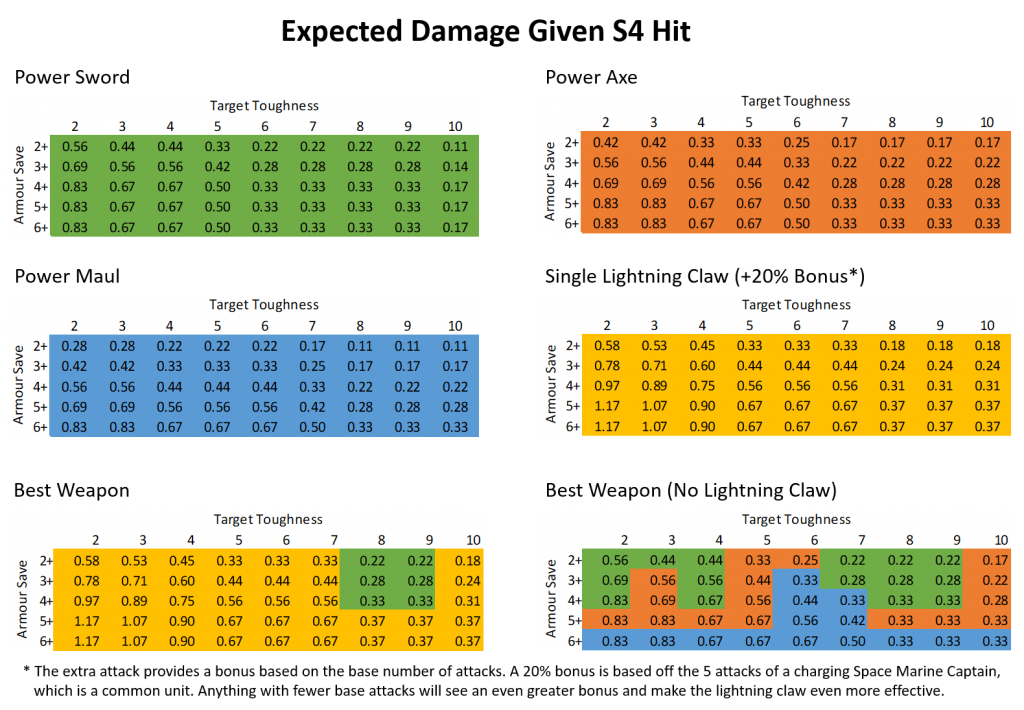 The results are compelling. Outside of a narrow range of toughness and high saves – at which point you may likely run into invulnerable saves that further blunt additional AP – the lightning claw is unquestionably the superior choice thanks to the combination of more attacks and the option to re-roll Wound rolls. This is in part because re-rolling wounds is better than +1 to wound when you’re up against a target with toughness equal to your strength or less; against targets with a higher toughness where you need a 5+ to wound, having +1 to wound is marginally better, and significantly so against targets where claws would need a 6+ to wound. But the extra attack will make up for this deficiency most of the time. Note that this assumes a relatively moderate boost from the extra attack; for units like Sergeants the effect is even more pronounced. Without the overwhelming effect of the lightning claw we see a distribution of values where each weapon has an advantage. For the region where single damage power weapons would be most effective (single wound models) you’re looking at a choice between the power sword and the power axe depending on the Toughness characteristic of the target.

Rob’s Note: Competitively, this is one reason why Vanguard Veterans are a much more compelling choice now, particularly for White Scars – being able to either add double lightning claws for +2 Attacks per model or outfitting them with a single lightning claw and storm shield makes them pretty nasty, and when you factor in the White Scars’ Chapter Doctrine for +1 Damage while the Assault Doctrine is active you’ve got an incredibly nasty unit that can take down almost any target in the game. For Chaos, it might be worth exploring Warp Talons now – even at their somewhat insane cost – because there are several easy ways to both buff their Strength to 5 (Creations of Bile, heralds of the same god), and make charges out of Deep Strike (Honour the Prince, Raptor Strike).

We can use the same approach for the more expensive weapons, with the caveat that we’ll need to apply a modifier for the Relic blade to take in to account the difference in Weapon Skill. Assuming a WS of 2+ seems like a conservative approach as the effect of a modifier decreases when the probability of success is high. With a power fist or thunder hammer the attack will hit on a 3+, and going to a 2+ to hit will be a 25% increase in expected damage. For the lightning claw this effect is multiplicative with the bonus from getting the extra attack, and the combined effect is a 50% increase. The chart also shows the expected kills dealt to 2W and 3W targets, which takes into account the possibility of overkill. This is done by making the damage dealt a function of the number of hits required by the weapon to kill the target. For example a power fist needs two hits to kill a 3W model, while the extra damage from a thunder damage is lost when attacking a 2W target. 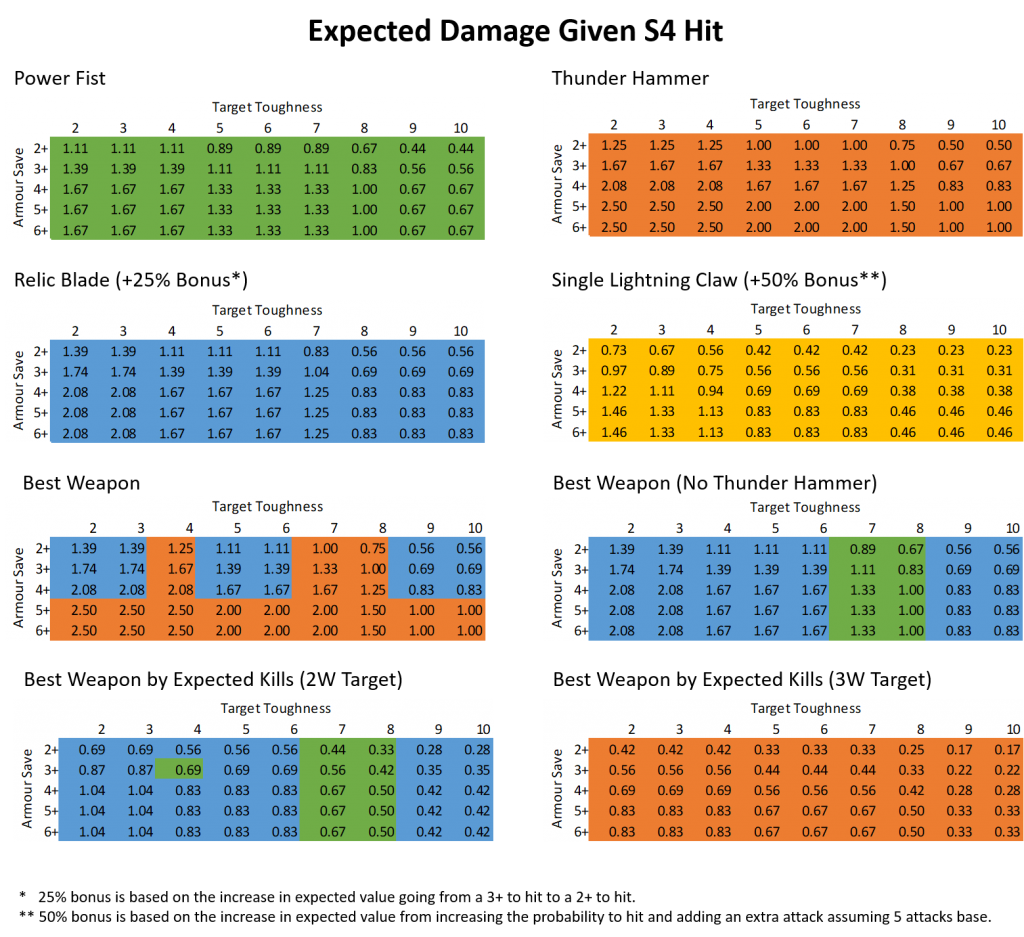 Unlike in 8th where the thunder hammer was the unquestioned champion, the combination of high strength and armour penetration actually make the relic blade a compelling option against several high-value threats. Remove the thunder hammer and the relic blade becomes even more viable outside of T7 or T8 targets where the bonus strength of the power fist offsets the improved Hit rolls. Things change significantly when you take the Wound characteristic of the target into account. The thunder hammer becomes significantly less effective when the third point of damage is nullified against 2W targets, while as you would expect against 3W targets the ability to kill them in a single hit makes the thunder hammer the superior choice. The single damage output of the lightning claw makes it inferior against multi-wound targets, although it remains the superior choice in all cases against single wound targets.

For Terminators there’s also the chainfist, which costs the same for Terminators and an additional 5 points for Relic Terminators. It has Sx2, AP -4, and deals either 3 damage to VEHICLES or 1d3 damage to everything else. As a 1d3 averages out to 2 the expected damage is slightly higher than the power fist thanks to the extra AP. In terms of expected kills it outperforms the thunder hammer against 3W targets with a 2+ save, but is inferior to the power fist and relic blade against 2W targets since there’s a chance that it will need two hits to kill a target.

Power to the Players

The changes to power weapons are fairly significant, and players will want to consider whether or not the added cost of a power fist or thunder hammer is worth the points depending on the preferred target.