Hammer of Math: Pushing the Reactor in Adeptus Titanicus

Greetings Princeps! This week’s Hammer of Math delves into the realm of tiny Titans and the probability of different outcomes when pushing the reactor in Adeptus Titanicus.

Adeptus Titanicus is a fascinating game of army building, strategic deployment, tactical prowess, and acceptance when your entire force is annihilated in a single phase by a cataclysmic series of unfortunate events. A key part of the game is balancing risk and reward, and there is no greater example of that than when a player is forced to push their reactor. Titans in the Warhammer 40,000 universe are powered by plasma reactors, immense and ancient furnaces containing the power of a sun to produce enough power to run an entire city. During the course of a battle a Princep will be tempted to push the limits of their reactors to the limits (and beyond), risking the wrath of the Omnissiah to move their war engine faster, reinforce their void shields, or fire a weapon of incomprehensible destructive potential.

In Adeptus Titanicus the capacity of the reactor is represented by a track of holes on the Titan Datacard, ranging from five to seven holes (and likely more with the incoming Warmaster). Holes are color coded based on the level of risk to the Titan. Green and yellow holes indicate normal operation, while orange and red holes indicate that the reactor is taxed beyond capacity will overload and damage the Titan in the Damage Control phase. The reactor is moved along the track every time the reactor is ‘pushed’, where the player rolls a 1d6 with several possible results.

So in general there is an 83% chance that the reactor will get hotter, a 17% chance that the marker will move two steps, and a 17% chance that the Titan will be forced to take a Command test and possibly lose the action. Command tests range by Titan and situation but are generally 3+ to 5+ on a 1d10, so the probability of losing an action is typically  between 3% and 6%. Why would someone run the risk of blowing up their own war machine? The benefits are significant.

When using Voids to Full! you are allowing saves to occur 17% more often than they otherwise would. This is because 1 in every 6 results will be re-rolled. So if your original probability was 50% or a 4+, with a re-roll the new probability is about 58%. A probability of 66% (3+) becomes 77%. As a result Voids to Full! is more advantageous to use early, when your save is a 3+. The more your shields degrade the less effective it becomes.

Another way to look at this question is the probability that a given attack will reduce the shields by a given amount. Void shields operate as a series of steps, downgrading from a 3+ to a 4+ before collapsing and requiring that they be reignited. For this we can use a binomial probability distribution based on the number of attacks, the probability of failure, and the desired outcome. To help with this I’ve provided some handy charts below showing the probability that a Titan will lose at least a given number of Void Shields to a specified number of hits.

To use the chart, start with the save of your Titan and whether or not the attack has Shieldbane. From there look at the row that indicates the number of hits received, determine what action (if any) you want to take, and look at the column showing the number of shields remaining. For example my undamaged Warlord Titan (3+ save) just received 8 hits from an enemy Warlord’s missile launcher. The Warlord can take 5 hits before the shields collapse, so from the chart I see that if I do nothing there’s a 9% chance that my shields will drop. If I use Voids to Full! that chance of failure drops to 2%. If I use Overload Void Shields the probability jumps to 96% because if there’s at least one failure then the shields burn out. I can also use this chart to predict how likely it is that I will drop from 3+ to 4+; a Warlord Titan can take 3 hits before the Void Shields drop in strength and given 8 attacks that has a 53% chance of happening normally or a 25% chance if I push the reactor and re-roll Save rolls of 1. 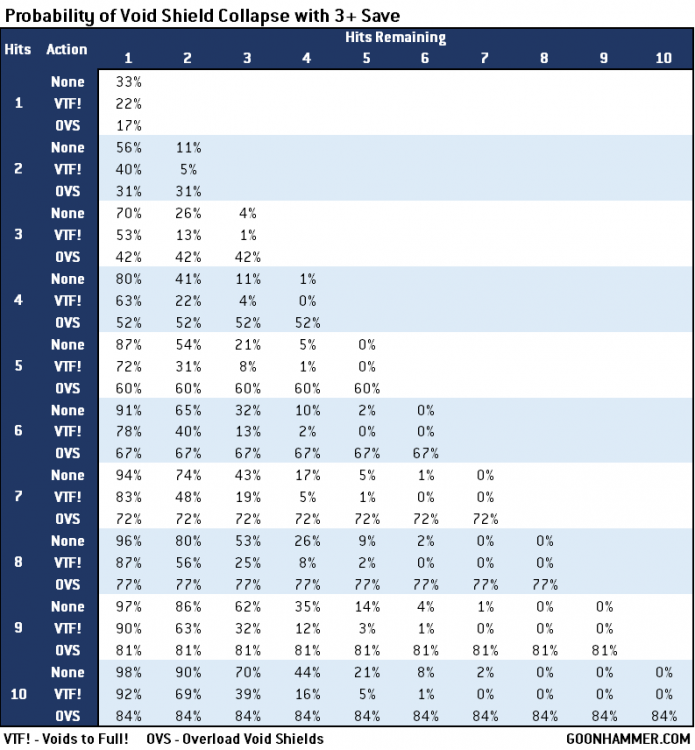 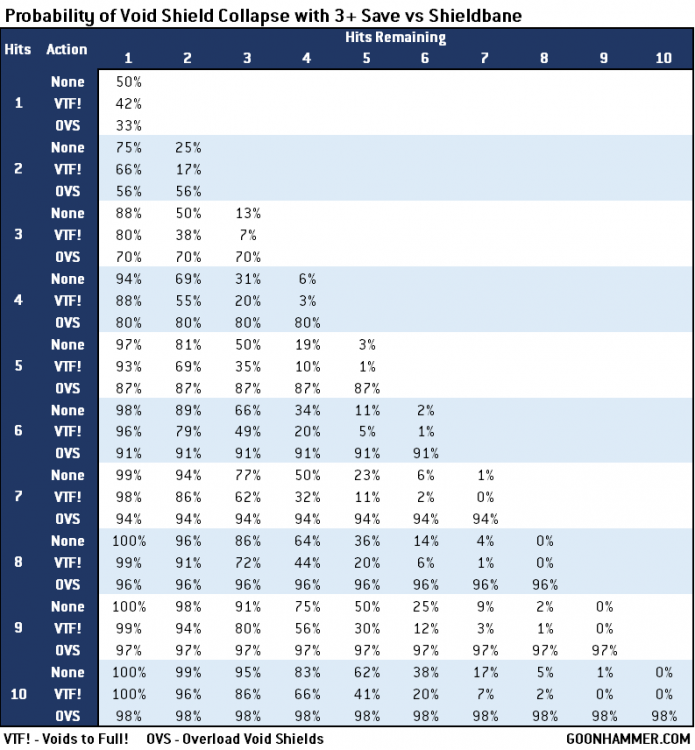 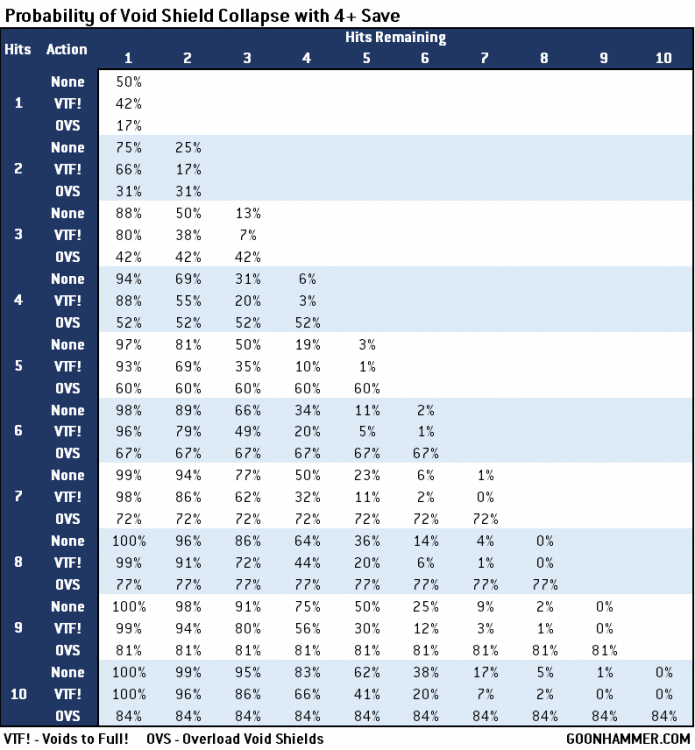 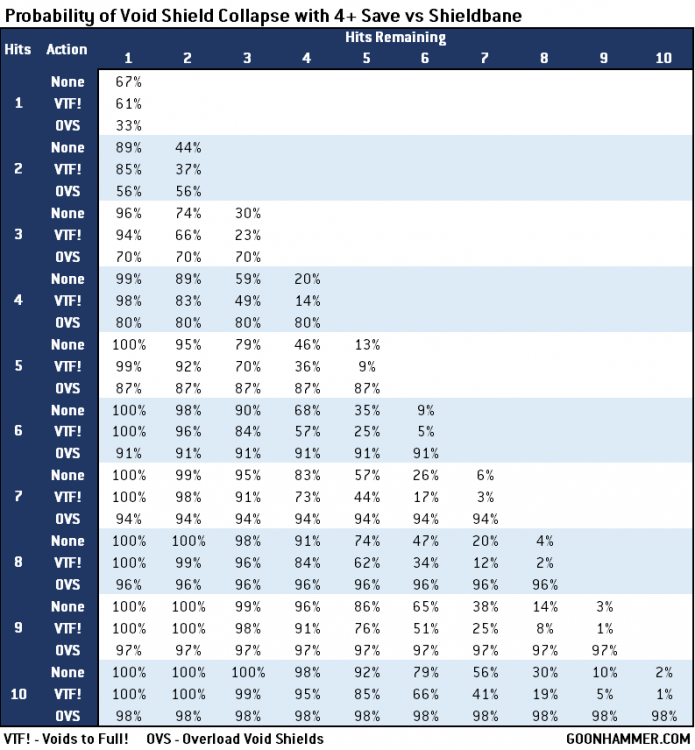 Adeptus Titanicus is a lot of fun, and if you’re interested I highly recommend you check out the extensive collection of quality articles done by the Warlord Wednesdays crew. This article just scratches the surface of the depth and variety of awesome things that can be done when you play with tiny stompy robots, and I look forward to providing more articles. Here are the major things to take away: