This week we’re going to answer a few questions from the questionnaire form! Please keep sending us ideas, they’re always incredibly helpful. This time we’re going to catch up on the Raven Guard and refurbished Black Templar options for Smash Captain Thunderdome. Let’s get to it!

First up we have reader Brunio, who has been waiting quite some time for me to address a missing Chapter that our good friend and fellow author Dan Boyd is a fan of.

In your article on smash captains, you left out Raven Guard from your analysis! While I realize their specialty lies more in delivering said captain to where they can get to work, do they have any particularly cheesy combinations of traits, relics, stratagems etc that can stay within sight of the other captain variations you presented?

Raven Guard have this really cool balance of flexibility and offensive power, and in the Tactical doctrine their Surgical Strikes ability makes being a CHARACTER unit practically a death sentence. While they lack the outright amazing bonuses to damage and attacks that something like a White Scars Captain can get, they have a MASSIVE advantage in terms of reliably getting to a target. Once the Captain is just outside of 9″ of the target thanks to Jump Pack Assault the player can use Strike from the Skies (1 CP) to add 1 to the charge roll result. The Imperium’s Sword Warlord trait allows a re-roll of any or all the dice, maximizing the probability of getting into contact. Alternatively the player could use The Raven’s Blade (1 CP) to re-roll the charge. Once the Captain is in combat they’re certainly no slouch, with a master-crafted thunder hammer doubling strength and dealing 4 damage on each hit. You could also use Gene-Wrought Might (1 CP) for a slight boost where unmodified hit rolls of six automatically wound the target. 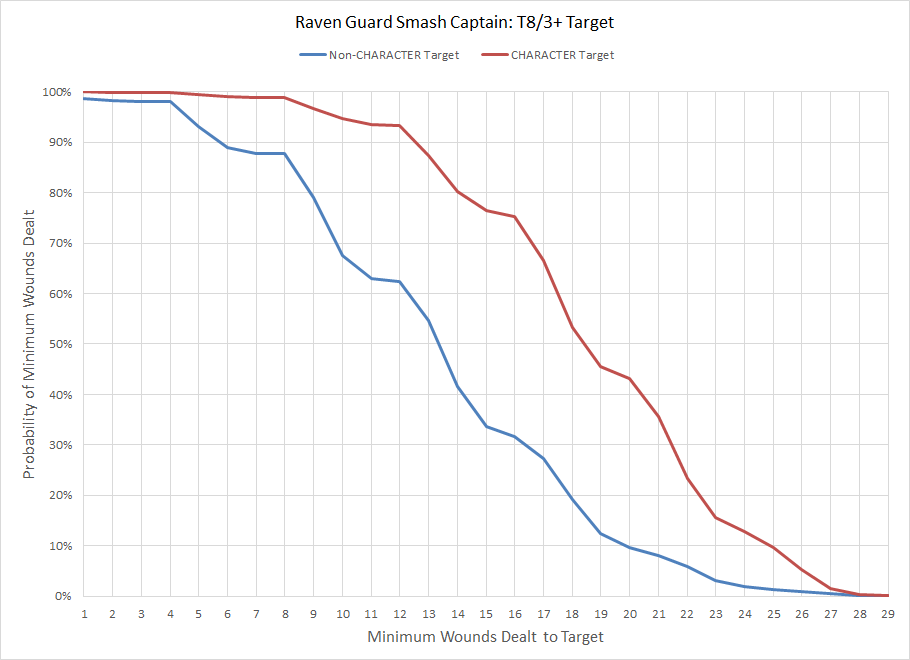 A 2% chance of killing a Knight in one turn isn’t really all that great, but the chances boost to 13% if the target is a CHARACTER. What’s interesting about this build is how little CP is required; Raven Guard don’t have any Stratagems which are really necessary for this build which makes using Honour the Chapter (3 CP) to fight twice much more palatable.

Reader Alec pointed out that we need to re-do our Black Templar from the first Smash Captain article because he’s no longer legal.

Can you re-do the optimal smash captain entry for the Black Templars please? The entry in Smash Captain: Thunderdome is now illegal. But since then we’ve had Faith & Fury come out.
Thanks! Love your content.

Unfortunately Faith & Fury was not particularly kind to the Black Templars, stripping away their ability to use Imperial Fists rules and replacing them with rules that are just okay but not amazing. In particular their core ability, Knights of Sigismund, is particularly weak since it requires the Assault doctrine, explicitly does not work against VEHICLE units, and only results in an automatic hit and wound on an unmodified roll of 6. While that’s not exactly a terrible result, it doesn’t compare to getting extra damage or a universal bonus to hit or wound like other chapters received. They also lost access to the multiple pages of Imperial Fist Stratagems, meaning amazing options like getting two Warlord traits are lost to them. They also lost access to the basic Relics every other Chapter gets, most notably the ability to master-craft a weapon for +1D. In exchange they got… nothing of note. Fortunately Master Swordsman is a decent trait that adds an attack and counts 1 hit as two on an unmodified roll of 6 (only one hit automatically wounds), and the Suffer Not The Unclean To Live (2 CP) Stratagem gives an additional attack and allows wound rolls to be re-rolled. As they are Space Marines Gene-Wrought Might (1 CP) is an option if the target is not a VEHICLE.

Unit: Black Templar Captain
Equipment: Jump Pack, Thunder Hammer, Storm Shield
Abilities: Shock Assault (+1A), Knights of Sigismund (unmodified hit roll of 6 automatically hits and wounds against non-VEHICLE), Assault Doctrine (-1 AP)
Warlord Trait: Master Swordsman (+1A, unmodified hit roll of 6 is 2 hits)
Relic: There is literally no option that helps this build. Of those available the Crusader’s Helm at least guarantees the Assault Doctrine is active.
Stratagems: Suffer Not The Unclean To Live (+1A, re-roll wounds), Optional: Gene-Wrought Might (automatic wound on hit roll of 6)

This results in 7 attacks hitting on 3+ (re-roll 1s, 6s produce 2 hits and 1 automatically wounds) at strength 8 (re-roll wounds), an AP of -4, and a Damage characteristic of 3. 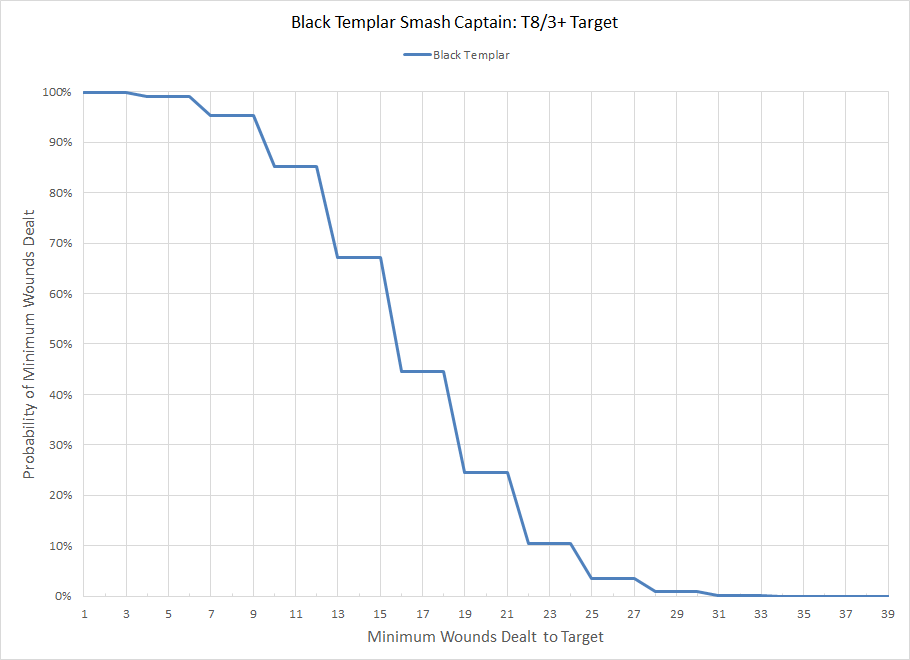 I thought Faith and Fury had hamstrung Black Templar Smash Captains, and with the loss of master-crafting that definitely happened. Instead of a 56% chance of one-shotting a Knight target they only have a 10%. This story would be different if that extra damage was an option, but for whatever reason GW decided they don’t get them. To make things worse getting them in combat is difficult as they lack the mobility that other chapters have.

How does a Lord Discordant hold up against a smash captain using the chance to kill a Knight rubric? An Emperor’s Children LD with Raiment Revulsive and Loathsome Grace seems viable. There’s also the Flawless Host LD with/without the warlord trait to consider.

I think a lot of people are pretty hype about Slaanesh options moving forward and are considering running some combination of heralds and disco lords with daemon engines as a possible add-in.

Lord Discordants are fairly terrifying units with a hilarious number of attacks that can easily be grossly expanded through the use of the right combination of Stratagems and traits. Each Lord starts with 13 attacks with various characteristics, and all can be modified through bonuses and Stratagems. As a DAEMON VEHICLE you can use Daemonforge (1 CP) to re-roll all hit and wound rolls regardless of the chapter, which naturally starts things off rather well. The Aura of Discord ability also gives every DAEMON ENGINE nearby a +1 to hit, which doesn’t help the Lord Discordant much until you take into account the Flawless Host ability.

For Emperor’s Children this comes in the form of the Loathsome Grace trait to add to strength and attacks as well as re-roll charge dice. While the Raiment Revulsive is a pretty awesome bit of kit that allows you to re-roll charge, hit, and wound rolls we already have that covered so instead we can use the Intoxicating Elixir to give an additional strength and attack. Emperor’s Children are also practically guaranteed to make a charge roll thanks to Honour the Prince (1 CP) which allows you to change the result of one of the die results on a charge roll to a 6.

Another, even nastier option requires the use of the Flawless Hosts renegade chapter. All Flawless Hosts have access to the Death to the Imperfect ability which allows an extra attack on a hit roll of 6+ (which is a 5+ for the Lord Discordant thanks to Aura of Discord). The Warlord trait Ultimate Confidence increases this bonus to three additional attacks, and if the Prescience (WC 7) power is activated the +1 to hit bonus means those extra attacks are going on a 4+. As Flawless Hosts are followers of Slaanesh they can also use the Intoxicating Elixir to get extra attacks and boost strength. In terms of “getting there” you can also take them in a Soulforged Pack specialist detachment from Vigilus Ablaze, which allows them to advance and charge. 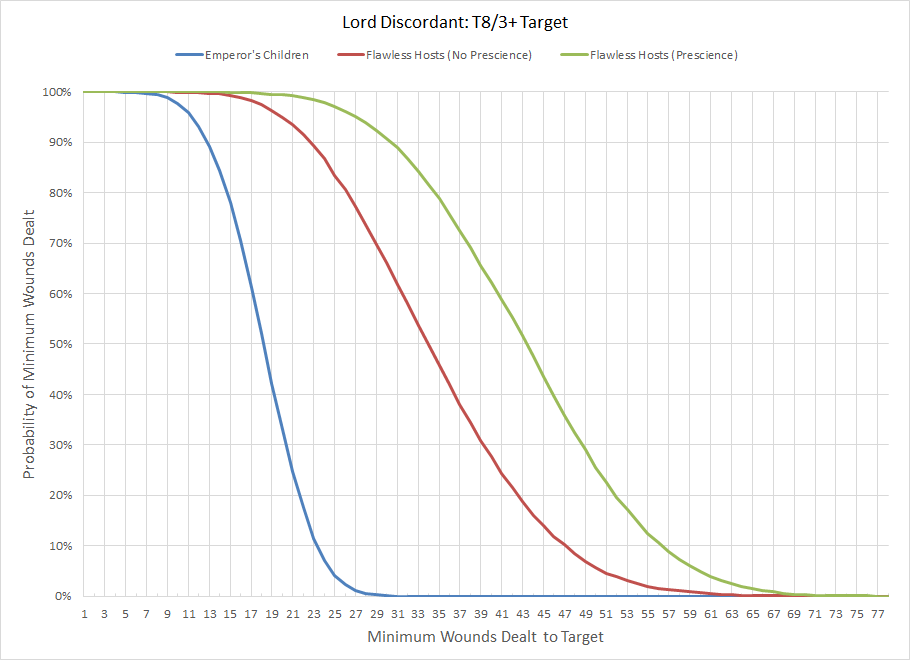 So there you go. Lord Discordants are pretty bad ass. The Emperor’s Children disappoints with a 8% chance of killing a Knight in one turn, but the Flawless Hosts version with those massive number of bonus attacks can murder the Knight 87% of the time (or a whopping 98% of the time with Prescience active). This is a perfect example of how powerful additional attacks and hits can be, especially when combined with a re-roll to increase the chances of getting those bonus attacks even further. For even more insanity, add a detachment of Chaos Daemons so that you can use the Locus of Grace (1 CP) Stratagem to allow every wound roll of 6+ to deal an additional attack.

Thanks for your questions!

I hope the answers were useful to the submitters and to everyone who reads it. If you have any comments, feel free to drop a note in the comments below or email us at contact@goonhammer.com. If you have any questions that you would like answered, please submit then here.