We’ve been linking a questionnaire form for you fine readers to submit ideas for us to explore, and this week’s article will be the first of those Quick Hits. Get it? Hammer of Math? Quick Hits? We know it’s that kind of comedy that brings you back, reader. Thank you.

Our first question comes from Julian, who asks:

How many infantry models need to be in range of a Plague Surgeon for his re-rolls of Disgustingly Resilient to make his points back? Nurgle daemons can produce a similar effect with either a strat or Epidemius, so the calculation should work here as well.

For the purpose of this question I’ll interpret “make his points back” to mean that the Plague Surgeon preserves a quantity of wounds whose value equals the 60 point cost of the Plague Surgeon (or the 100 point cost of Epidemius, but he does a LOT of other cool things as well). Disgustingly Resilient is a 5+ Feel No Pain, which means it works against every wound (including mortal wounds). This is extremely powerful, as every wound that is saved still has to be removed by a future attack. And a portion of those wounds are saved as well, repeating the process for countless iterations until finally the thing dies. The formula for calculating the effective number of wounds that particular save gives is:

So a 6+ save effectively multiplies the wounds by 120%, a 5+ save 150%, 4+ save 200%, 3+ save 300%, and a 2+ save 600%. This is one of the reasons why things like Stratagems giving Knights a 3++ save is so imbalancing; the increase in effective wounds is as dramatic as going from no save to a 4+. The Plague Surgeon’s Tainted Narthecium allows players to re-roll any Disgustingly Resilient rolls of 1 for Death Guard INFANTRY units within 3″. This is a flat 16.7% improvement to the probability since only 1 in 6 attempts will result in a re-roll. This changes the Death Guard roll from a 33.3% chance of success to 38.9%. In terms of effective wounds this changes the multiplier from 150% to 164%. That 14% difference is the influence of the Plague Surgeon. If we divide the 60 point value of the Plague Surgeon by that 14% we get the value of models that must be around him in order to make back his points. That value is 429 points, minus 60 for the Surgeon himself (since he boosts his own DR rolls), for a total of 369 points (nice), or 74 Poxwalkers.

When it comes to surrounding the Plague Surgeon with units that will actually make that value back, things can become a bit more complicated. We chose Poxwalkers here because, without an armor save (the Poxwalkers’ armor save is 7+), their effective wounds are entirely dependent on their Disgustingly Resilient ability, making them ideal for doing effective wounds/value earned back math. If you want to determine what other units to best surround your Plague Surgeon with, there are two schools of thought you could take:

There’s no “right” answer here, but in either case, the general guideline is that you need to keep your Plague Surgeon near a lot of points if you want him to earn his value using the Tainted Narthecium.

Last week I discussed how Blood of Baal changed the math for some Tyranid options, and included a few “Smash Monsters” that took advantage of the Murderous Size Adaptive Physiology benefit. Reader Reaper asked me to follow up with what I agree was a significant omission:

What about the Reaper of Obliterax on a Flying Behemoth Hive Tyrant with Monstrous Size, Adrenal Glands, Toxin Sacs and a Heavy Venom Cannon? Chances for a successful charge and killing potential, please. 🙂 Deep Strike in, shoot something with the HVC to boost itself with Hunter’s Drive for that sweet 9″ 90% charge probability. Buff up with Unstoppable Hunger, get in there. Drop Voracious Appetite to re-roll the wounds, for your S7 -3 AP Reaper, that will wound a Knight on 4+ thanks to Unstoppable Hunger for 4 damage, or for 9 damage on a wound roll of 5+! Rinse and repeat with Fight Again Stratagem if needed.

Next up is the attack portion. The Hive Tyrant in question is bolstered by several abilities and powers. The Reaper of Obliterax is an enhancement to the monstrous lash whip and bone sword weapon (User Strength, AP -2, 3 Damage, and even if the bearer dies it still gets to fight) which doubles the weapon’s damage on a wound roll of 6+. Toxin Sacs have a similar benefit, increasing the damage dealt by 1 on a wound roll of 6+. Murderous Size is an Adaptive Physiology which improves the Strength, AP, and Damage of a weapon by 1. Unstoppable Hunger is a new WC7 power from Blood of Baal which adds 1 to the wound rolls of melee attacks for a unit. And Voracious Appetite is a 1 CP Stratagem which allows a MONSTER or CHARACTER unit to re-roll wounds. The end result is 4 attacks which have the potential to do 9 damage on a wound roll of 5+. The previous iterations didn’t do so well against a Knight (especially compared to the Space Marine Smash Captain options), but let’s see how this version does. 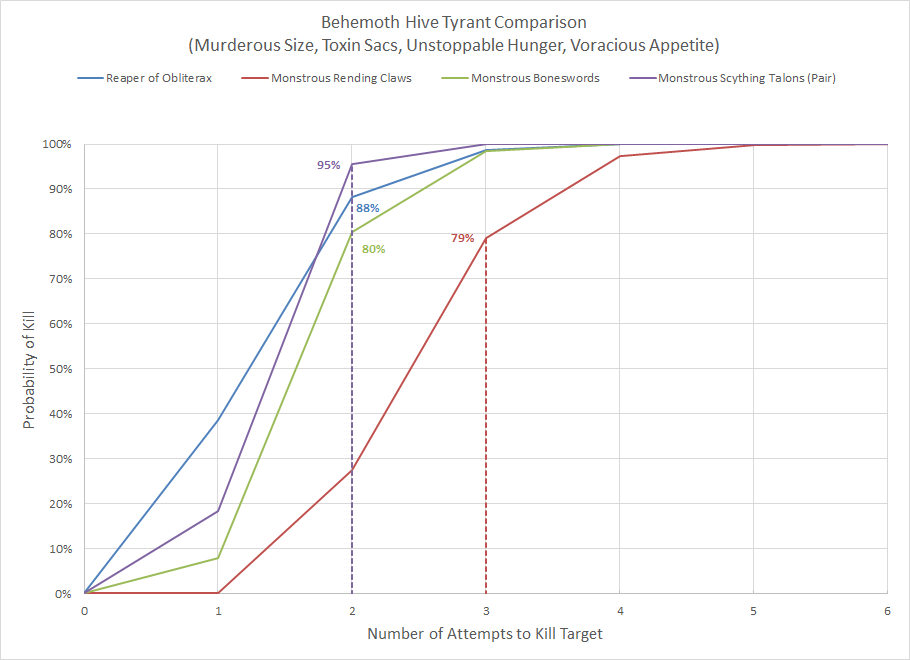 Note that these curves are different from last week’s because they also include the use of Voracious Appetite and the Toxin Sacs. What’s interesting is that while on average the Reaper of Obliterax attack did more wounds (19.9 wounds versus 17.8 for the pair of monstrous scything talons), the Reaper of Obliterax was far more spread out with nearly twice the standard deviation (9.3 for the Reaper, 5.0 for the talons). The Reaper was able to one-shot a Knight nearly 40% of the time, whereas the pair of monstrous scything talons had roughly half the success rate. The talons were more reliable in the long run, but the Reaper can absolutely put out an insane amount of damage. It’s definitely worth considering.

Thanks for your questions!

I hope my answers were useful to the submitters and to everyone who reads it. If you have any comments, feel free to drop a note in the comments below or email us at contact@goonhammer.com. If you have any questions that you would like answered, please submit then here.