This week’s Hammer of Math is looking at some user-submitted questions about the ravenous swarm that is the Tyranid faction. We’ll look over whether or not Psychic Barrage is worth the price paid, and exactly how hard is it really to murder a full horde of 300 Termagants.

Our first question comes from reader Gabe who wants to know the viability of using the Psychic Barrage Stratagem. This Stratagem costs 1 CP, requires 3 units of Zoanthropes with at least 3 models each to be within 6″ of each other, and target a point that’s visible to all three units and within 18″. Any unit within 3″ of that point will receive 3d3 mortal wounds on a 4+ with a +1 modifier if the target unit is 10 or more models and a -1 modifier if the target is a CHARACTER. Now we did the math on Zoanthropes awhile ago, so instead let’s look at the cumulative distribution of wounds for three consecutive castings of Smite from units of 3, 4-5, and 6 Zoanthropes and compare that to the output of Psychic Barrage depending on the number of targets. 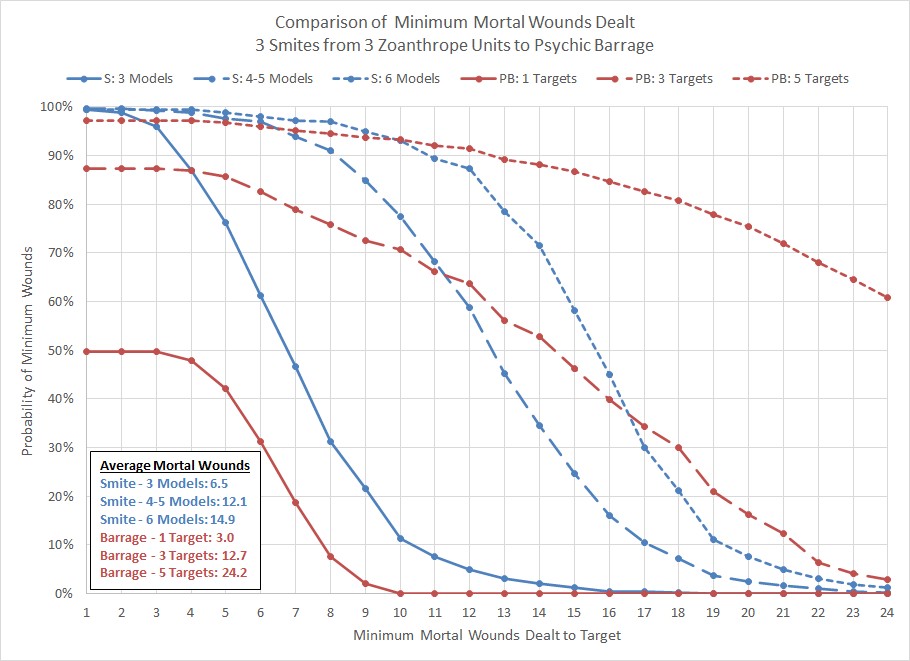 The blue curves represent the output of Smite for 3 units of Zoanthropes consisting of 3, 4-5, and 6 models. The red curves show the output of Psychic Barrage against 1, 3, and 5 targets within the 6″ diameter circle that can be affected. As one can imagine the efficacy of the Stratagem increases significantly as more targets are within the area of effect; if you can force your opponent to have three units within 3″ of the same point then on average the output will exceed three Smites from a unit of 4-5 Zoanthropes. The Stratagem also has the advantage of not requiring that the target be the closest target, which poses a challenge for using Smite. On average Psychic Barrage will deal more mortal wounds than Smite against 2 targets if the Zoanthrope unit size is 3, 3 targets if the unit size is 4-5, and 4 targets if the unit size is 6. Whether or not the player wants to make the investment of 9-18 Zoanthropes is up for debate, but in the right circumstances the effect can certainly be devastating.

Next up we have a question from reader Timothy, who wants to know what kind of firepower is required to kill 300 Termagants in six rounds, assuming a full set of buffs in the form of a Malanthrope’s Shrouding Spores ability (-1 to hit against units within 3″), the Encephalic Diffusion (2 CP) Stratagem (-1 to the S of incoming attacks) with a Maleceptor, and something like a 6+ invulnerable save (via the Adaptive Exoskeleton Hive Fleet Adaptation) or a 6+ Feel No Pain (via Leviathan’s Synaptic Imperative Adaptation). As one might imagine dealing 300 wounds in and of itself is a challenge, but things get even worse thanks to the fact that multi-damage weapons are rendered irrelevant. To find a solution to this problem we’re going to simplify it and assume that the Gants are not in cover and that the Feel No Pain or invulnerable save is the only save the model makes. This simplifies the probability chain to a single hit, wound, and save roll.

What we can do is convert the problem into an effective wounds scenario. The formula for EW is shown below:

The value for (1 – P(Save) is simply the inverse probability of making a Save; if a Save is a 5+ (33%) then the inverse is a 3+ (67%). We can combine the effective wounds for the probabilities of hit, wound, and failing the save to get a cumulative Effective Wounds which represents the number of shots needed to kill the target. Put them together and you get the formula below:

If the requirement is to kill 300 Gants in six turns then the attacking army needs to reliably deal 50 wounds. Put that number into the above equation along with various hits, wounds, and save values and you get the number of attacks required which is provided in the helpful chart below: 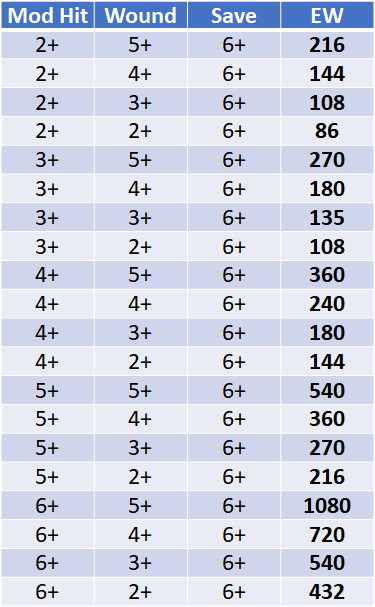 I verified the expected value findings with some iterative simulations and the numbers check out. Bottom line is that it’s really, really hard to erase 300 wounds off the board. This is particularly true when they’re suitably protected with penalties to hit and wound as well as invulnerable saves.

This week’s article is a bit light on words, but the data behind it was a lot of fun to put together. I thought the efficacy of Psychic Barrage was particularly interesting; properly positioned you can deal an inordinate amount of mortal wounds to a large number of targets. It’s also fun to see exactly how challenging a true Gant Swarm is to withstand before the opposition is overrun in a wave of chitin and teeth. The method can easily be applied to your own forces if you’re curious about how hard they are to kill against a particular threat.

Thanks for reading. We know that things are really challenging lately, and hopefully this article and the rest of our content provides some levity and entertainment. If you have any questions that you would like answered in a future article, please submit them here.