This week’s Hammer of Math looks at the biggest change to the Necrons since the discovery of green translucent plastic rods; the 9th Edition changes to Reanimation Protocols. Readers who aren’t familiar with the new codex are encouraged to read our exhaustive summary located here.

As the space undead equivalent to the Eldar’s space elves, the Space Marines’ space knights, and the Orks’… space orcs, one of the defining characteristics of the Necrons has been the ability to return from destruction. In 8th Edition the method was straightforward but cumbersome; at the beginning of every turn you rolled a d6 for every model in a unit that was destroyed. On a 5+ the model was returned to the unit with a full complement of wounds. If the unit had been wiped out then there was no opportunity to roll, but so long as the unit existed every model that hadn’t fled had the potential to come back. In 9th Edition the rules are drastically different:

For example, let’s say that I have a unit of six Skorpekh Destroyers (which have three wounds each). I lose three of them from an attack. Before the next unit can attack, I roll nine dice and tally up the number of results that are five or greater. I get five rolls of 5+, resulting in a pool of five wounds. Since Destroyers have three wounds each I’m allowed to return one of them back and the remaining two dice are ignored. The next attack I lose three more, forcing me to roll nine dice and get only two results of a 5+, meaning my dice pool is only two and no models reanimate. The third attack kills the final model and as the unit itself was finally destroyed reanimation protocols cannot be enacted.

Mathematically this is a fascinating approach, particularly since it works after every attack in contrast to a once per turn event from the previous edition. It essentially functions as an enhanced Feel No Pain that ignores excess wounds dealt and allows the units to suffer from attrition instead of an all or nothing approach. Thematically it seems cool as hell, with every attack slowly whittling down the attackers while some of them stand up attack after attack.

Games Workshop has intentionally limited the number of ways that reanimation protocols can be affected.

The Mathematics of Resurrection

To use the chart below, start with how many wounds are lost by the unit by taking the Wounds characteristic of the model in the unit and multiplying it by the number of models lost. Then look across the row for the target number of wounds required to resurrect a model. For example if I lose three Skorepkh Destroyers (nine total wounds lost), then the probability that at least one will return (a wound pool of at least three) is 91%, the probability that at least two will return (wound pool of at least six) is 25%, and the probability that all three return (wound pool of at least nine) is effectively 0%. The end result is that Necron units with a single Wound characteristic are challenging to kill, while the individual probability of units with bigger Wound characteristics is significantly reduced. Instead of the fixed 17% chance of reanimating under 8th Edition, two wound models will only reanimate 11% of the time while three wound models will only reanimate 4% of the time. This is offset somewhat by the presence of Living Metal on most multi-wound units, but it is unquestionably a significant change which will take some getting used to. 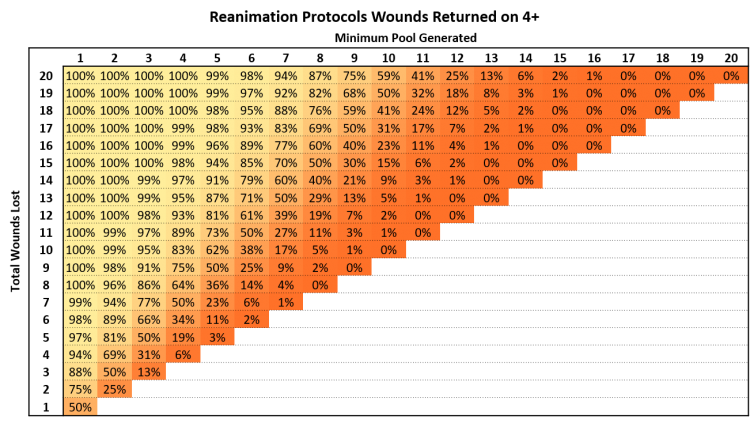 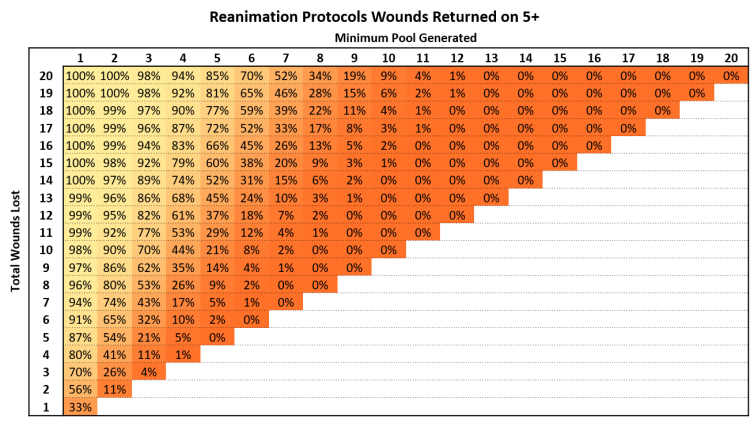 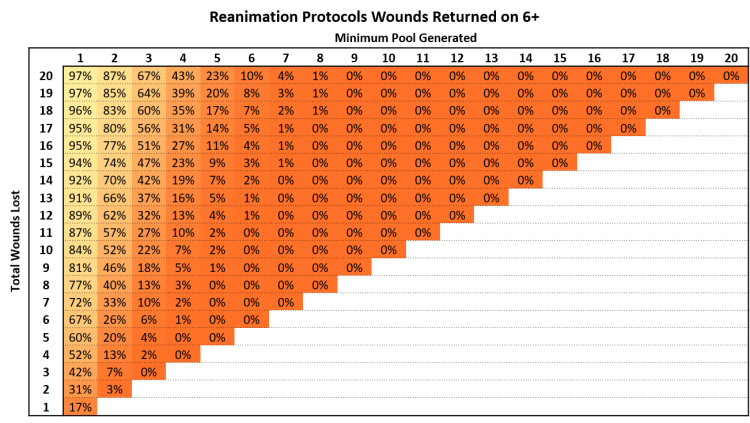 Protocols of the Undying Legion

One of the new rules for Necrons are Command Protocols; army-wide rules that provide a benefit for an entire turn. Players select the order in which the protocols activate, and during that turn the player can choose to activate one of two effects (or two if the protocol is favored by the dynastic code). One Command Protocol in particular, Protocols of the Undying Legion, has the option to re-roll a single die each time reanimation protocols activate. In the context of large-scale reanimation this has a relatively minor effect since only one die is changed. On an individual level the probability of a single die returning from 50% to 75% for a 4+, 33% to 56% for a 5+, and 17% to 30% for a 6+. For a 5+ this means that a model with two wounds will reanimate 19% of the time (instead of 11%), and a three would model will reanimate 6% of the time (instead of 4%). If your army heavily favors single wound units then it may be worth using, but in general the bonus wound from Living Metal is probably the better choice.

Their Number is Legion

Necron Warriors have a bonus rule called Their Number is Legion which allows for a universal re-roll of results of one on Reanimation Protocol rolls. This means that 17% of the time the dice will be re-rolled which converts the individual probability to 58% for a 4+, 39% for a 5+, and 19% for a 6+. Unlike Protocols of the Undying Legion, this effect is universal and works in every turn for every roll. 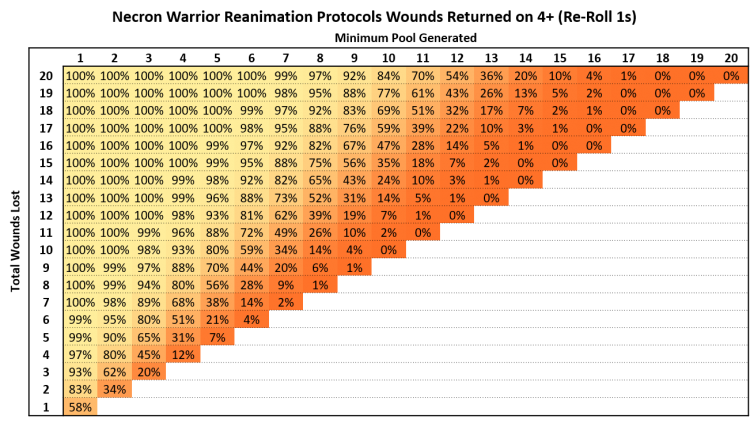 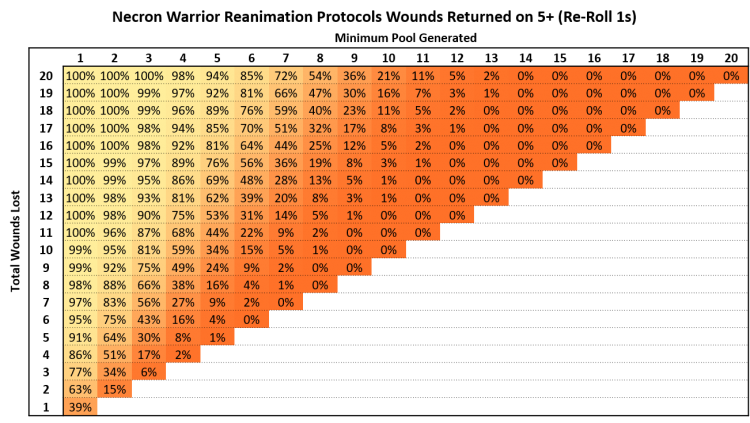 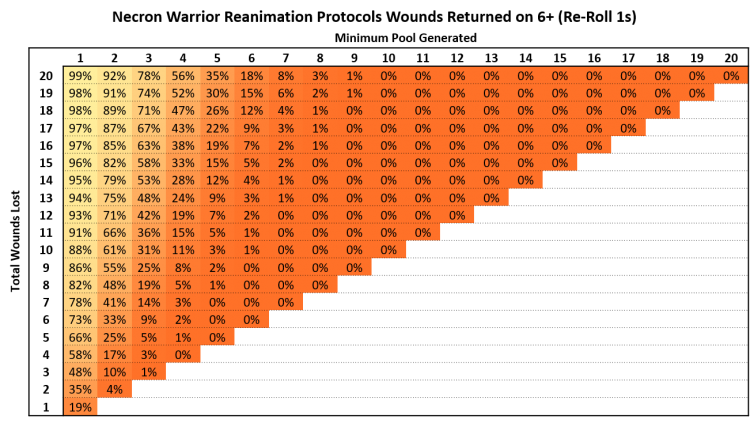 The Canoptek Reanimator is a 110 points MONSTER with 6 T5 wounds with a 3+ save. In other words it’s a large, expensive, squishy target that exists to support others. In order to justify its cost the Reanimator would need to save 110 points worth of models, as otherwise you would be better off just buying more models. The easiest way to look at this is to examine the relative improvement in reanimation rates and see how that compares to the price of a given model. Remember that the Nanoscarab Reanimation Beam only works on a single friendly unit so you’ll want to be particular about which unit you save. For example, a Necron Warrior goes from a 39% reanimation chance to a 58% chance, resulting in a 19% delta. Given that the Warrior costs 13 points that translates to 2.5 points saved per roll meaning that you would need to boost the roll for 44 Necron Warriors to get your points back. If you’re protecting Lokhust Heavy Destroyers (70 points per model) you would need to boost 18 models to get your points back. Overall it seems like you’re better off just taking more models.

The changes to Reanimation Protocols will have a significant impact on how Necrons play, especially when combined with the litany of other changes that have come though the new book.