This week’s Hammer of Math is going to cover some of the ancient calculations of the Necrons in all of their Blackstone-coveting glory. While not necessarily the most competitive force (although that could easily change when they get the Psychic Awakening treatment), they are certainly fun to play and have some amazing models. This week we’re looking at the C’Tan powers and the efficacy of Quantum Shielding.

The Necrons have always been one of the more interesting factions in Warhammer 40K. It’s hard not to love the idea of Teleporting Egyptian Terminator Robots; if it were a movie I would definitely go see it. The lore has also become a lot more interesting, with vivid personalities and an unbridled disdain for the “lesser” races. I do admit a fondness for the old lore, particularly the bit of fluff in an older rulebook about a malfunctioning Tomb World that would send the same force to the same planet at such precisely spaced intervals that the Imperium used it as a training exercise. On the tabletop the Necrons have several unique rules that we’re going to explore in this article.

First up we have the Powers of the C’tan, the Warp-defying twisting of reality that can induce a massive amount of damage to your opponent. Powers of the C’tan are essentially psychic powers that occur in the Movement phase, require no Psychic Test to produce, and are immune to all abilities that affect Psychic powers such as Shadow of the Warp or Deny the Witch. All of these powers are purely offensive and deal mortal wounds, making them a very reliable source of damage and a huge omission in my list of ways to kill The Beast. All six of these powers require a die roll to activate (which is improved if the casting unit is a Tesseract Vault), and deal mortal wounds. These powers aren’t as likely to be spammed as all six of the powers have to be allocated before a C’tan can know a power that another one does. That means you’ll need at least four C’tan (or two Tesseract Vaults) before you see the same power twice. There are two exceptions to this. Cosmic Power (1 CP) allows you to swap out a C’Tan’s power for another. This is immensely useful but can only be done once per Movement phase. The other is the Wrath of the C’tan (2 CP) Stratagem which allows a C’tan to randomly choose a power and cast it. Ideally this Stratagem would be cheaper, as the cost and lack of reliability generally make it a waste of CP, but it’s there.

Time’s Arrow is direct attack power which has a very high probability of dealing mortal wounds depending on the target. The cascading probability of a kill is 17% against a Wound characteristic of 5, 33% against 4, 50% against 3, 67% against 2, and 86% against a Wound characteristic of 1. The Tesseract Vault gets identical numbers against targets with 1 more Wound. Properly placed this can be an immensely powerful ability, particularly with the use of a Command Point Re-roll where the probabilities jumps to 31%, 56%, 75%, 89%, and 97% against Wound characteristics of 5 through 1 respectively. In other words with a re-roll banked a C’Tan Shard with this power has a greater than even chance to kill any 4 wound character within 18″ and there’s nothing your opponent can do about it.

Antimatter Meteor is directly equivalent to the Smite power in that it targets the nearest enemy unit. It’s also unquestionably better thanks to the combination of higher probability of success and high probability of reaching 1d6 mortal wounds. With proper positioning and the use of a power like Grand Illusion from the C’tan Shard of the Deceiver it’s a viable option. 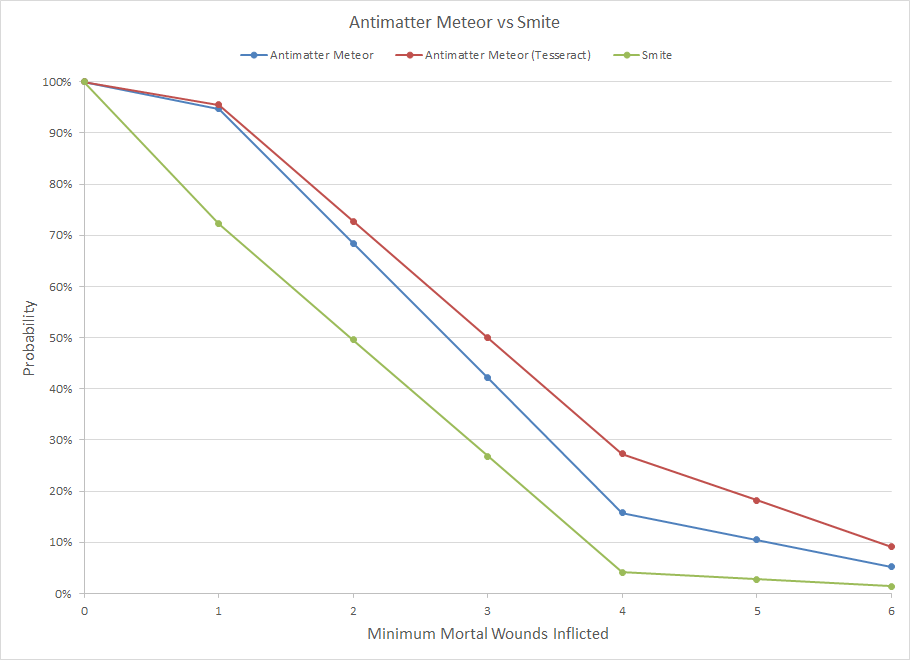 Sky of Falling Stars, Transdimensional Bolt, and Cosmic Fire are powerful abilities against multiple units. Cosmic Fire and Transdimensional Bolt both have fairly obvious use cases, requiring the player to respectively get the C’Tan within 9″ of as many units as possible or select a target that’s within 3″ of many secondary targets. Bolt Sky of Falling Stars requires you to select three targets and balance the chances of doing damage against the value of the target. As you can see in the chart below this power is extremely viable against 5-man squads such as Space Marines, dealing damage 66% of the time. 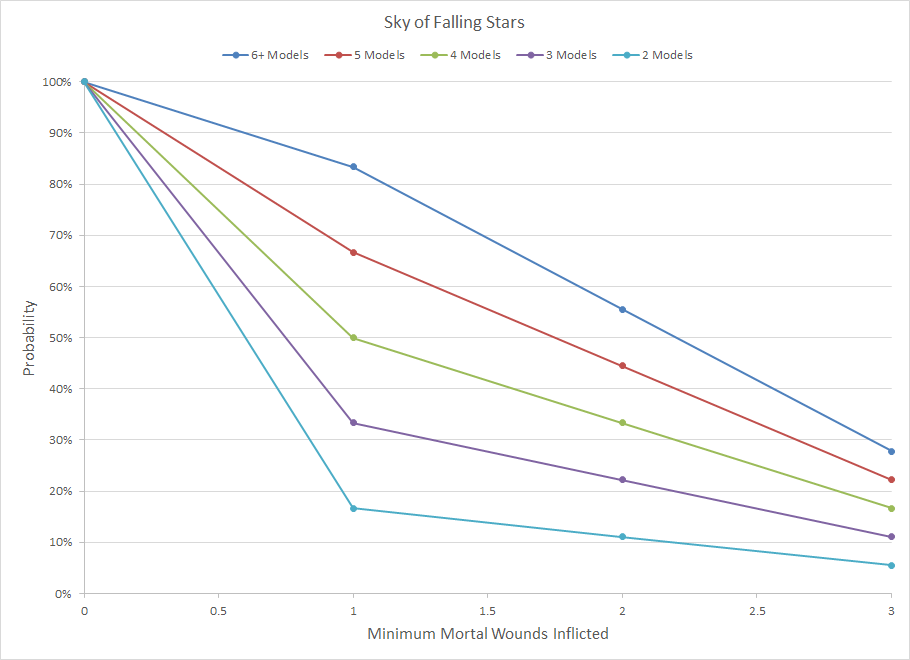 Rather than mitigate incoming damage through high Toughness characteristics, lots of wounds, or high saves, many Necron units use Quantum Shielding which prevents damage from occurring if the controlling player rolls less than the damage inflicted by the attack on a d6. This ability is further enhanced by the Quantum Deflection (1 CP) Stratagem, which allows a VEHICLE unit to subtract 1 from their rolls until the end of the phase and means the unit can potentially ignore even 1D hits. Using AnyDice I came up with the following results; if you click on the link it will take you to a program where you can tweak the values to check out any other damage levels you need to look at.

The table below shows a comparison of the mean damage before and after quantum shielding (QS) and quantum shielding with deflection (QS + QD) for various damage values. Note that the mean damage dealt peaks at between 3 and 4, meaning that weapons with a Damage characteristic of 3 are the most effective against Necron units with this ability. Against weapons that deal 2 damage quantum shielding is still as effective as a 6+ Feel No Pain roll, but this is significantly offset by the combination of low toughness and lack of an invulnerable save.

Hopefully this article provides you with a bit of insight into one of the more unique factions of 40K. With any luck Necrons will see a much needed boost in their Psychic Awakening supplement, and we’ll see a revitalization similar to what helped the Grey Knights and Tyranids. If you have any feedback, feel free to drop a note in the comments below or email us at contact@goonhammer.com. If you have any questions that you would like answered, please submit them here.