This week’s Hammer of Math takes a fresh look at some of the heavy hitters of the Space Marine army, and how they’ve changed in 9th edition.

The concept of the Smash Captain is a simple one. Take a Space Marine. Give him a brutal weapon capable of doing a large amount of damage to a single target and the ability to get to that target quickly. Charge. In 8th Edition the Smash Captain was a common sight on the battlefield, rendering the crown jewel of the enemy into piles of meat and/or scrap metal. In 9th Edition there have been several changes which make them less popular. Offensively Space Marine Captain no longer have access to re-rolls unless they get the Chapter Master upgrade, and thunder hammers are now AP -2 which makes them less appealing. Defensively the changes to how CHARACTER models are targeted mean that a solo, rampaging model can easily be targeted and eliminated if nobody is nearby to screen him. 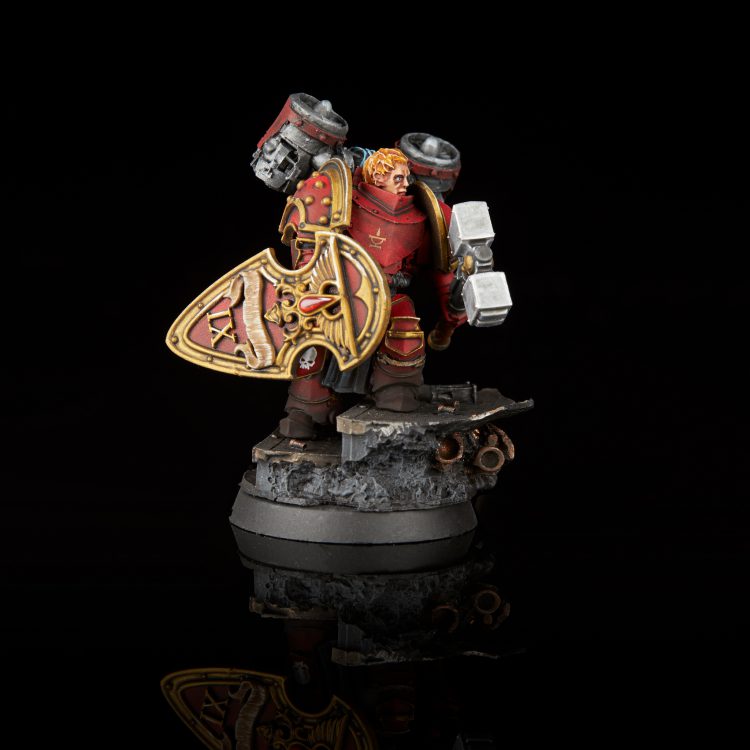 Your typical Smash Captain is armed with a thunder hammer, storm shield, and some means of getting a high Movement value like a jump pack. Nearly every build starts with The Imperium’s Sword as a Warlord trait, as the combination of +1S, +1A, and re-rolling charges are all key abilities. The hammer will often have Master-crafted Weapon applied for the damage bonus, and for the most part the Stratagems from the Core book don’t really apply. Should the player have 40 points to spare they can upgrade the attacker to a Chapter Master so that they can re-roll their own failed attacks. Outside of that there isn’t much beyond what the model can get from their respective Chapters. Assuming you use the traits above, the end result will be six S9 attacks hitting on a 3+ at AP -2 while dealing 4 points of damage. Bonuses to hit and re-rolls can be sourced from a variety of things, but in general the performance of the Smash Captain will fall somewhere between the blue and yellow lines. 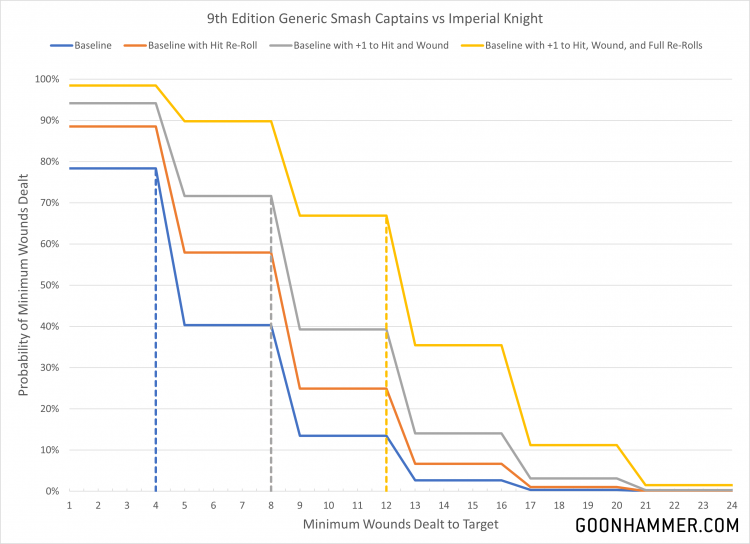 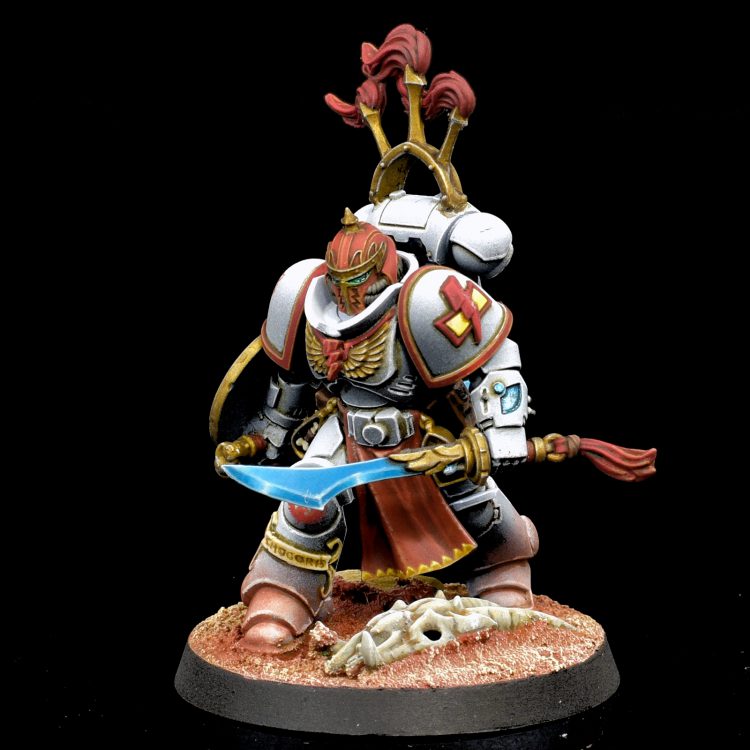 Where Smash Captains really shine is when the various bonuses from different Chapters are applied. While some Chapters don’t get much of an offensive boost (for example Black Templars don’t have a Stratagem that allows them to have a second warlord trait), most melee-oriented Chapters get at least something.

Blood Angels are extremely nasty thanks to their wound bonus and extra attack in the Assault Phase, and with Descent of Angels (1 CP) they can reliably charge and get a +1 to hit. WIth how high their rolls are Gift of Foresight is effectively the same as getting a full re-roll, or they can take Artisan of War to master-craft a thunder hammer and also take another Relic. Alternatively Hammer of Baal is interesting as it has no penalty to hit and a better AP. From the chart below we see that the D4 thunder hammer averages less damage than the Hammer of Baal, but has a higher chance of getting an extreme level of damage. Against opponents that reduce incoming damage like Blight Lord Terminators the bonus damage is likely a better choice. 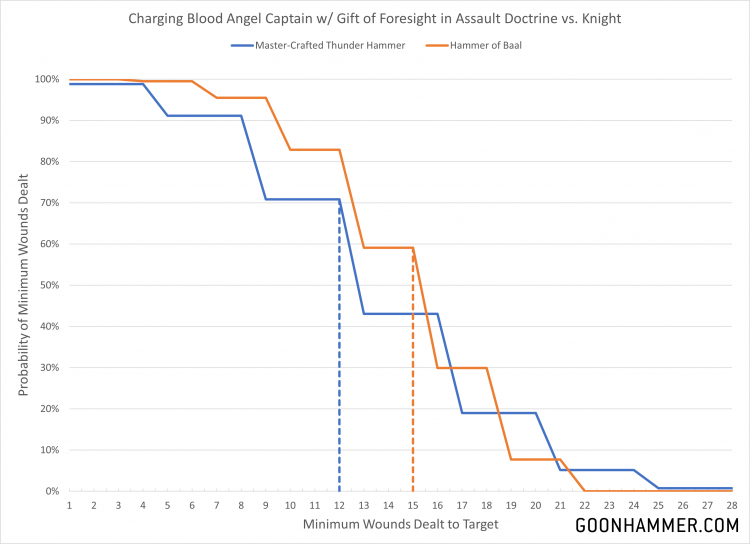 Space Wolves offset the hit penalty for thunder hammers thanks to Hunters Unleashed, and during the Assault Doctrine Savage Fury provides even more lethality with unmodified hit rolls scoring an extra hit. And since Space Wolves have the Bestial Nature (1 CP) Stratagem that can happen every turn. For Warlord traits Beastslayer is brutal against bigger targets with +1A, hit, and wound or Wolfkin can be used to get 1d3 attacks out of Shock Assault. Savage Strike is also available to get +1 to the wound roll. The sheer volume of options makes it possible to field two melee heavy hitters and still get significant bonuses, and any dedicated Space Wolf melee unit is going be hitting and likely wounding on a 2+.

White Scars have one of the most devastating doctrines in the game thanks to their ability to get +1D in the Assault Doctrine. They also have access to a lot of Stratagems that enable them to aggressively move and charge, and the Chogorian Storm Warlord trait is an extra d3 attacks that stacks with Shock Assault making it inherently better than the Space Wolf equivalent. Alternatively they could use Hunter’s Instincts if the target is a MONSTER or VEHICLE to get a +1 to hit and wound. Against those targets Hunter’s Instincts is the superior option, but if the target is a unit holding an objective like Deathwing Terminators then Chogorian Storm is the preferred solution. 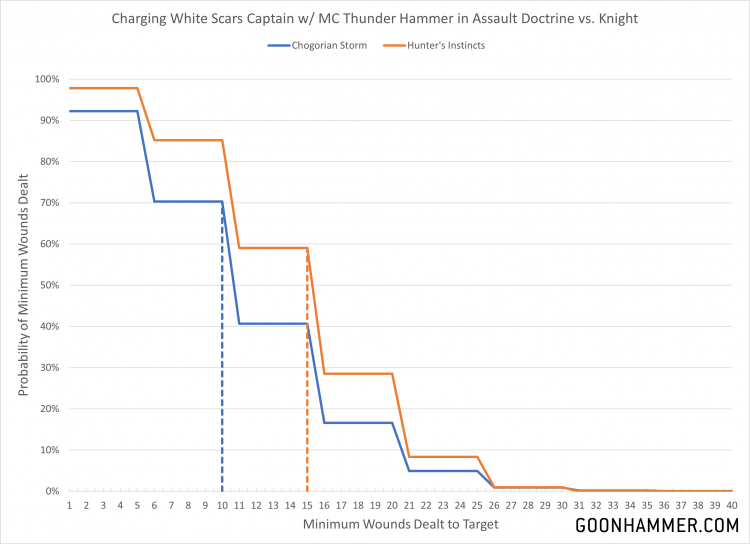 While this series has traditionally used the Imperial Knight as the primary target, 9th Edition has seen things change significantly. The presence of tough, hard to shift Brawler units like Deathwing or Death Guard Terminators has changed the nature of what constitutes a significant threat. A Smash Captain armed with a thunder hammer, storm shield, and jump pack, is 140; toss on Chapter Master and you’re hitting 180 points. That’s a significant investment, so how well does it perform against those kind of targets? For the chart below we looked at the generic captain and the three melee Chapters in the Assault Doctrine. As before the generic Captain will have The Imperium’s Sword but no other bonuses. The Blood Angel Captain will be equipped with the Hammer of Baal and Gift of Foresight, the Space Wolf Lord will have Wolfkin and apply the Savage Strike Stratagem (which is only relevant against the Blightlord units), and the White Scars Captain will use Chogorian Storm.

The disparity is pretty significant. With the exception of the Blood Angel Captain (who with the Hammer of Baal is only armed with a D3 weapon), the Deathwing Terminators are consistently harder to kill than the Blightlord Terminators. We see that the extensive bonuses offered to the Wolf Lord in the form of boosted hits and attacks makes it the most effective option at clearing out these extremely resilient models, although even the Wolf Lord is likely to kill no more than three models in a single turn of combat. Compared to the past when a single Wolf Lord could one shot a Knight 87% of the time and was a threat to every model in the game we can see exactly how much things have changed. 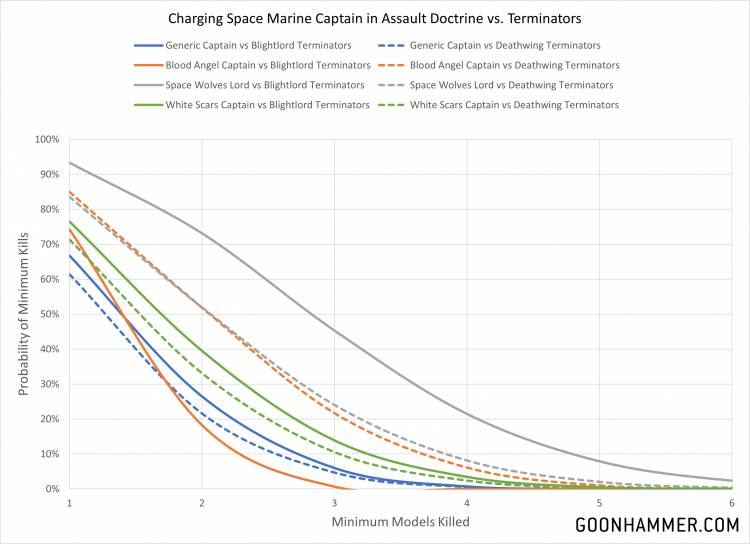 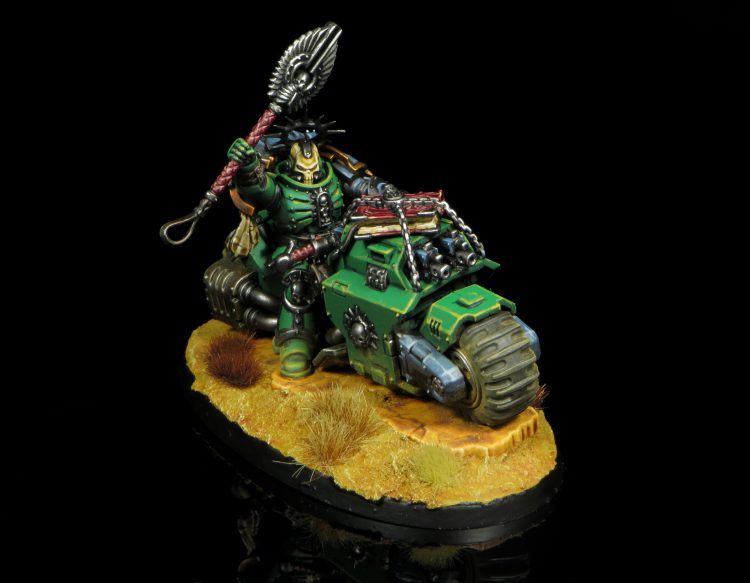 While Smash Captains are suffering a bit of a downturn, the release of the Primaris Chaplain on Bike and the Master of Sanctity option have opened up some really awesome alternatives. Whether or not a black-clad warrior priest wielding a massive power maul and riding the equivalent of a two wheeled tank is more badass than a grizzled warrior monk wielding a massive power hammer while riding atop a fusion powered jetpack is up for debate, but both work well on the battlefield. The three relevant Litanies for the offensive side of a Smash Chaplain are Mantra of Strength for +1D, +1A, and +1S, and then either Exhortation of Rage for +1 to wound or Litany of Hate to re-roll the 1s to hit. In order to ensure the Litanies go off the preferred Warlord trait is Wise Orator instead of Imperium’s Sword, and the Benediction of Fury Relic is used since it’s +2S, AP -2, and base 3 damage. Black Templars also have the option to also use Psalm of Remorseless Persecution to re-roll wound rolls of 1 and Fires of Devotion to get an extra attack when they charge.

For our baseline we can use a Primaris Chaplain on Bike with Master of Sanctity and the Benediction of Fury and then compare the difference between Exhortation of Rage and Litany of Hate for various targets. The effect of Mantra of Strength is so great (improving the driving values of both attacks and damage) that we know it’s going to be necessary. On the charge this translates to 6 S7, AP -2 D4 attacks that deals a mortal wound on a 6 to wound and has an additional bonus based on the second Litany. 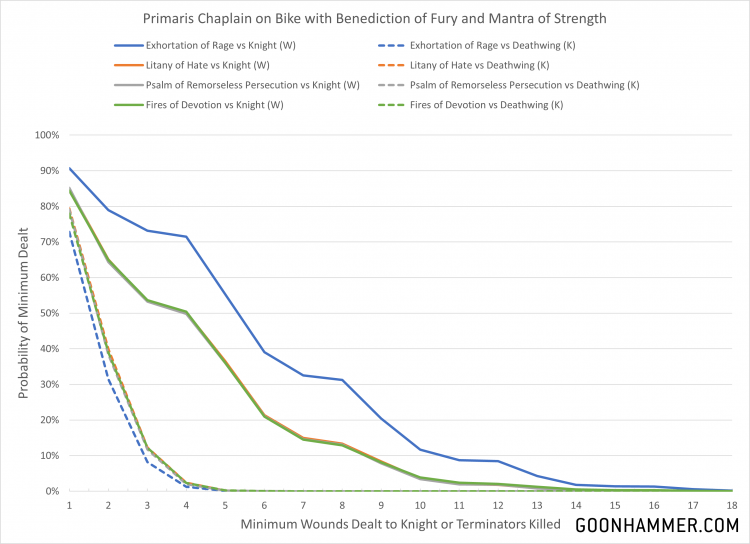 At first this seems like an error, but it makes sense when you consider what each Litany is doing. The model starts with six attacks. Litany of Hate allows for missed hits to be re-rolled, which in the case of a 2+ is a result of a 1. Psalm of Remorseless Persecution allows for wound rolls of 1 to be re-rolled. Since the Primaris Chaplain on Bike is dealing six attacks that means, on average, you’re going to get one re-roll. That is effectively an extra attack, making it equivalent to the results from Fires of Devotion. The bonus from Exhortation of Rage doesn’t apply to Deathwing Knights, so it kills fewer models.

The big advantage of Biker Chaplains is that they move fast and that Litanies hit at the start of the round. This means you could potentially use one Chaplain to boost another one, and then send that particular Champion off to wreak havoc and crush enemies. The absolute best possible combination for this are White Scars, who have the ability to Advance and charge and deal extra damage in the Assault Doctrine. With that in mind just how absurdly powerful could a Biker Chaplain get?

We’ll start with a baseline Chaplain that uses Chogorian Storm along with Wise Orator to guarantee that the Litanies of Mantra of Strength and Exhortation of Rage are active. In the Assault Doctrine this translates to 6+1d3 S7, AP -3, D5 attacks with mortal wounds on wound rolls of 6 and a +1 to wound. For our maximum potential we’ll replace the Warlord trait with Imperium’s Sword, and add a second Chaplain who will coast around with Exhortation of Rage to make sure everything happens. That second Chaplain could actually be the Master of Sanctity and have Wise Orator to fire the Exhortation and Litany of Hate while the ‘missile’ Chaplain is the one with the double traits and Mantra of Strength. The end result is 7+1d3 S8, AP -3, D5 attacks with a +1 to wound, mortal wounds on wound rolls of 6, and re-rolls to hit. To see if it’s worth it I also added a line for Gene-Wrought Might (2 CP). 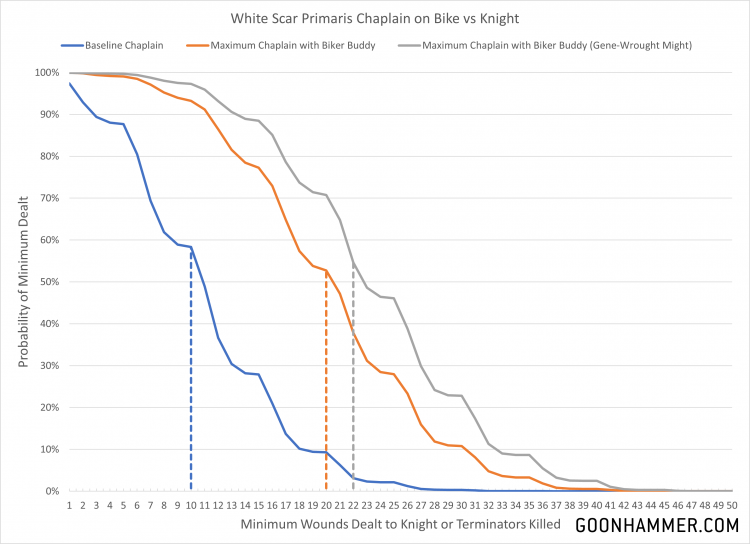 Now we’re talking. Properly boosted the Biker Chaplain can pose a reasonable threat to even an Imperial Knight, although to do so would still require the first Chaplain to stay within 6″ to ensure the re-rolls. Every strike that goes through deals 5 points of damage, making it roughly equivalent to a melta hit at half range. Using the Stratagem provided enough of boost to have a 45% chance of killing the Knight, which is fairly impressive given how much Games Workshop has focused on reducing high damage threats like this.

There are plenty of other heavy hitters that we can focus on outside of the Space Marines, and I look forward to checking them out in between book releases and other games. Thanks for reading! If you have any feedback, feel free to drop a note in the comments below or email us at contact@goonhammer.com. If you have any combinations you think I should look at, or questions that you would like answered in a future article like this one, please submit them here.