The recent changes in the Deathwatch Codex Supplement included some significant modifications to Special Issue Ammunition along with a major curtailing of which units can actually equip it. Although we briefly covered the topic a few weeks ago, several readers asked me to put in a more in-depth analysis similar to the one done for the previous codex.

The new Deathwatch Codex Supplement changed how Special Issue Ammunition worked in two very fundamental ways. First, the ability is now limited to specific weapons instead of Datasheets. The only weapons that have it by default are Deathwatch bolt pistols (which is NOT on the Deathwatch equipment list), Deathwatch boltguns (and their associated twin and combi-weapon versions), the stalker-pattern boltgun, and the vigil spear possessed by the Watch Master. Other units can get it via the Artificer Bolt Cache or by spending 2CP on the Special-Issue Loadout Stratagem, but otherwise that’s it. Second, the effects have changed significantly so that every option is viable depending on the circumstances.

Previously the default option was to use Hellfire unless the target had a 2+ save; now things are a bit more complicated. Cover now means either a -1 to hit or a +1 save, hellfire rounds are no longer the obvious default with their 2+ save, and vengeance rounds could be devastating against multi-wound threats. With that in mind I hope to answer two questions:

Although not perfect, we can use an expected value approach as an easy way to estimate the output between the various weapon options. As with the previous article on the subject I looked at the various weapon options for each possible configuration scenario, the difference now is that with only two profiles to check out for most units there’s a lot less to examine. Note that the vigil spear can also be examined by looking at the chart for the stalker-pattern boltgun and increasing the effective save of the target by 1 (since it’s AP -1 instead of AP -2). Similarly in the Tactical Doctrine you can simply shift the save of the target down by 1 to reflect the additional AP. 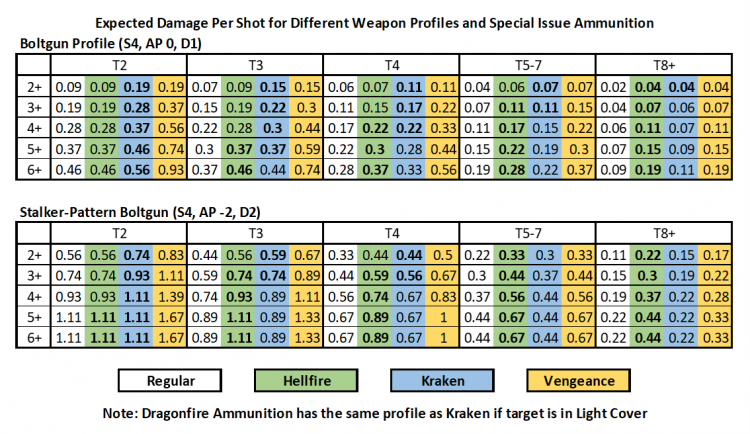 We immediately see that the additional point of damage from the vengeance ammunition makes it the superior choice outside of T8+ targets getting shot at by stalker-pattern boltguns. The power of modifying the driving attributes of damage and the number of attacks is well understood and continues to be true in this case. The caveat here is that there are scenarios where the additional point of damage is useless; specifically when the Wounds characteristic of the target is equal to or less than the damage dealt by the baseline weapon. In those situations the preferred choice of ammunition depends on the toughness and armor save of the target. In general there is a balance point for a given combination of Toughness characteristic and Save where kraken and hellfire are equally effective; for saves below that point kraken is preferable while above that point hellfire is preferable. Note that this is damage per shot, so in scenarios where the additional range of kraken gets the boltgun into rapid fire range then that would be the ideal choice.

Dragonfire ammunition is an interesting selection due to how limited the effect of ignoring cover currently is. Currently “the benefit of the cover” means only that Light Cover or Dense Cover is denied. Kraken ammunition effectively counters Light Cover, so that leaves Dense Cover as the only scenario in which dragonfire would be considered. As with hellfire and kraken, the preferred time to use dragonfire depends on the Toughness characteristic of the target (and whether or not vengeance rounds would do anything). At lower Toughness characteristics the bonus of dragonfire makes it the superior choice to the bonus for hellfire, while at higher characteristics the opposite is true.

In 8th Edition the most effective choice for Deathwatch players was to take their Deathwatch Veterans and give them storm bolters and storm shields. This provided a brutal combination of lethality and defensive capability thanks to Rapid Fire 2 gun shooting Hellfire ammunition and a 3++. While storm shields are still great (aside from everyone else, who doesn’t like 2W T4 models with a 2+/4++ profile?), should Deathwatch players whip out the green stuff and unceremoniously plug one of the barrels? In terms of output the storm bolter gets twice as many shots as the boltgun for only 2 points more. In terms of expected damage this means the output is identical to the boltgun if it were to fire vengeance rounds, only with the bonus of being equally applicable regardless of the Wounds characteristic of the target. The chart below compares the expected kills per attack for each weapon assuming the best possible ammunition. So for example vengeance ammunition is only used where relevant (such as equipping stalker-pattern boltguns with vengeance rounds when firing against 3W targets). 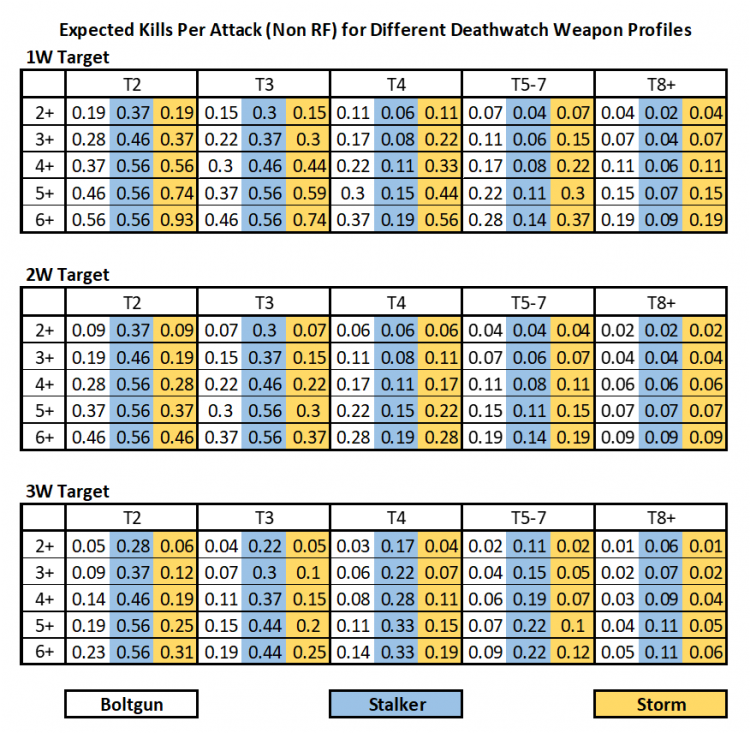 We quickly see that the storm bolter more than holds its own against a variety of targets. While it doesn’t have access to the 31 flavors of special issue ammunition, what the storm bolter does have going for it is a massive volume of fire. Being able to spew out twice as many bullets as the regular boltgun makes the fancy modifications to hit, wound, or armor saves largely irrelevant. Where things do get interesting is with the stalker-pattern boltgun and 3W targets like the ubiquitous gravis unit. Here the ability to take out a unit with a single shot is extremely helpful, making it twice as effective as the boltgun. At the 3W level we also see that storm bolter retains its efficiency when compared to the profile of the boltgun armed with vengeance rounds, as no damage is wasted.

The changes to Special Issue Ammunition are significant and require a fair amount of careful thought.