This week’s Hammer of Math visits the wonderful, friendly, and not at all terrifying realm of Commorragh to take a quick peek at the new Drukhari Codex before our eyeballs are replaced with spiders.

The new Drukhari Codex looks really fun, bringing together a lot of exciting game design and a flavor that’s unique to the spikey version of the Aeldari. Players have opportunities to enjoy an immense amount of flexibility and flavor in what we hope is a trend for how Games Workshop treats xenos races in the future. This week we’ll look at a sampling from each of the three entities that make up the inhabitants of Commorragh. Whether your interest is piqued by the diversions of the Kabalites, the spectacles of the Wych Cults, or the proclivities of the Haemonculi there should be something for everyone.

The Drukhari are known for their poisons, and in game terms the Poisoned Weapon effect translates to attacks which have a constant target for Wound rolls against anything that isn’t a VEHICLE or TITANIC. What this means is that units which historically have relied on high Toughness values like Tyranid monsters or Gravis units will suddenly find themselves as easy to wound as grots. The Kabals take this a step further, with a few obsessions allowing splinter weapons to be even nastier. For this section we’ll take a look at three options: 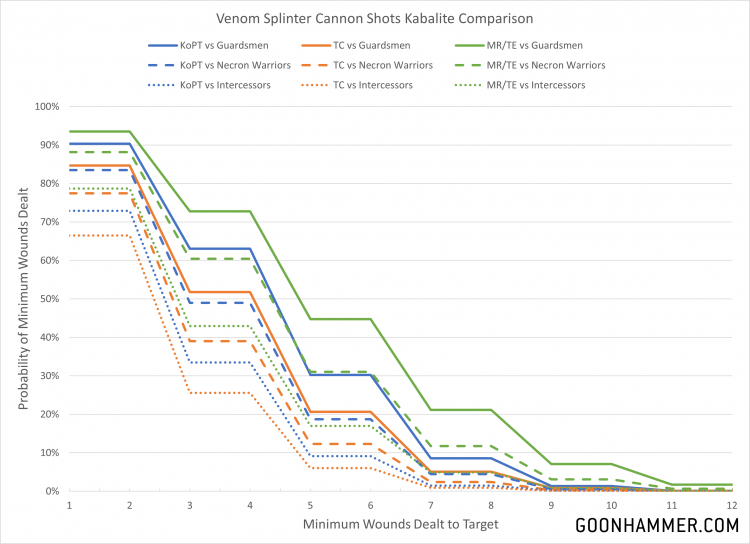 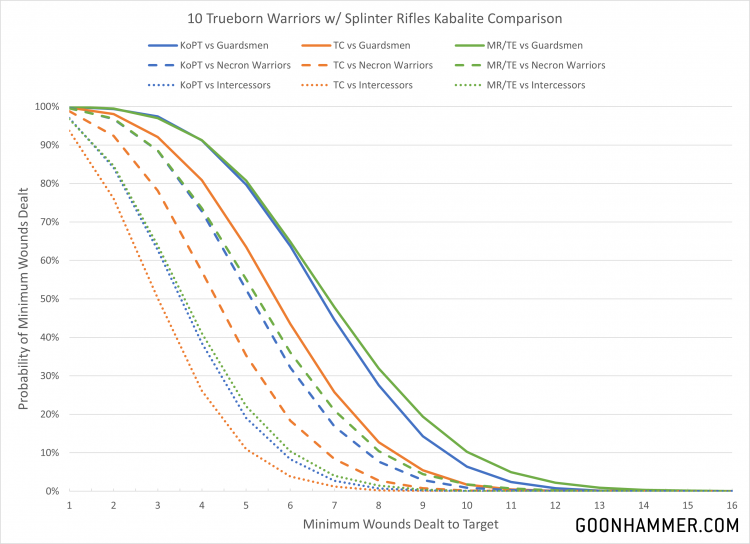 The results are pretty conclusive; the combination of Merciless Razorkin and Torturous Efficiency is superior. Getting more attacks wins out, especially when combined with the universally applicable bonus to penetration.

New releases always bring about questions about optimal weapon choices, and in this case it’s all about the Talos. These self-motivated torture machines have the option of being armed with a pair of Drukhari haywire blasters or heat lances. The heat lances are basically melta weapons that always deal 1D6+2 points of damage but only get one shot. The haywire blasters get D3 shots at S3, AP -3, and 1D3 damage but against VEHICLE targets they always wound on a 4+ and on a wound roll of 6 they also inflict 1D3 mortal wounds. 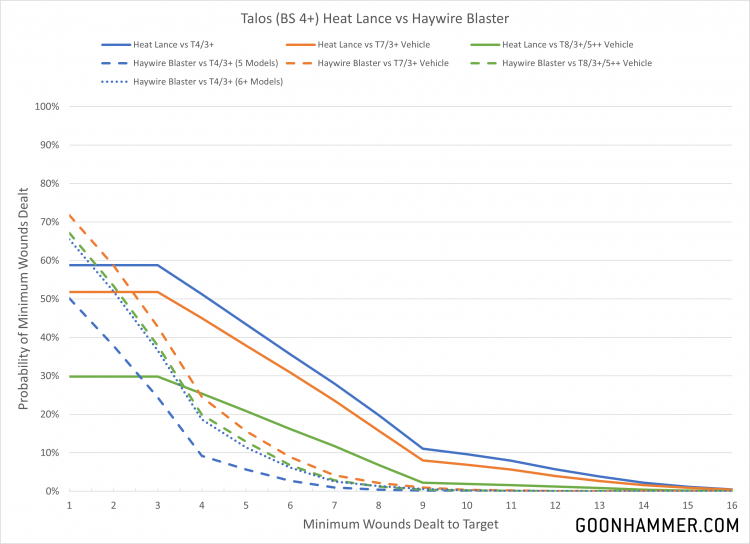 In general it seems like relying on the poor BS of a Talos isn’t a great idea, but if you’re given the choice then the heat lance seems to be the superior choice. The heat lance also synergizes well with the attacks of the talos gauntlet, especially in later rounds when the Hit roll penalties are offset by Power From Pain.

Players interested in applying a ranged approach may want to also consider the Dark Technomancers obsession. Ranged weapon attacks can be enhanced with +1 to wound and +1 to the Damage characteristic, but Hit rolls cannot be re-rolled and if there are any unmodified Hit rolls of 1 then the attacker takes either 1 mortal wound or 1D3 mortal wounds if it is a VEHICLE or MONSTER. The probability behind this is fairly simple; you have a 1/6 chance per shot of hurting yourself. To calculate what the probability is of getting hurt for multiple shots you can use the following formula:

The formula above is the probability of not hurting yourself (5/6) multiplied a number of times you shoot (n). That gives you the probability that no shot will do damage. Subtracting that from 1 gives you the inverse, which is the probability that at least one shot will hurt you. So a boosted heat lance will hurt you 17% of the time, while a boosted haywire blaster getting three shots while shooting at a squad of 6 or more will hurt you 42% of the time. Shooting two weapons (meaning two separate attacks) results in a 30% chance of self harm with the heat lances and an 82% chance with the maxed out haywire blasters. Ouch.

The last thing we’ll cover is a unique ability provided to the Wych Cults; the Precision Blows Warlord Trait makes any hit roll of 6 automatically deal mortal wounds equal to the Damage characteristic of the weapon. This is particularly unpleasant when combined with the Tryptych Whip (say that ten times fast), which gives the bearer additional attacks and also does two points of damage. With the correct combat drug that’s 10 attacks with a WS of 2+ that wound any non-VEHICLE or TITANIC target on a 2+ with an AP of -3 and a Damage characteristic of 2… and any unmodified Hit rolls of 6 just deal 2 mortal wounds. 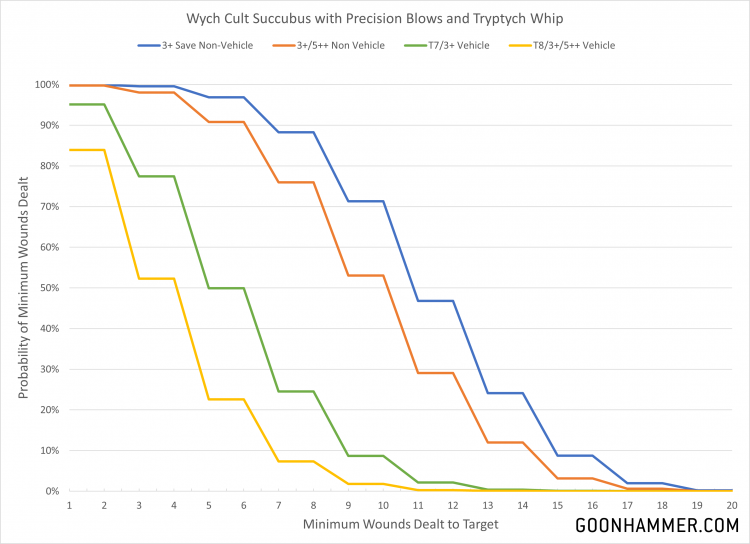 The mortal wounds make it a nasty threat against even VEHICLE models, although it’s definitely not at the level of a Space Marine Heavy Hitter. Tyranid players should be absolutely terrified of the amount of damage that this thing can put out against anything organic; even an invulnerable save won’t necessarily save you.

Fans of spiky sadomasochistic space elves should be happy with this new book. We learned that the combination of Merciless Razorkin and Torturous Efficiency are particularly great for armies that feature a lot of splinter weapons, that the heat lance is probably the better choice for a Talos, that players interested in Dark Technomancers should expect to hurt themselves quite a bit, and that Precision Blows is a particularly fun Warlord Trait. This just scratches the surface of what players can do with the new book, and I’m excited to see what kind of horrors will be unleashed upon the battlefield.

Thanks for reading! If you have any feedback, feel free to drop a note in the comments below or email us at contact@goonhammer.com. If you have any combinations you think I should look at, or questions that you would like answered in a future article like this one, please submit them here.