This week’s Hammer of Math takes a look at the newly released Codex: T’au Empire and the impact of the heavy hitters.

I like big guns. I cannot lie. Other players may deny the appeal of a giant anime-scale murder cannon putting superfluous holes through various targets, but I fully embrace the joy of large guns. Unfortunately for quite some time the tabletop impact of these huge weapons wasn’t terribly impressive. Variable damage, invulnerable saves, and stacked damage reduction made these weapons far less appealing than large volume of 2-3 damage guns. Games Workshop started to shift the balance back through the judicious use of damage reduction abilities, but older armies still suffered from high variance damage. As new books drop we see this change, and there is no better example of this than the new release of Codex: T’au Empire.

The Hammerhead’s railgun is a perfect example of how things have changed for the T’au. Previously this weapon was S10, AP -4, and dealt D6 damage with a chance to inflict D3 mortal wounds on a wound roll of 6+. With enough markerlights on the target you had a roughly 52% chance of wounding high value targets, but assuming the target didn’t save you were still relying on a D6 damage profile to do anything of value. On a single shot weapon this is simply not viable. Fortunately GW seem to have addressed this, and the new profile is significantly nastier.

With the new markerlight rules you will generally be hitting on a 3+, and thanks to the new Targeting Array ability a failed hit roll can be re-rolled. Assuming you use the T’au Sept then the Coordinated Fire Arcs sept tenet means the wound roll can also be re-rolled. In a dramatic shift the weapon now ignores nearly any save possible, leaving you with one of the flattest and most reliable damage curves in Warhammer 40k. 145 points will buy you a platform which potentially has a 79% chance to deal 10 wounds to anything, and against T7 or lower that probability increases to 86%. Longstrike sits at a flat 95% courtest of the +1 to wound from the Gunship Ace ability assuming the target is a MONSTER or VEHICLE, and can provide a neighboring CORE or HAMMERHEAD unit with a Markerlight token courtesy of his XV02 Pilot Battlesuit. Not bad for 160 points.

On top of this, Longstrike gives you a Hammerhead option that starts at BS 3+, allowing you to get down to 2+ to hit with markerlight support, further improving your odds.

I’ll admit; I’ve never actually seen a Sky Ray in real life. A key reason for this is because the Sky Ray was absolute garbage, carrying 6 missiles with a S8, AP -2, D6 damage profile that could only be fired once and required two markerlights to have a chance of hitting with a BS of 3+. This is now completely changed. Instead of individual missiles, the Sky Ray has a seeker missile rack which fires D3+1 shots at S9, AP -3, and 2D3 damage at a 4+ BS. Add a markerlight and the Frequency Lock Stratagem for 1CP and the attack gets +1 to hit and to wound, and no longer requires line of sight. Against Aerial targets the attack gets a +2 bonus and the damage roll can be re-rolled, and thanks to the Targeting Array one hit roll can be re-rolled. Note that per the core rules the best that a Sky Ray can manage is a 3+ BS, but with all the bonuses it’s very likely it will achieve that. Bor’Kan sept players can also use Experimental Weaponry to ignore invulnerable saves.

The results are pretty impressive given that the unit costs 135 points. The bonuses to hit and re-roll damage make it particularly nasty against AIRCRAFT targets, while the use of Frequency Lock makes it able to wound most threats on a 2+. The effectiveness is somewhat mitigated by the variability of the Heavy 1 + 1d3 attack profile, but it’s certainly a platform worth considering.

The Riptide is an extremely powerful unit that enjoys a nasty combination of mobility, toughness, and lethality. This is further enhanced courtesy of its Nova Reactor ability, which when activated can either enable the model to ignore wounds on a 5+, move 2D6″ in the Charge phase as a Normal Move, or increase the number of shots of its main weapon by 33%. This bonus comes at a price; every time the nova reactor is activated the player must roll equal to or less than the number of remaining wounds or the reactor is burned out and cannot be used again. This can be mitigated by the Branched Nova Charge Stratagem for 2CP, but that can only be used once per unit. So how likely is it that you will burn out? 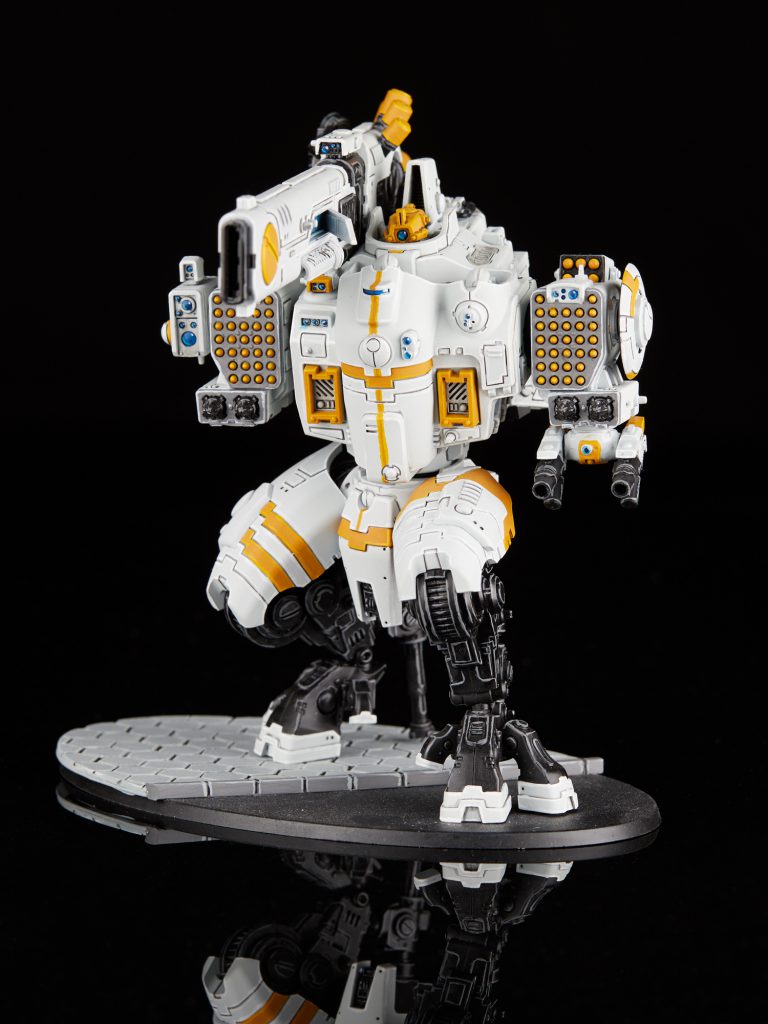 The final big gun in this article is the Stormsurge, a 330 point Lord of War featuring a HILARIOUS array of high power weaponry. The most notable among these is the Focused Pulse Blastcannon, which has the option of firing a pair of S16, AP -4, D12 shots which have a solid possibility of nuking basically anything short of a Titan within 24″. This weapon can also be used as a dispersed shot which fires 6 shots at S12, AP -2, and D4. Another option would be the pulse driver cannon, which fires 3D3 shots at S10, AP -4, and D3 with the blast trait.

Yes, the chart below does show that a Bor’Kan Stormsurge firing with Experimental Weaponry active has a better than even chance of one-shotting a Knight. Depending on the wound value of your target both the dispersed shot and the pulsed driver cannon have a role to play against heavy infantry, with the pulse driver cannon having a significant advantage against bigger units.

The new Codex: T’au Empire contains a lot of changes that seem to be exciting and fun for player and opponent. Things like the Hammerhead Railgun and Sky Ray Gunship have made significant improvements, the Stormsurge is terrifying, and we haven’t even touched the flexibility of the Battlesuits (which will certainly happen in an upcoming article). This book reflects some of the best changes that I’ve seen in Warhammer 40k, and I look forward to seeing it on the battlefield.