Hammer of Math: T’au Commanders, Combi-Weapons, and Morty vs Deathwing

This week’s Hammer of Math will cover several reader submitted questions submitted via our request form. Specifically we’ll look at the difference between T’au Commander options, when (if ever) it’s worth firing both barrels of combi-weapons, and which of the big nasty threats from Dark Angels and Death Guard is harder to kill.

Our first question comes from our own Judge Ruleshammer Vrekais, who asks about which option is more survivable for T’au Commanders.

For example if you have a 6+ save (or any ability that denies wounds such as Feel No Pain) then your equivalent wounds is 6/5 or 120%. It’s better than the flat probability of the save (1/6 or 17%) because the save is also applied to every additional attack beyond the first. To look at the level of improvement offered by increasing a save we can look at the change in the number of effective wounds offered by going from one save to another. For example going from a 3+ (300% equivalent wounds) to a 2+ (600% equivalent wounds) is a 300% improvement. So from a purely mathematical standpoint so long as you are in a position to get a save (meaning any weapon with a AP of -4 or less) the improvement from the +1 save is equal to or better than getting an additional wound. Of course 40k is significantly more complicated than this and there are other things to consider such as the damage dealt by the incoming attack. In this case we need to look at not only the number of equivalent wounds, but all the number of attacks required to kill a target. Going from five to six wounds does not help against attacks that deal two or three points of damage, but it can help against weapons that deal 1, 1d6 or 1d3 points of damage. Charting those out below, we see that the bonus save option is the superior choice for every scenario outside of meltaguns beyond half range. 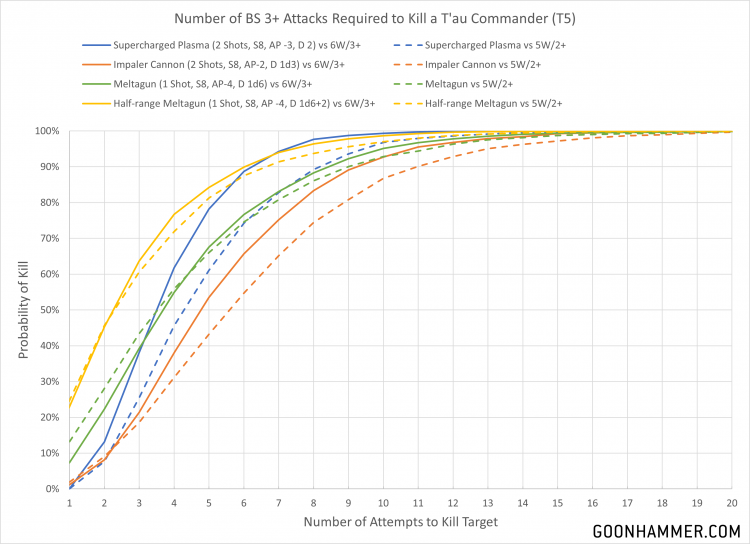 Next up we have a question from readers Electric Tuba and StayGoldenBronyBoy, who both asked about combi-weapons. BronyBoy asked first so that’s the one I’ll post:

I wonder if there’s a discussion anywhere of when to shoot both combi-plasma and bolt profiles? is there any reason to shoot the bolter ever? Against T3 1W horde units likely, but T4 1W? is it cut and dry? Does combi-plasma vs combi-melta affect this math?

Combi-weapons have a dual profile which includes a bolter (Rapid Fire 1, S4, AP 0, D1) and either a meltagun (Assault 1, S4, AP -4, D 1d6), plasma gun (Rapid Fire 1, S7, AP -3, D1 or Rapid Fire 1, S8, AP -3, D2), or flamer (Assault 1d6, S4, AP 0, D1). If the bearer chooses to fire both weapons then both attacks are made at a -1 to hit. If the bearer is armed with a combi-flamer then one would always fire both profiles as the flamer weapon will automatically hit so there’s no downside. Similarly if the attack is already at a-1 to hit due to an ability or terrain feature then again there is no downside to firing both weapons. In the absence of another modifier then the question is whether or not the extra one or two attacks from the bolter will offset the 25% reduction in performance that comes from the -1 hit penalty. To see if there’s even a floor, let’s look at the easiest thing to kill in the game – the humble gretchin. A rapid firing plasma gun will average 1.11 wounds against a grot, so 25% of that is 0.28 wounds. A rapid firing bolter is 0.69 wounds, so there is at least one situation in which it’s beneficial to fire both weapons of a profile. Since the meltagun only has one shot it’s even worse against the grot.

Of course most things aren’t grots, so how do we determine the threshold at which firing the combi-bolter is counterproductive? We can go back to the expected kills formula:

Note that the hits to kill is an essential deviation from the traditional damage formula; it reflects the fact that extra wounds are effectively lost. A D2 weapon hitting a 1 wound target is no different than a D1 weapon. Our break even point is when the expected kills of the combi-bolter is greater than 25% of the expected wounds of the original plasma gun or melta.

Comparing the break even points for various combinations we get the chart below. For plasma weapons the targets are generally either low toughness or low armour save, while the additional shot of the boltgun compared to the meltagun makes the bolter more appealing for more threats. In general when attacking the kind of targets that meltaguns are intended to kill (multiple wound, high toughness, high armor save) adding the boltgun is sub-optimal. Incidentally there is no target in which, if the option is available, you would not want to fire the meltagun. 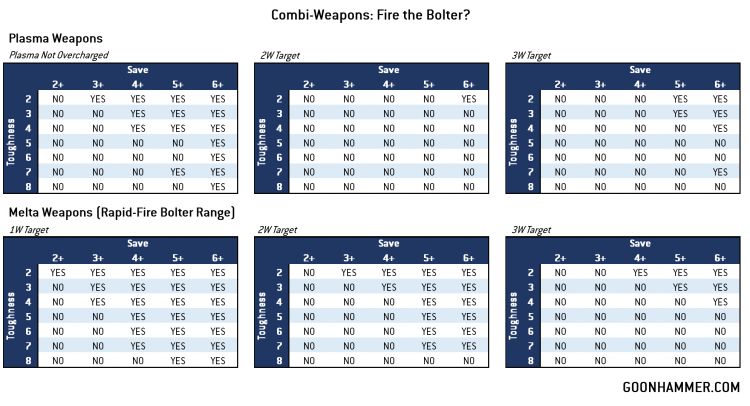 Our final question comes from a reader by the name of “Unkillable Morty vs 10 white dudes” which is a remarkably apt name given the question.

On a point for point basis, what is more durable between Morty and 490 points of DW termies?

The last two books dropped by Games Workshop have revealed some immensely nasty options in the form of a vastly boosted Mortarion and some very unpleasant Deathwing. At 490 points Mortarion’s profile is 18 wounds at T8, 3+/4++/5+++, and with the new Disgustingly Resilient rule all incoming attacks are now at -1 damage (minimum 1 damage). As the favored harbinger of Father Nurgle he is almost certainly going to be protected by a Miasma of Pestilence which induces a -1 to hit. On the other, unquestionably loyal side are the Deathwing. These elite members of the First Legion received a massive boost in their new codex. With a 3 wounds at a T4 and a 2+/4++ profile when given storm shields, they ignore all wound rolls of 3 or less thanks to their Inner Circle ability. When supported by a Apothecary they get a 6+++ thanks to the Narthecium aura, and should an Ancient be nearby their Pennant of Remembrance can be used to reduce incoming damage by 1. With a thunder hammer and storm shield they are 43 points apiece, so a strict comparison would be 11.4 models. Rather than split a squad and cut a Terminator in half we’ll look at a squad of 10 Terminators and assume an Apothecary is nearby.

For purposes of determining durability we’ll examine the amount of damage dealt to each target in a single turn. For Mortarion we’ll look at the number of wounds dealt, while for the Deathwing we’ll look at the number of models killed. Our threats will be a House Lucaris Knight Rampager, roughly 500 points worth of Eradicators, roughly 500 points worth of Plasma Inceptors, and on the top end a couple of Titans because I’m convinced that Forge World screwed up. 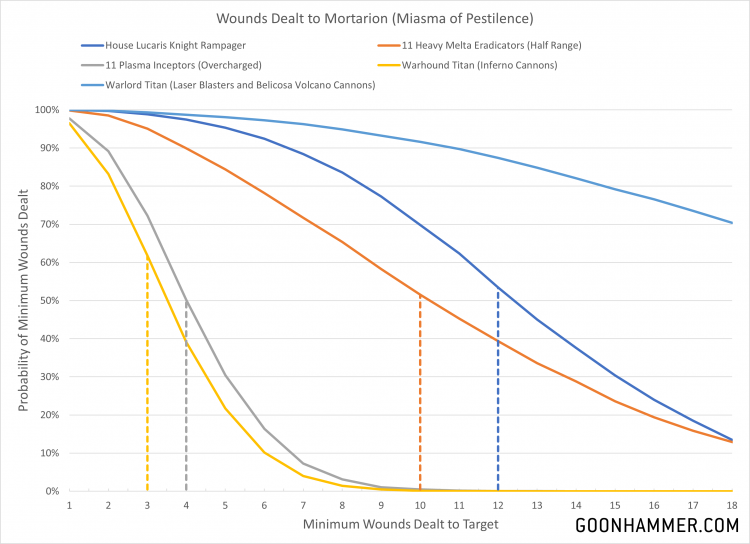 First up we see that, in a single turn, it’s extremely hard to kill Mortarion outside of using a full attack from a 5500 point ambulatory manifestation of the Omnissiah’s unbridled wrath… and even then 30% of the time the Primarch survives. Of the more likely threats only the House Lucaris Knight Rampager and the Eradicators armed with heavy meltas have any chance of killing him in a single turn. The combination of damage reduction, ignoring wounds, high toughness, and impressive invulnerable save synergize into a nightmare of a threat. Things can be slightly improved through the use of re-roll auras and other effects (assuming Mortarion hasn’t been able to turn them off!), but the bottom line is that Mortarion is everything he should be.

Next up is the Deathwing. 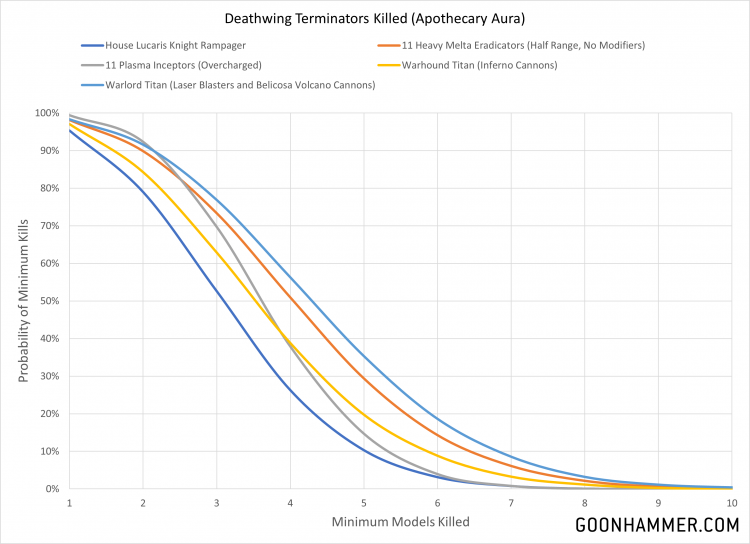 This is where we start to see how the fundamental rules of 40k break when exposed to extremes. In this case nothing, not even the Warlord Titan, is capable of doing enough damage in a single turn to kill 10 Terminators. The core reason for this is the fact that 50% of all attacks will fail thanks to Inner Circle ignoring any wound roll result of 3 or less, and that excess damage is lost when an attack kills a model. On the tabletop this means that Deathwing will be a premiere threat and extremely difficult to dislodge from an objective they contest. They are, without a doubt, more resilient than even Mortarion.

The results also show the absurdity of incorporating Titans into a game of 40k. As awesome as they look on the battlefield, there’s no logic behind a Warlord costing 5500 points. Players interested in that scale are better off playing the extremely fun (and sadly no longer supported) Apocalypse game. It does a much better job of encompassing what it’s like to have a massive battle where Lords of War are merely pawns instead of centerpieces. Better yet everyone should play Adeptus Titanicus, which is a lot of fun and shows no signs of slowing down.

Thanks to the readers for their questions. This article was a lot of fun to write, and I look forward to doing more of these. Hopefully knowing that the XV8 with Iridium is the best option, that combi-bolters should only be fired against chaff targets, and that Deathwing Terminators are nearly impossible to kill is helpful. As always, if you have any feedback feel free to drop a note in the comments below or email us at contact@goonhammer.com. If you have any questions that you would like answered in a future article like this one, please submit them here.