Hammer of Math: The Book of Fire

This week’s Hammer of Math takes a look at some of the new matched play rules from War Zone Charadon: The Book of Fire for the Imperium. Next week we’ll look at Chaos.

Games Workshop dropped another campaign book to continue the saga of the Charadon Sector, and in addition to extensive narrative rules and an accompanying set of missions the book also contains matched play rules for the Sisters of Battle, Adeptus Mechanicus, and a ton of rules for Be’lakor and his disciples which we’ll look at next week. The Sisters of Battle gain a codex supplement for Order of Our Martyred Lady, which is a sort of mini-codex for that particular faction. Adeptus Mechanicus gain the Skitarri Veteran Cohort, which is an Army of Renown that provides benefits if your army contains only SKITARII units (along with a few Tech Priest HQ options).

Order of Our Martyred Lady: Blade of Sacrifice

For the most part the rules for the supplement are fairly straightforward, but there is one Relic with an interesting rule: the Blade of Sacrifice. This power sword (+1S, -3AP, D1) gives the player the option to channel the model’s soul and remove 1 or 2 wounds from the model. In exchange, every successful wound roll inflicts a number of mortal wounds to the target equal to how many wounds were sacrificed. The attack sequence then ends, so in essence the player is choosing to double damage and ignore saves in exchange for their model’s soul. One might expect a greater return if the soul in question belonged to the player, but if that were the case they would probably be playing Chaos.

For this analysis we’ll assume we have a Canoness with 4 attacks wielding the power sword and the Righteous Rage trait to re-roll hits and wounds to maximize the impact of the sacrifice. Because we’re dealing with a wide variety of options we’ll use an expected wounds approach, or simply the average amount of damage we can expect to be inflicted on the target. Both the wound roll and save roll values are after modifiers, and the effect of the Blade of Sacrifice is identical to the target not receiving a save at all. For a two wound sacrifice the expected wounds would double, and if the The Passion Sacred Rite is active then the expected wounds are multiplied by 1.16. 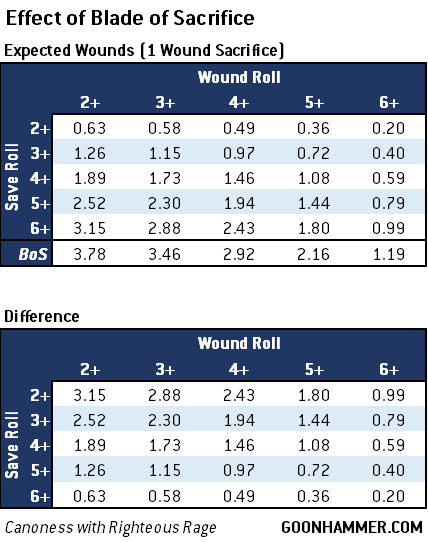 As expected the effect is most pronounced against targets with higher invulnerable saves or in situations where you’re facing against targets with multiple wounds. Things are pretty much the same if the Canoness takes Strength of the Martyr and gets the bonus to Strength and Attacks; the numbers are basically the same. Where things get awkward is that a Canoness can also carry a blessed blade, which provides +2S, +2D, and the same AP. The blessed blade is also able to get a benefit from the bonus Strength and Damage of Rapturous Blows, making it even more appealing and only costing more points instead of the model’s soul. If this weapon had dealt mortal wounds in addition to the regular damage dealt, or if it had dealt mortal wounds on a successful hit, then the argument for taking it would be a lot stronger. As it stands for the cost of a Relic slot and several wounds this blade likely isn’t worth the sacrifice.

If you have a thing for cybernetically enhanced humans in robes driving crazy sci-fi vehicles, then the Skitarii Veteran Cohort could be just for you. By paying an additional 2 points per model your Skitarii models get a 5+ invulnerable save (instead of a 6+), add 1 to their Attack and Leadership characteristic, and either receive the benefit of Light Cover when stationary (Rangers) or roll an additional D6 when Advancing AND ignore the Blast rule (Vanguard). That’s a lot, but is it worth losing 20% of your models as you go from 8 points per model to 10?

Offensively it depends on how the Skitarii are being used. In melee the bonus attack more than offsets the loss of models. At range the effect is pronounced, especially for units like Vanguard which can exploit powerful (and undercosted) Stratagems like Enriched Rounds with the basic model. Defensively we can look at the effective wounds offered by the increase in save. Effective wounds are based on the idea that when you make an armour save, you still have a chance of applying that same armour save to future attacks. The calculation is shown below.

This means a 6+ save (or ability that ignore wounds) effectively increases the number of wounds to 120% of the original value, 5+ to 150%, 4+ to 200%,  3+ to 300%, and a 2+ to 600%. If we look exclusively at the improvement in invulnerable save, going from an effective 1.2 wounds to 1.5 (25% increase) is identical to the percent increase of going from 8 points to 10. Since Skitarii have a 4+ save normally this is only relevant against attacks with an AP of -2 or better. In the case of Rangers the improvement to the armour save thanks to Light Cover is universally applicable, meaning against AP -1 or AP 0 attacks they still receive a benefit and the percentage improvement in effective wounds is higher than the points increase.

Faith in Many Forms

There are a lot of fun things in this book for folks of all faiths, whether that be in the divine will of the Emperor of Mankind, the mechanical perfection of the Omnissiah, or (as we’ll see next week) the temptations of the Ruinous Powers. While the Blade of Sacrifice has a novel rule, the impact isn’t really worth what you have to give up in terms of the opportunity cost of the Relic or the actual wounds lost. Fortunately there are plenty of other things for Adeptus Sororitas players to be excited about. For Skitarii aficionados the Veteran Cohort Army of Renown looks like it could be a lot of fun, and it definitely seems like you get more than what you paid for.