Hammer of Math: The > Good

In this week’s Hammer of Math we delve into the greatest question of 40K; has any faction featured in Psychic Awakening been screwed as much as Drukhari? The answer is no. With that out of the way we’ll take a look at some of the possibilities offered by the fifth book in the series: The Greater Good. We’ll take a look at some of the content for all three of the forces as they battle for the hearts and minds of humanity; the Genestealer Cults, the T’au, and of course the Astra Militarum.

Achilles Ridgerunners got some really interesting boosts in The Greater Good, with two abilities that make these units a real threat when appearing from ambush. 177 points will give you the ability to produce an average of 6 mining lasers (S9, -3 AP, 1d6 damage) and 18 heavy stubber (S4, 0 AP, 1 damage) shots. For 1 CP the mining lasers can get a +1 bonus to wound thanks to Overcharged Weaponry, while for an additional CP the heavy stubbers get a +1 bonus to both hit and wound through Raking Fire. This can be improved with a Primus who uses Meticulous Creed to re-roll 1s to wound against a designated unit when he deploys (possibly a second if you spend 1 CP to use The Heart of the Creed). This can be further improved by making the Primus and Ridgerunners Hivecult and giving the Primus the Hivelord ability to re-roll hit results of 1. If necessary you can also add a Jackal Alphus to add a +1 to hit via her Priority Target Sighted ability, which can be important since the Ridgerunners will often be at a -1 to hit when they show up since they moved.

So how much damage can they do? Let’s split the attacks so that we can look at the mining laser and heavy stubber against an appropriate suite of targets. We’ll start with the heavy mining laser against a variety of targets. Since the combination of S9 and a +1 to wound makes any target of T8 or lower a 2+ to wound, I’ve decided to split the distribution via armor and invulnerable save. 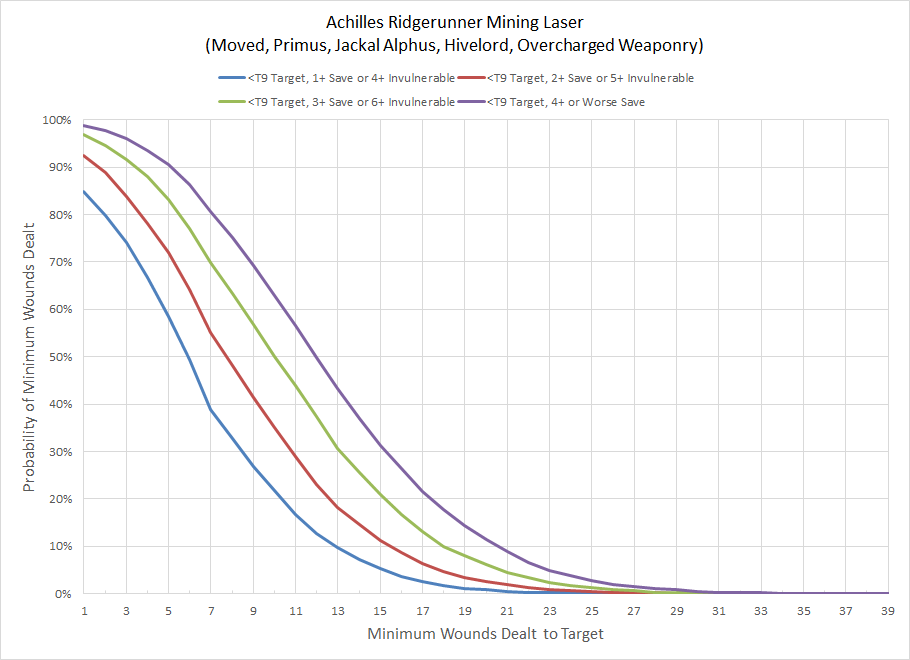 Even with the Jackal bonus to off-set the movement penalty and extensive re-rolls provided by the Primus Warlord, the results will degrade something like a Repulsor but probably won’t kill it. The problem is that while the wound roll is practically guaranteed the hit roll is still a 4+ that re-rolls 1s (around a 58% hit chance), and both the number of attacks and the damage rolls (the two gateway values which have the greatest impact on the outcome) are highly variable. Below you can see how the mining laser performs against various units and how many they’ll likely kill. 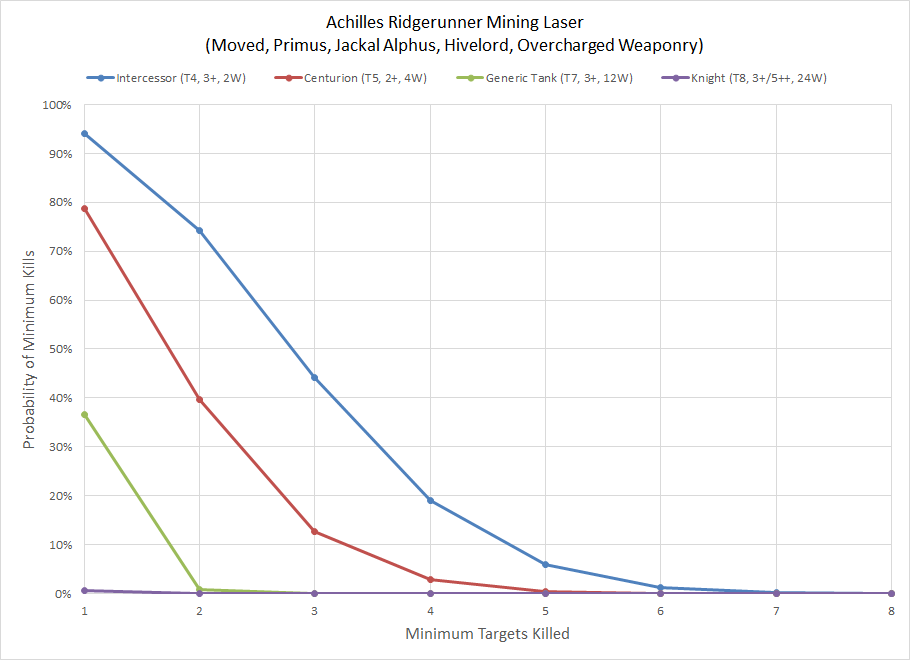 It’s hard to justify the investment in points, models, and CP to only have a 37% chance to kill a generic T7 tank platform. Things would be different if more than three models could be put into a unit, but as it stands right now there isn’t much to work with. On the other hand the Ridgerunner also has two heavy stubbers each, so perhaps it can be used to clear out hordes? 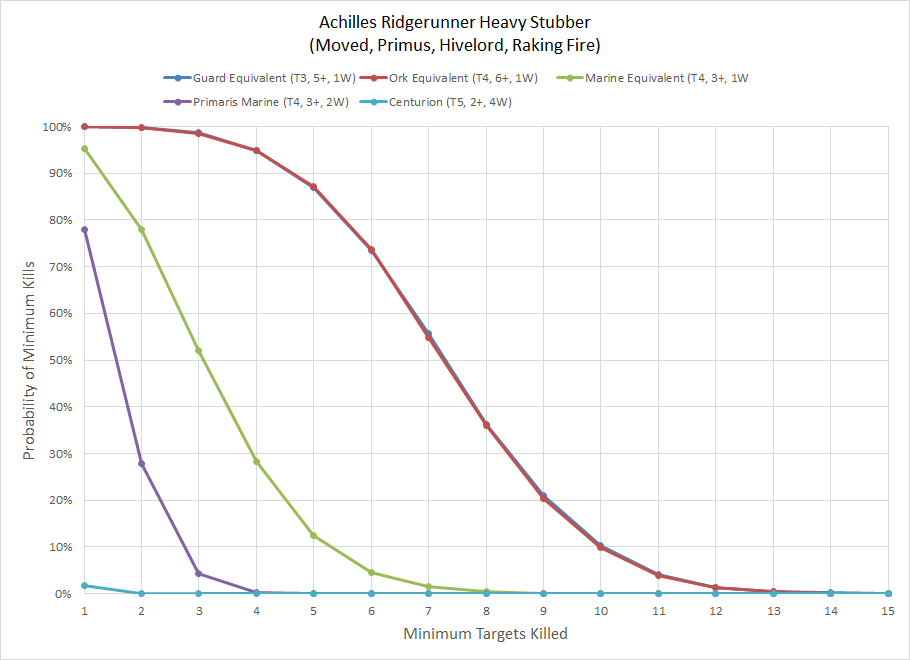 In this case the Jackal Alphus bonus was removed since Raking Fire has a +1 to hit bonus and presumably the Alphus would be focusing on a different target. The end result is pretty unpleasant against poorly armored troops like Guard and Orks, averaging around 7 models removed per Shooting Phase, but the low AP characteristic of the heavy stubber makes it less viable against power armor. Overall if folks were hoping that the Ridgerunner would see more action thanks to Psychic Awakening, I’m not sure how likely that is. They were a unit that some were higher on and the ability to pop out of blips without counting as moving may mean the difference in usability for them in the long run and ultimately get them onto some tables.

T’au received a lot of interesting options which could potentially expand their competitive picks beyond three Riptides surrounded by a swarm of Shield Drones. In particular the Farsight Enclave picked up some very impressive options. For example the Veteran Cadre Stratagem is exciting; for 1-2CP (depending on the number of models) you can give a unit of Crisis Suits a BS of 3+ and a WS of 4+. This can be further enhanced against a critical target with the new Coordinated Engagement Stratagem, which costs 2 CP and allows a unit of Crisis Suits to treat one enemy unit as if they have 5 markerlight counters. If the Farsight Enclave unit is within 6″ of the target then they can also use the Devastating Counter-Strike tenet to re-roll wound rolls of 1. While this seems unlikely you can use a Homing Beacon from a Stealth Suit to have a chance. Alternatively a Farsight unit could drop in with Drop Zone Clear to get an additional +1 to hit for 2CP, or keep a Commander nearby to use Command-and-Control Node for 1 CP to re-roll all failed wound rolls. There are actually so many options that there are more Stratagems available than modifiers. It’s possible (but not likely) to get two almost fully buffed squads attacking in the same Shooting phase if one can get within 6″ of the enemy. 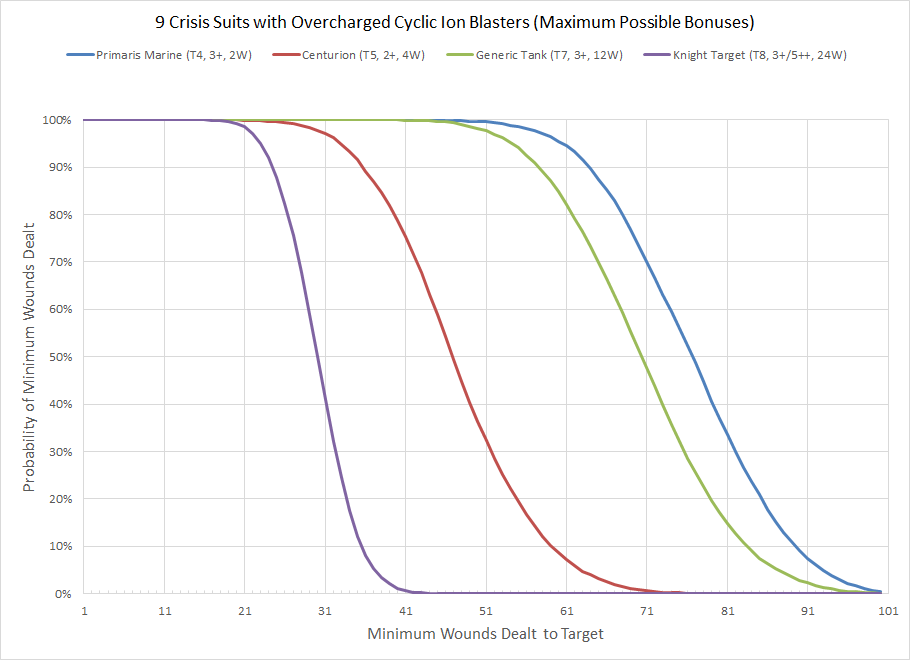 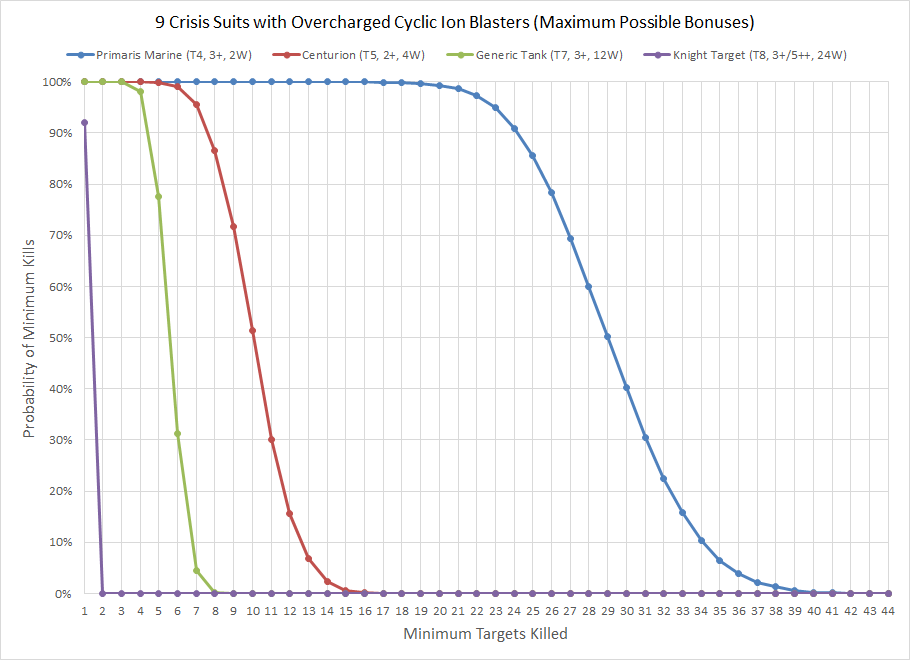 The major takeaway here is that you probably don’t need to bring 9 maxed out Crisis Suits to the party. Should you do, however, it’s unlikely whatever it is you want dead will survive. Most of the benefits (outside of Coordinated Engagement) are not limited to a specific unit, meaning it’s entirely possible to split fire and take out multiple targets. 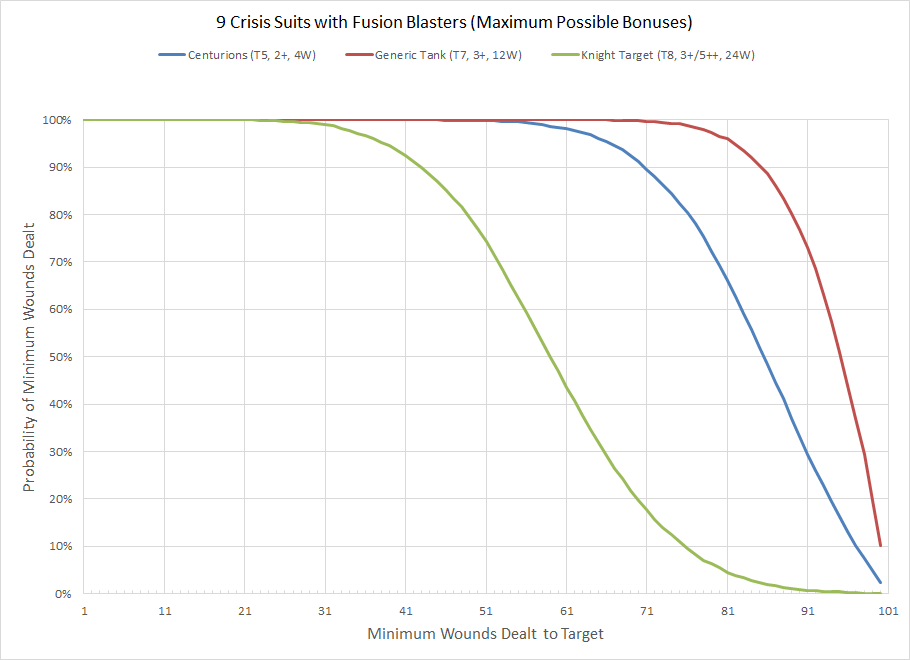 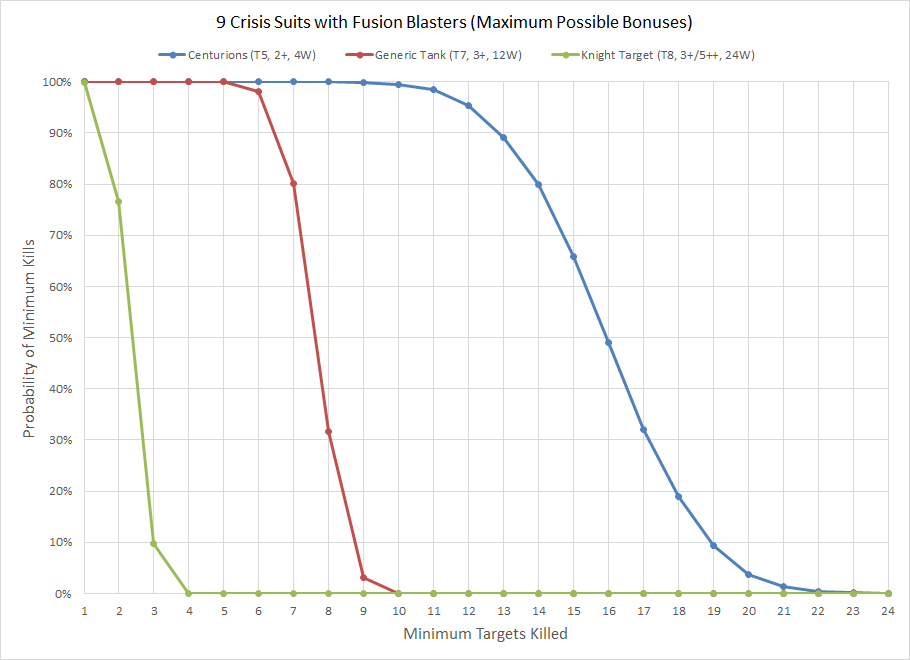 I hadn’t considered the possibility that this squad has a 77% chance of earning its points back against a Knight opponent, but play your cards right and apparently it does. Of course “play your cards right” means “somehow get a unit of Crisis Suits within nine inches of two Knights” which is a nice way of saying “play someone bad at 40K“. Either way there are certainly a lot of cool options here for T’au, and I’m excited to see what players will come up with.

Many of the boons The Greater Good gave Astra Militarum revolve around vehicles, particularly in the form of Tank Ace abilities. On the defensive front Master Mechanic looks phenomenal as it reduces incoming damage by one to a minimum of one. Those familiar with the first article in this series will recall that damage and the number of shots are driving modifiers which play a significant role in affecting the final outcome, and reducing damage inflicted by one point can mitigate the expected outcome by as much as half. On the offensive side Weapons Expert improves the AP of a weapon by 1 (even a Relic), and we know that AP has a cumulative effect which gets more powerful as the target’s save decreases. There are a few absolutely incredible Stratagems that should also be considered. New in The Greater Good is Hail of Fire which costs 2 CP to allow a LEMAN RUSS unit to fire the maximum number of shots.

Let me repeat that.

Instead of randomly determining the number of shots, fire the maximum. Remember what I said about how number of shots was a driving roll? Well with Hail of Fire you not only increase your offensive firepower by 71% but you also eliminate any risk of variance. This is an unquestionably powerful ability and well worth fielding, especially when combined with other effects such as Weapons Expert and the Hammer of Sunderance Relic (Heavy d6, S8, AP -2, D3), or the Vostroyan Firstborn Pride Stratagem which gives a +1 to hit rolls to a unit for 1 CP. Given that all Leman Russ tanks have the Grinding Advance ability which allows them to fire twice if they move less than half their Move characteristics that’s potentially 12 fixed shots, and since all Tank Commanders can issue the Gunners, Kill on Sight! order to themselves (re-roll 1s to hit) you’re likely to have all 12 shots hit.

For this section we’ll look at both the Hammer of Sunderance and a demolisher cannon. For both scenarios we’ll assume a Tank Commander that hits on 2s (Vostroyan or Cadian with a relevant Stratagem), that the Tank Commander has used both the relevant order and has the Weapons Expert trait on the turret weapon, and that Hail of Fire is active. This will only look at the turret weapon, so potentially expect a few more wounds from the supporting lascannon or heavy bolter if used against the same target. 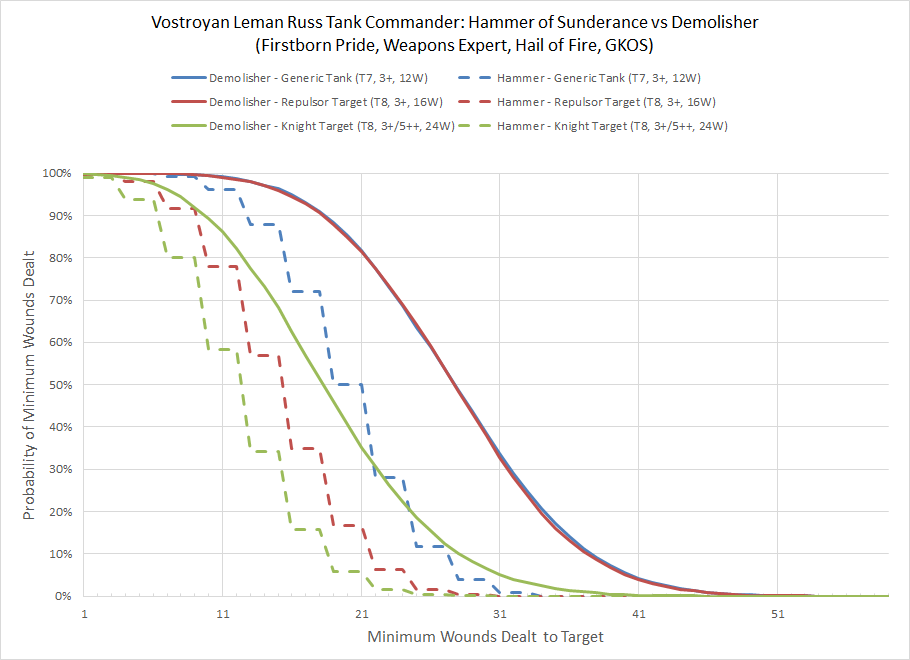 There is some overlap between the wound curves as the demolisher wounds the T7 and T8 targets the same. I think the Vostroyan Tank Commander with a demolisher could be a potentially devastating addition to any Imperial army, and as a long time fan of this weapon I’m glad to see it finally produce the level of fear it so richly deserves. Across the board we see the potential for mayhem caused by the effect of 12 shots that are extremely likely to all hit. Even the Knight isn’t safe, with a single Tank Commander potentially getting a one turn kill 22% of the time. The threat range is also significant, thanks to the Vostroyan Heirloom Weapons doctrine adding 6″ to the range of the Demolisher and the Unyielding Advance Stratagem from the Emperor’s Fist Tank Company allowing the unit to move and fire twice regardless of how far it moved.

Overall this looks to be an exciting update. The options available to T’au and Astra Militarum should open up some interest possibilities, with T’au Crisis Suits potentially getting a comeback and the demolisher regaining its place as a terrifying weapon. While Genestealer Cultists may not have received the boon they were hoping for, they still got a few nice options and powers. Such are the tribulations for serving the Hive Mind, but all shall be rewarded in the end when the skies darken and the galaxy is consumed in an unending swarm of teeth and instinctual rage. That, or 9th Edition rolls around and mixes everything up all over again.