Hammer of Math: The Lockdown Problem

In this week’s Hammer of Math, Andrew “Pendulin” Haywood is stepping in for Kevin to examine objective placement in the Lockdown mission and other similar missions that have disappearing objectives.

Last week, One_Wing talked about the new Eternal War missions in Chapter Approved 2019, and mentioned the Lockdown mission, where players place six objective markers to start the game, but then four of those disappear as the game went on. TheChirurgeon put some of those ideas to the test in his Battle Report game. It’s an interesting mission that makes for some difficult strategic choices, both about placing objectives and how much of your forces to commit to holding an objective that won’t be around next turn.

But as the math-obsessed nerds we are, this got us thinking: Is there a best way to “win” the objectives minigame in Lockdown?

Let’s give some context. In Eternal War: Lockdown mission (from the Chapter Approved 2019 Matched Play missions), players take turns placing objective markers, as per normal rules. However, there are two changes that make this mission interesting:

There’s a lot to unpack here, so let’s run through an example: 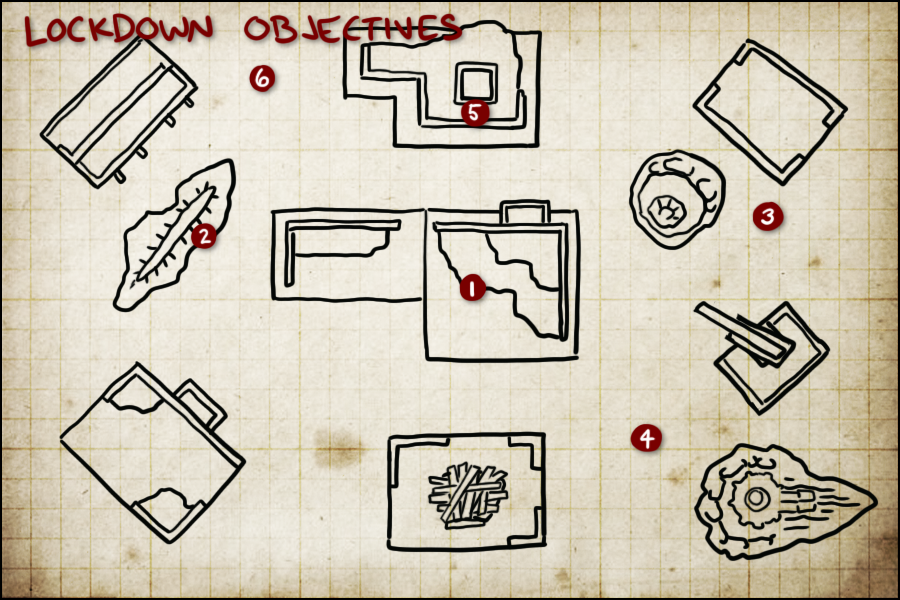 Alice and Bob are going head-to-head in a game of 40k using the Lockdown mission. Alice is the first player and she’s playing an army that’s designed to hunker down and hold their ground. Bob is coincidentally playing an army with a similar design.The objective markers are placed so that three are near Alice’s deployment zone, and the other three are near Bob’s.

However, Alice now faces an interesting choice. There are four markers left on the battlefield: two near her deployment zone and two near her opponent’s. There are also four objective numbers available: 2, 3, 4, and 5. To give her the best odds at victory, she wants objective 4 and 5 to be on her side of the battlefield, but how does she make that happen?

This is the Lockdown problem. What’s Alice’s correct move? Is there a correct move here that will give her more long-term scoring opportunities?

To make this problem easier to talk about, we’ll start with a less complicated example and work up from there. First though, let’s introduce some terms:

Pool: The set of objective numbers not yet assigned to markers, notated by comma-delimited objective numbers wrapped inside braces. For example, the Lockdown problem starts with the pool being {2, 3, 4, 5}, or the numbers we could randomly assign to the objective markers on the table.

Pool Size: The number of elements in the pool, and also the number of markers on the battlefield.

Next, for our exercise let’s shrink the pool down to just two elements: {2, 5}. We now have two markers on the battlefield, so let’s say that one is in front of Alice, and the other is in front of Bob.

Finally, let’s drop the “number” part of the objective number and replace them with objects, as objects are easier to identify with than numbers, and all this number talk is going to get confusing. We’ll replace objective 2 with a disgusting, dirty boot that’s falling apart. Nobody wants that boot. Have you seen where it’s been? Gross.
We’ll then replace objective 5 with a jar: glorious and majestic. That jar radiates light and sings an angel’s choir. It pays your tax bill, and fixes that leaky pipe in the basement. Praise be unto the jar.

Because of this, we see that when the pool size is 2, Alice’s choice doesn’t affect the outcome.

We’ve shown that when we’re down to our last two objectives, then the marker choice is irrelevant. Let’s now expand it to three objectives and see what happens.

Using our pool notation, let’s look at a pool of {Boot, Boot, Jar}, so that we have two equally undesirable boots, and a single highly sought after jar. It’s Alice’s turn to choose, and there are two markers in front of her and one in front of Bob.

With two markers in front of her and one in front of Bob, we naively think that Alice has a two-in-three chance at getting the jar. But let’s run the outcomes to see where we end.

If she chooses one of the markers in front of her, then there is a 1/3 chance of the jar landing there. If the jar doesn’t land there (which happens 2/3 of the time), then the pool becomes {Boot, Jar} with a marker in front of her and a marker in front of Bob. However, we already demonstrated when in a pool size 2 situation, then the choice is irrelevant and all options are equally likely. So 1/3 of the time she gets the jar, and 2/3 of the time it’s down to a 50/50 coin flip. Using the power of maths, we can add our outcomes to see what likelihood Alice has of getting the jar by picking on of her markers:

If she chooses either of the markers in front of her, then there’s a 2/3 chance of her getting the jar.

If she chooses the marker in front of Bob, then there’s a 1/3 chance of the jar landing there. If it doesn’t land there (which happens 2/3 of the time), then the remaining markers are all in front of her, which means the jar is guaranteed to land on her side. Again using the ancient techniques of maths, we have:

If Alice chooses Bob’s marker, then she has a 2/3 chance at getting the jar. This likelihood is the same as when she chooses a marker in front of herself, 2/3, and also matches our naive prediction.

As with the pool size 2 situation, all choices result in the same odds. Because of this, Alice’s choice doesn’t affect the outcome.

Hold on, you interrupt, what about when the pool is {2, 3, 4, 5} and so Alice makes multiple choices? She can use a strategy where her second choice is influenced by the outcome of her first choice, you say. What if Alice and Bob’s armies have different designs, you point out, and so each objective number is worth different amounts to each player? All good points, I grant you, but let’s find a better way of tackling these situations.

I wrote some software to simulate the Lockdown Problem, including six different strategies the players could use, and ran each of them ten million times. If players can influence the outcome, then we should see some impact on the number of times different outcomes occur. On the other hand, if player choice has no effect, then we should see an even distribution of all outcomes regardless of strategy. 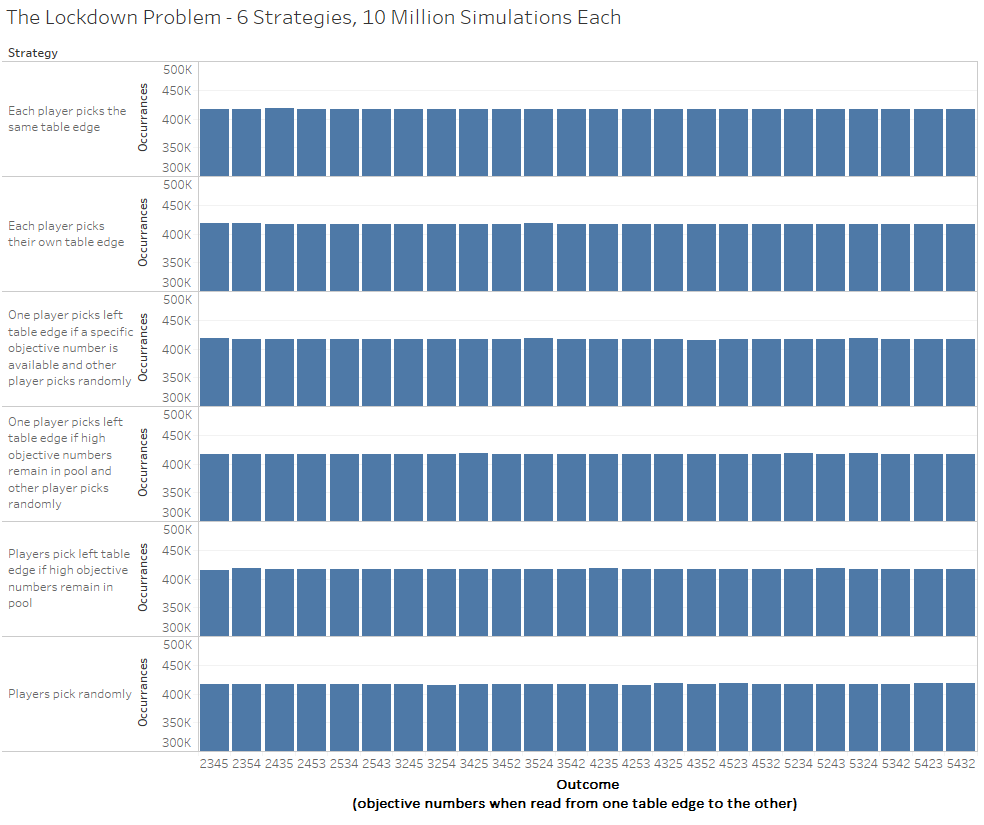 Big, even, flat lines! Regardless of which strategy was used during the millions of simulations, each objective order showed up at the same rate. This is strong evidence that player choice has no impact on the outcome. That’s both pretty good mission design, and while it’s a little bit boring, it’s also good news for you, the player – you don’t have to worry about how you pick the randomly-allocated objectives.

All signs point to the results of the minigame being entirely random. We could dig deeper, adding weights that change or other player strategies. We could add additional players or increase the pool size to absurd amounts. We could, but at this point we’ve covered enough ground that I can confidently say that the only way to influence the outcome of the Lockdown Problem, the best way of winning this minigame is as follows:

Or send them a link to this article and tell them it has a secret strategy for beating this minigame. If you do it right before a match, then they won’t have time to read this and will have to take what you say at face value. Get into their heads, mess with them. That’s the true way of beating the Lockdown Problem.

On a more practical note, the real Lockdown game is objective placement and capture moreso than selection. Make sure the objective you nominate as 1/6 is one you can easily hold for the entire game, place the objectives you can where you’ll be able to reach them and score them regardless of what numbers they’re assigned, i.e. place them outside of your deployment zone if you are planning to rush forward, and in your zone if you plan to castle up. In-game, keep track of what objective will be the next one to come off the table and don’t overcommit to any objectives that are going to disappear soon.

So that wraps things up for our look at Lockdown. As always, if you have any comments, feel free to drop a note in the comments below or email us at contact@goonhammer.com. If you have any questions that you think would be a great topic for Hammer of Math we’d love to hear about them! We have a form set up that you can submit your questions here.