This week’s Hammer of Math takes a look back at 2021 and some of Kevin’s favorite articles. Don’t worry reader, we’ll be back next week with actual math about the resurrection of the Tyranid Monster Mash.

53,883 words, not including this article. That’s how much I wrote in Hammer of Math this year. It feels weird in retrospect; that’s a lot of work even before you consider the calculations that went behind the writing. I know that 2021 has been a rough year for a lot of us, and it’s funny to think about how something as simple as ranting about stupid numbers for game about miniature Space Barbies can provide some relief. I hope it’s done so for you.

This week I’m going to take a look at the five articles this year that I feel were the most notable to me. Whether it was because of something behind the scenes like how I had to solve the problem, or what the numbers revealed, or maybe just because it was fun to write. They aren’t in any particular order or ranking. Just things I liked to write about. 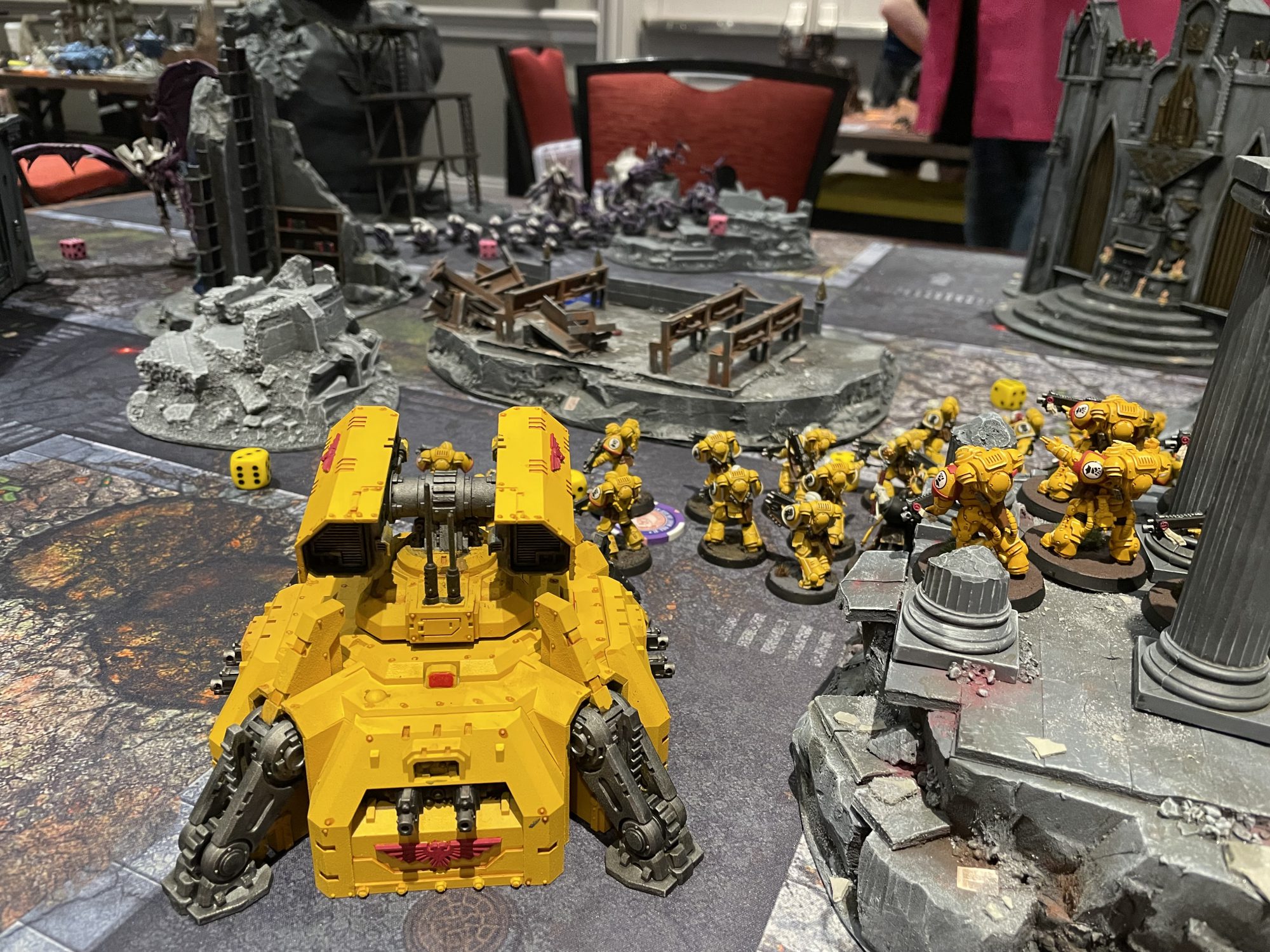 When Three Inches Is Too Much

First up is actually last week’s article where I used the power of simple geometry and CAD software to show that Games Workshop’s own rules makes it impossible to use fortifications. Basically in 9th Edition the rules for deploying fortifications are unnecessarily taxing, and by using the official layouts provided by Games Workshop for their Open series I showed that the probability that a player wouldn’t be allowed to even deploy something like a Hammerfall Fortress is significant. This is nothing new for anyone who regularly plays matched play games (even our own Blunderdome rules limited how many fortifications you could bring), but to see the actual math was pretty fascinating.

Another article that I really enjoyed was when I did the numbers behind the Kill Team attack sequence, and the follow on articles about boltguns, and expectations for various units. This article was fun because it was an opportunity for me to explore the math of a completely new rules set and then figure out a way to simulate the attack sequence in Python. I am a rudimentary programmer at best so it was an enjoyable challenge, and while the game itself doesn’t really do much for me (Necromunda is my preference for small scale combat), the rules behind it are pretty good.

In Which Everyone Says I Am Wrong

For retro week I decided to take a look back at the history of scatter in Warhammer 40k, and what makes this article one of my favorites (aside from the nostalgia) is the fact that the comments were decidedly opposed to the idea of blast weapons and were grateful for their absence. I will freely admit that carefully spacing out models so as to minimize the impact of a blast weapon was a pain, but I would like to think that anyone who’s dropped an Apocalyptic Blast Marker on the heads of the opposing forces can acknowledge there’s something innately satisfying about it.

Adeptus Titanicus is a LOT of fun and if you haven’t had a chance to play it you definitely should. Back in July Games Workshop revealed a new series of volkite weapons with two new traits called “Voidbreaker” and “Beam” which increased damage against shields and had some interesting positional effects. Unfortunately while the rules were cool, the new weapons were absolute garbage which did very little compared to other shield killers like the vulcan mega-bolter. Still it was nice to check them out.

The final article that I want to highlight was actually one of the first I wrote in 2021; a look at Mortarion and how his rules had changed in 9th Edition. I like this article a lot for a couple of reasons. First, it was really cool to see how much they had buffed the Primarch until he was actually scary (even surviving a Warlord Titan 30% of the time). Second, it really highlighted how Games Workshop seemed to be taking a close look at some of the core flaws of units in 8th Edition and started to address them. Plus any opportunity to show off some of the incredibly well painted Mortarions that the Goonhammer crew have done is always a welcome one.

And the Stats Version

Of course this wouldn’t be Hammer of Math without some statistics, so if you want a more data-driven approach to the best Hammer of Math articles, here are the top five HoM articles in 2021 based on total page views:

See You Next Year

When I started Hammer of Math back in September of 2019, I wasn’t sure what to expect. I just new that I wanted to contribute to this awesome site, and that a math-based series on the probabilities of one of my favorite games was something that could be fun to write about. The results have been incredibly rewarding, both in terms of how the work has pushed my own abilities and in how welcoming and appreciative our community has been. As always, thank you for reading.