Hammer of Math: Tournaments in Winning Position and Other Key Performance Stats, Explained

Hello again, Dear Reader! Primaris Kevin is once again out this week, taking some much-needed paternity leave to celebrate a new arrival. And that means you get me again, focusing on competitive play statistics. If you’re a regular reader on the site, you’ll likely be aware that we recently acquired, updated, and relaunched the 40kstats website, an online archive of tournament results and statistics. But while some of those statistics are pretty self-explanatory, others are more difficult to decipher. And which stats matter when you’re trying to evaluate a faction and its viability?

In today’s article I’m going to run through the major stats we use on the 40kstats site, talk about how they’re calculated, and what they mean when evaluating a faction. I’ll also talk about a few that aren’t being displayed on the site yet, but will be in the near future.

First, let’s start with the easy ones:

We pull most of these stats from the ITC Battles App, the premier app for tracking and managing your games. Data from games – both practice and tournaments – are collected in the app, filtered to remove bad results and old mission packs, and then aggregated for statistics purposes.

Awesome, let’s get into the Good Stats.

These are the stats that we already pull and calculate. Most of these come from GT games played and reported in Best Coast Pairings, the premier tournament management app.

A good example of how we use this data is to look at Tyranids right now – Since April 25th, Tyranids have made up 10.4% of the field at GT events, and during that time have a TiWP share of 35.7% – that’s insanely high. As a result, their TiWP ratio is a staggering 3.43. Their average first loss occurs in round 3.2.

However while Tyranids have been everywhere, it’s hard to track their dominance against other factions. To put this into perspective, here are some comparable TiWP ratios from this year:

While Tyranids don’t quite have the astronomical TiWP ratios of the Custodes and Harlequins, they have two other stats that are very worrying – first, their 10.4% field ratio is massive for a faction with a ratio this high, and second, their average first round loss is almost a full round later than most of these other dominant factions. So while Tyranids aren’t putting up the raw win percentage totals that Harlequins did, they’re also clearly a stiflingly good faction that even novice players can pick up and perform well with. This is likely in part because the faction’s strength is built on a large number of undercosted units with overpowered datasheets – there’s plenty of raw power that doesn’t require trickery to use.

Here are some stats we’ve been talking about, and may have showcased in the past, but haven’t yet put on the site on a regular basis. They need a bit more vetting, but we’re looking to start having them up soon.

While we’re here, let’s do a quick update on Go First Win Rates: After two years, GW finally got there with Nachmund. Our data in the ITC Battles App Through May shows that the Go First Win Rates for Nachmund Missions is 52.5% for Tournament games and 54% for practice games, averaging out to 53%. 52.5-47.5 is extremely acceptable and as close to perfect as I think you can get in an IGOUGO game like 40k. Did some of it require adding a bunch of factions that can annihilate half the field going first or second? Possibly. But the changes in Nachmund scoring and ongoing tweaks to secondary objectives and an emphasis on more terrain didn’t hurt, either.

Currently, the faction that relies the most heavily on going first to win is the Astra Militarum, which wins 61% of its games going first and 35% of its games going second. That’s… incredibly dire, but anyone who plays the faction already knows this. What’s more surprising are Harlequins, Custodes, T’au, and Tyranids four armies that all performed better going second, and are major drivers for the decrease in overall go-first win rates.

Pythagorean Wins are a concept that originated with Bill James while he was looking to model the number of games a baseball team “should” have won based on the number of runs scored and allowed. Basically if you think of a game of 40k as a game of scoring VP and denying points, then an army/faction that’s good at creating large differentials should, over time, create better results. In practical terms, this means that armies that blow out weak opponents and lose close games should be better than armies that win big and lose big.

While the original formula for pythagorean wins is (points scored^2) / (points scored^2 + points allowed^2), that’s been tweaked by various sports based on minimizing prediction error. Similarly, after doing some error calculations, I ended up on a tweaked coefficient that yielded the following table: 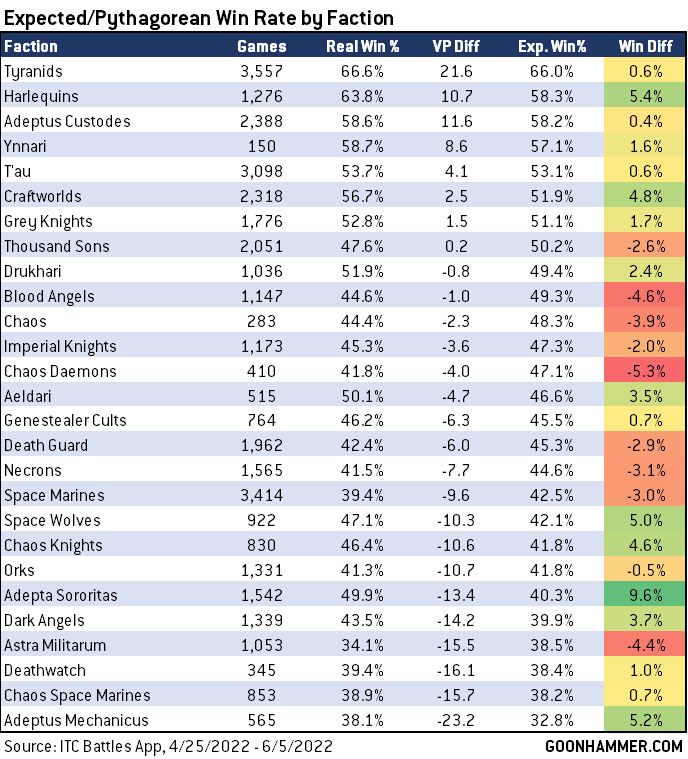 The other general idea is that factions that outperform their expected win percentage are likely to drop in the future, while factions overperforming are likely to improve. In a lot of ways this can be a leading indicator of performance if we can get the data fast enough. It might also tell us where a faction is being propped up by a small number of superior players. Finally it can also tell us when factions win small and lose big, and give us some food for thought on future analyses. In this case it suggests that Space Wolves, who have among the lower average VP scored (67.5), are squeaking out wins and getting blown out in their losses. In similar fashion, Dark Angels players tend to score more points (73 average) owing to some strong secondaries, but also give up more than any other faction (78.3).

And this in turn leads us to a personal stat:

There’s a lot of stats work for us still to do around these, but I’m excited to keep working on it and find ways to better describe 40k and the dynamics occurring in a game.

That wraps up our look at stats. Hopefully you’ve got a good idea now of what the key stats are and how we’re calculating them, and how they can explain what’s going on with a faction and when something is broken. We’ll be doing more work on this in the future, so keep dropping into the new 40kstats site – which updates Mondays – and logging your games in the ITC Battles App.