This week’s Hammer of Math takes a deep dive into the optimal strategy for applying Transhuman Physiology and Gene-Wrought Might courtesy of a reader question. If you would like a question answered in this series, please use this form to submit it.

Reader Alcyon provided a fantastic question which should be a lot of fun to answer.

I would love to know the approximate value of some stratagems across a range of different unit types. For example, how much should you expect Gene-Wrought Might to improve the damage done by a unit, and are there better uses for it in some squads than others? I can’t help but feel that there must be “optimal” uses for some stratagems and that some are strictly better than others in terms of return for your CP.

Another example might be a way of determining whether Transhuman Physiology is “worth it” when you are merely reducing a weapon wounding on 3s to 4s or whether it’s usually only worth the CP if you are going from 2+ to 4+. Obviously this is tough because of the wide variety of variables but I think Transhuman is such a good rate that it actually doesn’t matter that much, and other stratagems that cost similar amounts aren’t as valuable. But it’s hard to compare them without a number of comparable scenarios (maybe Gravis v. T4 against some stock weapons, I dunno.)

Thanks for reading, love the column, so proud to be a patron! Long live Hammer of Math!

One of the biggest challenges is establishing the ‘value’ of something as subjective as a Stratagem. This is particularly true when it comes to Stratagems that depend on external factors such as the number of attacks being dealt to a particular unit, or the quality of the attacks being made. The easiest point of reference are attacks that deal mortal wounds on a single model like Hellfire Shells, Clavis, or Diseased Effluents; in general the ratio is around 1d3 mortal wounds per command point. The value of a CP changes dramatically based on the circumstances, but as a starting point using a threshold of 1 command point per 2 wounds dealt or saved seems viable.

The Astartes Stratagem Transhuman Physiology costs 1/2 CP (depending on if the target PRIMARIS unit has more than five models) to allow the unit to ignore wound rolls of less than 4 for the duration of the phase. Since rolls of 1 already always fail this effectively cancels out all wound rolls of 2 or 3, meaning the Stratagem is only useful against attacks which have a 3+ to wound or better. To determine when we might want to use the Stratagem we can calculate the amount of incoming damage that the unit would have to face in order to result in at least two more wounds being saved. This is the method that I came up with:

To use these charts, start off with the expected wound value (2+ or 3+). Next, multiply the expected number of attacks by the amount of damage dealt. It’s important to disregard excess damage that will be ignored if it kills a model; if an attack has a Damage characteristic of 4 but the target is a 2 wound Primaris Intercessor then you only multiply the incoming attacks by 2. When dealing with an odd number (for example 2 damage attacks against 3 wound models) then divide the Wound characteristic of the target by the number of attacks required to kill it (3/2 or 1.5 damage per attack). Once you’ve established the damage dealt, look up the chart to determine if the incoming damage is greater than the value listed. If the incoming damage is greater than what’s on the chart then Transhuman Physiology should save enough wounds to be worth the CP. 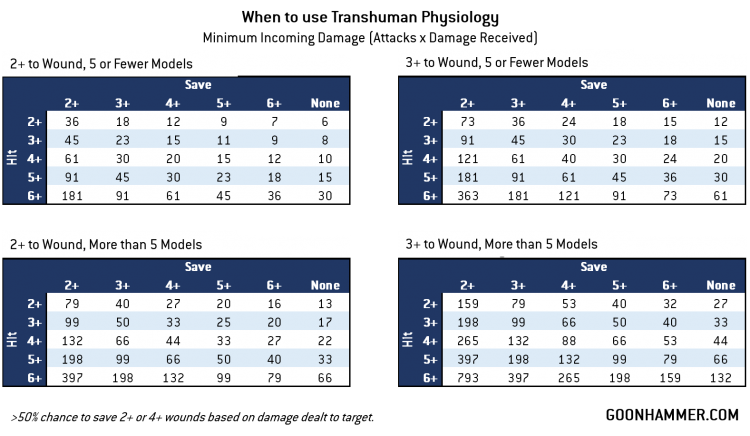 For example, we have a unit of 10 Intercessors being attacked by six Inceptors armed with plasma executioners. As they do, each Inceptor is overcharging their attack and so is hitting on a 3+, wounding on a 2+ and dealing 2 points of damage. There’s a total of 36 attacks (plasma incinerators have Blast and each Inceptor fires two of them) so the total incoming damage is 72. We’ll say the attacking unit is not in the Tactical doctrine so the AP is only -3, meaning our Intercessors get a save of 6+. We find the chart for the 2+ to wound against 5+ models, look up 3+ to hit and 6+ save, and see that the expected incoming attack of 72 points of damage is well beyond the 20 damage threshold needed to justify the use of the Stratagem.

Incidentally even at a 4+ to wound 36 plasma incinerator attacks averages 10 dead Primaris so it’s probably not worth it on the other side, but at least the chart works.

The offensive counterpart to Transhuman Physiology, Gene-Wrought Might is a 1CP Stratagem that allows a PRIMARIS unit to automatically wound on any attack that has an unmodified hit roll of 6 in the Fight phase. To figure out the minimum amount of damage needed to be applied to justify the Stratagem we can apply a variation of what we did in the previous section.

Now here’s where things get interesting; the Weapon Skill of the attack is irrelevant. The reason for this is because the effects of Gene-Wrought Might are wholly independent of the probability of hitting. On average one in six attacks will result in an unmodified hit roll of six, and since those rolls were going to result in a hit anyway the target number doesn’t matter. What does matter is the save and wound rolls; as expected the Stratagem is most effective when the probability of wounding is low. To use the chart below, multiply the Damage characteristic of the weapon by the number of attacks. As with the previous chart take care to consider the potential for lost wounds; a thunder hammer hitting an Ork will only inflict a single point of damage. 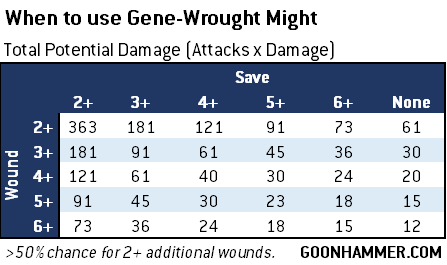 Thanks to Alcyon for providing such an awesome question! Hopefully this provides the reader with some insight into a fun method of calculating probability and is relevant for play. I know I learned a lot.