Hammer of Math: Votann Break All the Rules in Warhammer 40k

This week’s Hammer of Math takes a look at Codex: Leagues of Votann and how incomprehensibly game breaking their abilities are.

Three years ago this week I wrote my first article for Hammer of Math, covering the Warhammer 40k attack sequence chain and how it is divided into a series of driving rolls (attacks and damage) and gatekeeping rolls (hit, wound, saves). This sequence is both familiar and predictable, while also providing plenty of opportunities for designers to tweak things. Being predictable and familiar is particularly important in the context of a game universe, and drastically messing with this sequence or expectations can have severe game balance issues. Four of the fundamental expectations of Warhammer 40k are that (1) tough things are hard to wound, (2) invulnerable saves are a reliable floor, (3) excess damage is lost, and (4) that probability drives the results of the game.

Leagues of Votann breaks them all.

Eye of the Ancestors (is Bullshit)

Eye of the Ancestors is the core faction mechanic of Leagues of Votann. The ability focuses around Judgement Tokens, which are granted to enemy units under a variety of circumstances. Votann units gain a bonus to their attacks depending on the number of tokens (one to a maximum of three), and the bonus is in the form of automatically wounding the target based on a hit roll result. At three tokens you automatically wound your target on a hit roll of 4+. Then on top of all that, the automatic wound is counted as having a result of 6, meaning that abilities which trigger on wound rolls of 6 (such as magna-rail weapons) will also automatically go off.

These circumstances where a token is applied include whenever an enemy unit performs an action (including psychic actions), whenever they destroy a friendly unit, and at the end of each enemy turn the Votann player puts one token on an enemy unit that controls an Objective Marker. Kâhl units can use their Grim Efficiency ability to apply them, and the Greater Thurian League subfaction can use their 1 CP Appraising Glare Stratagem to add another token on a unit that was hit by Grim Efficiency. Greater Thurian League units also have Ancestral Judgement, an ability which units that have one or more Judgement Token count as having one more. There are also plenty of other Stratagems that generated tokens. The bottom line is that it’s trivial for a unit to automatically wound on a 4+, and there’s absolutely no cost associated with using the ability.

We’ve been here before and we shouldn’t have gone back.

The Impact of Automatically Wounding

The probability of gatekeeping rolls is multiplicative. If you have a 50% chance of hitting (4+ to hit), and a 50% chance of wounding (4+ to wound), then your net probability of hitting and wounding is 25%. With Eye of the Ancestors a significant portion of the hit rolls will simply disregard the wound roll. The impact of this ability largely depends on the wound roll; as one would expect the change is significant against targets which require a 5+ or 6+ to wound, but even against easier targets the effect can be the equivalent of a re-roll or target modifier. 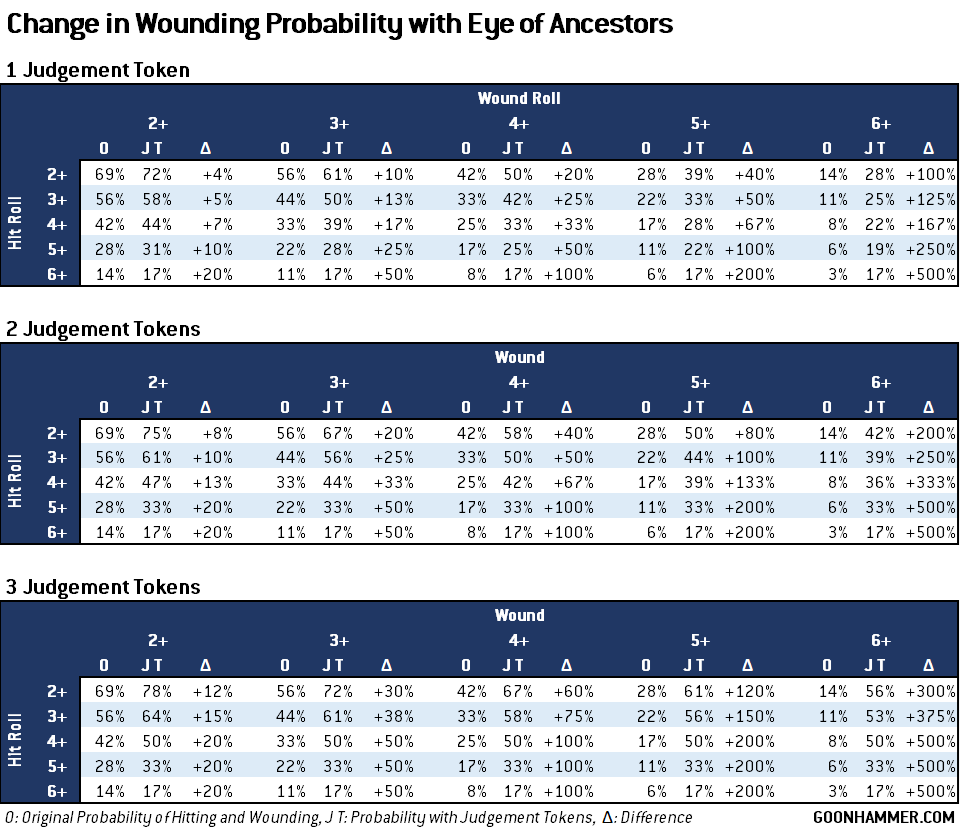 Note that this bonus also applies to abilities with trigger on a wound roll of six, such as the Ion Storm Stratagem (ion weapons with an unmodified wound roll of 6 inflict 1 mortal wound in addition to normal damage, to a maximum of six) or the excess damage transfer ability of magna-rail weapons (see below). With 3 judgement tokens these abilities are 3 to 6 times more likely to trigger than without the ability.

Saves are an important part of playing Warhammer 40k. They provide a sense of agency to the player being attacked, they serve as another knob that designers can tweak to provide flavor and balance to a unit, and they are extremely powerful in how they change the effective wounds of the target. In the case of invulnerable saves they provide a resiliency floor which also has a connection to the lore of the game. Some forms of protection go beyond slabs of metal and ceramite, and whether that protection be from faith in the God-Emperor, archeotech of impossible complexity, or some kind of alien ability, those forms of protection are generally immutable. Abilities which disregard invulnerable saves are intended to be rare. So naturally magna-rail weapons simply do it with every attack. To make things worse, on a wound roll of 6 (or a triggered Eye of the Ancestors), any damage that is in excess of the target’s Wound characteristic is transferred to another model in the unit – again without the opportunity to save. In other words when the ability is triggered the efficiency of the weapon is perfect, with no points of damage wasted.

It’s important to understand the extent to which this ability will affect the resiliency of units that rely on invulnerable saves. Every wound a model saves is another wound that the enemy has to inflict, and by examining the Save characteristic you can get a sense for how many wounds a model effectively has. The equation and chart below provide some context. Note how the effective wounds value increases significantly as the save increases, with the effective wounds capped out at 600%. This chart works for offense as well as defense, and to calculate the change in effective wounds you simply subtract the difference between the old and new value. For example, a Zoanthrope has a 4+ invulnerable save which translates to an effective wounds of 200%. In other words (and with all other probabilities being equal), the 4-wound model with the 4+ save is as survivable as a 8 wound model with no protection. 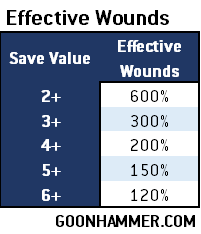 Eliminating invulnerable saves now means those fragile units are completely exposed. Previously the ability to ignore invulnerable saves was either associated with unique units (such as a Callidus Assassin) or specialized effects like the 2CP Aeldari Linked Fire Stratagem. Magna-rail weapons not only make it much more prevalent, but combine it with a high AP and a high chance of getting perfect damage efficiency for use against units of any Wound characteristic. 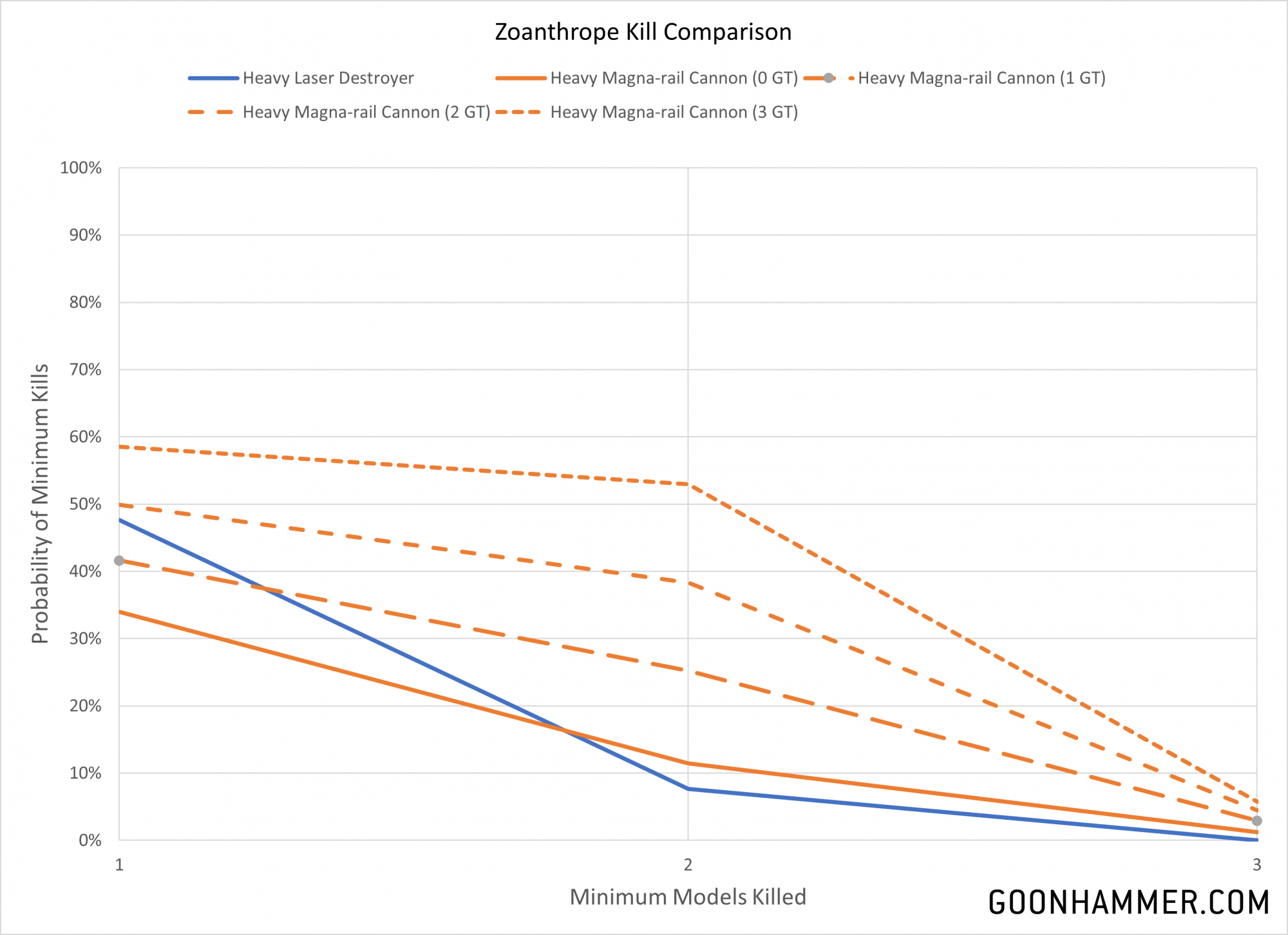 The chart above is a comparison between the heavy magna-rail cannon on the Hekaton Land Fortress, and the heavy laser destroyer on the theoretically comparable but somehow more than 100 points more expensive Repulsor Executoner. The target is the lowly Zoanthrope, a 4-wound model that will get wounded on a 2+, with the protection of a 4+ invulnerable save. The only reason the heavy laser destroyer even has a chance of killing two Zoanthropes is because it gets two shots. In contrast, when the target unit has 3 Grudge Tokens on it, the heavy magna rail cannon will simply delete two Zoanthropes 50% of the time.

In addition to having an incredibly powerful subfaction ability, the Greater Thorian League also have access to the only named character in the army. Ûthar the Destined is a High Kâhl who can apply his Ancestral Fortune ability to change the result of a hit, wound, damage, or saving throw to an unmodified 6 for a friendly unit within 6″ once per battle round. When combined with a single Judgement Token for Eye of the Ancestors and a magna-rail weapon like the heavy magna-rail cannon on a Hekaton Land Fortress the end result is guaranteed damage to any target with a Save characteristic of 3+ or worse. In the case of the heavy magna-rail cannon the damage is 2D3 + 6, meaning you are guaranteed to inflict at least 8 wounds on a target. And since Ancestral Fortune is applied after the hit roll is made there’s a solid chance you won’t have to use it at all. This produces some interesting results. The chart below shows you the probability that 2D3 will generate at least the target value; add 6 to that number to get the damage distribution of the heavy magna-rail cannon. For example, the probability that the damage will be 11 is 33%.

Where things get really ugly is that Ancestral Fortune applies to both hit and damage rolls, and modifies the roll result (as opposed to an individual die). This means that should you manage to trigger Eye of the Ancestors while firing a heavy magna-rail cannon, you can then modify the 2D3 into a guaranteed 6 and inflict 12 points of damage on the target. Since Greater Thurian League gets Ruthless Efficiency so they can re-roll the hit roll, if the target has the equivalent of 3 Judgement Tokens on it you have a 75% probability of inflicting 12 points of damage. The remaining 25% of the time you don’t get the 4+ on the hit roll after the re-roll and have to convert it into a 6, leaving you with only 8 guaranteed points of damage.

Here are some fun notes on this effect:

The impact of this combination can easily be seen in the chart below. The blue line is the heavy laser destroyer, the orange line is a heavy magna-rail cannon with various levels of Eye of the Ancestors, and the yellow line is the combination of 3 grudge tokens, Ancestral Fortune, and a re-roll on the hit roll if needed. To my knowledge this is the first time that Games Workshop has ever allowed a combination that produces guaranteed damage. 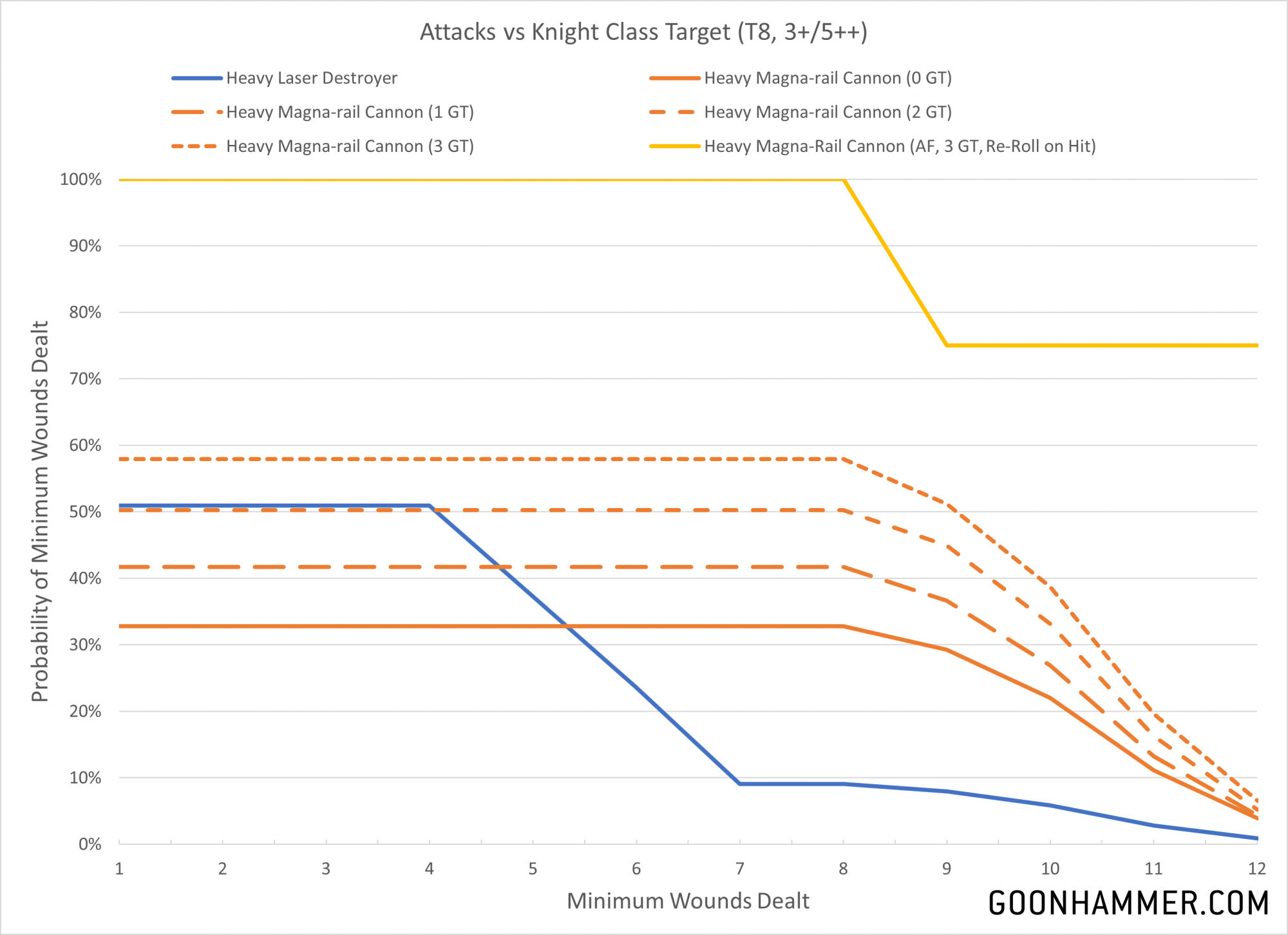 This book should not exist in its current state. It should never have been approved. Games Workshop knows exactly how effective auto-wound on hit abilities are, yet they gave them to an entire army and made it trivial to apply them. Worse yet they allowed that ability to synergize with other effects to produce agency-stripping combinations that guarantee damage. Having written about game balance and the impacts of various rules on Warhammer 40k for three years, these feel like some of the most degenerate mechanics Games Workshop has ever released.