Hammer of Math: The Impact of the Votann FAQs

This week’s Hammer of Math takes a look at the mathematical changes that come from the magna-rail Leagues of Votann Balance Update that Games Workshop released last Thursday.

Assuming this isn’t the first article you’ve ever read about Warhammer 40k (and if it is, welcome!), then you’re likely aware that the release of Codex: Leagues of Votann brought about a fair bit of controversy. From a mathematical standpoint some of the combinations simply broke the game in ways that we didn’t think were intended, and it appears that was the case. On Thursday GW released a hilarious and sincere response that made some immediate changes. You really should read the link below, it’s amazing:

I want to commend Games Workshop and the Warhammer Community team for their efforts here. Not only for the quality of the response (I’m eagerly awaiting Codex: Zoats featuring an army-wide 2+ invulnerable save), or the excellent application of Mozart’s Lacrimosa, but also for how quickly they made a change. I’ve played Games Workshop products on and off for nearly three decades, and the last few years have been defined by a level of openness and community engagement that the company has never done before. It definitely helps make the game more enjoyable to know that imbalances are temporary and that the company is prioritizing player enjoyment.

The Probability of Triggered Effects

From a mathematical perspective, extraneous abilities that trigger on an unmodified die roll are curious things. Remember that the core attack sequence is a series of independent die rolls that can be defined as a series of driving and gatekeeping rolls. The gatekeeping rolls (hit, wound, save, and ignore wounds) are simple pass/fail criteria. Abilities that trigger off of one of those rolls have a fixed chance of occurring with each sequence (whether the sequence is successful or not). In other words, if you have an ability that triggers on a six then one in six attacks will see that ability go off. Note that this trigger is on in six attack sequences, not one in six successes. If you only look at successes then the probability that a success will include the triggered effect is equal to the percentage of successful results on the triggering roll that initiate the effect. For example, if you are wounding on a 4+ and triggering on an unmodified 6 then the effect will occur on 1 in 3 successes. You can try this out for yourself using this AnyDice program; the effect of 2 damage will occur whenever the triggering value (T) occurs on the wound roll.

What made the original incarnation of Eye of the Ancestors so powerful is that an effect which was intended to occur relatively rarely now would occur on a hit roll of up to 4+. For example, let’s say a Hekaton Land Fortress was firing at a T8 target with a heavy magna-rail cannon resulting in a 3+ to hit, 3+ to wound, and no save. Without any Judgement tokens or re-rolls the chance of getting a successful wound was 44%, and the chance of the magna-rail’s damage transfer ability was 11%. With 3 Judgement tokens the probability of getting a successful wound would be 61% (a 38% increase over the original value), but the probability of triggering the magna-rail damage transfer would be 52% – a 380% increase!

In response, Games Workshop made a huge change. Attacks that automatically wound using Eye of the Ancestors no longer count as having an unmodified 6 to the wound roll.

The Impact of the FAQ 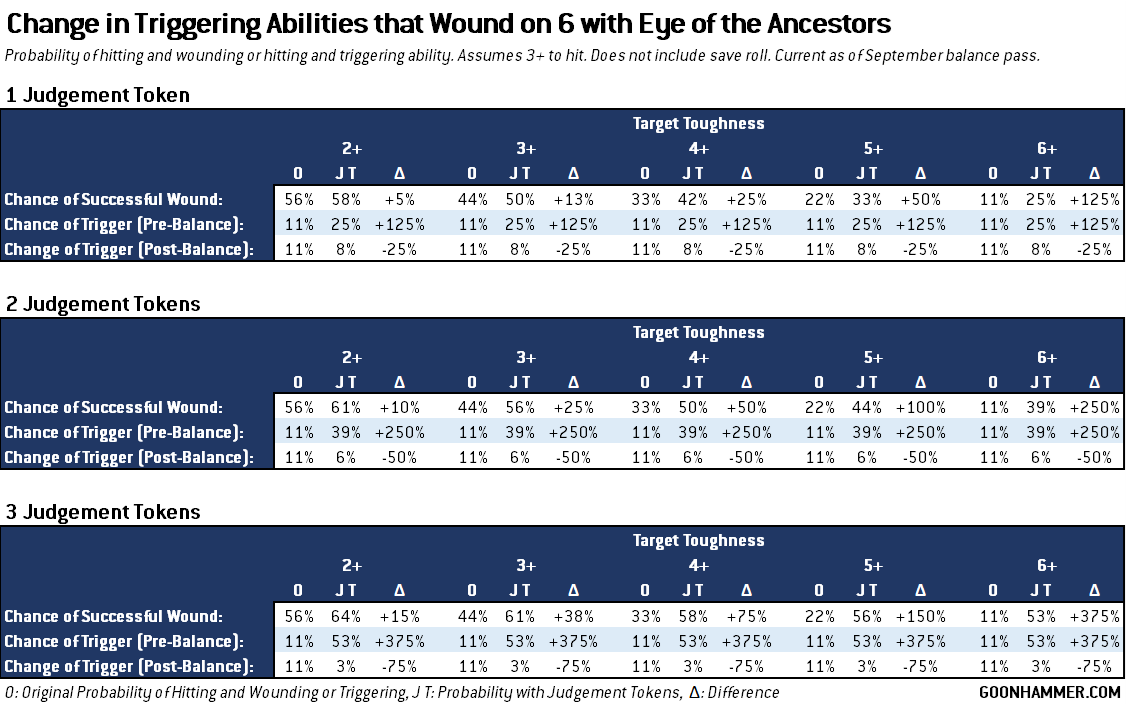 The results are pretty significant. A single Judgement token reduces the chance of triggering by 25%, two reduce it by 50%, and three by 75% relative to not having any Judgement tokens. Compared to the probability before the balance pass the reduction is as much as 94%.

Hypothetically Changing from 6 to Wound to 6 to Hit

One thing that interested us at Goonhammer was what would happen if the various effects triggered on an unmodified hit roll of 6 instead of an unmodified wound roll of 6. In this case the probability of triggering with at least one Judgement token would be a flat 17%, as the unmodified hit roll of 6 would also guarantee a wound. This is slightly higher than the 11% baseline probability achieved from a 3+ to hit and a 6 to wound, but is significantly less than the chances of triggering before the balance pass. If something like this was implemented then Ancestral Fortune would need to be changed so that it was considered a modified result instead of unmodified. It might be worth doing anyway, since the ability explicitly modifies the result. 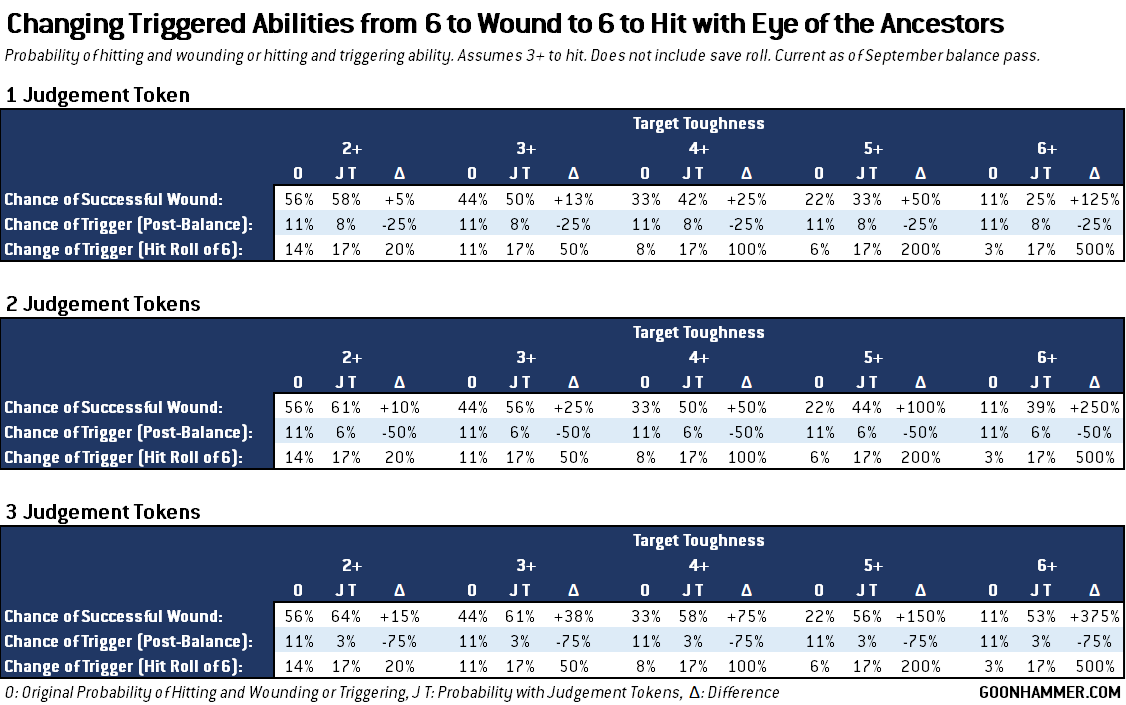 The fact that Games Workshop chose to make such a major change weeks after the book was released speaks to both the level of imbalance in Codex: Leagues of Votann and the level of commitment GW has towards ensuring Warhammer 40k is fun to play. The impact of this change, coupled with the significant increase in points some units have, makes this army much more palatable. Many players noted in our Competitive Roundtable that from a purely competitive standpoint Leagues of Votann would likely need to rely on lethality to combat the powerful secondaries of other top tier armies. This balance pass definitely hinders that, but readers should note that a Dataslate update for the other armies is expected soon and that might upend things entirely.