This week’s Hammer of Math returns to the Immaeterium to examine the probabilities behind the various Psychic disciplines available in Codex: Chaos Daemons for Warhammer 40k.

With the notable exception of the Blood God, psychic powers are a major element of any Chaos force. Whether the effect be waves of mind-melting pestilence, mind-numbing allure, or mind-shattering warping of reality, it’s generally going to be an impressive and useful effect. There are four Psychic disciplines provided in Codex: Chaos. One discipline is dedicated to Tzeentch, Slaanesh, and Nurgle respectively, while the fourth is a discipline available to Disciples of Be’lakor. 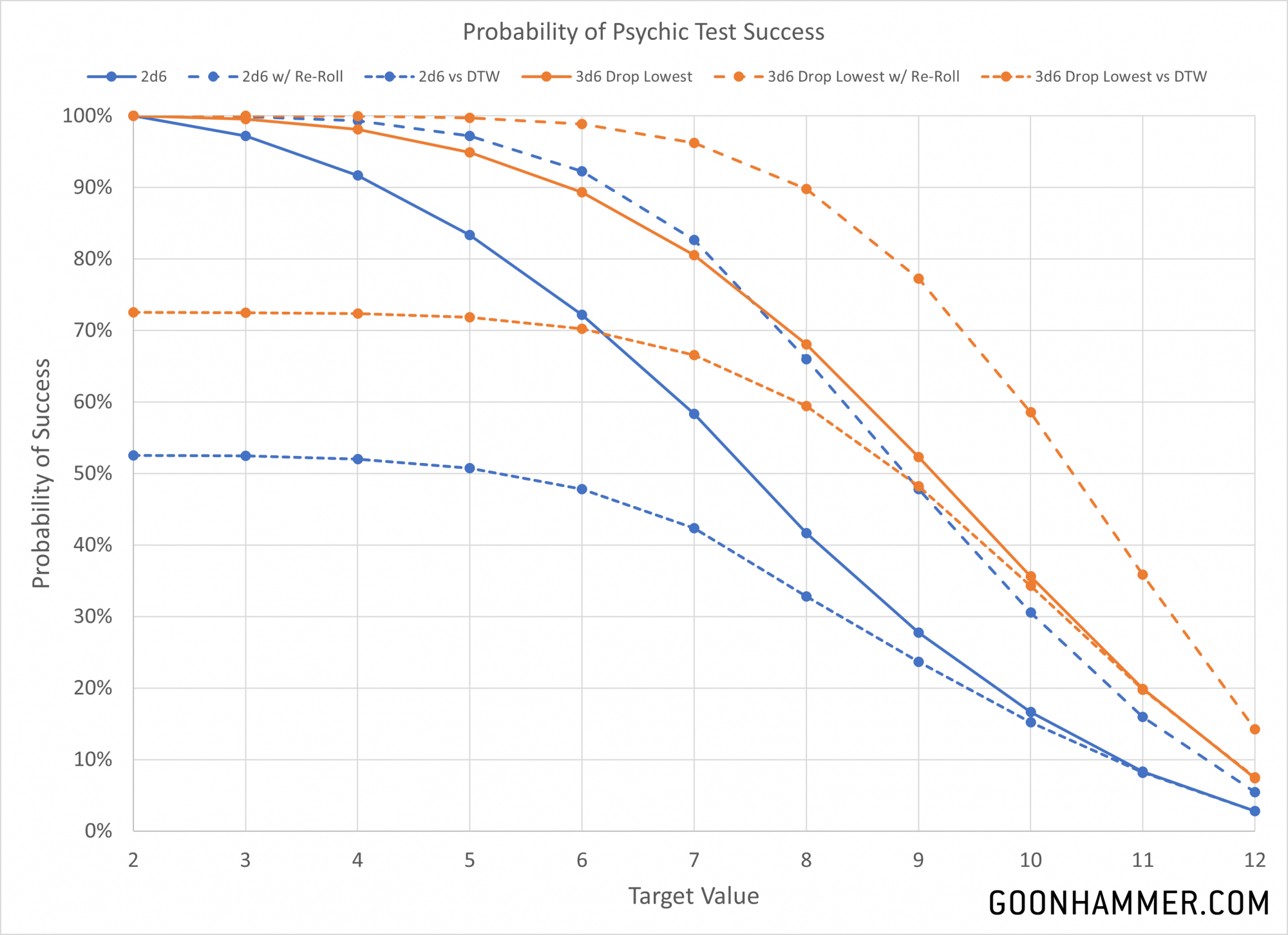 As one might expect, Tzeentch has access quite a few ways to manifest Psychic powers. Tzeentch detachments can access the Sorcerous Winds warp storm effect for 3 WSP, adding 1 to all Psychic tests for that phase. There are several other options for adding to Psychic tests, such as the Boon of Sorcery warlord trait (+1 to Psychic tests), having the Master of Magicks ability as a Lord of Change (+1 or +2 to tests depending on how many wounds the model has), or just being Kairos Fateweaver and getting a bonus equal to the battle round number. You can also skip the test entirely with The Blue Scribes and Xirat’p’s Sorcerous Barrage. That ability has you roll 2d6 and select one result; that power is automatically manifested. With 2d6 you have a roughly 31% chance of getting a desired result.

The Tzeentch discipline is the Pandaemoniac discipline, and consists of the traditional 6 options. The majority of these powers are straightforward, such as Boon of Change (WC 6) allowing you to roll 1d3 to get an effect off the chart or being able to choose the effect if the Psychic test was 9 or higher. The most interesting from a math standpoint is Bolt of Change (WC 7), which has two effects. First, you roll 9d6 and for every 5+ you force the enemy unit to suffer 1 mortal wound. Every model destroyed as a result of those mortal wounds inflicts an additional mortal wound to a maximum of 3, and those additional mortal wounds cannot generate further mortal wounds. 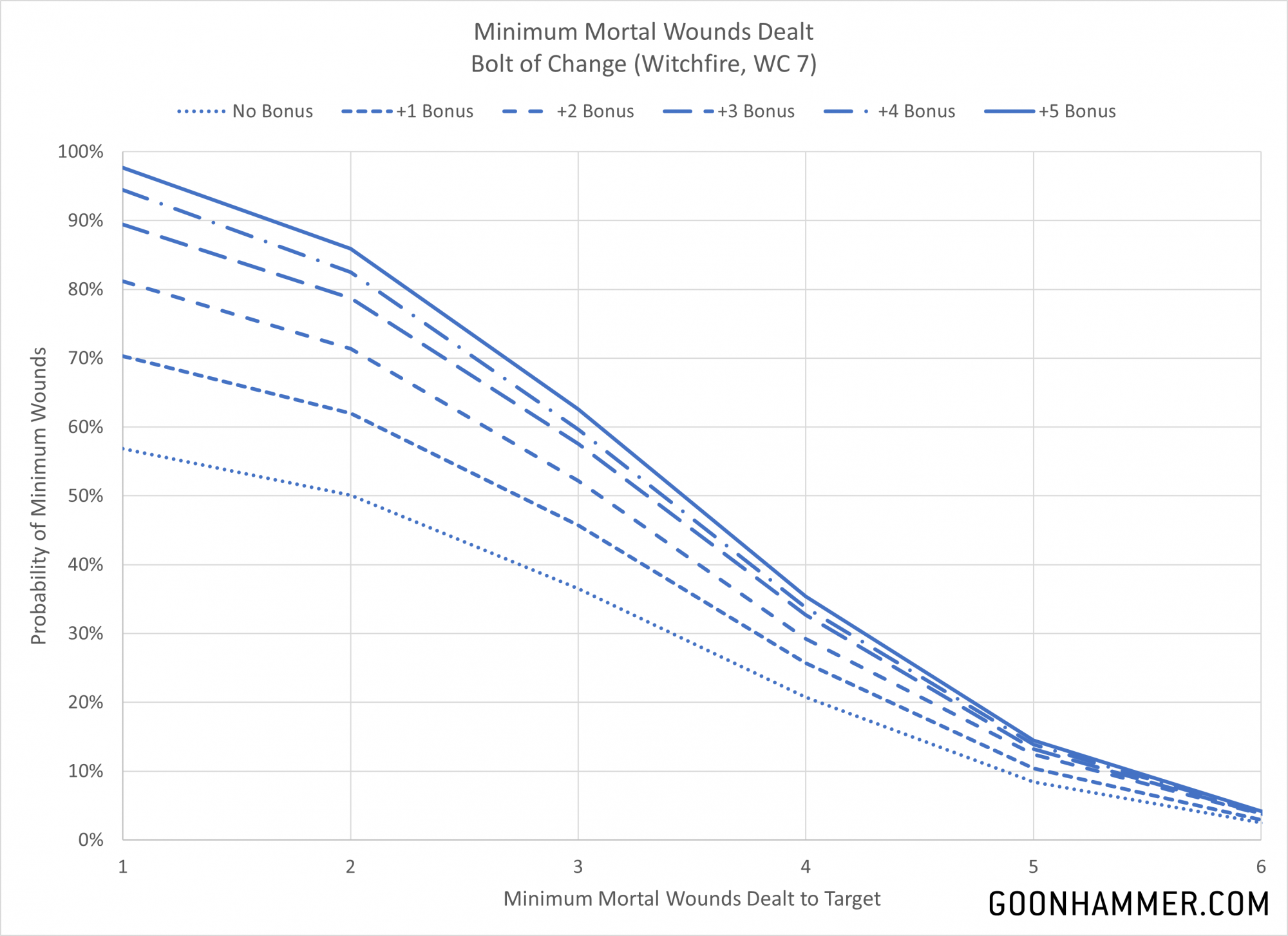 With a WC of 7 this is one of those powers which you’re going to want a bonus to reliably get off, and to be honest even if you do there’s no guarantee it will do much. Assuming at least a +2 bonus the average mortal wounds inflicted is between 3 and 4, and the bonus wound effect is entirely dependent on the Wounds characteristic of the target. This makes this power highly subjective and hard to apply.

Nurgle followers get to play with the appropriately named Warprot discipline. Unfortunately Nurgle units do not have access to any ways to improve their Psychic tests beyond a Command Re-roll. This is a challenge because all of the powers are fairly hard to manifest, with warp charges of 6 or 7 . The only power which isn’t particularly straightforward is Nurgle’s Rot (WC 7), which has you roll 2d6 against every enemy unit within 6″ of the psyker. If the result beats the highest Toughness characteristic of the unit then you inflict 1d3 mortal wounds. If it’s at least double the Toughness characteristic then it inflicts D6 mortal wounds. Naturally this means that the power is best manifested when the psyker is in the thick of the enemy, which generally suits Nurgle daemons just fine. 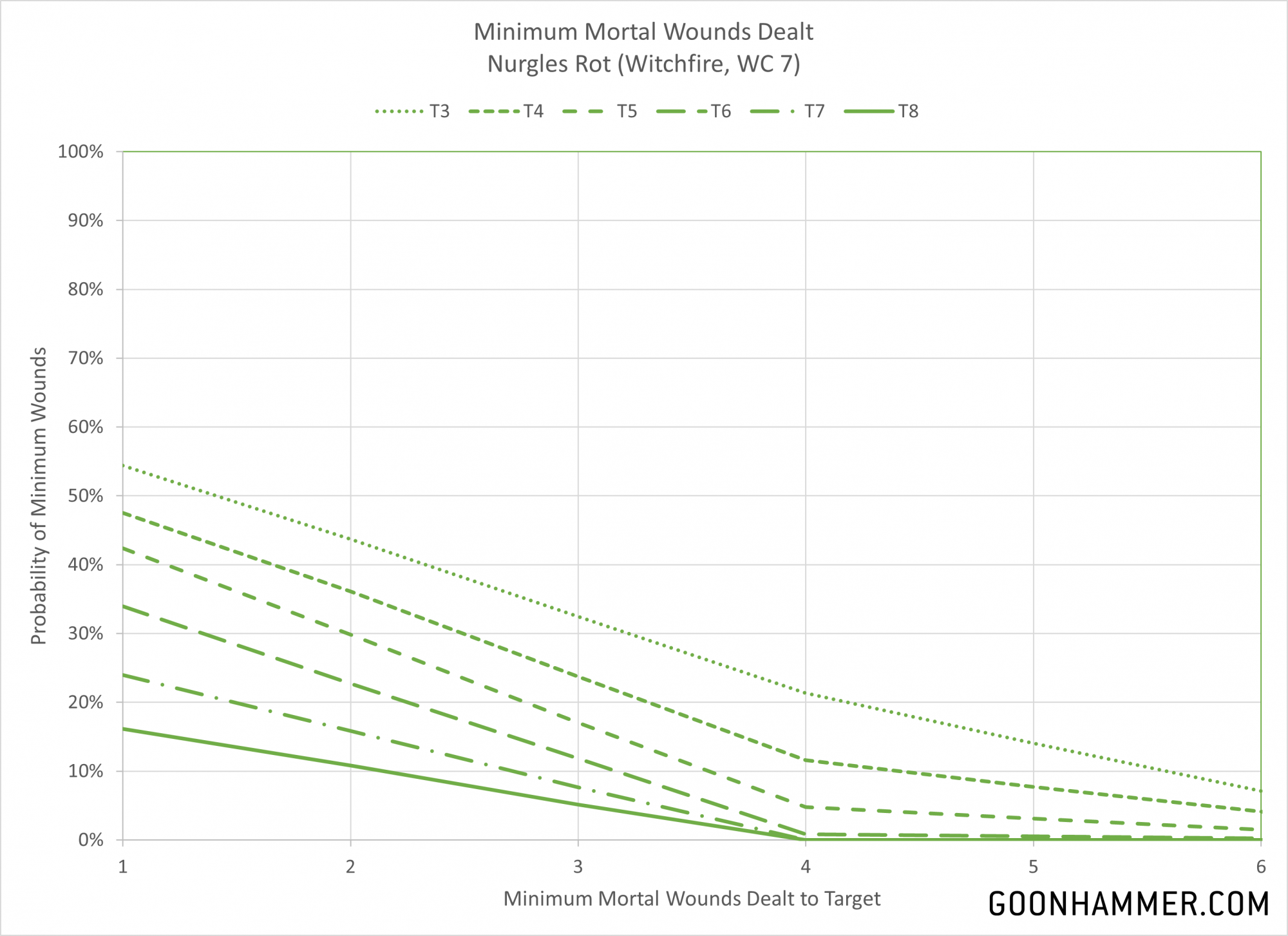 This power is largely garbage due to the combination of high warp charge, variable nature of the power, and random output of the 1d3 or 1d6. Obviously the result will increase significantly in the presence of multiple targets, particularly if those targets are T3 or T4, but the 58% chance of success to start with makes it a difficult choice. This is another example of a highly situation power which isn’t really reliable enough to count on.

Slaanesh provides its followers with the Soulstain discipline. As with Nurgle the powers are all WC 6 and WC 7, and just like their more pustulent compatriots there are no ways to improve Psychic tests. This means that even though there are a lot of really fun abilities, like Phantasmagoria (WC 7) reducing Ld every time the target unit suffers a mortal wound from a psychic power and Cacophonic Choir (WC 7) then testing against Ld to inflict mortal wounds, the high warp charge makes this extremely unlikely. Cacophonic Choir serves as a good example. Assuming you get past the warp charge of 7, you roll 3d6 and compare that to the target’s Leadership characteristic. Every point that the dice roll exceeds the characteristic is a mortal wound, with a cap of six. 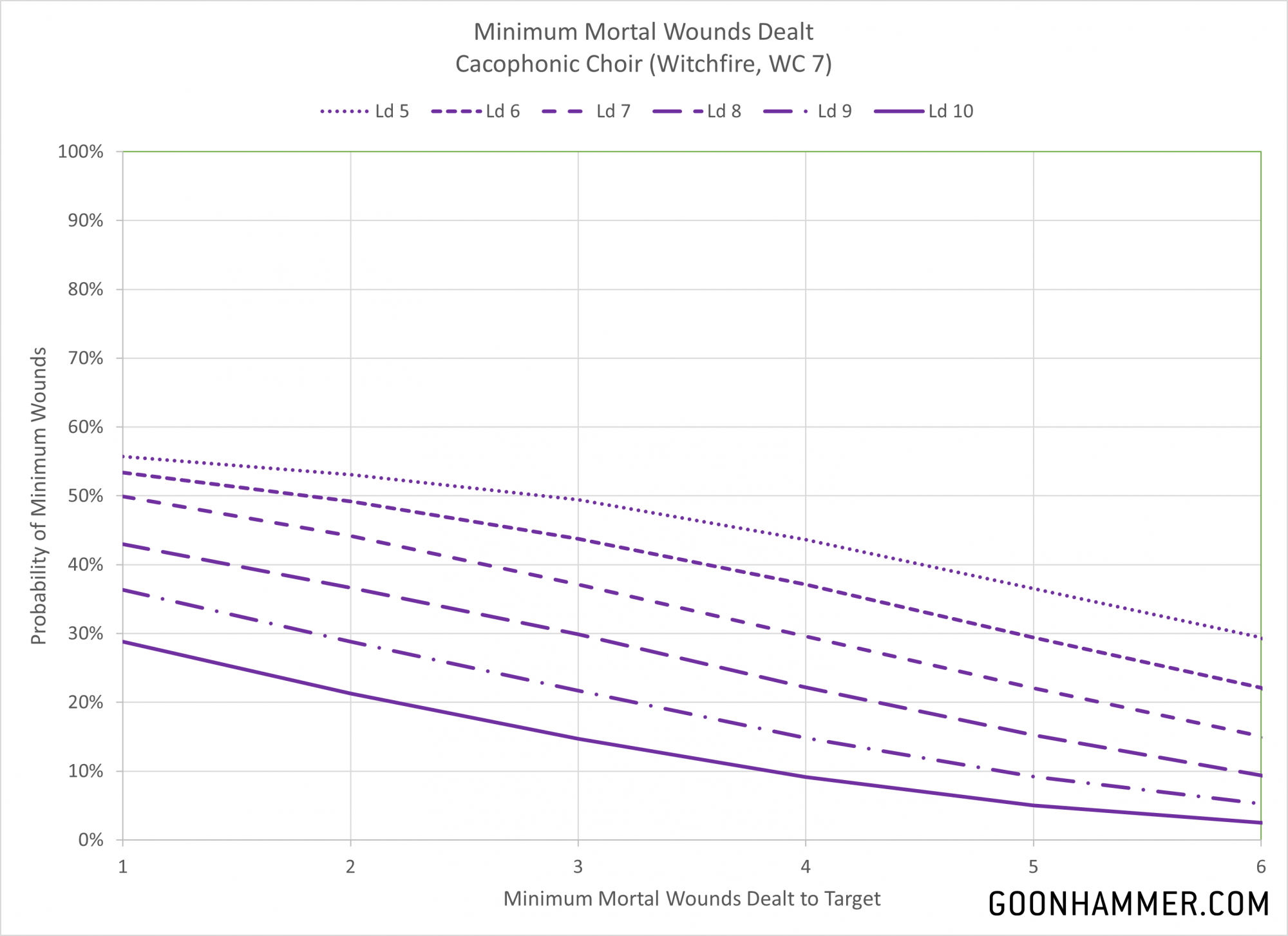 Ideally you could establish some kind of synergistic effect with the other Chaos gods, wearing down the target’s wounds and Leadership with a barrage of psychic energy before Cacophonic Choir performs a killing blow. Instead you’ll do nothing 42% of the time because your warp-spawned nightmare that has worshipped the Chaos gods for millenia can’t roll a 7 or better on 2d6.

Ever the overachiever, Be’lakor comes with the Noctic discipline. Appropriately shadow-themed, the powers are largely the same as what was covered from his previous release. Should a player want to leverage these powers (which are mostly WC 6 and WC 7, with Voidslivers at WC 5 to inflict mortal wounds) then combining Be’lakor with a Tzeentch detachment for the boosted Psychic tests might make the most sense. Not to mention that Be’lakor on his own is pretty damn terrifying.

The psychic powers available in Codex: Chaos Daemons are thematic, fun, and utterly unreliable unless you are using Tzeentch daemons. With Sorcerous Winds only costing 3 WSP and providing a +1 bonus, along with all of the other options such as the hilarity that is Kairos Fateweaver, they can overcome the high warp charge of their discipline and reliably manifest powers. Combining the psychic might of Tzeentch with the shadowy powers of the Noctic discipline would certainly be an option, but that still leaves Nurgle and Slaanesh without much luck.