This week’s article continues our look at Dedicated Transports from last week, focusing on the xenos options available.

We continue to see transports get fielded as key parts of winning lists, and as more events continue to responsibly open we’re excited to see what innovations head to the forefront of the game. It’s becoming clear that being able to take and hold objectives is a key to victory, and even with the reduced board size the need for mobility is still paramount. Having looked at many of the options available to Imperium and Chaos forces last week, this week we open things up to the xenos players.

The Wave Serpent has the Toughness characteristic of a Rhino with additional wounds and the ability to reduce all incoming damage by 1 via the Serpent Shield ability. They can be even harder to take down when they are equipped with Spirit Stones that allow the unit to ignore wounds on a 6+. This makes them extremely tough; at 160 points with Soul Stones they’re more survivable than an Impulsor thanks to the combination of damage reduction and additional wounds. 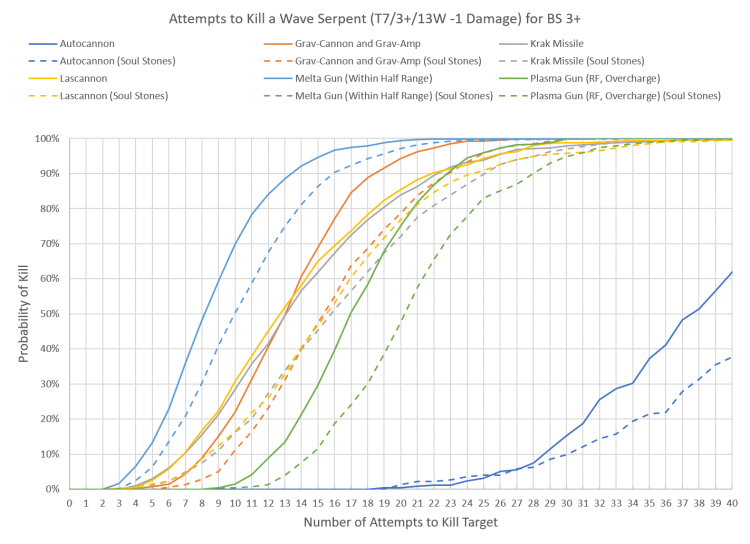 The nastier, spikier cousins to the Aeldari run around in Raiders and Venoms. Where the Craftworld get a combination of toughness and resiliency, the Drukhari fly delicate but brutally fast vehicles that have to rely on a 5+ invulnerable save to survive. What’s interesting is that while the Toughness characteristic is not as high as other vehicles, T5 is still enough to force a 3+ on most anti-tank guns. The 5+ invulnerable save also provides the equivalent of 50% more wounds when compared to a completely unprotected vehicle such as a Repulsor getting hit by a melta blast. As a result the Raider and the Venom prove to be surprisingly resilient. 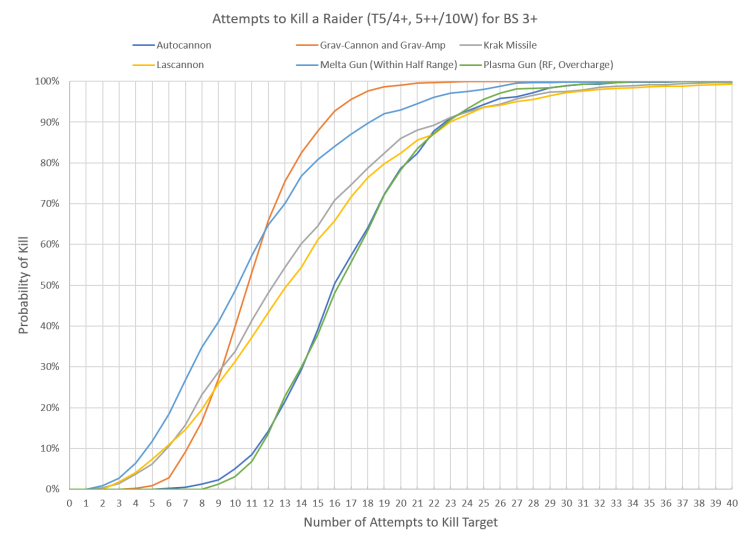 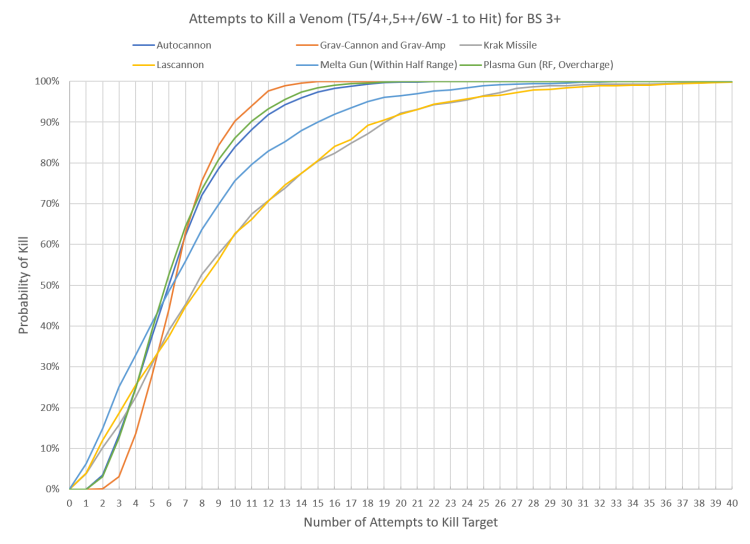 The Harlequin Dedicated Transport is the Starweaver, and as is well established by now it comes with a myriad of unpleasant tricks which make the combination of T5 and only 6W tougher than it looks. While a lucky shot can take it out in one hit (and 5% of the time a half-range melta shot will do just that), the majority of the time the presence of the 4+ invulnerable save and the -1 to hit penalty means that you need at least 8 shots to take one out. Considering that the Rhino is generally able to be killed by a single Eradicator squad this makes the Starweaver a very intriguing option for racing up the field and capturing objectives. Not bad for 80 points. 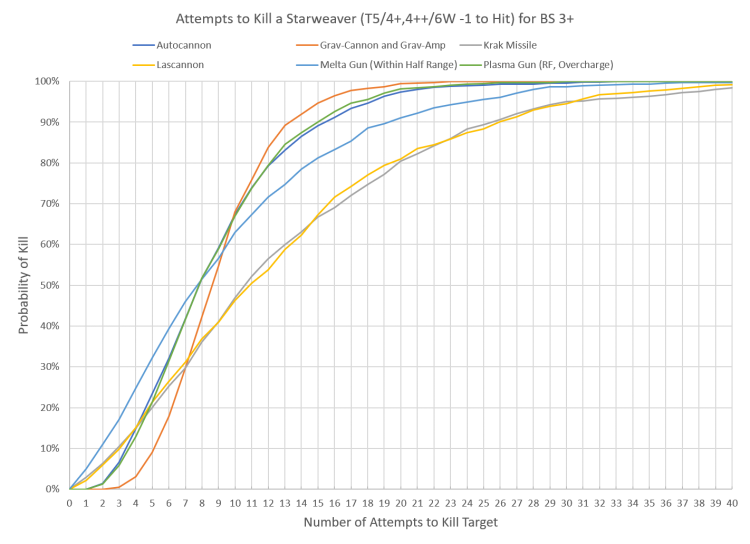 So here’s the crazy thing; outside of S7 autocannons the Goliath Truck is actually harder to kill than the Chimera. This is due to three important factors. First, the difference between T6 and T7 is irrelevant for anything S8 or higher. Second, for a significant number of threats the difference between a 4+ and a 3+ save is also meaningless (and against Grav-Cannons the 4+ is actually better). Third, the Goliath’s ability to ignore wounds on a 6+ effectively gives it 20% more wounds which is a significant bonus. Given that the Chimera and the Goliath cost the same this is actually a viable option. 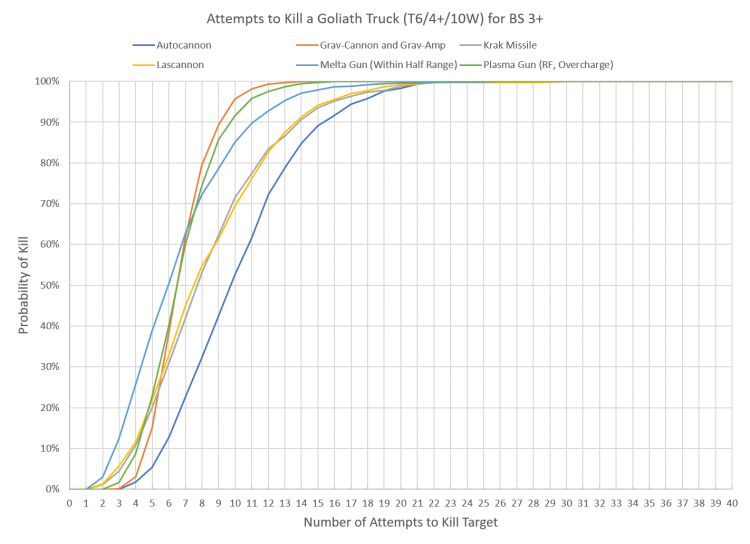 For a faction full of oddball technological advancements the Devilfish is a surprisingly simple vehicle, comparable to a Rhino with one more wound. Unfortunately this profile also means that this is not a particularly tough unit, and 103 point price makes it 25 points more expensive than its boxier Imperial counterpart. 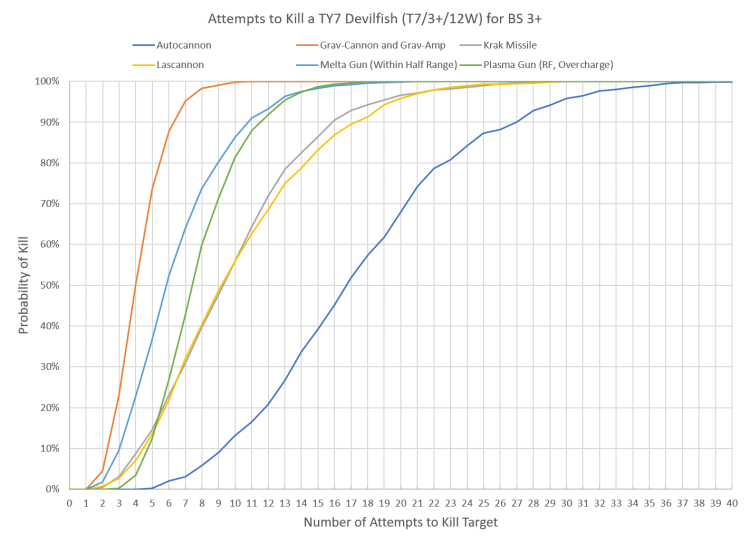 The Ork Trukk is the only non-Forgeworld Dedicated Transport that the Orks can bring. For 65 points you get a (literally) ramshackle buggy that’s fast, transports 12 boyz, and is actually fairly resilient for its cost. The Ramshackle rule is an interesting one that reduces the incoming damage of an attack to 1 on a roll of a 6+, basically providing another save. If the vehicle is Deathskulls then it also gets a 6+ invulnerable save which is shown below as the dashed lines. 5 melta shots may be enough to kill it, but you can actually bring two for the price of one Impulsor and have an equivalent level of resiliency. Given that each of those Trukks can be full of troops with ObSec, and that more often than not there will be shots wasted once the first Trukk is dead, this could be a viable option. 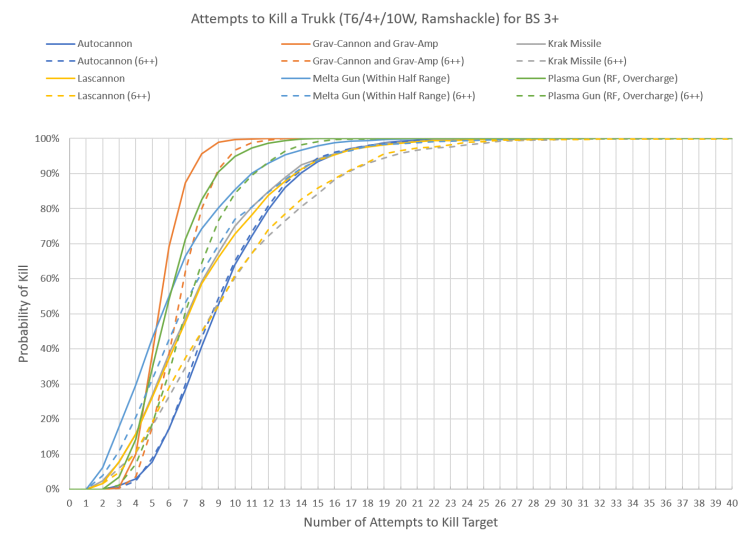 Although not technically a dedicated transport, Ork Battlewagons are cheap and I own two of them so you’re just going to have to deal with me writing about them. If the Trukk is the inexpensive option that can be thrown at the enemy and win through attrition, the Battlewagon is relatively overpriced but resilient option. At T7 and 16W it dies surprisingly fast, needing on average 8 half-range melta shots to the Trukk’s 5. If you add an ‘Ard Case it becomes T8 and reduces the effect of most weapons, and if a Big Mek with a Kustom Force Field is nearby you can also add a much needed 5++ for added protection. You could also consider adding the Forktress Kustom Job for a 3+ and a 5++, which will have the same profile for all of the dashed lines except for the autocannon. Depending on the attack these factors can increase the number of attacks needed by 25% to 50%. That said for the 135 point price I might prefer to take more Trukks. 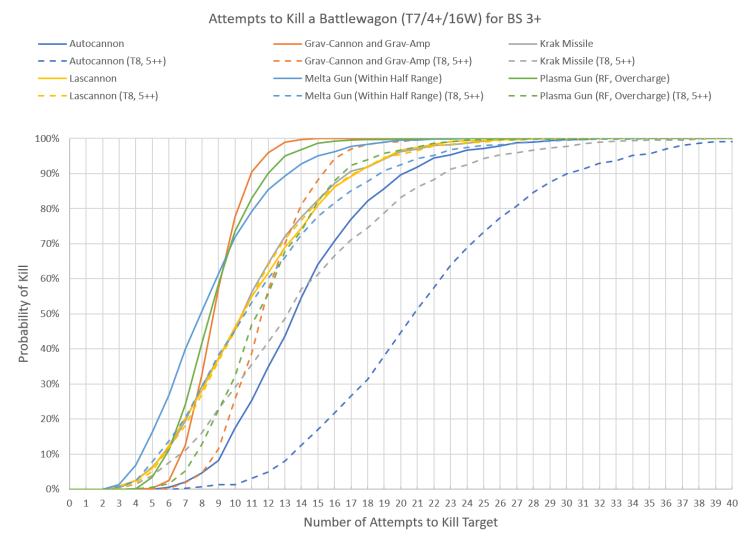 The Ghost Ark is an interesting option for the Necrons, as the presence of Quantum Shielding means that the more damage an attack inflicts on the unit the more likely it is to be ignored. Note that the chart below uses the legacy option for meltas at half range (roll 2d6 and pick the highest). The effect utterly and completely neuters meltas, lascannons, and krak missiles while grav-cannons and plasma guns are relatively unscathed. At 140 points these units are harder for a traditional anti-tank weapon to kill than a Repulsor. Given the prevalence of Eradicators in Space Marine forces (and assuming nothing changes in their new book) there is definitely a place for Ghost Arks in 9th Edition. Finally some redemption for all of those edges and fiddly bits. 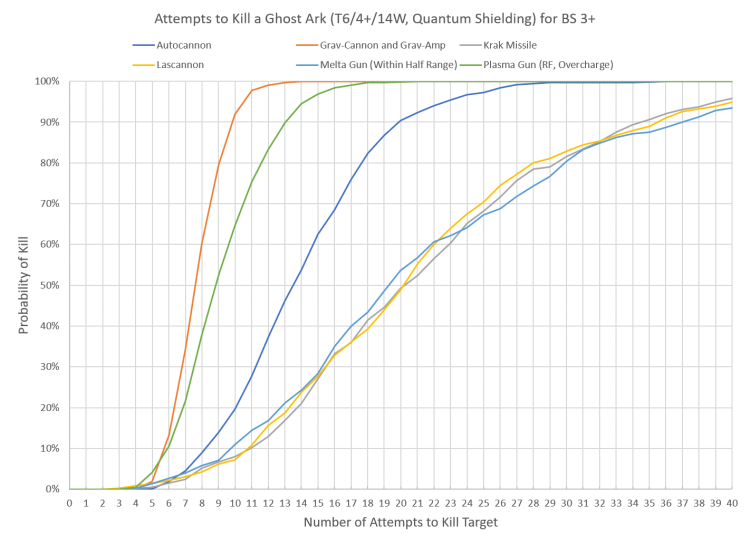 Yes, Tyranids have a dedicated transport. The Tyrannocyte is a bit of an odd beast since it’s a drop-pod, but it can carry a lot of guns and also deploy anything up to and including a Tyrannofex. At T6 and 12W with a 4+ it’s vulnerable to a wide variety of threats which makes the price point of 95 points difficult (but not impossible) given that it also carries a fairly healthy number of guns. In terms of resiliency the Tyrannocyte is roughly on par with the Ork Trukk thanks to the extra wounds. As part of a monster-heavy force designed to saturate your opponent with things to kill it could be viable as an objective sitter. 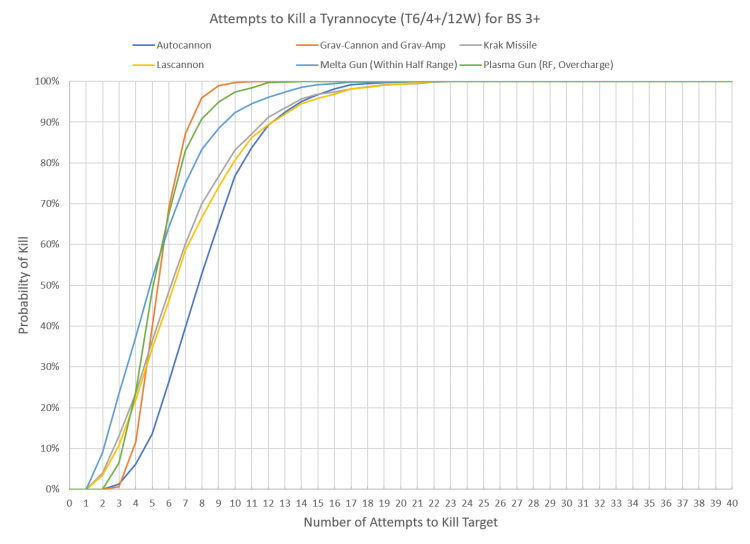 The requirements for winning in 9th Edition make what was previously a largely ignored subset of units a high priority. The combination of mobility, resiliency, and the option to dump a large number of models with ObSec around key objectives make transports very appealing, and the xenos factions have more than a few viable options.