Hammer of Math: Xenos Purging and You

Last week we covered Harlequins and some of the options from their White Dwarf article and this week we’re going to apply the same treatment to the Deathwatch. While Deathwatch may not have received any unique content, the addition of the core Astartes Doctrines, Litanies, and Stratagems adds some interesting possibilities that’s worth taking a look at.

Although the fluff makes Deathwatch highly xenos-focused, in terms of gameplay this Astartes army has an immense level of flexibility thanks to a wide range of modifier Stratagems and their core abilities. Special Issue Ammunition gives players significant flexibility, with more range and armor penetration or a guaranteed 2+ to wound with Hellfire ammunition. Mission Tactics provide a flat 17% improvement to wounding against a predetermined Battlefield Role thanks to the option to re-roll wound results of 1, and with the Tome of the Ectoclades players can have even more flexibility and apply the effect to a second Role (and get the bonus to apply to everything, including VEHICLES). Deathwatch players also have access to a series of 2 CP Doctrine Stratagems which all add +1 to wound against a specific Battlefield Role, and have the benefit of also allowing units to use multiple Stratagems against different targets so long as the Role is different. What’s even more encouraging is that while all of this is highly CP intensive, we know that CP is something that’s being adjusted under 9th Edition. This flexibility is further enhanced with the new White Dwarf rules, which provides the Astartes Doctrine system and provide the universal Astartes Stratagems as well as the generic Chaplain Litanies. 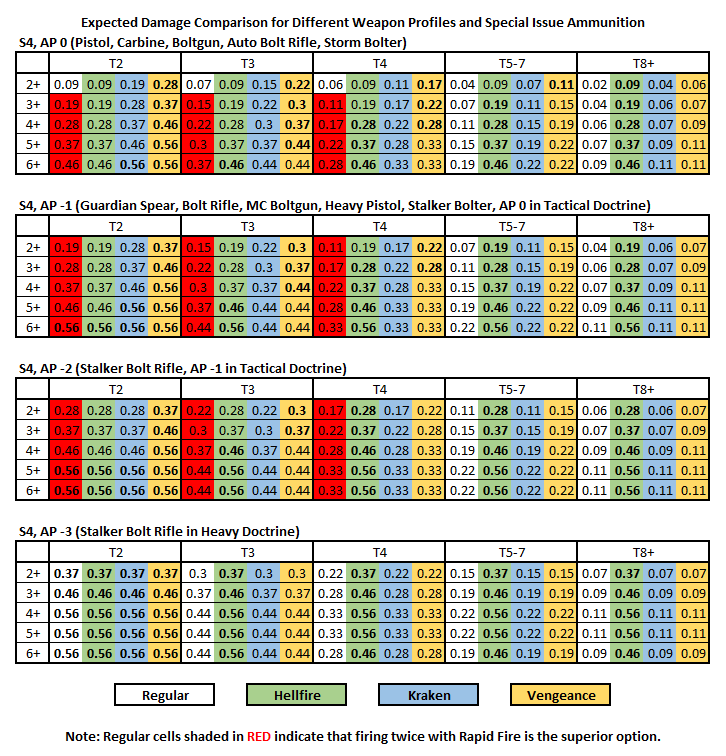 The chart above is from our Start Competing article, and it shows the expected wounds for a single shot against different targets assuming a single damage attack. This chart is helpful for determining what is the optimal weapon to use against a specific target; to use it you select the chart based on the AP of the weapon and then look up the Toughness and save of your target. The bolded option is the best one, and if there is a red cell then that means that the option to Rapid Fire with regular ammunition is better than a single shot using SIA if you’re outside of Rapid Fire range but have the option to use Bolter Discipline (which cannot be used with SIA). But what about when deciding what weapon to field? For small marines the choice is always the Storm Bolter since it fires twice as much. But what about the Intercessor options? Are there targets where it’s better to use the three shots of an auto bolt rifle, or the two damage hit of a stalker bolt rifle? To determine that we put together the expected value for the optimal weapon combination and multiplied it by the number of shots or damage. The chart below shows the result. 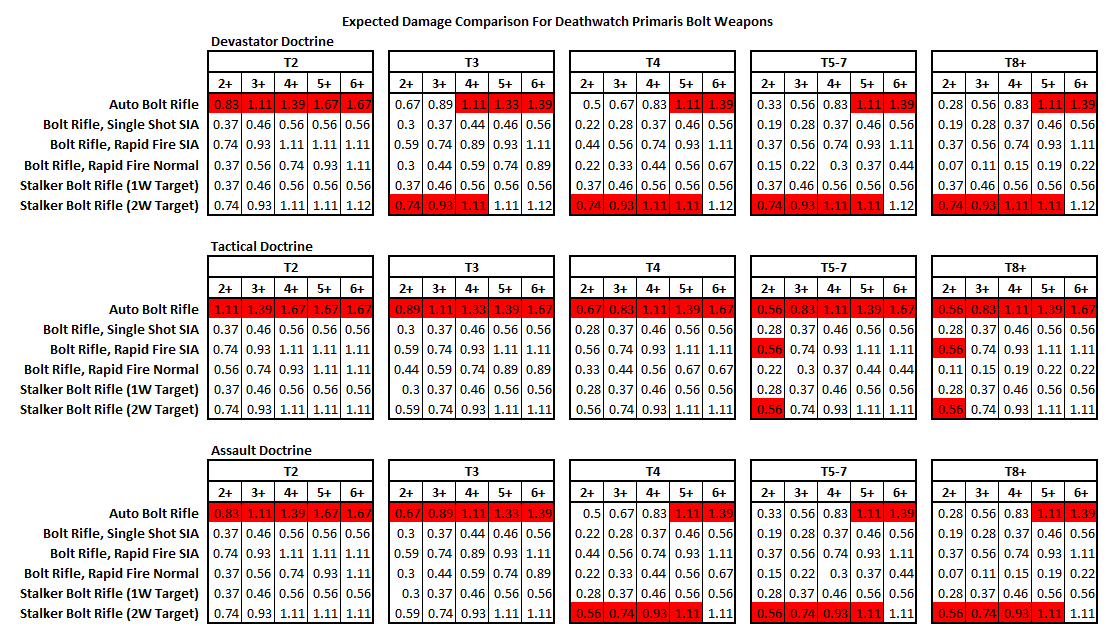 Each cell shows the expected value based on the optimal selection of SIA, and the cells shaded in red indicate the optimal weapon choice. First off we see that the bolt rifle is an inferior option for every possible scenario, as it’s either better to have double the damage or triple the number of shots. In nearly every situation the auto bolt rifle is the superior choice, with two exceptions:

There are a few caveats here. First, this analysis does not apply to VEHICLE targets where Hellfire ammunition does not work. Second, players may want to consider the benefits of the added range (and character targeting ability, see below) of the stalker bolt rifle when determining the best configuration for their forces. Intercessors equipped with stalker bolt rifles can serve as relatively inexpensive objective sitters and still reach out and threaten the enemy, as shown in the list Anthony D’Amore provided in our Start Competing article.

Until the addition of Chaplain Litanies and the Recitation of Focus Deathwatch armies did not have any access to hit roll modifiers. This made overcharging plasma a risky prospect. Thanks to the White Dwarf article this is no longer the case, and Deathwatch players have access to a brutal combination of Relics, Litanies, and Stratagems which enable them to drop a very nasty quantity of firepower nearly anywhere on the board. The combination uses a Watch Captain with the Beacon Angelis, a Chaplain with the Recitation of Focus, a unit of Inceptors (Hellblasters will also work but are less effective), and optionally a second Chaplain with the Catechism of Fire.

Maxed out with 6 Inceptors this provides 12d3 S8, AP-3 (AP -4 in the Tactical Doctrine), D2 shots that hit on a 2+, have +2 to wound, and re-roll 1s for both hitting and wounding. Before saves or Feel No Pain that’s 46 expected wounds against anything T8 or below. For a 10-man Hellblaster squad with plasma incinerators it’s 38 expected wounds since they only produce 20 shots. While the optimal approach would use this on a 6-man Inceptor Squad, Fortis Kill Teams can allow a significant improvement in survivability by combining a 5 Inceptors with 5 Intercessors to provide 10 T5 ablative wounds. Let’s take a look at the damage dealt against a representative target, using a Knight since it represents a pretty decent balance of toughness, save, and wounds. If there’s something else you’d like to run the analysis against, I put together an AnyDice Program that also includes the options for re-rolls. You can also check out Uily’s Warhammer Stats Engine for calculations with a fixed number of shots. 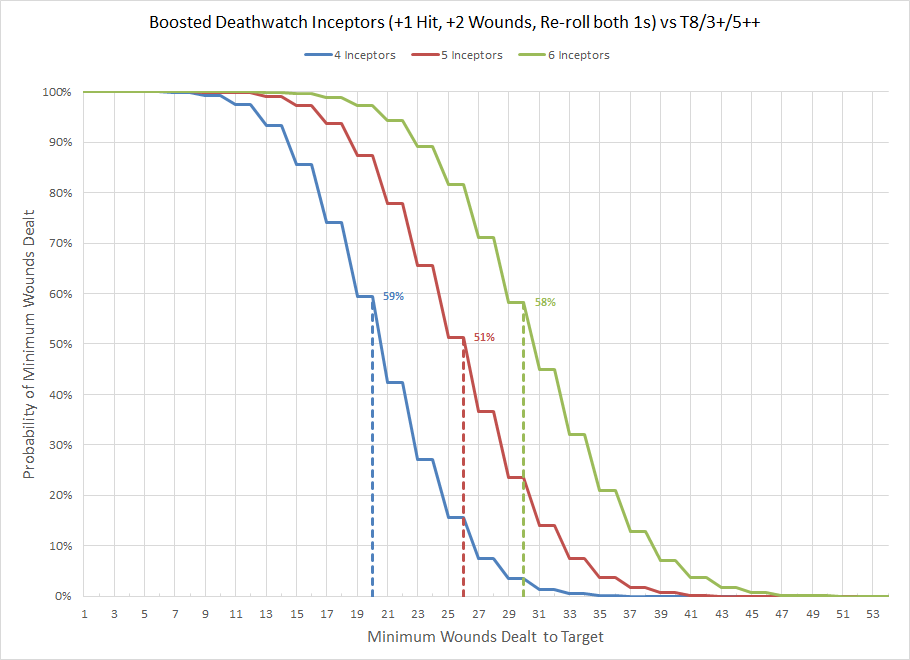 While not as blatantly abusive as a fully tooled Smashwolf Wolfsmash the 2nd, being able to drop 5 Inceptors with a 66% chance of killing a Knight in one turn is pretty amazing. Without the second +1 wound bonus from the Cathechism of Fire you’ll need 6 Inceptors to have a better than even chance of killing the Knight. For what it’s worth there’s a pretty good chance that  with a 5 man Inceptor squad in a Fortis Kill Team the 15 assault bolt rifle shots with the same bonus will get an extra wound or two, and if necessary you can also use the Tempest Shells (1 CP) Stratagem to deal an additional 1d3 mortal wounds if a single shot hits. A 5-man Inceptor unit will also deal enough firepower to kill an average of 16 Primaris marines (19 under the Tactical Doctrine with the AP bonus), or wipe out a six man Centurion squad regardless of which turn it is.

Every Astartes faction now has access to the Target Sighted (3 CP) Stratagem which allows stalker bolt rifles to target character and get an extra mortal wound on a modified wound roll of 6+, but not many factions have access to the ranged wound modifications that can significantly increase the number of mortal wounds applied. Depending on target the combination of Target Sighted, Purgatus Doctrine (2 CP) to add +1 to wounding HQs, and either Mission Tactics or Decapitation Doctrine (2 CP) to re-roll 1s or all failed wound rolls can provide a significant threat. For the chart below we’re assuming the use of Target Sighted, Purgatus Doctrine, and that both hit and wound rolls include a re-roll 1 bubble through the presence of a Captain and Mission Tactics. This can be made even more effective by adding a Chaplain with Recitation of Focus or using the re-roll bubble of a Watch Master. 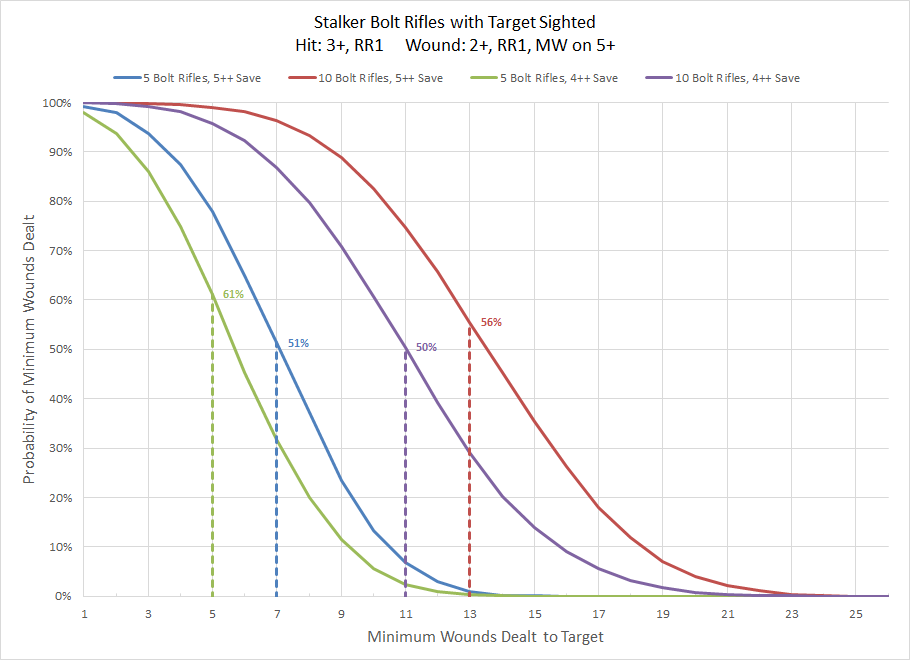 With the proper support, 5 stalker bolt rifles can reliably kill 5-wound characters with even a 4++ save thanks to the combination of reliable wounding and adding mortal wounds on a 5+. Replace the supporting Captain with a Watch Master and 5 stalker bolters have a better than even chance of killing even a 6 wound Primaris character. It might be worth fielding a 10 man squad of Stalker Bolters to make better use of the 5 CP investment and target multiple characters. The unit could be later split using Tactical Flexibility (1 CP) to sit on multiple objectives if needed.

Although Psychic Awakening may not have provided the boost that many Deathwatch players had hoped for, there is quite a lot to enjoy. Deathwatch’s unique Stratagems and flexibility make them a very dynamic and interesting force and the addition of the core Astartes rules only makes them better. We’ve seen how the combination of Doctrines and Special Issue Ammunition have made certain weapon choices extremely powerful, how a properly supported Inceptor squad can take out nearly anything with impunity, and now the updated content makes stalker bolters particularly lethal against characters. The major downside is that all of these combinations are extremely CP intensive, but with 9th edition around the corner we may see that change as well. Pete Foley commented that 9th edition will see “less soup and more super soldiers,” and if that doesn’t sound like Deathwatch then I don’t know what does.