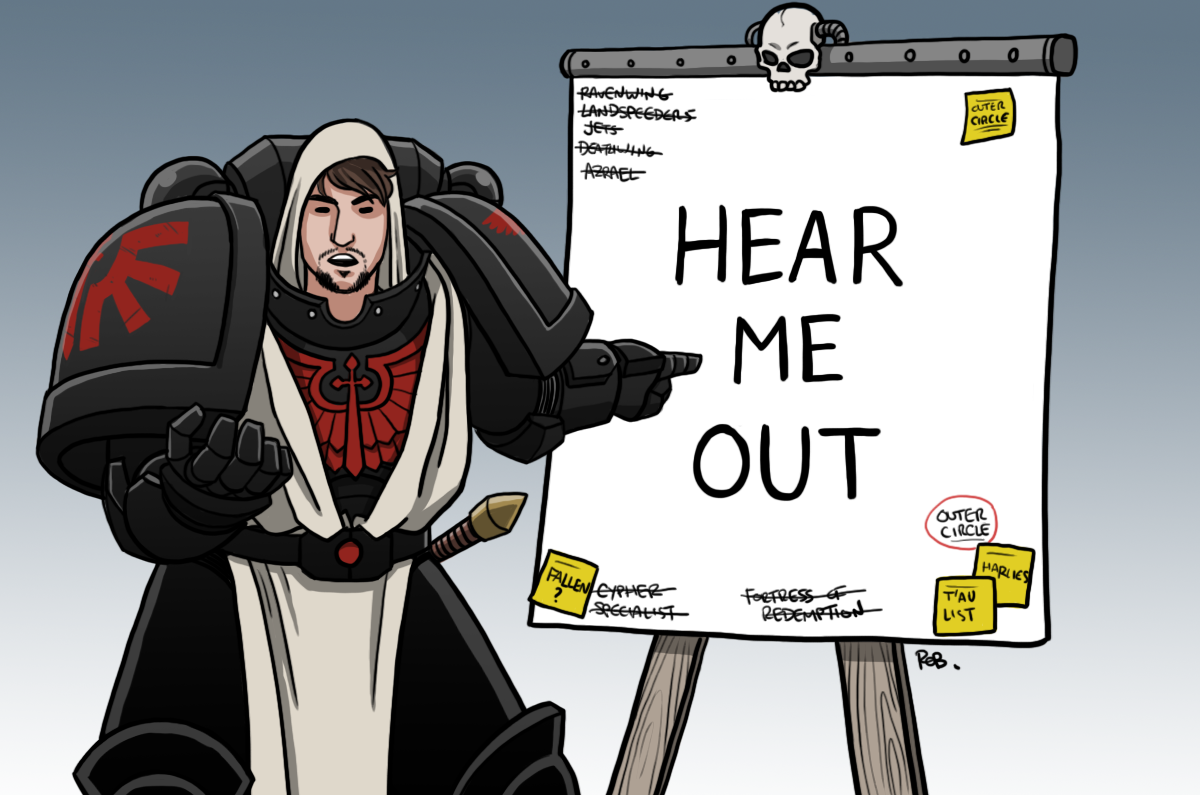 Hello dear readers, Gunum here bringing you a new column that has been demanded multiple times, often secretly and typically in hushed whispers, ever since we started doing all of our different list analyses here at Goonhammer. In this new regular series I’m taking a bit of a departure from building and testing my typical “Hear Me Out” lists to instead Hear You Out. Each week (or so), I’ll be covering lists that you – yes you, the readers! – send into Goonhammer for us to review, comment, improve, or just dish out some piping-hot takes fresh out of the oven about. As list creation is kind of my entire bag for playing this game in the first place, I took it upon myself (as well as my normal rotating door of guest speakers), to go through our never-ending mail-bag and pull out a list or two that I would like to take a deep dive on and help answer your burning questions!

Condit: I’ll be adding some notes here as well, serving as Gunum’s foil in this first episode. As I am very bad at 40k, this will be a bit like a Goofus and Gallant bit, only where Gallant is a coked-up madman. 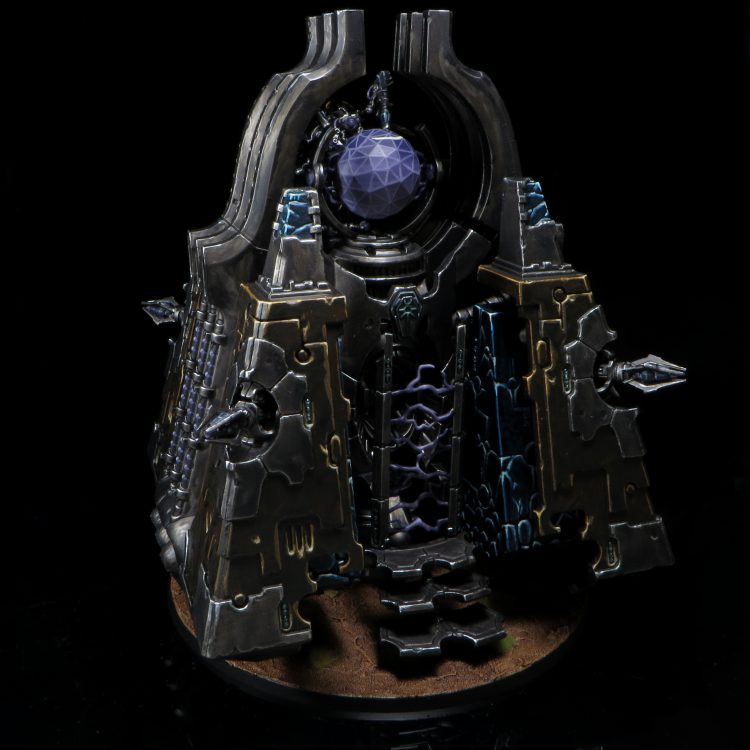 This week, I’ll be looking at a list sent in by our reader Tyson and his take on some real Hear-Me-Out-energy Necrons:

I’m just getting back into 40k after a very long hiatus (just over 10 years I think). I played Nids back in the day briefly. I wanted to get into Necrons but they had only a couple of models and virtually no rules. Now I dove in hard into collecting Necrons (probably close to 4000 points or so) and played a smaller couple of games(750 pts and one standard 2000). Registered for my first tournament in November too!

I’m going to run an ultra fringe list. A wild card list that absolutely no one will expect. 2000 points with a super heavy detachment with 3 titanic LoW for -6CP but I get +2 CP refunded due to the 2021 grand tournament book update.

The star of the list will be a Tesseract Vault and 2 monoliths. Probably one with 4 death rays and one standard 4 gauss Arcs.

HQ: Warlord Technomancer with a cloak to fly and heal, with the Veil of Darkness and Enduring Will trait.

Before we even start diving into this too much, can I just point out how awesome this list would look on the table, not even taking into consideration its sheer killing power? Tomb Sentinels are one of the coolest models in the Necron range, mixed in with the new Monoliths and a full of Tesseract Vaults? Sick.

Though uh, that deployment on The Scouring might be a tiny bit tight.

I’d give this list a B for trying to use things we don’t normally see, as well as a very strong table presence, with the majority of its units being very scary but very susceptible to armies with a powerful anti-anti tank.

Condit: I absolutely adore the commitment to the bit, and this is going to pick up at least one win just off of finding someone who’s stunned into utter silence for the entirety of the round.

That someone is one-hundred percent going to be me, by the way. After all, how often do you see one monolith these days, let alone two? 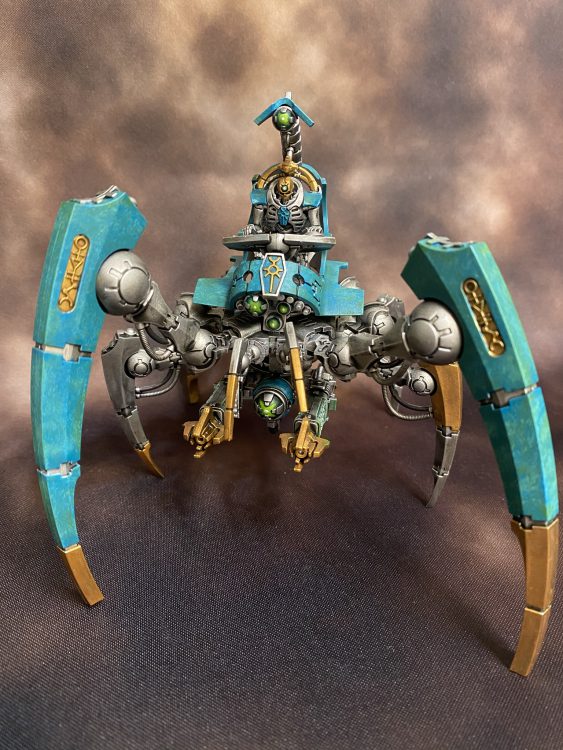 Alright, now that we’ve all got a good eyeful of his sick list. Let’s see what he plans on doing with it:

I’ll be running the Eternal Expansionist custom dynasty. Secondaries are likely Stranglehold, To the Last, and Ancient Machineries.

The plan is this. Pre-game move and advance to both objectives on two corners away from me. Scarabs and Veil do this. This is to get points for stranglehold turn one and set up my monoliths. Turn two, deep strike the monoliths and possibly the tomb sentinel. Kill anything that can hurt my monoliths asap and hold objectives with ob-sec. Triarch stalker moves up hopefully lights up something like Core Troops or dangerous targets with meltas and gives out his buff. The Tesseract vault camps the home objective with 3 ctan powers, 4++ and 30 wounds. Spyder and Technomancer heal monoliths mostly (one closest to the enemy and utilizes look out sir), but maybe Triarch stalker, sentinel, spyder as other heal options.

Okay, not a bad plan at all from my experience. Whenever I build a list for competitive games of 40k, I like to take three basic principles or questions for consideration into my lists and make sure we can check those off before moving on to other thoughts. Essentially, we want each list we build to have at least one of each of these following unit roles:

Let’s look at his list and his plan, and see if it matches my basic ideas:

Condit: One thing to be wary of here is the overlap between the units in the “Ours” and “Yours” categories – you’re relying on the deep-striking monoliths not only for killing power, but also to hold onto objectives. Once they hit the table, they’re going to pose some interesting questions, but the huge footprint of the model means that your opponent’s screening is that much more effective. Just hope they’re not bringing Infiltrators.

Gunum: For the plan here, I’d feel like a B or a C grade would be accurate. Hitting my MOY plan right on the nose is a great start, cause it means we are able to play the game and score some points. The issue with bringing big stompy machines of death is that we need them on the table being doom machines! Having almost a 1/3 of your list points off the table not shooting those death rays feels like a bit of miss, whereas starting all of them on the table and marching up could be very useful, depending on the matchup.

Condit: Another thing to keep in mind here is that Monoliths in particular are absurdly easy to screen, and the Tomb Sentinel, while somewhat smaller, is still large enough to be a pain to find the space on the board. You’ll need to focus on making some space for the Monoliths to come down if you want to be able to make this plan work.

If it does, though: Hoo boy is your opponent in for a wild ride. If they can’t deal some serious damage round 1, those Monoliths are going to drop down and start doing work. You’ve got a high-risk/high-reward strategy here, and let me tell you: I am here for it. 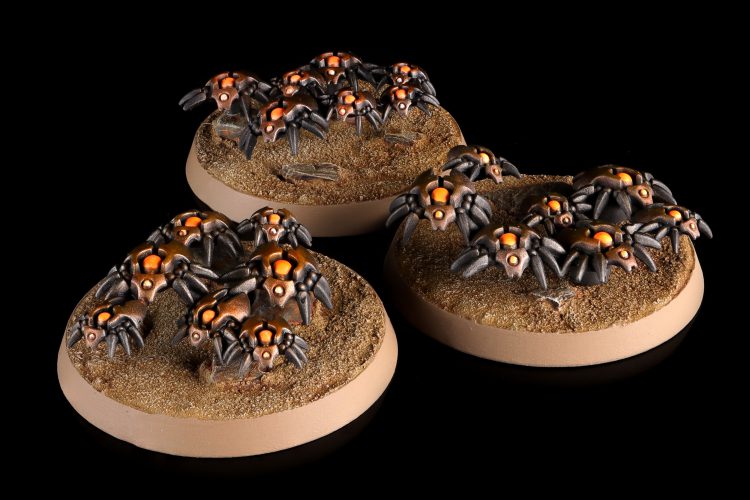 Now that we’ve seen the game plan here, using Ancient Machinery,  To the Last, and Stranglehold to try and win games, and finally looking at our overall table strategies. Well, what do I think?!  To reflect back to Tyson’s very own questions:

Any thoughts or suggestions on this list and my game plan? Does it check out in theory? No flaws or rule violations?

I think the list is a strong 3 – 2 list if we had taken this to a 5-round competitive GT. It’s essentially taking the ideas that Imperial knights do, but with a bit of that nice Necron flavor of troops and shooting. We have some action dummies, but our To the Last targets are big and juicy, and massive targets. I would almost look to see if there was a different secondary we could do instead of TTL due to how imperative to our game plan those units are (Rob: Grind Them Down is an option when you know you’re running a few massive models that take a lot of work to bring down, provided you have the output to kill 2 of theirs)..Ancient Machineries is very doable with this list with the Canoptek units we have floating around. Stranglehold is also a great choice due to every single unit we have being having Objective Secured thanks to that fantastic custom faction.

Condit: It can’t be understated how cool this list is, even if it’s not likely to storm the top tables of a tournament. You’re definitely going to catch a couple people off-guard, and even a solid percentage of the lists that are at least in theory “ready” for this are going to have a rough time with it just because it’s going to force a paradigm shift without a clutch. About the only change I’d suggest that doesn’t disrupt the core theme of the list would be starting one of the Monoliths on the board. If you try to deep strike both of them, I’m concerned that you’ll wind up having to deploy one of them on your own board edge too frequently to make it really worth it, and having that much shooting unavailable for at least one turn is going to hurt.

Gunum: The list checks out theory, even if we feel like having such great shooting platforms so unavailable in a game where the first turn can be so vital. A strong AdMech or Drukhari alpha strike could be a real threat to the Vault and losing that on turn one really takes the teeth out of the list. No rules issues, and the only flaws are the ones we’ve mentioned here.

Condit: But when that alpha-strike doesn’t materialize, this list is going to put on one hell of a show. I agree with Rob here – take Grind Them Down in lieu of To The Last, since you’re not going to be able to hide the big targets, and your opponent is basically going to have to kill them if they want to have any chance at winning. Instead, lean in and use their firepower to clear out space that you can then fill with more gigantic Necron constructs. And with how physically large so many of your models are, every bit of space you fill is going to make it that much harder for your opponent to stop you from scoring Stranglehold.

Hear Me Out Energy? F**K Yeah.

We love this list. It’s trying to take some new takes on one of the older 9th books, that honestly has started to feel pretty stale.  Attempting to use some badass models that we don’t see that often, and essentially jam them down your opponent’s throat via some risky deep strikes sounds like something I would do myself, and I’m psyched to hear about how this list does.

Would you like Gunum and his zany crew of knock-off Dark Angels to Hear You Out?  Maybe you have your own feedback on the list, or just want to tell Gunum his beard needs to be trimmed. If you have any feedback or questions, feel free to drop a note in the comments below, or email us at contact@goonhammer.com.