His Butt Goes Where?! – The Artistic Hilarity of MonsDRAWsity 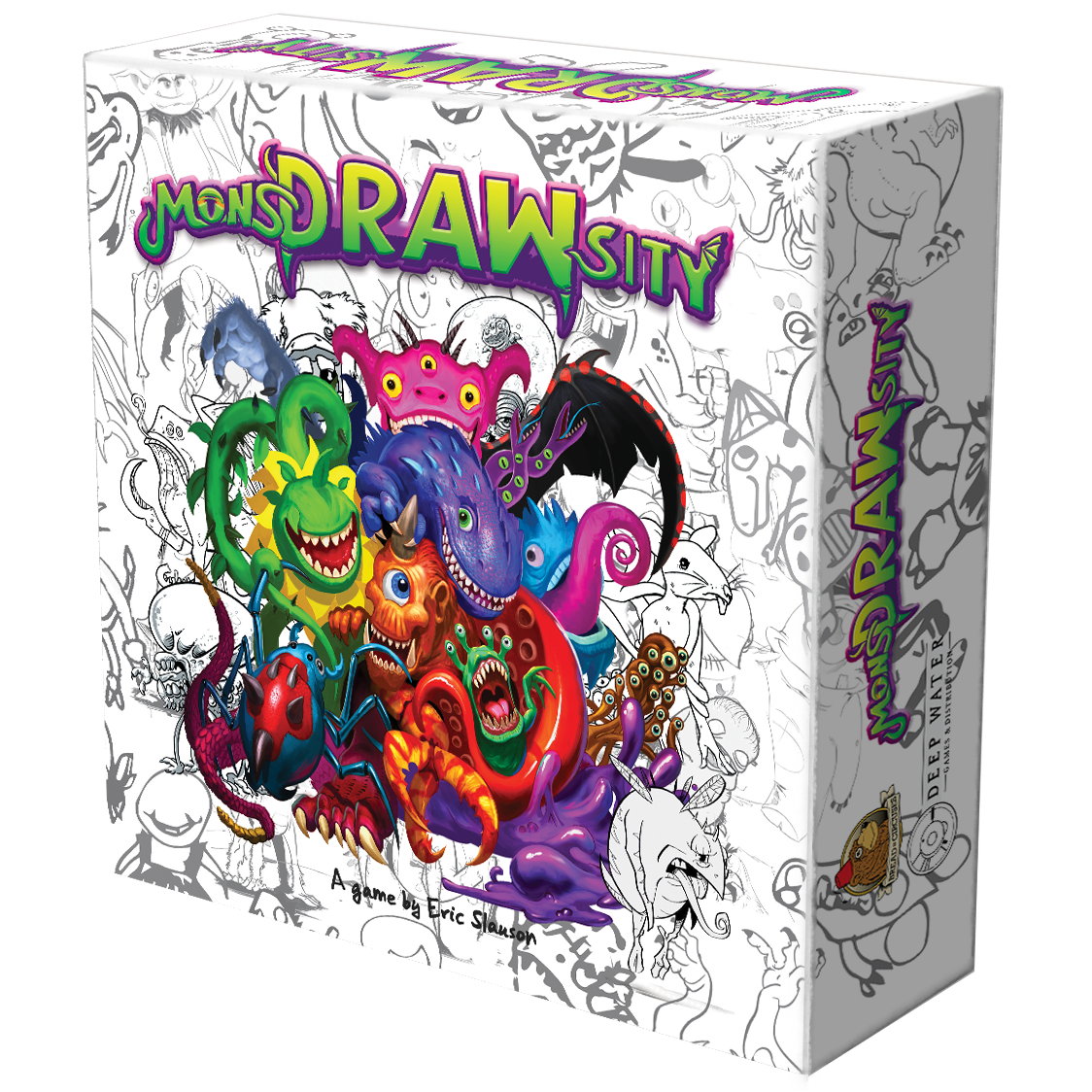 A couple months ago I reviewed Tattoo Stories and said it was my favorite party game of the year. Eric Slauson knocked it out of the park with a fresh twist on the familiar Apples to Apples formula. Well folks, I’m really glad that I didn’t play MonsDRAWsity—another Slauson 2020 release—until 2021 so that I didn’t have to pit them against each other. I picked up MonsDRAWsity a few weeks ago and thanks to an incredibly excited young gamer in the house we’ve played it almost daily.

As you might guess from the title, MonsDRAWsity is another illustration based party game. In this one, the Witness has 20 seconds to memorize the picture of an absolutely bonkers drawing of a monster before getting 2 minutes to try and describe it to the other players. They’ve taken on the role of a police sketch artist in a Men In Black style organization called the Department of Recording Anomaly Witnesses (D.R.A.W.) and have to do their best to recreate the monster by listening to the Witness and asking questions. The catch is that the Witness can’t look at the Monster Card outside of those 20 seconds; they’re on memory alone.

Right off the bat this is a ton of fun. The monsters included in the game are creative designs, running the gamut from easily described to some Salvador Dali monster-mash nonsense. Just listening to the Witness can be funny. “Um, yeah he has a mouth but it’s where his butt should be? His butt is on his trunk. Oh yeah, he has a trunk. It’s on the wing.” Trying to figure out what kind of questions to even ask gets your brain going and it’s very common for the artists to spin off in completely different directions based on how they interpret the Witness’ descriptions.

While the mechanism is different, this group scoring element spreads the love around the table in a similar way that Tattoo Stories’ 5-card system does. Everyone gets to be involved in scoring. Pouring over each other’s drawings to decide if Sarah gets the point for having 6 spines or if Jerome gets it for accurately placing the third mouth gives everyone a second to compliment and laugh at each other. It also puts the Witness in the hot seat for a second, as the players express good-natured incredulity at whatever the hell that description was supposed to mean. This briefly inverts the default power dynamic present in these games in a fun way; both parties are challenged and both are judged each round.

Playing With Kids, or Why I Have No Paper in My House

Like many Goonhammer readers and authors, I have a couple little monsters of my own running around the house. Also like many Goonhammer readers and authors, I have spent all 5 years of my eldest’s life trying to instill my love of gaming. I am of course happy to encourage any of his own interests but it is natural to hope our kids enjoy the things we enjoy. While my 5 year old has enjoyed various HABA games, classics like Candyland, and modern games like Ticket to Ride Junior, nothing has ever really grabbed his attention…until MonsDRAWsity.

From the moment he saw the dry-erase markets packed into this box he was hooked. On the first day that my copy arrived he asked almost every 30 minutes until we relented and played a few rounds. He then asked again before dinner, after dinner, after bath, the next morning before school, the next morning after school, and pretty much every day since then. A single round of MonsDRAWsity has become a nightly tradition and when we finally told him we needed a break from playing the game he disappeared with a marker and stack of paper and began drawing his own monster cards to include in the box.

While we don’t do the full extent of the scoring with him, it doesn’t really matter. This is the kind of party game that is less about the points and more about the process. He loves his turn at trying to describe the monster and listening to him explain where the weird spikey things go is a delight. Similarly, the creatures he comes up with are hilarious. More than that, it’s encouraging a broader love of gaming as an activity he can do with mom and dad. I think he hopes that even when we need a break from this game we might be up for a different one, and it’s certainly hard for me to say no to that.

I think this highlights an important consideration when playing games with kids (or grown-ups for that matter): any game can be a ‘gateway game’ if you find the right gate to walk through. My son draws like there is no tomorrow. He goes through reams of printer paper, crayons, and pencils. Of course it’s a drawing game full of laughter that lights the spark of gaming, and not one about pushing trains around a map. I’m going to lean into this one and hope that spark grows into a flame. My only concern now is running out of Monster cards we haven’t seen; luckily there is already an expansion we can pick up.

The party game genre is a crowded field, and there are plenty of great options. For my money the best ones spark communication, not silence. They let everyone play rather than a select few. MonsDRAWsity does all of this. Everyone at the tabled is engaged throughout, and everyone gets a turn to judge and be judged within the same round. That naturally takes the sting out of the judging. Errors of omission become amusing, total misinterpretations become hilarious. While it may be tough to see yourself playing a party game soon, what with the pandemic and all, I think this one is worth picking up. It takes minimal effort to play over webcams and if you play through the deck of monsters like we’re in danger of doing soon, future monster packs will keep the fun going.