Hitman and Hitman 2 — Soon to Be a Trilogy of Assassination 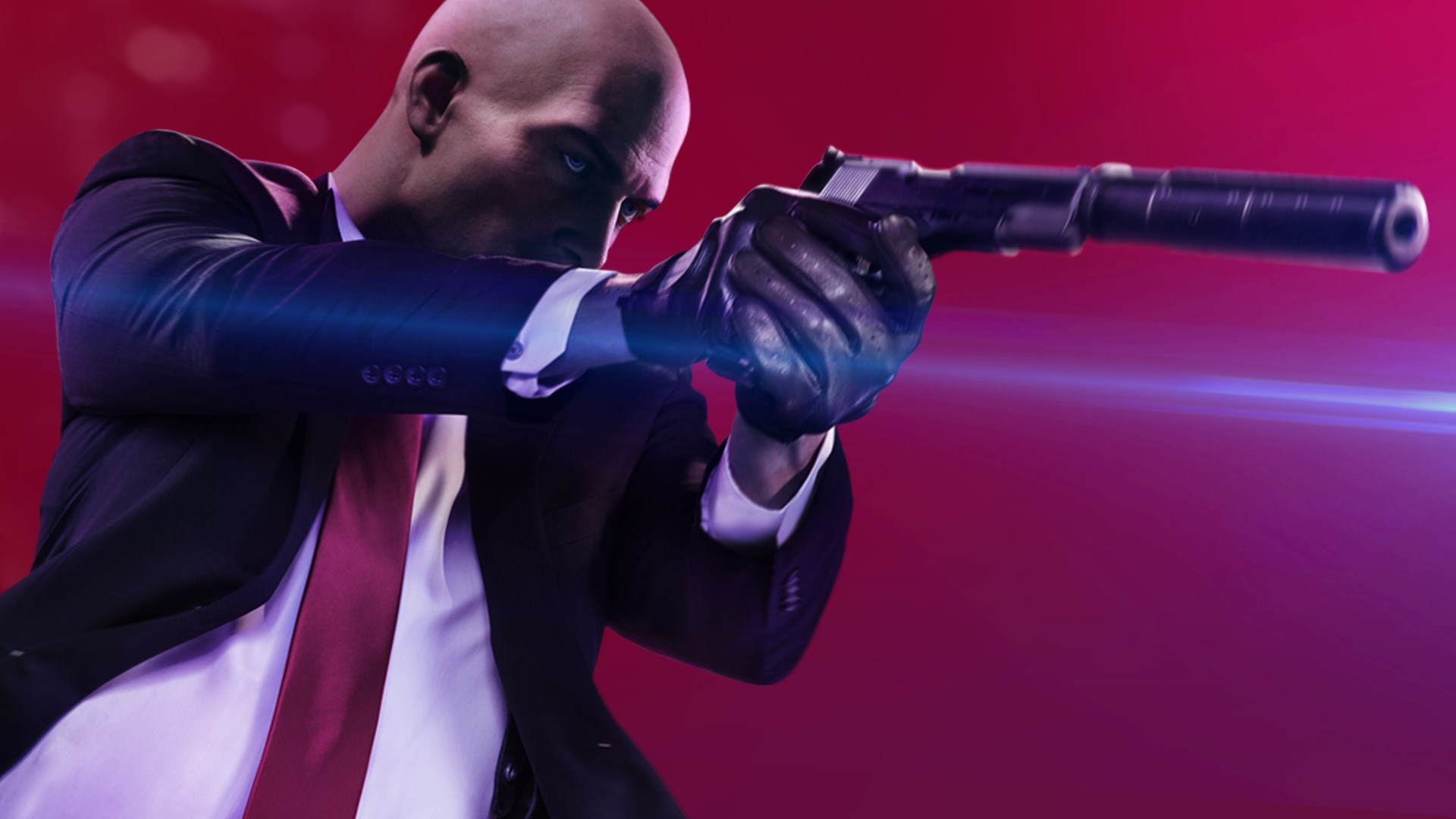 There are games series with a longer record of service than the Hitman franchise, and there are games series that have been more consistent with what they deliver than the Hitman franchise, but there aren’t too many of them, and the ones that are so clearly at the height of their power in the way that Hitman is on the eve of the release of Hitman 3 under IO Interactive’s stewardship are very few. It might literally just be the Zelda franchise and the stuff they’re getting up to with Tetris.

We will be covering Hitman 3 in this space next week, but as a warmup, we’ll be looking at the first two games in the current iteration of the franchise, which sort of became a trilogy via the accident of its own extraordinary success. The first Hitman game, Hitman: Codename 47, turned twenty years old last November. I spent less time with that game than I did with Hitman 2: Silent Assassin, but other than some incredibly obvious control tweaks the two games played very similarly, which is to say they’re essentially unplayable if you want to go back and give them a shot now. I recommend it! It’s quite an experience. But there’s an entire grammar of third-person stealth action that just did not really exist yet — and wouldn’t exist until Assassin’s Creed and the consequences of everything that came after that — and the Hitman franchise would be slow to implement a lot of those lessons for many years.

‘Slow’ is sort of the watch-word for the first entries in the series — Hitman: Contracts and Hitman: Blood Money fall into this category as well — where play is extremely deliberate, and Agent 47 doesn’t move around all that well under the best of circumstances. The reason open combat is so fatal in this tier of games is that if you think the controls are clumsy for sneaking, trying your hand at using them responsively when guards are unloading AKs into you is a whole separate matter. Then IO Interactive switched publishers from Eidos Interactive to Square Enix (when the latter, which owned IO Interactive, acquired the former) for Hitman: Absolution, wasn’t even the lead studio on development, and the problem sort of jackknifed in on itself — in addition to a very 2012-as-a-pejorative story and obsession with cinematic narrative focus, it was now a title with Action sequences and Stealth sequences rather than something of a puzzle title, and it very firmly needed you to complete the objective in the upper corner of the screen that the game handed you in one of a few prescribed ways that the game developers had come up with. The game was not a success, and everything to do with it went down the memory hole. 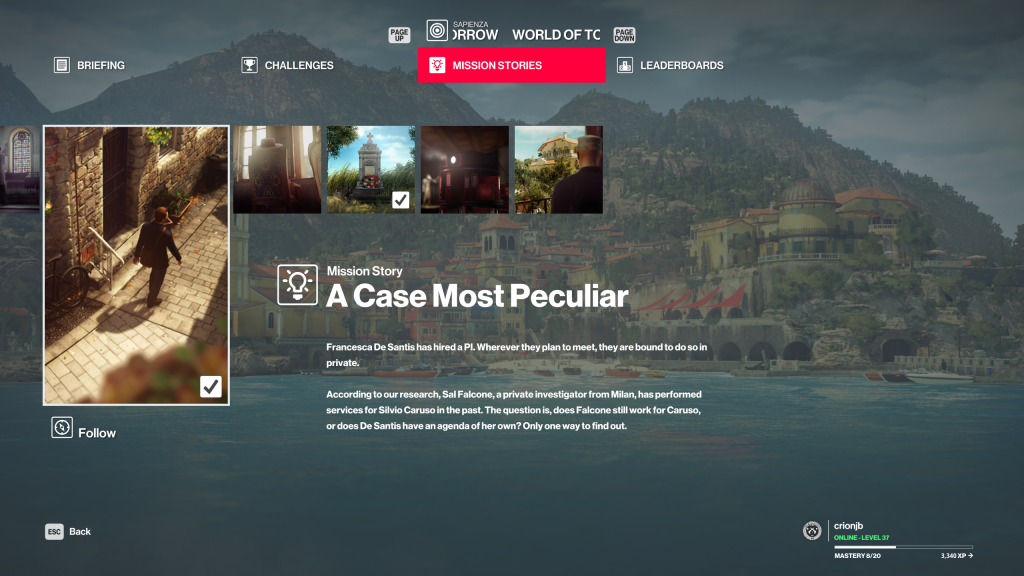 There’s still some narrative guidance; Mission Stories (Opportunities in Hitman 2016) give you structured ways to complete your mission, with fun text from Diana.

IO Interactive was back in the driver’s seat for Hitman (2016), which was essentially a reboot of the entire franchise. One thing Absolution had sort of gotten right was that in the Action sequences, Agent 47 now had the ability to perform like a character in an action game — shooting guns and throwing grenades was brought up to modern spec. However, the core gameplay loop of the games that had made the series’ name returned: Each level was a clockwork sandbox, some piece of real estate where men and women, civilians and armed guards, went about their routines — and somewhere in there were a couple targets that Agent 47, now very far removed from any pretension of being a cipher after years of goofy clone plots, international cabals, fake funerals and, yes, sigh, evil assassin nuns, would have to eliminate.

The levels in Hitman and Hitman 2 luxuriate in this feeling of place, timing, and mood, and the ways they combine. If that sounds too artsy for you, what I mean by “how they combine” is you can (for example) put a livewire in a puddle, hook it up a car battery, electrocute a guard to death, and then wait as the consequences of that ripple outward, drawing in more and more people to electrocute to death, until you have a giant pile of dead people as the emergent consequence of your actions and an entire map of survivors afraid and with different security patterns now. Was it useful to you to perform this act? Probably not (perhaps, on certain maps, in certain escalations, it was). But it was fun, and just as importantly, it was of significant consequence to the world around you. 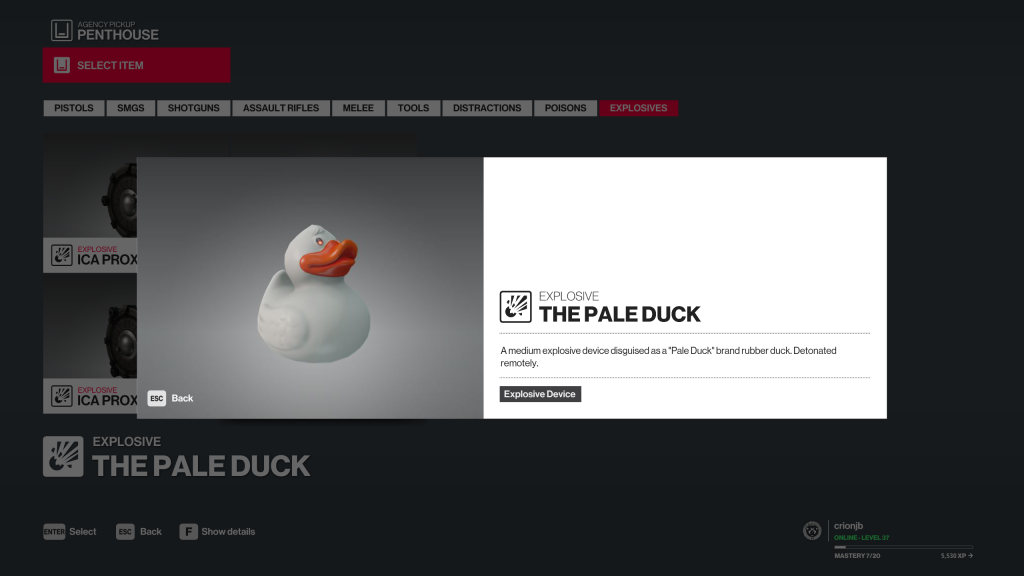 By the end of both games, the Pale Duck is an old, familiar friend. He’s a rubber duckie bomb.

Perhaps the best knock-on effect of puzzle box Hitman games getting responsive, snappy modern third-person action controls is that it has concomitantly reduced the importance of disguises. This seems unintuitive at first — disguises are a huge part of the Hitman experience! The idea that this dead-eyed, monotone bald man could dress up as anything other than a personal bodyguard and pass is a major part of the humor! And that’s still true in Hitman and Hitman 2. But disguises have always been viewed as something of the “easy mode” in these games; if you want to play a Hitman game the right way, the way truest to the franchise’s routes, you want to go SA/SO: Silent Assassin, Suit Only.

Silent Assassin is an easily-explicable enough achievement, and has been in these games since the 2002 entry with that very phrase as its subtitle (Codename 47 did not have an explicit title-based ranking system for mission outcomes). The idea is that you kill the target, only the target, and trigger no alarms or found bodies. You can knock people out to take their clothes, but if someone finds their body, that’s usually it for your chances at Silent Assassin (though some games will give you a grace body or two; Contracts and Blood Money were occasionally baffling about where these thresholds were). Suit Only is an unofficial designation, and it is what it sounds like: you do the level and get Silent Assassin without ever using a disguise. 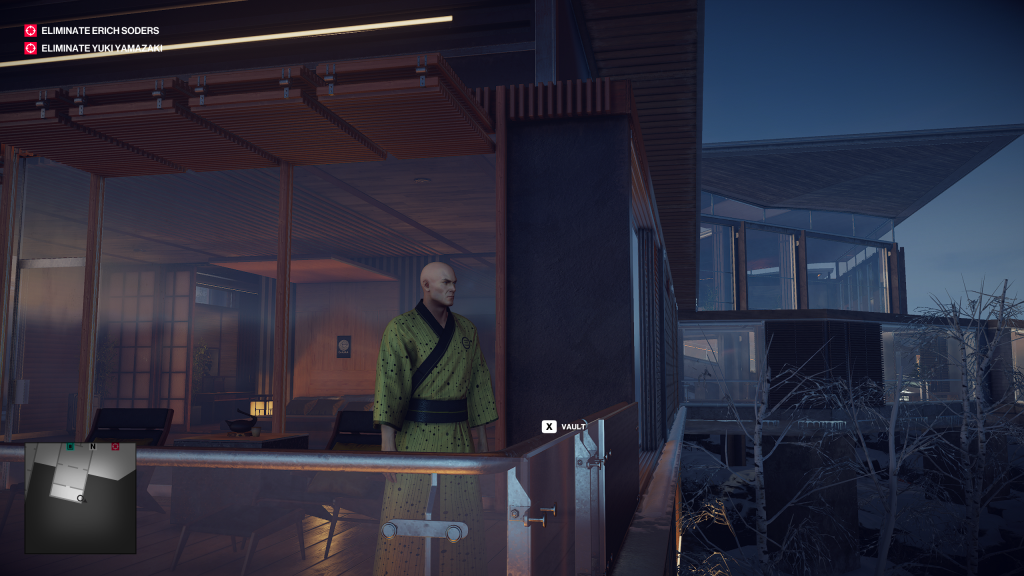 Starting in your suit is a choice; Agent 47 has many fits, including this gaudy robe in the Hokkaido level, a throwback to Hitman 2: Silent Assassin (fewer techno ninjas this time).

You can technically complete every level in every Hitman game Suit Only, but it can get…quite tedious. Lots of guards to memorize the patterns of and very slowly sneak past; lots of rote stuff you just have to know, and very little improvisation on the fly before your run is borked and you have to start over. Being so much more agile and controllable in the new games means having a lot more bites at the apple in each run — if you can simply outmaneuver a guard in this hedge maze or that junkyard, you don’t have to restart or save-scum every time someone comes through a door the wrong way; and since you have modern stealth mechanics, including yellow alerts, vision cones, and “this guy can see you” meters, there’s a lot more information at your fingertips than there was back in Silent Assassin when the way you found out you were seen was a guy shouting “Hey!” or, even more upsettingly, a detection showing up on the post-mission report that you don’t recall ever even noticing in the run. This also gave IO Interactive license to make the maps quite a bit harder, leading to Hitman’s Colorado right-wing militia compound, one of the most punishing levels for a Suit Only run yet devised.

The story is still B-movie pablum involving competing Illuminatis — it’s impossible to construct any other situation where you’re a paid hitman killing people for fantastical amounts of money and they all turn out to deserve it, rather than mostly being mistresses with the gall to get pregnant, union organizers, and corporate whistleblowers — but the relationship between Agent 47 and his handler, Diana, remains the comfortable focal point of how the narrative drives forward (without getting too far into spoiler territory, this might not be the case for the Hitman 3 title) and there is a certain dark humor that undergirds the whole affair and comes from the games resolutely sticking to landing the joke in full deadpan: Agent 47 disguising himself as a studio drummer and nailing a drum solo during a recording before poisoning not-Jared Leto’s birthday cake; clearing an entire room of security guards by hucking cans of beans and corn at them; the homing suitcase. They’ve made two Hitman movies as of this writing and despite the first starring a bald Timothy Olyphant desperately trying to pay off his house after the cancellation of Deadwood, neither had any real idea how to handle the property, which should be played as a hyper-real cartoon combining action-comedy bits that mix Jackie Chan with John Wick and setpiece assassinations straight out of a Rube Goldberg machine, helmed by a protagonist who insists at all times this is completely serious and refuses to smile. The games, thankfully, stepped back from the brink of Hollywoodization that Absolution represented and have leaned into the goofiness. 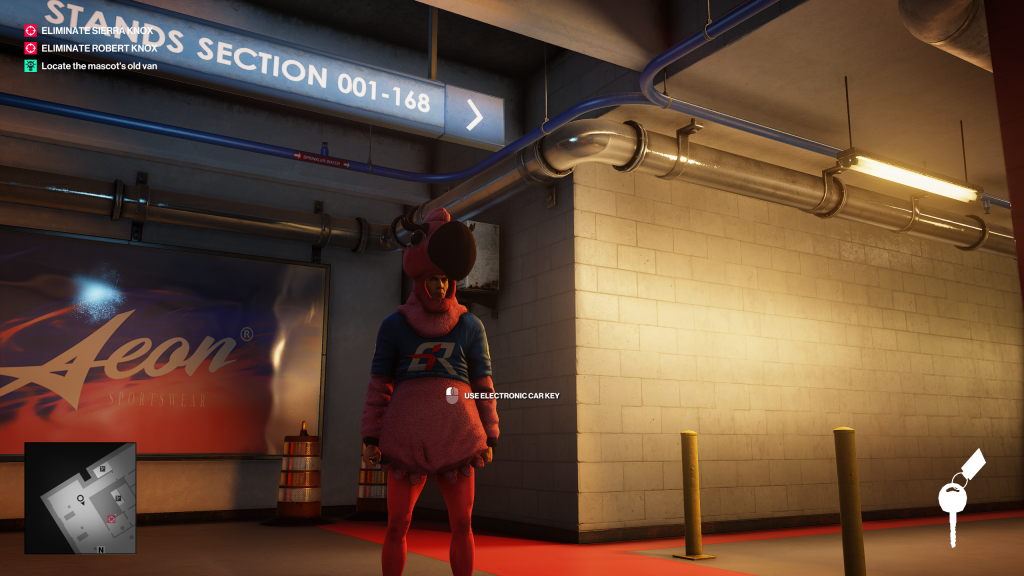 Oh to be a corporate mascot, searching for a car, filled with blackmail material.

Once you’re done with the story, the levels are endlessly replayable, too; in addition to the Elusive Target mechanic, wherein IO Interactive would do weekly special assignments, placing targets in one of the game’s levels and giving players exactly one shot at completing the kill (Gary Busey and Sean Bean guest-starred), there are escalations. How do you make pure sandbox play more focused and more fun? You provide tougher objectives and more restrictive conditions, many of which make no story sense whatsoever. What use is a sandbox if you can’t play with the means by which you play in it?

Easily the biggest marker in the new trilogy’s favor, however, is that all of the previous games are playable inside the latest game — meaning you can play all the levels from Hitman in Hitman 2 if you own the content, benefitting from engine improvements and control tweaks from the intervening years on the old maps, and when Hitman 3 comes out, all the levels from the first two games will be playable in its engine as well. They’ve also finally done some storage optimization; whereas Hitman 2 installs at around 140 GB with both games installed, Hitman 3 has been said to handle the full trilogy at around 100 GB. Still a lot of real estate…but only about as much as your current Call of Duty is asking for. And in Hitman, only Agent 47 has an aimhack.

You should get Hitman and Hitman 2. The more confusing question is where. Hitman 3 is going to be an Epic Game Store exclusive for a while, you see, and while IOI and Epic swear that you’ll be able to carry over progress made in the Steam games — mediated through a proprietary account with IOI — the details remain frustratingly vague. Steam is probably still the way to go; you can get all the content released to-date across Hitman and Hitman 2 for $100 there, which is $20 less than they’d have retailed for separately and includes season pass content.

Have any feedback or questions? Drop us a note in the comments below or email us at contact@goonhammer.com.