In Hobby Heresy, we look at conversions, kitbashes, and other custom projects by Goonhammer authors and explore the thought processes behind them and the work that went into them. It’s part hobby showcase, part tutorial. This week, we’re looking at those daring duelists, those Templar examplars, those holy himbos, Space Marine Chapter Champions.

When the Ultramarines codex supplement launched last year, I was thrilled to see that the Ultramarines Honor Guard hadn’t been relegated to Warhammer Legends. The jamokes with bolters, banners, and axes were cool, but the Chapter Champion in that set always stuck out to me, even when it was a new kit back in like 2004. I wanted to add one of these boys to my own Ultramarines, but with an all-Primaris army, having one shortstop champion didn’t feel right. With a hefty bitz box and a cool old model to base a kitbash on, I got right to work! 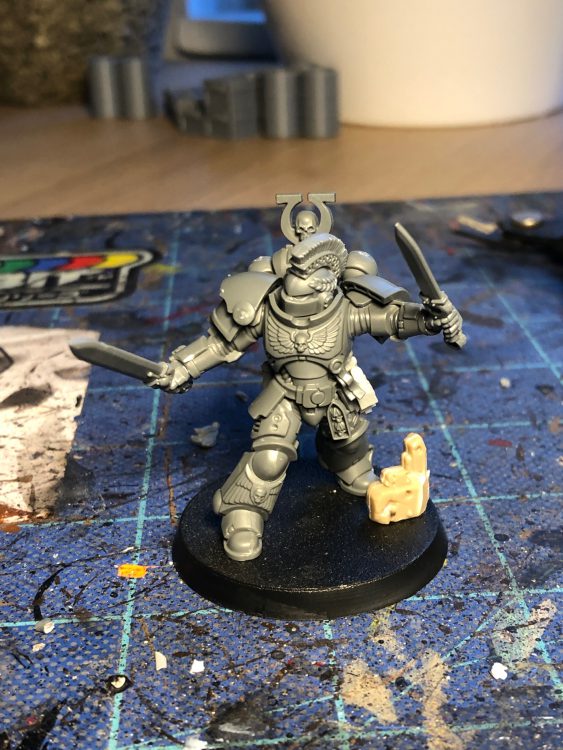 I knew I wanted to give him a defensive duelist’s pose, as this wasn’t some frothing-mad Templar, but a cool and calculating Ultramarine who defeats his foes with FACTS and LOGIC. I picked the power sword Primaris Lieutenant body out of the Dark Imperium box set, as I wanted something suitably ornate (well, ornate for a pre-Indomitus world anyway) that would stand out from the pack. I used the power sword arm as well as a pointing Intercessor arm, and swapped in a pair of Ultramarines gladii from the old Ultramarines upgrade pack. I slightly angled them towards his center to give him a more defensive stance. His head also came from this pack; it’s suitably knightly and Greco-Roman looking, and is a dead ringer for the one on the old metal Chapter Champion model. I really dig this set over the newer Primaris-focused one, as I find the bits to be more characterful and ornate.

Unfortunately, the Lieutenant model he was based on had an empty pistol holster, so I carefully cut that away and replaced it with Roboute Guilliman’s holstered bolt pistol from the Horus Heresy range. It has a cute Ultima on it and everything! I don’t even know where this bit was supposed to go on my Guilliman, but there’s plenty of holstered bits you could use were you to try this at home. To make him that much more “Ultramariney” and give the model some height, I stuck an Ultramarines icon on his backpack. I think this came from the old 4th edition Space Marine command squad and is normally a banner pole topper. Lastly, I wanted to reproduce the layered armor effect the original metal model had. I’m none too handy with green stuff or plasticard, but fortunately my bitz box was able to deliver here. I had some spare shoulder pads from a squad of Tartaros Terminators, and they’re perfectly sized to layer over a Space Marine pauldron! I went with just one, as I didn’t want to make him look like a top-heavy football player, and asymmetry is something I always associate with the “duelist” archetype. 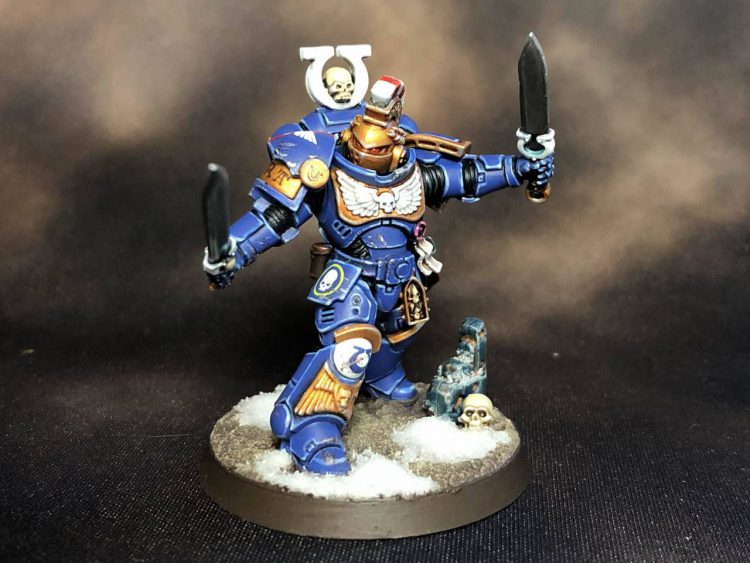 I knew I wanted this guy to be flashy, but also to tie into my scheme. Fortunately, the old Chapter Champion gave me a good jumping off point, and I added my own flourishes from there. He had plenty of space for decals on his knees, hip plates, and shoulders, so I was able to give him some codex-approved markings. Making his chestplate gold was something I wanted to do from the start, as was inverting the blue and gold on his uparmored shoulder. Again, drawing on that old model, I wanted to get some freehand on the gold, so using thinned down Rhinox Hide and a very fine brush, I put an Ultima on the little roundel and a big ol’ “ULTRA” in the field of the shoulder. 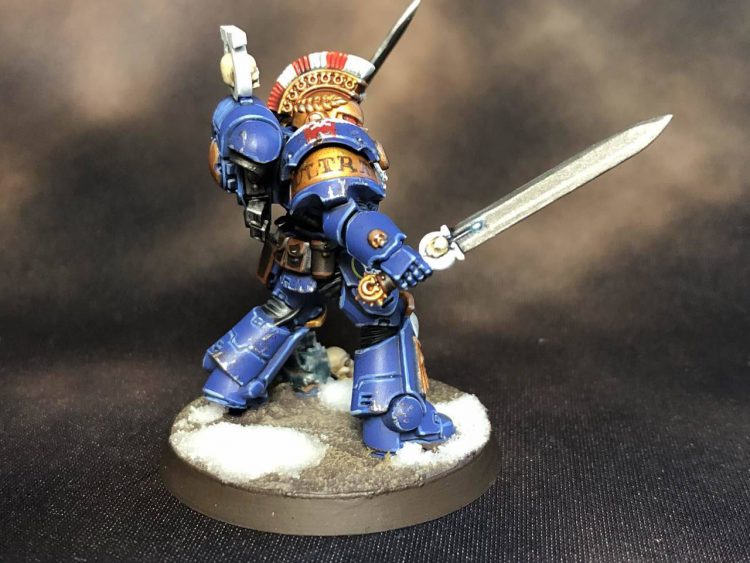 I did this freehanding pretty early in the painting process, so I could go back and clean up any mistakes with Retributor Armour before applying any washes or highlights. His extra shoulder armor was looking a little dull, so I added a flashy red racing stripe and a white Aquila decal over it. When it came time to weather this boi, I concentrated more scratches on this side as I figured it would be his “defensive” side. I figure he would be blocking with his bigger sword and uparmored shoulder, and would actually be delivering the killing blow with his smaller gladius. 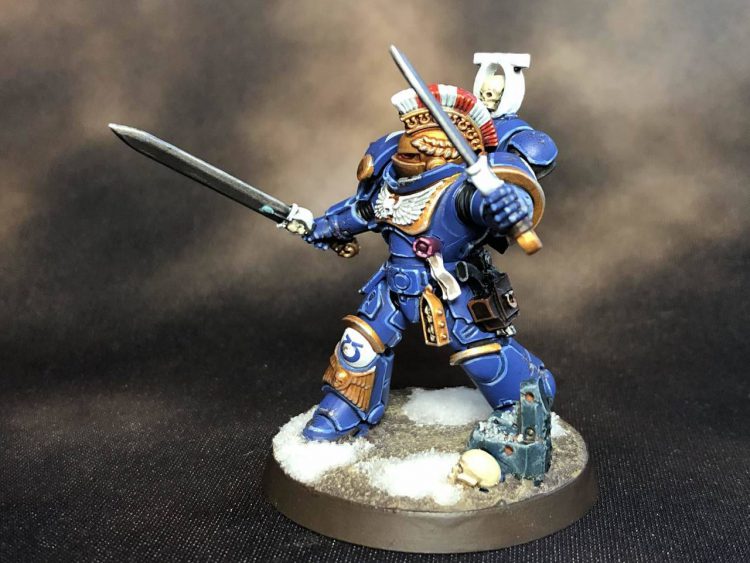 Just for funsies, I gave him a striped crest on his helmet. I wanted to incorporate just a bit more red into the scheme, and stripes of all varieties are extremely my shit. There was also a nicely balanced amount of white on the model too, as both swords, the back icon, chest, helmet, shoulders, and right knee all feature white pretty prominently. Again, it’s slightly more concentrated on his right, “defensive” side, but I wanted to get as much symmetry as I could with it regardless.

My only regret with this model is that I didn’t do any sort of personalized heraldry on his blank left knee, but it was honestly hard to get a brush in there with his pose and basing. I probably should have done more with the base too, but I made sure a skull was on there because, well, Warhammer.