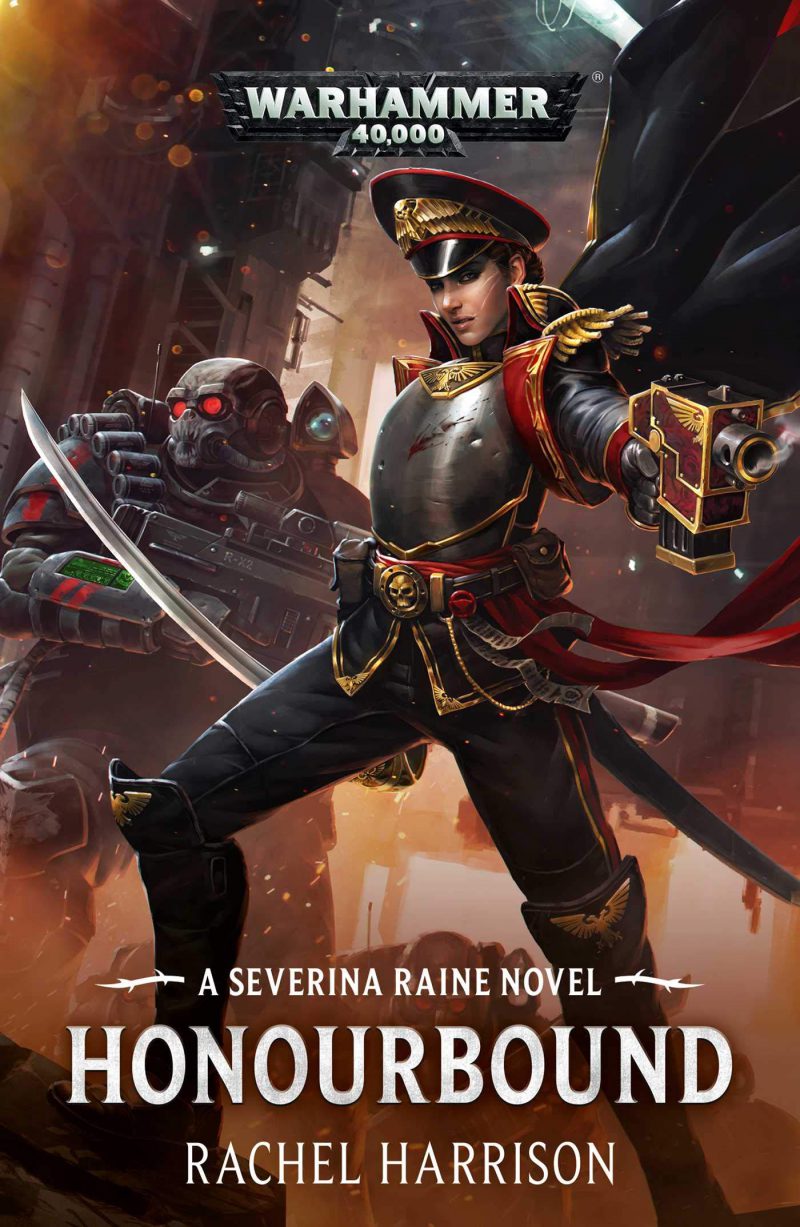 It’s very good and you should buy it.

In fact stop reading this review and smash the buy now button on the book and the excellent mini which I’ll totally paint up soon.

Well that was brief.

Ok so Corrode has told me that I should probably write more of a review than this so here is my deep dive. There will be mild spoilers but nothing that will give the big plot beats away.

Honourbound is about Severina Raine, a Commissar of the 11th Antari Rifles who are currently crusading to secure the Bale Stars. This brings them into armed conflict with a rather nasty bunch of Chaos cultists and traitors.

Now seasoned (or cynical) Black Library readers might find this familiar. We have a Commissar in the lead role, a competent Guard regiment with some sweet perks and a bunch of Chaos bad guys to fight. A situation that brings Gaunt and to a lesser extent Ciaphas Cain to mind. Hell, Raine’s weapon loadout is even very similar to Gaunt. I’m not going to lie, a few pages into the novel I thought this was going to be a rather by the book, paint by numbers affair.

Oh boy I was wrong. So very, very wrong.

Harrison played on my expectations brilliantly. At the start of the book, we have a Guardsman fleeing the fight for very understandable reasons, Raine finds him, clearly suffering shock. At this point I was expecting an echo of Gaunt’s heroism by example, showing the wavering Guardsman the way forward to victory. Or maybe the trooper would be reassured by a Ciaphas Cain-like quip. I might have even said “Oh come on mate. Really?!?!?”

Then Raine just right up shoots him then and there.

This was a massive “sit up and pay attention. This is not your standard heroic Guard novel” moment and I loved it. This moment sets the tone and Harrison runs with it, playing with the reader’s expectation of the characters and plot throughout the book.

Speaking of the characters, Raine has a supporting cast of Andren Fel, Daven Wyck, and Lydia Zane. Again Rachel uses well known archetypes and layers in some really cool character quirks to provide something different.

Andren Fel is the hardcore stormtrooper tough-as-nails Special Air Service type, yet comes across as kind, loyal and thoughtful. Wyck is your superbly competent Guardsman, yet has some serious drug abuse problems. On that note, Harrison doesn’t hide away from portraying the physical, mental and social costs of Wyck’s abuse problem, using it to provide grit to the novel. Zane is a sanctioned psyker under Raine’s authority, providing a really cool window into the mental fortitude it takes to survive as a bound psyker in the Guard. Each of these characters starts off roughly what you would expect from reading the tin, it’s not till you get to know them throughout the book that they go from being their standard archetype to something truly unique and awesome. Honestly the best way I can describe it is the whole Shrek and onions thing. These people have some serious layers to their characters.

Raine herself is a complex human being underneath her outward facing role as a Commissar. I won’t spoil it; her backstory and character is slowly revealead though the novel. It quickly becomes very clear why she would blam a guardsman rather than taking the risk of hoping he turns around and gets back in the fight. By the end of the book you are genuinely cheering her along, hoping she gets justice against the very system she upholds. I also liked that she had a bit of a rough edge to her. Severina has some serious (but as the book shows, understandably so) red button anger management issues around certain conversational topics and isn’t afraid to throw a serious punch or two when it might not be politically advisable. In short, Severina Raine is not Ibram Gaunt or Ciaphas Cain and the book is better for it.

As for the bad guys, the Sighted are excellent villains and I really hope Harrison shows more of their society and way of war.

Circling back to the larger plot, Honourbound starts off as a typical gothic sci-fi war story of the kind that the Black Library excels at. What makes it stand out is how Harrison seamlessly weaves in a bit of crime fiction and political intrigue to the novel, while peeling back the layers on Raine’s personal history. This could have been clunky, but it’s executed really well, with all the moving pieces coming together neatly at the end. I also liked the little asides with various unit names and the like popping up. Hopefully this is a sign that Rachel is going to take these little notes and mentioned characters and runs with them in the future, much in the same way that Dan Abnett did in the Sabbat Worlds or ADB’s Elara’s Veil. These little bits are gold for people looking to spin up 40k armies based on the books.

There are some negative points that I think I should bring up. At the start of the book the action can seem to lose its flow, with momentum and dialogue sometimes being broken by a bit of slightly awkward prose. This is mostly prevalent at the start of the book and is more or less totally absent by the end of the novel. Combined with the characters and the plot slowly building, the start of Honourbound can be a little bit of a slog. However I can’t stress how well the book lures you in once you get over this hump. In fact if the slow ramp up is the price of getting complex characters like Raine, Fel, Wyck and Zane then that’s a price I’m more than willing to pay.

To wrap this up, the book starts slow and builds towards a sensational finish. If you are anything like me you’ll find yourself reading more and more of the Honourbound in each sitting due to this effect. I can not wait to see what Raine and friends get up to next.

Rating: It’s good boss. You will not regret buying this.

Cost:
Normal Gee Dubs hardback/ebook pricing. I picked up the ebook version via amazon for what I thought was a more than reasonable price.

Time:
It’s a full length novel and it kept me entertained throughout.

Effectiveness:
The book is excellent! Barring a few minor hiccups at the start.

Cool Factor:
Raine is cool. Fel is cool. Wyck is cool. Zane is cool. They are all badasses. This is a very cool book. 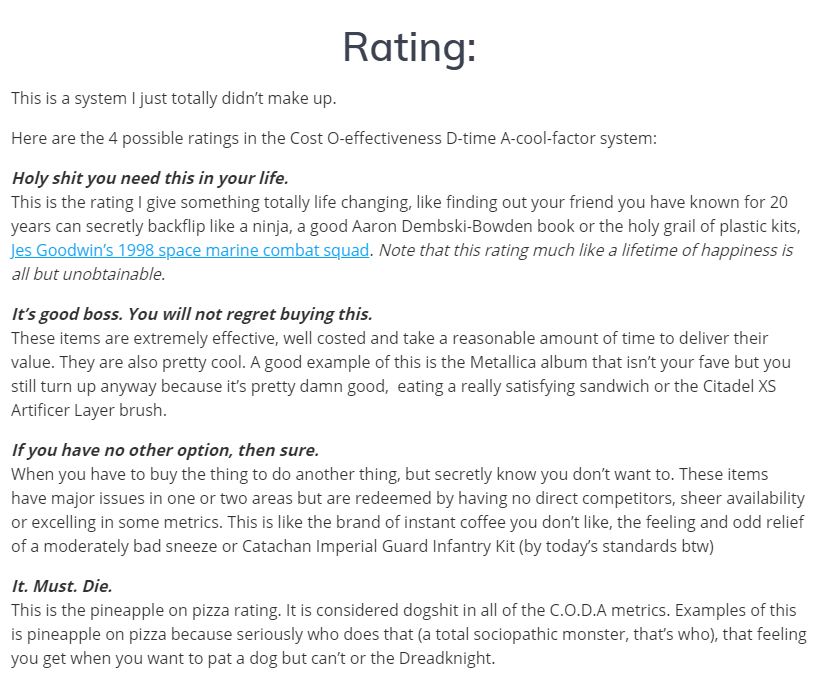