How to Base Everything: Metal Spaceship Decks

Basing is a critical part of the painting process. Armies on the battlefields of the 41st Millennium or the Mortal Realms will find themselves fighting across a wide variety of terrain, from lush jungles to barren rockscapes, industrial wastelands to agrarian fields. Your basing helps tell the story of your army – where are they fighting and why? In the spin-off How to Base Everything series, we look at different methods for basing your miniatures, so that you can locate them in time and space.

Ladies and Gentlemen We Are Basing in Space

Having gotten sick of seeing my Dark Angels tabled, and been seduced by fully-sick Apocalypse deals, I recently took the plunge into a different extremely bad army.

One of my goals with this project was to replace my usual low-effort “Citadel texture paint” or “glued down sand” basing with something a little more involved, and I thought how that went might be relevant to the Internet’s interests. We’ll start with the army itself, to give context, but the main idea of the thing is about the bases – somewhere between a build log and a tutorial.

Right next to my 40k cabinet is a second Detolf full of Gundam model kits. I’ve always wanted to try and combine my two types of plastic sons, and my extremely stupid idea was to build a Tau army themed after the original Mobile Suit Gundam – a 2,000-point list with only battlesuits (drones also count, for some reason). I even hacked up a Battlescribe file to change unit names, and had Buttscribe create a list for me:

With the army theme nailed down, high-tech Mobile Suits need high-tech bases. I could have bought any of the many different resin options, but it seemed like a fun project to make them myself.

For your own basing projects, I’d recommend starting by doing some research. Easy enough, right? Wrong, you didn’t do enough Google Image Searching. You fucked up, and everyone online saw it, oh no. You want to have a really solid idea what you’re aiming for before you start, in terms of both the form and colors, is my point.

Existing wargaming bases (either off the shelf or custom) are obviously a useful resource, but also real life or movies/shows make good reference images as well. For me, this meant that I had to look at pictures of Gundams on Instagram for a while. Which is definitely not something I already do all the time.

I wanted something that looked like the outside of a high-tech but somewhat grungy space colony, because a moderately clean style works for both the Tau and the Gundam aesthetic (the grimiest part of giant robot anime is roughly the same as the cleanest part of 40k, which is right about where Tau want to be), but you could do “extremely baroque Space Hulk flooring” or “gleaming Wraithbone” with a similar process to this, if you wanted – the Cool Shapes you want will change, or the presence and amount of riveting, but the basic technique is the same.

This is a good time to start thinking about colors, as well. The general rule is that light models go on dark bases, and vice versa, because everyone likes a bit of contrast (no, not that kind). I knew going in that I was going to end up with a variety of colors on the models – greens and reds and purples and grays (it’s still anime, even if it’s purportedly a more “realistic” one) – and it could be a problem to find a base color that worked with all of those. Fortunately, I also don’t want to use a lot of metallics on the models themselves, which meant I could safely go nuts with metal for the bases, and the consistent basing could be the visual link between models in a frankly bewildering array of different color schemes.

First off, I bought all the models I’d need. I find basing to be easier (and faster) if I do big batches at once, for the same reasons that batch-painting models works, but also because the glue and materials we’re using here make a mess. It helps with consistency as well, staying in that mode for longer.

I’m not suggesting you have to do all of them in one go like I did, but it probably wouldn’t hurt.

This is just what I used, as a guide. The cool thing is you can just wing it and make shit up as you go along – there’s a joke that isn’t really a joke, in the Gundam modeling scene: “GunPla is freedom”, and it certainly applies here: just do whatever you want. This is a hobby, you have my explicit permission to fuck around and have fun with it. Even if, especially if, the idea might seem stupid at first. Worst-case you learn a lesson and you’re out, what, a couple of 30-cent bases?

So not that much! And most of it likely already at your hobby station – certainly my parts list was just things I had in the house already, because I did this on a lark when I was bored one weekend. The minimum needs are, broadly speaking: a sharp thing, a flat thing, and a sticky thing.

After gluing my hands together for a couple of hours, I ended up with this: 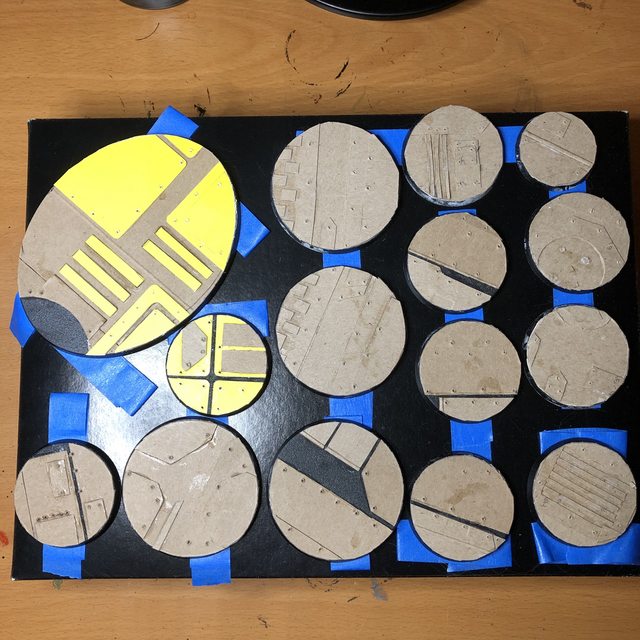 This step could obviously come later, depending on whether you want to paint the models on or off their bases, but I went ahead and did the painting first. Once the primer goes down, you can paint them just like any other model, but card (or, obviously, plasticard) aren’t like foam or MDF where you have to take special precautions before spraying, so it’s pretty much the normal workflow.

Spray your primer and base color. I used Krylon Shimmer Metallic, because it has a bit of texture, and because there was a full can sitting right under my desk.

Base coats down, pick out a few Cool Shapes on each base to paint other colors – I used bronze and dark grey. Don’t go too nuts here, you want maybe a third to half of the base to be decorated, but this is another super subjective part of the build. Fortunately, you probably started having ideas about painting back during assembly, so this is left as an exercise to the reader.

I forgot to take a picture of this step.

Then, wash the whole thing with Nuln Oil. A recess wash might have saved time here, but I didn’t think of that until it was too late. 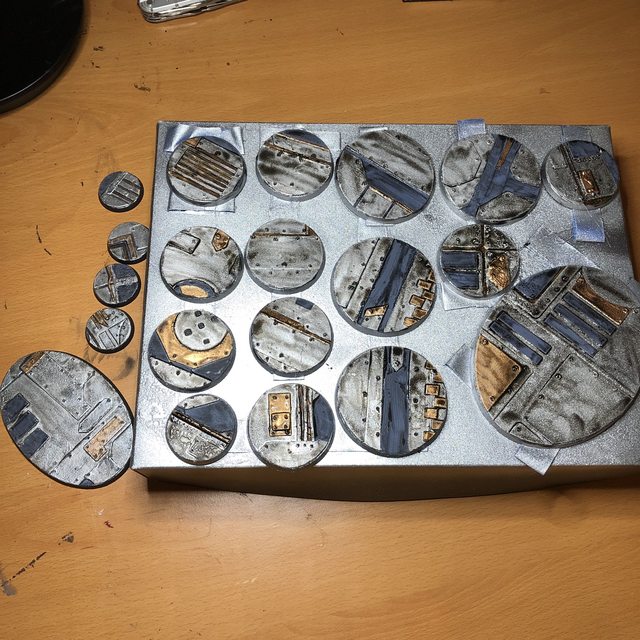 Drybrush metal all over to pick up the edges, clean up any flat parts where the wash pooled weird, and lay down some black along the sides of the bases, and we’re pretty much done:

Things you could do from here, if you wanted to kick your detailing up a notch, would be to pick out some areas with the Citadel technical paints – I think the rust and Verdigris ones could work wonderfully – or if you’re comfortable with weathering powders and oil washes, go for that. Hazard stripes were something I considered too, but I think even without any of that, they’re pretty decent.

Hi, TheChirurgeon here. Greg didn’t ask me to add this part, but our standard Goonhammer MO is to have multiple ways to do things and he asked me to edit his article, so that means I get to do whatever I want to it. I ran into a similar challenge last year when I wanted to add a Chaos Spawn to my Necromunda gang of Chaos Cultists, and because I’m all about the A E S T H E T I C S, I wanted to make sure he had a base that matched his Cultist handlers. Only problem was, Games Workshop wasn’t making 40mm Necromunda bases, which meant I had to make my own.

Process-wise, this was very similar to Greg’s approach, only with different materials. Rather than using paper card, I tend to use sheets of plasticard, or polystyrene (the ones Gale Force Nine makes are perfect for this). They’re just as easy to cut, albeit more expensive, and they carry the benefits of giving you something you can plastic glue a model to, and they won’t wear on the edges or warp like the paper can. I built up the base in layers using plasticard cut into geometric shapes. I didn’t do the rivet holes, and now I kind of wish I had, but there aren’t any on the 25mm Necro bases, so it’s not the end of the world. Shown below is the first step, where I left a gap in the first layer of plasticard to give the base details some extra depth.

Painting-wise, my Cultists tend to be a colorful bunch who wear blue and green into battle, so I didn’t need to go as bright on the bases, and I wanted to include some orange. My process for painting Necromunda/industrial bases is the same as my process for painting rusty metal and terrain:

Typhus Corrosion is an awesome technical paint to have. It dries with a rough texture that’s great for drybrushing over. Drybrushing the bright orange of Ryza Rust really gives it a rusted metal feel with lots of color depth, and edging silver helps show additional wear. The whole process is quick and easy, and works great on bigger terrain pieces. Here’s the finished product:

In Conclusion, Basing is a Land of Contrasts.

Custom basing can be an easy and fun way to add some flair to your army, and really emphasize your visual theme. In many ways, this “tutorial” illustrates the shittiest way to do it, since I had zero experience and limited time and materials, but that’s kind of the point: you can do this, anyone can do this. Give it a shot maybe, next time you impulse-buy a new army. Or don’t! Texture paint is fine too.