How to Carve Everything

In our How to Carve Everything series, we take a look at different the different vegetables you might have around your home examine their texture and thickness, and look at several different methods for carving them. Yes, Halloween is behind us but it’s not too late to put out spooky decorative gourds and some folks at the Goonhammer offices were extremely proud of their pumpkins this year so in today’s HTCE, we’re looking at the pumpkins our crew made this year and how they did it.

I weirdly actually ended up carving these for work! We were running some spooky Halloween themed events and a group pumpkin carving session, over video chat, sounded like a fun way to spend Friday afternoon.

I had a variety of sizes and colours to work with, from the traditional head sized classic orange pumpkin right down to a dark green miniature squash, still in the classic pumpkin shape.

For my first one, I started by carving out an entry through the top and scooping the guts out. My wife had bought me a specialist spoon, and while I was sceptical it was actually pretty handy for getting all the fibres freed up and thinning the walls a little! To help position my cuts I like to sketch what I’m going for in sharpie first, then get to cutting. Unfortunately, I forgot to take a picture of this step at any point but it’s pretty self explanatory.

Once I’d sketched in my shape, I started filling it out with some initial cuts inside of the lines, then carefully carved further out, leaving me with a nice big mouth and some spooky eyes.

I wanted to up the weirdness a little so I raided our hosting supplies and used toothpicks for teeth on this first one.

Next up were the miniature squashes, and for these I went Warhammer themed, with a Nurgle and Blood Angels symbol carved in to the flesh. Deep enough that they’ll glow with some light but not so deep I punched through anywhere. This was my first time doing a carved image instead of full cuts and I’m pretty happy with the results!

I carved these Turnips. Traditonally, root vegetables were used for Jack-o-Lanterns in Ireland and Britain. Pumpkins are native to the new world, and it wasn’t until immigrants came to the United States that they started using them. These are the biggest turnips I could find in my patch! The variety of the red one is Scarlet Queen, which makes for a nice Jack-o-Lantern with its red skin and white flesh. To carve these I first cut off the top, similar to how you would a pumpkin, only I had to cut through the solid turnip to get it off. Then I carved out the middle using a kitchen knife and a potato peeler. I wasn’t easy, but with a lot of criss crossing cuts at different angles I managed to carve out a decent hollow space. The potato peeler was used to gouge out chunks of loosened turnip. Then I cut out the face. In hindsight it may have been easier to cut out the mouth first and have the bottom of the cavity already loose. Something to try next time! 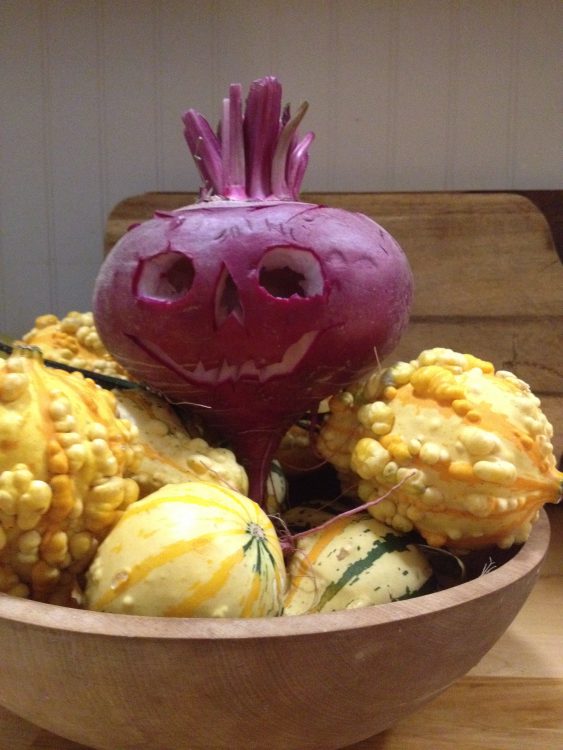 Templates are for cowards. I’m not going to lie – the backside of this jack-o-lantern has a failed template on it that I tried to follow which looked like complete garbage with the pen. The result below was just a freehand design I drew on with a sharpie. The hardest part by far when carving is the mouth – be sure that when you’re carving out is going to be what comes out. My wife and I bought a little cheapo carving kit from Home Depot. I really like using the small serrated carving knife because it allows for more control and tighter curves, even if it does take a little longer to cut out the design on larger pumpkins. When you’re carving and pushing out sections in the teeth area, if any of them happen to fall out you can save them and put them back in with a toothpick!

Last tip: when you’re scooping out the pumpkin guts, be sure to not throw away the seeds from all 3 pumpkins you just carved out that your wife specifically said she wanted to salt and roast. Happy Halloween!

So in our area, Pumpkins were in fairly short supply this year. Thankfully, our local stores got in some of those mini-pumpkins you see occasionally, which gave my partner, Elly, an idea to paint her own Among Us themed Pumpkins. While I can only claim to have contributed here in the minor ways (I bought the pumpkins and primed them), everything else is her, so take it away!

Elly: Hi there! I’m Elly! I’ve recently been super in love with Among Us, and when I saw these little pumpkins, I knew I just had to try doing something creative with them, especially since we weren’t going to be able to carve any this year. I’ve been wanting to try my hand at some crafting since I’ve been stuck at home so much these days, so I relied on getting Kenji to help me get started on this little project.

Kenji: I actually did this part, and used some gray spray paint I had lying around. I’d probably recommend using anything BUT a GW or Army Painter rattlecan here, just because the amount of paint I had to use was actually a lot, and it feels like a bad deal to paint it using something fairly expensive. You just want to make sure you coat the whole pumpkin and get a nice smooth coat. After priming, I used some Mechanicus Standard Gray to paint the bottom, which had stuck to the cardboard I used, just to seal it, and touch up any chipped areas.

Elly: These paint names are hilarious to me.

Kenji: Try writing a how to paint guide and tell people to use “Screamer Pink” in a serious tone.

Elly: I don’t really do a whole lot of miniature painting, so I just used artist grade acrylics that we picked up from a local art store. All of them were heavy body acrylics, and the process involved me mixing the paints with white in a lot of cases to get the right colors that I wanted. This was actually my first time using a wet palette, as all my previous painting experience was with watercolors. I have to say it was a lifesaver on these pumpkins, because they required a LOT of paint, and I was surprised at how long it would take the acrylics to dry on the palette. It really was a great investment, so I see why miniature painters like to use them so much.

I wanted to paint 3 pumpkins of my favorite Among Us colors, Purple, Pink, and Green. The pink that I got was not glossy, and actually matte, which is why that one looks a little different, maybe even a little sus…

Elly: The shape of the pumpkins helped provide the shading that the characters normally have, although again it is a little less noticeable on pink, due to the matte nature of the paint.

Elly: From there, I used a thick black outline to make the visor, which I painted first with a light aqua blue acrylic. I then added in the white highlight for the reflection on the visor, but I was stuck on how to get the right shaded effect on the bottom, so I used, uh… Stegadon Scale Green?

Elly: Anyyyway, I used that and mixed it in with the aqua color and was able to get the shade that I wanted, giving the visor the illusion of being rounded!

Elly: Overall I really love how these came out! They’re currently adorning my desk, and using the magic of photo filters, I even gave them a little space backdrop on my twitter. So, if you weren’t able to carve any pumpkins this year because everything is on fire (literally and figuratively!) you can always paint yourself some little buddies to decorate with too! Thanks for letting me drop in and talk about my pumpkin pals!

Elly: I don’t even know what that means, but okay.

I went with the classic look and just followed the instructions on the box. Clean cuts and triangular shapes to make things easy. 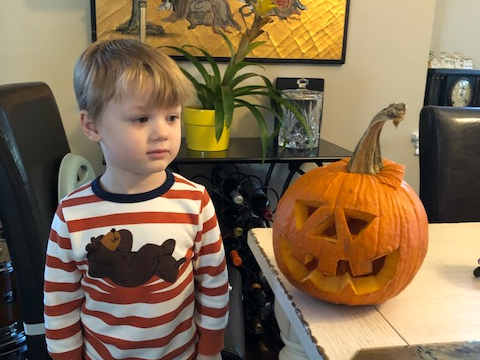