How to Paint Everything: Craftworld Alaitoc

In our How to Paint Everything series, we take a look at different armies of the Warhammer universe, examine their history and heraldry, and look at several different methods for painting them. Today we take a look at the Craftworld Alaitoc, a craftworld devastated by Tyranid Hive Fleets and whose forces now consist more of the dead than the living.

Situated deep in the Ultima Segmentum in a region of the galaxy that once held the heart of the ancient Aeldari Empire, Alaitoc is one of the major Eldar craftworlds and a bastion of the dying race. The Eldar of Alaitoc are borderline fanatical when it comes to their abhorrence and the fighting of Slaanesh, and in order to ensure that they don’t fall to the more depraved tastes and obsessions that led to the god’s birth, they pursue a life of almost puritanical devotion to the paths of the Aspect Warriors. This makes them the weird uptight puritans of the Eldar race, and they’re known for their insane levels of focus and losing themselves as they pursue their warrior paths.

Alaitoc’s dark blue camo scheme isn’t just for show – the Craftworld is known for its use of Rangers, sniper-scouts that act as forward recon and assassins on the field of battle. Alaitoc Rangers are called the Starstriders and rather than stay on the craftworld they travel the galaxy (but remain loyal to their craftworld). The most famous of these is Illic Nightspear, a Ranger with unrivalled knowledge of the Webway. They also tend to field more Exarchs, since the inhabitants of Alaitoc are weird obsessives who are more likely to follow a path until they achieve its apex. Most of what the Imperium knows about the Eldar comes from Inquisitors torturing Alaitoc Starstriders, and this brutal treatment has led to an ongoing war between the Imperium and the Craftworld.

Recently Alaitoc has taken to warring against the Necrons of Immotekh the Stormlord. They won that engagement and since have been working to scour the galaxy of the Necron menace, destroying entire dynasties as they’ve reawakened from eons of slumber.

The literature around Eldar is surprisingly thin for a faction as old and integral to the 40k storyline as they are. Alaitoc have some mention however, and being more involved with fighting the Imperium has its benefits. On that note, if you’re reading about Eldar, there’s a good chance you’re reading something written by Gav Thorpe. He’s a previous codex author, having worked on some of the faction’s more reviled books, as well as Path of the Eldar, which follows three warriors from the Alatioc craftworld as they become embroiled in a conflict with the Imperium, and Shadows of Heaven, which sees the Eldar of Craftworld Alaitoc go up against the Black Legion’s chaos space marines.

Alaitoc are a craftworld you just don’t see on the table very often. Well, that’s not right. You see their rules on the table all the time. Pant schemes for them? Not so much. There’s a little yellow to worry about with Alaitoc but the primary trick you’ll need to figure out is how to do the blue camouflage parts.

Alaitoc were a craftworld I hadn’t given much thought but when the project came up to do a How to Paint for each craftworld, we found we had lots of custom craftworlds and Biel-Tan players among the Goonhammer crew, but nobody had really painted Alaitoc. So I decided to step in and fill the gap and try my hand at the scheme. I’ve done camo stuff before, and I’m no stranger when it comes to freehanding designs, though camo patterns give you a lot of  leeway to work with – if you can paint some blobs, you’re all set. I went with a jetbike for this paint scheme because that gave me a large area to work wtih that would take to the camo scheme very well. Note that I only use brushes for my painting – no airbrush required. 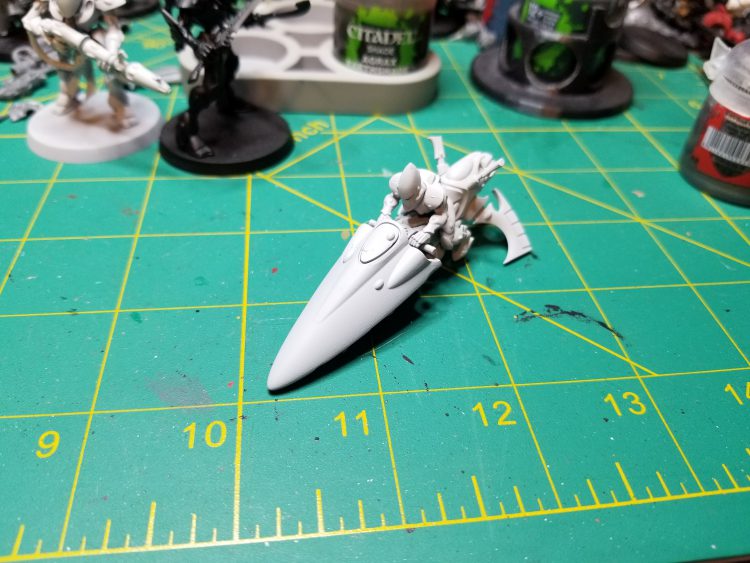 Because my Alaitoc are going to be a lighter blue, I went with an undercoat of Grey Seer, but they could have probably been undercoated black if i’d felt so inclined. 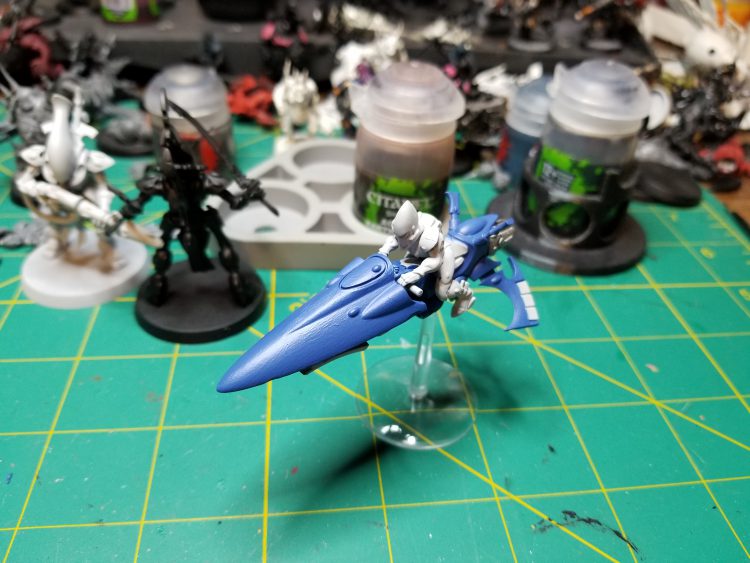 Time for the Basecoat. I started with Altdorf Guard Blue. The metal bits are Leadbelcher. 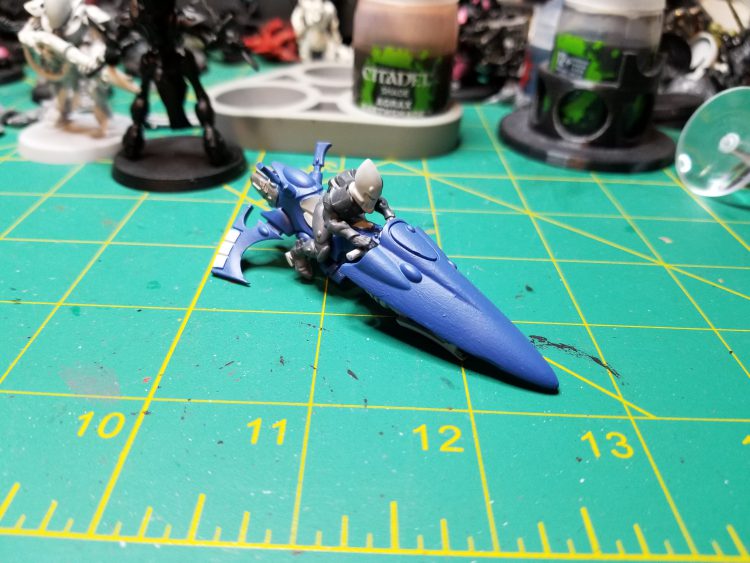 Next up is the rider, who gets a coat of Mechanicus Standard Grey as the base color for the armor. The underside is more of a bone color for these guys, so I paint that with Karak Stone. I’ll edge highlight it later with Reaper Polished Bone but otherwise I’m not spending a ton of time on it. 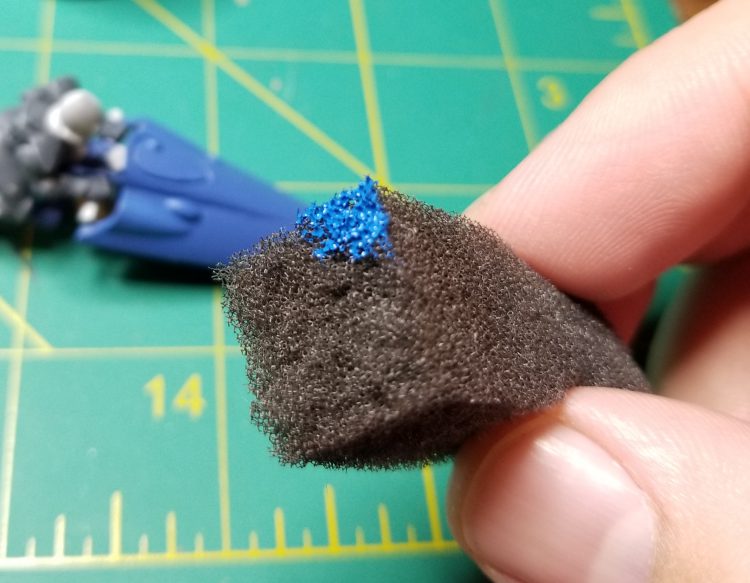 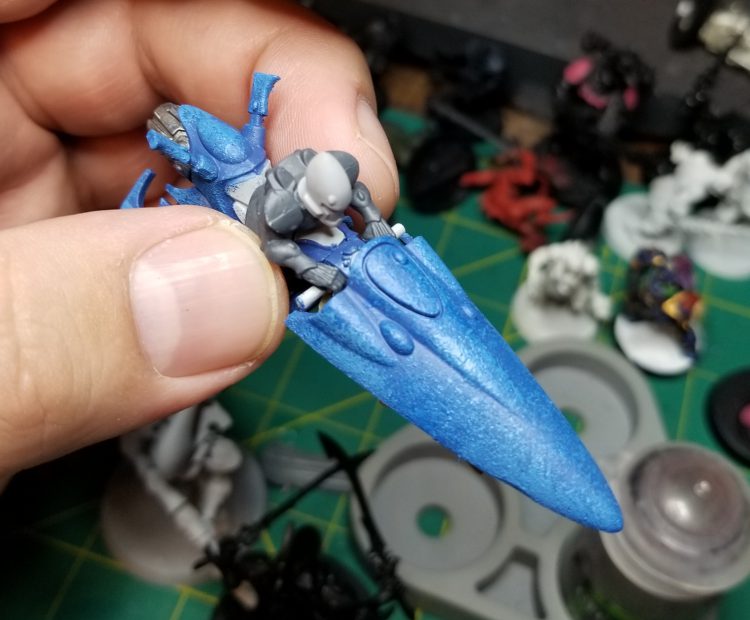 Now for the fun part. I’m applying a stipple texture to the body of the jetbike that I’ll cover over later with camo-like blobs. For this I used an old piece of pickfoam, dipped it in Caledor Sky, and then splotched that all over the bike. Then I came back and did the same thing again with Lothern Blue, working to create certain “pockets” of a color. This ended up giving the bike a textured surface, so just a head’s up there. 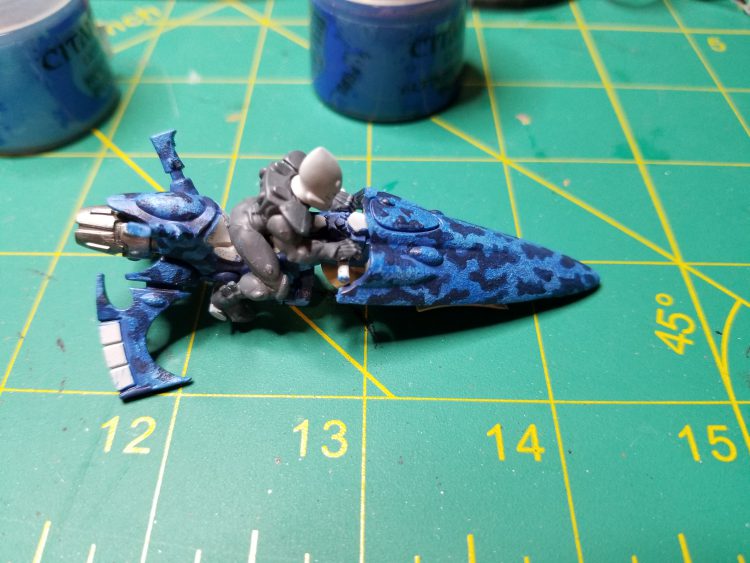 Now it’s time to paint the blobs over top of that. These are just freehand blobs painted with Night Lords Blue. It’s appropriately dark and matte-like. At this point I was pretty happy with the way things were turning out. 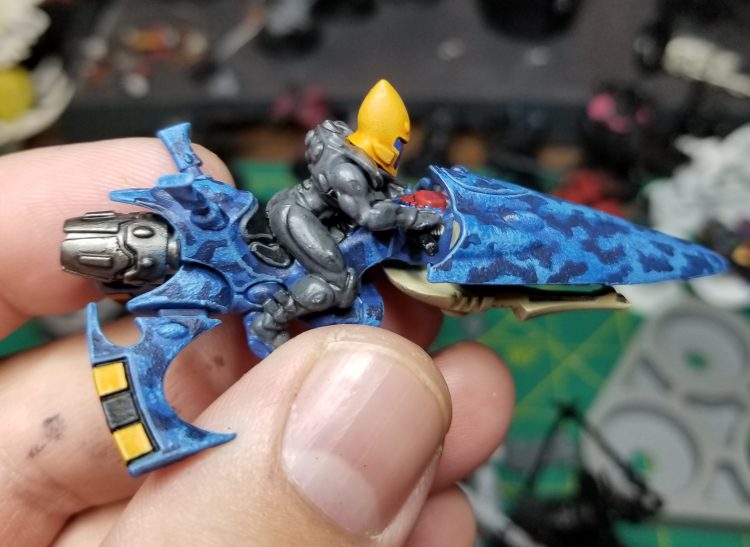 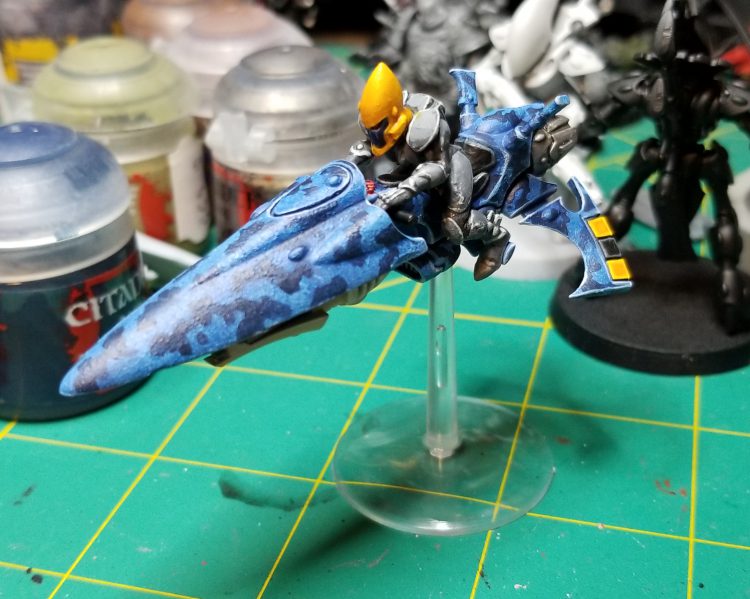 The eyes get a spot of red and I do edge highlights with Reaper Snow Shadow and Reaper Ghost White at the very edges. This really helps some parts pop. The Guardian Armor gets an edge highlight of Celestra Grey. After that the only thing left to do is apply the transfer. The end result is one I’m pretty happy with – the scheme is very striking and the spongework is doing a lot of heavy lifting here.

You could be forgiven for not actually being able to remember what Alaitoc’s colours are, given how many Eldar armies of all schemes were run as “Alaitoc” after the 8th edition codex arrived; even ignoring that, between Aspect Warriors having their own schemes and Alaitoc being heavily-aligned with Rangers, the actual Craftworld colours only showed up somewhat rarely. I certainly had to go and look it up.

The scheme itself is an interesting one; blue and yellow is a natural combination that looks great, and Alaitoc takes it a step further by having a kind of camo-style blue to their scheme. To me this looked like an excellent chance for some sponging; starting with a base of Kantor Blue and then Caledor Sky to build up the medium blue base, I then sponged on a couple of different blues including some more Kantor, some Teclis, and some Altdorf Guard. This gives you a nice mix of different blues that give the main bodysuit some depth.

For the yellow helm, I worked fairly simply – a couple of layers of Averland Sunset for a base and then an Averland Sunset/Flash Gitz Yellow mix. The bone guns are just Rakarth Flesh and then Ushabti Bone, with a little Seraphim Sepia in the recesses around the various nubs. Eyes and gems are picked out in Khorne Red -> Mephiston Red -> Wild Rider Red, with a little white for the points of light. That’s basically it, besides colouring in a few bits of grey on the ammo feeds – a nice simple approach to Alaitoc which should be fast to get on the table when you’re burning through blocks of Guardians or Wildriders!

Alaitoc have a pretty cool paint scheme and they’re absolutely under-represented on tables. Hat’s off to you if you’re reading this with the intent of painting up an Alaitoc force. They’re a cool faction with some of the better fluff and Black Library representation, and they have designs that are bright and a bit garish, but easier to paint than you might think. Hopefully this guide gave you some ideas for your own approach. As always, feel free to send any questions or feedback to contact@goonhammer.com.