How to Paint Everything: Drazhar

In our How to Paint Everything series, we take a look at different armies of the Warhammer universes, examine their history and heraldry, and look at several different methods for painting them. This week we’re looking at how to paint Drazhar, the Master of Blades.

Drazhar simply appeared one day in Commorragh, entering the Great Shrine of the Incubi and challenging the Hierarch of the Incubi. The Hierarch is the supreme warrior of the Incubi temples; Drazhar killed him in just a couple of minutes. He did not, however, become the new Hierarch himself. Drazhar is a mysterious figure who has never spoken a word since his arrival and shows no inclination to be in charge of anything. Instead he is the sacred Executioner of the Incubi order. He exists to fight and kill and does nothing else. Even the name Drazhar is a ceremonial title; his name, if he has one, is unknown.

That said, there are hints at his identity. Arhra, the first Phoenix Lord of the Striking Scorpions, left the path of the Aspect Warrior after the Fall of the Eldar, and founded the order of the Incubi instead. Though it’s not explicit in the lore, Drazhar was killed in battle against Jain Zar during the events of Blood of the Phoenix; his armour was donned by Klaivex Dara’kinia Thremense, whose body was instantly possessed in the manner of an Exarch taking on the armour of their Phoenix Lord.

Dan is one of our Patrons, and when we saw his awesome Drazhar in Discord we knew we had to ask him to participate in this HTPE! Thanks for your help, Dan!

Finally, the Green Glow. Everyone is excited about this when I show them my Drazhar, so I figured it would be best for me to save it for last. To answer to most burning question: yes that is Tesseract Glow. But theres more too it. To start, I hit the blades with Leadbelcher and the inner runes on the pillar with Retributor Armor. This way the original color of the metals shine through just a hair. Then go to town with Tesseract Glow after giving the bottle a good shake. Don’t let it clump up anywhere of course, but it tends to be more yellow in the areas you want to be brighter and more green in the recesses. Outside of painting it straight on something like Grey Seer, it’s a bit subtle, but we are gonna fix that with some tricks. For the gold, I drybrushed on some Liberator Gold, hit it again with a thinner layer of Tesseract Glow and then just a bit of a Sigmarite drybrush. Gold shines through just a hair this way. Then on both the Klaives and the Pillar, I hit the recesses with Hexwraith Flame. It woks very similarly to Tesseract Glow, but the normally very bright green of Hexwraith Flame actually works perfectly with the outer green areas of Tesseract Glow to make the brighter yellows of that paint more intense. 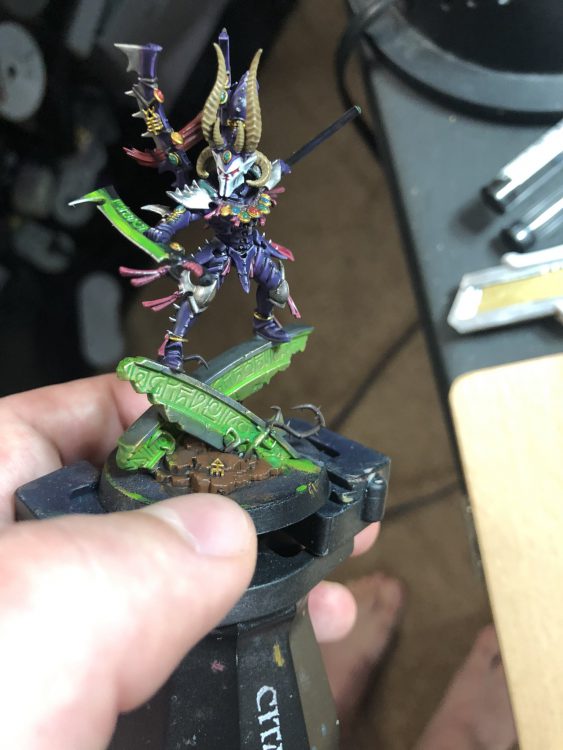 To bring it all together, I did some glazing highlights. Starting with the center of the sword and the runes on the pillar (both the areas I would figure the light would come from), I used Moot Green, then get a little smaller with the highlight and use Flashgitz Yellow, and then finally White Scar at the very center. For a glazing highlight, you basically want to make the paint ULTRA thin on your palette, and then apply very thin layers on top of each other while getting smaller with each layer, so the color will be the most bold in the middle. Doing this with three colors produces a very easy glow effect that’s great for power weapons and the glow lighting. After hitting the edges of the sword with Stormhost Silver and using the Tesseract Glow/Hexwraith Flame combo to give the base a poor man’s OSL effect once the base was finished, we come up with a visually striking glow effect that is honestly really easy to do. Now with the dust settled and continuing to glance over my shoulder at my Drazhar while I type this with a smile, I can say painting him is one of my prouder hobby achievements. I tried some new things with him and he came out incredibly in the end, a fitting centerpiece to my Realspace Raiding force! A few tips to take away from this: 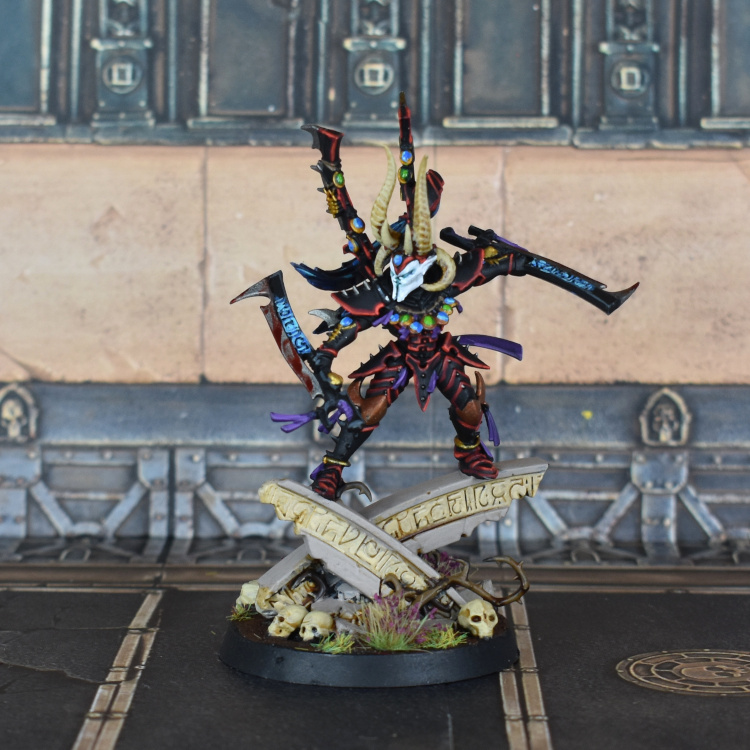 When the Drazhar model was first announced, I took one look at it and knew I had to have it. The character was always cool but the old model was, shall we say, showing its age. The new plastic was a huge improvement, and although I was a little down on his rules at first sight I’ve come around on them since.

I knew I wanted him to be different from the rest of my Drukhari, since the Incubi temples are a separate mini-faction within Commorragh. In the end what I settled on for Drazhar (and for future Incubi) is a scheme which is similar to what I used on a few of my Talos – black armour with a progressive red highlight . This was achieved with VMC Black on the armour itself, and then a thick highlight of Khorne Red, then progressively thinner layers of Mephiston Red and Wild Rider Red.

Unlike Swiftblade who cleverly used modern techniques to do the white on the face mask, I did it the hard way – layering up through greys to pure VMC White. The eyes are Aethermatic Blue washed into the recesses and then a touch of Baharroth Blue, which is also more or less how the glow on the runes worked – though those were Lothern Blue on the black and then Baharroth.

I picked out a bunch of the other details in gold and then hit the gems either Lothern Blue and Baharroth or Warpstone Glow and then Moot Green, and picked the little cloth bits out in Naggaroth Night -> Xereus Purple -> Genestealer Purple.

Drazhar himself largely perches on the Aeldari version of a hero rock, a bit of broken temple, but he has some little branches I picked out in Steel Legion Drab and added some skulls to suit the Executioner of the Incubi Temple. He gained some Blood for the Blood God on his blades, too.

Overall the model is not too challenging at any particular point to paint, but there is a lot going on with it. My suggestion is to make sure you have a plan from the start; the most challenging thing was that I was kind of making it up as I went along and could have done with a little more forethought about how I was going to deal with all the details.

That wraps up our look at how to paint Drazhar. If you have any comments or feedback, or just want to share your own Drazhar with us, then hit us up on Facebook or Twitter or e-mail us at contact@goonhammer.com.