How To Paint Everything: Fallout’s Brotherhood of Steel

In our How to Paint Everything series, we take a look at how to paint different models, armies, and materials, and different approaches to painting them. In this article, we’re exploring how to paint one of Fallout’s most iconic factions, the Brotherhood of Steel.

As some people may know, I’m a bit of a Fallout fan. I’ve wanted miniatures for years, going so far as to buy up some third party “totally not Fallout, guys” minis that are to this day occupying my backlog. When Modiphius started making official models however, I jumped at the opportunity to buy some up. Today I’ll be showing you how I painted mine. All paint colors are Citadel unless stated otherwise.

As with any resin miniature, you should let the parts soak in warm soapy water for about a day and then scrub it with a toothbrush and rinse it off. I usually use a plastic takeout container with enough dish soap to tint the water. This will get any of the mold release agent off. Mold release agent is hydrophobic, meaning paint won’t stick as long as it’s there. 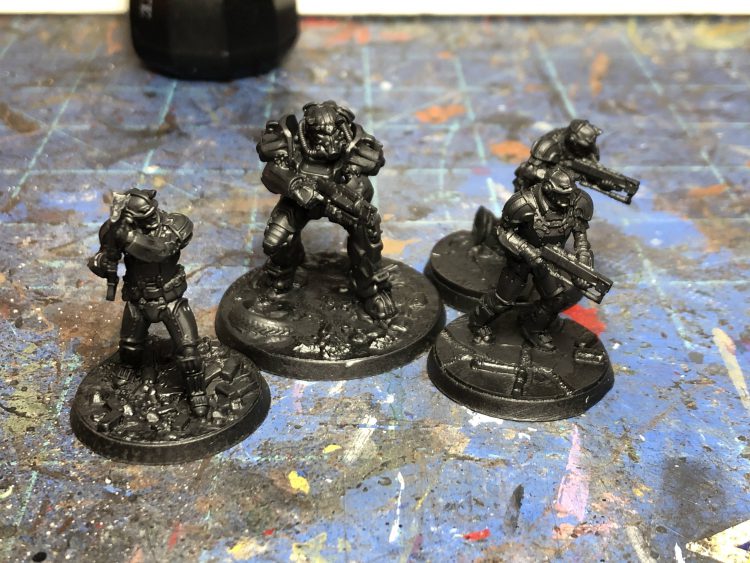 Normally I’d go over the parts of the model one by one, but as the whole model will be getting a wash of Agrax Earthshade, I’ll break it down in a big basecoat step then at the end I’ll summarize with specifics for each color/material. If any details are giving you trouble, just look at the character models from Fallout 4 or 76. The Fallout wiki has pictures of all the outfits too, so you can always use those as reference material. Anyway, here goes nothin! 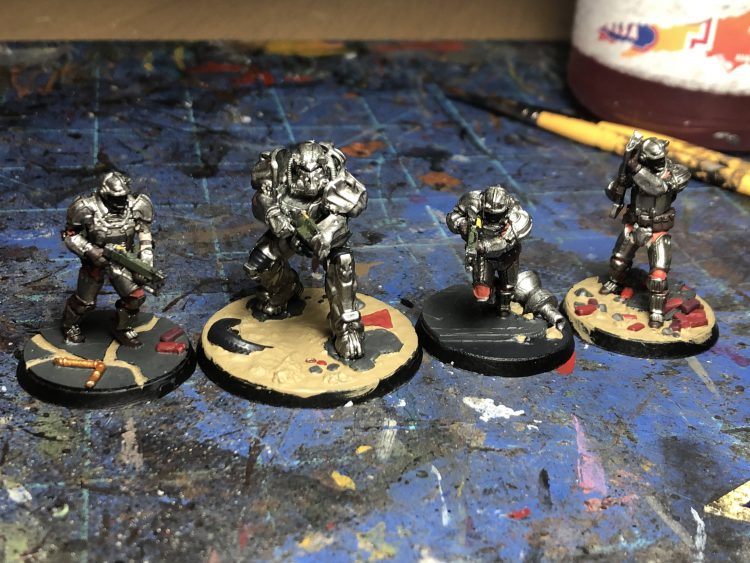 I started with a coat of Krylon flat black spray primer, as the colors are mostly metallics and drabs. I always go over models again with the primer color to ensure I’m working from an even coat, so I used slightly thinned P3 Thamar Black. As it’s best to work from the inside out, I started with all the undersuits. I based these on the Brotherhood Knight Suit as these are, well, Brotherhood Knights. The suit is predominantly orange, so I painted most of the exposed areas in Squig Orange, and the crotch and armpits in Rakarth Flesh. The gloves, boots, collar, and any straps on their armor are then picked out in Dryad Bark for a desaturated leather color. I also painted the pouches and unarmored back of the model with Dryad Bark – the in-game model is a little murky, but the material there is definitely not metal. Check the link above for reference on the specifics. For the power armor’s joints, I went with Corvus Black – it’s dark enough to read black, but light enough you can still shade it. I followed the Brotherhood Knight Paint for reference. I painted the casings of their laser rifles in Castellan Green, and the Microfusion Cell with Averland Sunset, and then painted all the steel parts in Ironbreaker – so the stocks, barrel, and body of the weapons. I also used Ironbreaker for their combat armor and the T-60 power armor. I usually use Leadbelcher to start my metallics, but I wanted a brighter metal to show off all the fine detail of the models. Ironbreaker usually takes two coats to get good coverage for me. There are a couple pipes on the sides and back of the power armor which I hit with Tallarn Sand.

Lastly I slapped some basecoats down on the bases. There’s a lot of bric-a-brac on the modeled bases that you can kind of paint how you’d like, but three textures tend to show up on all Fallout minis – concrete, pavement, and wasteland. I base the dirt with Zandri Dust and the concrete with Skavenblight Dinge. The slightly warm tone of the Skavenblight Dinge makes the concrete feel more dusty and ties it in better with the minis on top, or at least that’s what I keep telling myself. I paint the blacktop of the roads with Corvus Black. Paint any rocks, plants, tires, etc. how you’d like, because we’re going to be washing the bases as well. 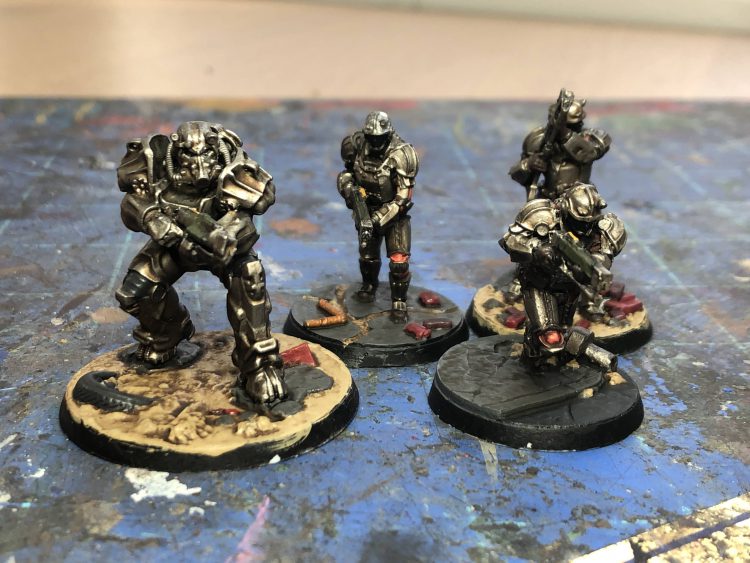 I then covered the models and bases wholesale in Agrax Earthshade to really bring in that “Fallout Brown” color. Everything’s going to be weathered and dirty anyway so this is a good place to start. Give these a while to dry – longer than you’re used to for washing a model. We’ll be back with highlights, finishing touches, and then some. 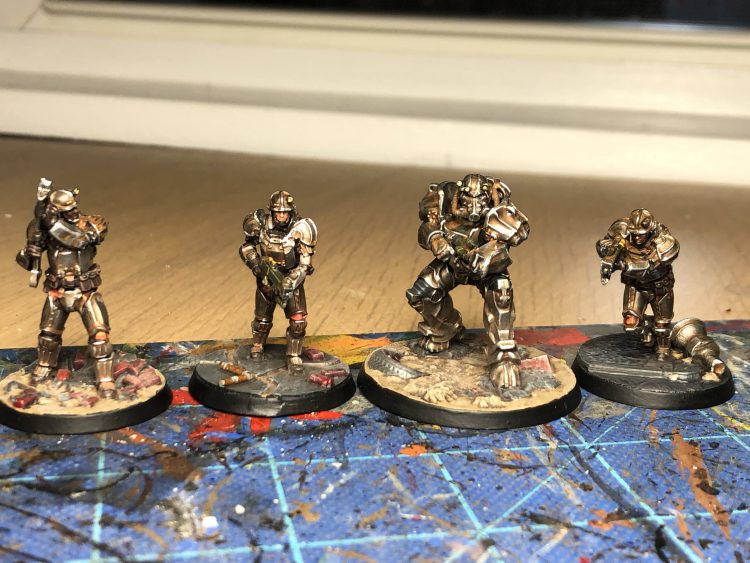 From here it’s going to largely be highlighting, but we’ve got a little weathering to start with. Thinned down Skrag Brown makes for a great rust effect, and I like to apply that with a fine brush to some of the recesses. They don’t need to be everywhere as it could make these guys overwhelmingly orange, but stick to the crevices and around the rivets and you’ll be fine. After all, these guys have decent enough equipment so it’s not going to be totally rusted out. I also tend to concentrate a bit more of this on some of the pipes on the power armor for variety’s sake, and to stick closer to the in-game model. Once that’s dry you can leave as is or hit the edges with some Stormhost Silver highlights like I did.

On the undersuit, focus on the upper folds of fabric and highlight the orange with Fire Dragon Bright and the tan with Pallid Wych Flesh. There isn’t a ton of this showing, but if they release models in less armor it’ll be good to have the recipe down. Highlight the boots, straps, pouches, back detail, and gloves with Gorthor Brown.

The Laser Rifle is next; they’ve all got some variation of it but the same principles apply. You can apply just a little of that same watered down Skrag Brown here but the details are pretty fine so your mileage may vary. Highlight with Loren Forest. There’s also a flashy little stripe on them which I picked out in Averland Sunset. Again, when in doubt, check the wiki for reference. The little Microfusion Cell also got a highlight of Yriel Yellow and a red stripe in Mephiston Red to match the game model.

There are also a couple little details that we can pick out here. I painted all the headlamps on the armor with Dorn Yellow and washed it lightly with Seraphim Sepia. I also picked out the little rank stripe on the power armored jobber with Wild Rider Red. I probably should have done that before washing so I could clean it up easier, but I’m not a smart man. This is again something where checking the wiki for reference will help, as it’s a freehand detail and not something sculpted on the miniature.

The armor and gun follow the same process as the regular joes, but I highlighted up the joints with Skavenblight Dinge for a warm tone. I brought the pipes back up to Tallarn Sand, leaving the wash in the recesses. I also picked out the Brotherhood of Steel icon in Ulthuan Grey. You could use any white, but I went with a slightly off white to make it less stark. I also paint the eye lenses in with P3 Thamar Black, as they’re the one part I’d like to read as cold black. Some people go for a more theatrical lit up look, but this reflects the in-game model pretty well.

Faces are my favorite part of most any model, and here is no exception. This is the only part not washed Agrax Earthshade so I saved it for last. I did 3 different skintones as the world is a diverse place, apocalypse or not. I based them with Cadian Fleshtone, Catachan Flesh, and Knight Questor Flesh respectively, then washed them all with Reikland Fleshshade. At this point I painted the eyes in P3 Thamar Black, and dotted in the corners with a fine brush and a pure White Scar. I highlighted them all back up with their base colors, then gave them a final highlight of Kislev Flesh, Bloodreaver Flesh, and Cadian Fleshtone respectively.

Drybrush the concrete and blacktop with Dawnstone and the dirt with Ushabti Bone. Pick out the specific details as you’d like, but you’ll probably end up with a Nuka-Cola bottle on a base or two. I paint these with a 2:1 mix of Rhinox Hide and Khorne Red to get a nice ruddy brown, then just cover them with ‘Ardcoat gloss varnish for a glassy sheen. Easy!

This is optional but I like the look of weathering powder around the feet of my Fallout models. Less is definitely more here, but I use Secret Weapon Miniatures’ Clay Brown weathering powder around the feet and sometimes on some of the junk on the bases. I’ll often use their Exhaust Black powder on any shellholes or craters as well, or just to add some variation. You could drybrush these if you wanted to but I like the ultramatte effect of powders. Lastly, tidy up the base rim with your color of choice. I like P3 Thamar Black for this, as the cold, pure black stands out against the dusty colors of the finished models. Just be sure to varnish if you’re using weathering powders. Honestly, varnishing is just a good idea anyway, as the paint will rub off the base rims over time. I use Testors clearcoat but any matte varnish will do.

Now for the finishing touches! I glue on just a little dead grass – any make will do but I have a pot of Galeforce 9 dead grass I’ve been using for a decade now. Just be sure to varnish before applying any static grass as the fibers can catch the varnish and it’ll look weird.

As promised, here’s all the recipes I used in an easy to read format.

Thanks for dropping in! As always if you have any questions or feedback, drop us a note in the comments below or email us at contact@goonhammer.com.