How to Paint Everything: Samurai

In this week’s Goonhammer Historicals, we take a look at how to paint samurai, the iconic armoured warriors of Japan.

The iconic samurai warrior is the armoured soldier of the Sengoku period. They are known in the west for the sets of swords that they carried, but in battle their armament was more varied. This was primarily to overcome the armour of their foes, and so spears, heavy swords, and other weapons were not uncommon. Archery was also practised by the samurai, and so skill with a bow was sometimes exercised on the battlefield.

The elegant armour that is iconic to the samurai was made of many leather or iron plates or scales, connected together by silk cord or chainmail, with larger central plates to protect the core. This allowed for a surprising freedom of movement, but it was complex to make and expensive. As such the armour of these warriors was treated with care and even reverence, and decorated in lavish ways, usually with lacquer which helped preserve the armour from the elements as well as improving its appearance. The colour of this lacquer was usually black, red, green or dark blue, though the warriors themselves would often have more varied colouration thanks to silk garments, additional armour parts or even gold leaf.

For this week I painted a Warlord Games plastic samurai, arming them with a katana held two-handed and choosing a pretty iconic armour style. I decided I wanted to go for something bright and bold, and after looking at some source pictures opted for a vibrant red armour. My goal here was not to fully detail the armour and trimmings, but instead to give a strong impression when fielded in massed units. 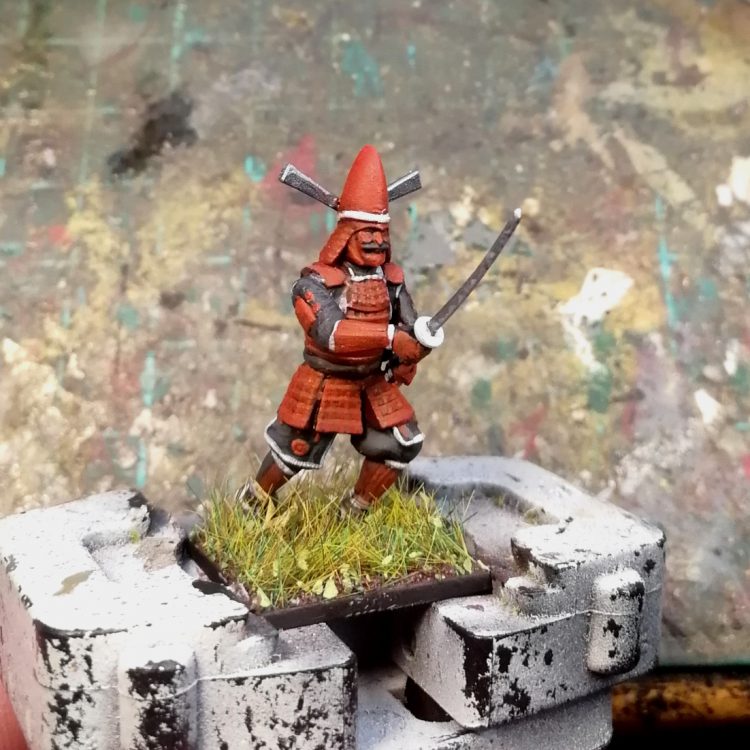 I started with a white prime, then went with the following basecoats:

These basecoats in place, I washed the entire miniature in a black ink wash (I used Scale75 Inktensity Black, but any black ink will done), thinned roundly 1 part ink to 3 parts water. When completely dry, I carefully drybrushed the lacquered armour with Blood Red and then Scale 75 Antares Red, and finally Scale75 Aldebaran Red. This done, I retouched the Black Grey before highlighting a single step with a 1:1 mix of Black Grey and Vallejo Neutral Grey. Finally I retouched the Silver Grey areas, and highlighted the steel with Scale75 Heavy Metal.

This was a quick and easy paintjob, which you could do really fast in large numbers, perfect for mass battle wargames.

After giving my models a black and white zenithal prime to make all the detail obvious I began basecoats, the first of these was for the armour plates themselves, these were traditionally lacquered in one of 3 basic colours Black, Red or Brown, so I started by painting each of my samurai’s armour in one of those randomly with a Focus on the Browns and Blacks. I also did the swords handles and their sheaves at this stage using the same colours but again, randomly distributed.

Of special note, two of my models are wearing Jinba coats, while they were apparently sometimes in bright colours, with reds, oranges, yellows etc. but I decided to do them with a basic brown, keeping them fairly in keeping with the rest of my models while still making the two wearing them nice and visible as I intended to use these as characters

Next I did the clothing and arm protections, providing them with a random mix of colours, mostly keeping brighter colours to the character type models I did, this helps to make them stand out and look wealthier and more important.

Then I painted the skin with a basecoat of a flesh tone base, in this case Citadel Bugman’s Glow and a quick messy highlight with a mix of this and Vallejo Game Colour Elf Skintone.

For the back banners I did the banner poles in a light brown colours, the actual banners themselves can be done in a whole range of colours and have whichever mon you’d like for the army you’re painting, I split my group in half, doing one with Red and one with Brown in order to be able to use my two groups as skirmish forces against one another. By using the same mon on both I can simply use them as two squads in the same army if I want to play a larger game.

Once all these base coats were done I washed the whole model with Army Painter Soft Tone and re-highlighted all these back up to their original base coat colours. I also painted the swords and spear tips with Citadel Leadbeltcher and a quick highlight on the tips of army painter Shining Silver.

Our last step is some highlights and details, so I went in with Vallejo Game Colour Elf Skintone to do an extra highlight on the faces and Vallejo Aged white mixed into a few of the clothing colours for small highlights and finally did the helmet crests with golden colours, I also did two of them with a green crest, although this might be incorrect, I have seen evidence of helmets with the crest lacquered in Red or Black, so it doesn’t seem impossible.

There is also a final optional stage that I skipped on most simply because I didn’t have the time, many samurai have coloured lacing, but after doing one with some blue lacing as a test model I decided that the effort to result wasn’t worth it for myself at the moment, but this can be a good way to make those character type models stand out again. 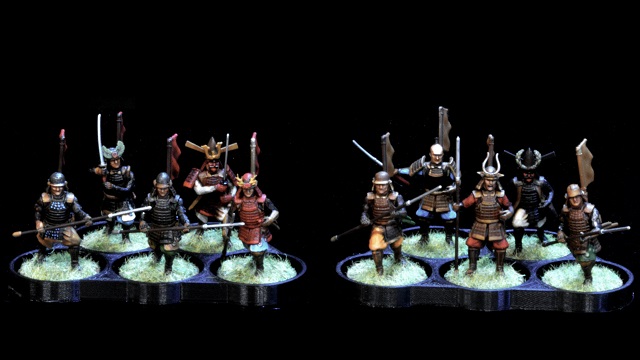 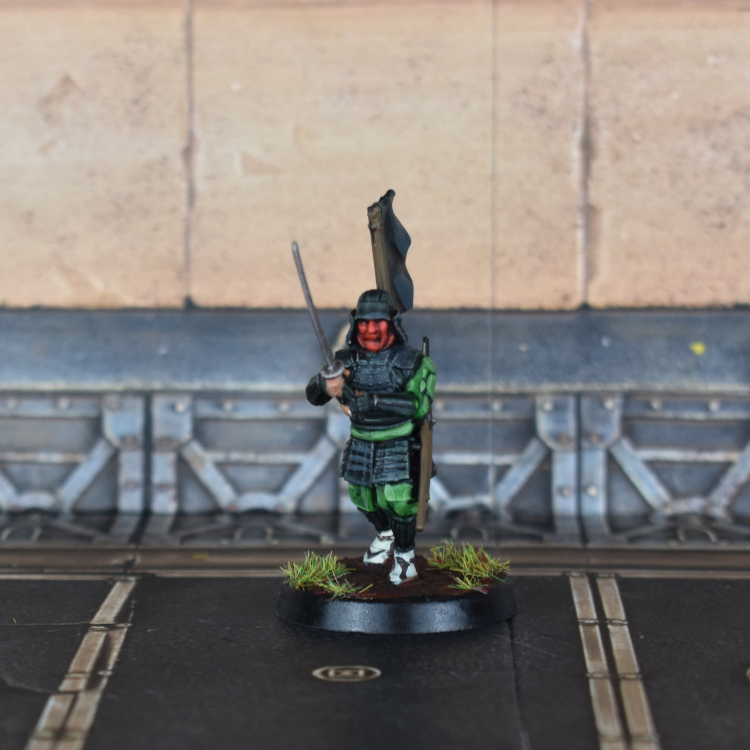 I would describe my samurai here as ‘short and simple’ – I will be honest and say I did not love the model so I wanted to do something simple, basing it on the painted examples on the Warlord Games site. I ended up using Contrast paints from the GW range to get my base layers done, which are nice and simple for getting them down quickly. I did the armour in black and then drybrushed some grey over to simulate the stitching, and did the mask in red – a layer of Blood Angels Red for the base layer, then some Mephiston and Wild Rider Red to pick out the edges.

The green was Dark Angels Green and then Warboss Green followed by Skarsnik Green. After that it was just picking out metals, the cords for the sandals, the skin, and the leather and wood.

I wanted to get my guys painted quickly, as I had an event to go to, so my method is very much what is now called ‘battle ready’ and that basically means looking at something from two feet away, and if it is ok, you’re golden. Macro photography is thus the devil as far as you’re concerned, which is why I cringed a bit at the pictures of these guys.

I painted up the Bandits & Brigands box from Warlords original release (it’s now available cheaper and with more models).

I primed these models a mid grey with spray. Black would have made them too dark, and white too bright.

I selected a neutral and natural colour palette of earth tones (brown, green, sun bleached straw). I went with a dark skin tone befitting people who would spend the majority of their time outdoors redistributing wealth. I used a dark red as a spot colour.

Bases were brown earth, with some rocks and a couple of skulls added to identify the characters by their bases. I am indeed one of those people who sticks rocks to bases, and then paints them to look like rocks.

As ever, when you’re painting a warband sized group, you pick a theme and common colours to tie the group together (though sometimes you may do this with basing if you have a model painted very differently).

Tabletop standard is the impressionism of miniature painting. If you look closely then if looks off, if you step back it looks fine. I don’t need to teach you guys the colour wheel, or seasonal colour palettes, but ronin/bandits/peasants let you off having to be colourful in your paint jobs and let you paint guys who might realistically hand out in the woods and mug people.

Not everything has to be a masterpiece, and I’m happy with these as gaming standard paint jobs.

I decided to paint a couple of figures from the  “Samurai Heroes” by Warlord. These are metal miniatures, mostly 1-2 pieces. The casts were decent though I would have appreciated more careful packing since swords and banners got pretty bent out of shape. The sculpts themselves are fine. They’re certainly characterful poses but the facial sculpts in particular leave a lot to be desired. For this project, my goal was to emulate the box art in scheme and strike a balance between quality in speed. To do so, I essentially picked a single feature, skin, that I would do a full work-up on and then the rest was contrast plus some targeted highlights to accentuate details. This type of approach works pretty well for tabletop because if you pick your detail area right, the viewer’s eye is instantly drawn there and they don’t notice the more sloppy bits.

And that was that, aside from painting the bases a sandy color and adding a grass tuft.

These were quite quick to do, with minimal work after the skin was done, and they look pretty nice on the tabletop.